Today we drove the southern half of the Dempster highway from Eagle Plains to Dawson, YT.  This was Day 6 in reverse. Julie  notes “Just to clarify, we aren’t actually driving in reverse. Although that would add to the excitement around those bends!”  Julie was catching up with her family this morning from the hotel so we got a late start.  She had to use the phone in the hotel room as it is the only viable communications method from that location.   It was -26C with some serious wind chill.  I got really cold standing on the roof holding a coat hanger up in the air for an antennae. 😉  Julie notes  “We also talked him into wearing a tinfoil hat and standing on one leg.  Reception was great both on the phone and from the few passing motorists.”  It warmed up to a pleasant -4C by the time we arrived in Dawson.

There was some drifting snow in places because of the wind but otherwise the highway was in good driving condition.  Julie notes “iTunes shuffled out ‘North to Alaska’ when we headed out on the Dempster yesterday. Even though we were headed ‘south’ to the Alaskan highway, we sang along boisterously.” 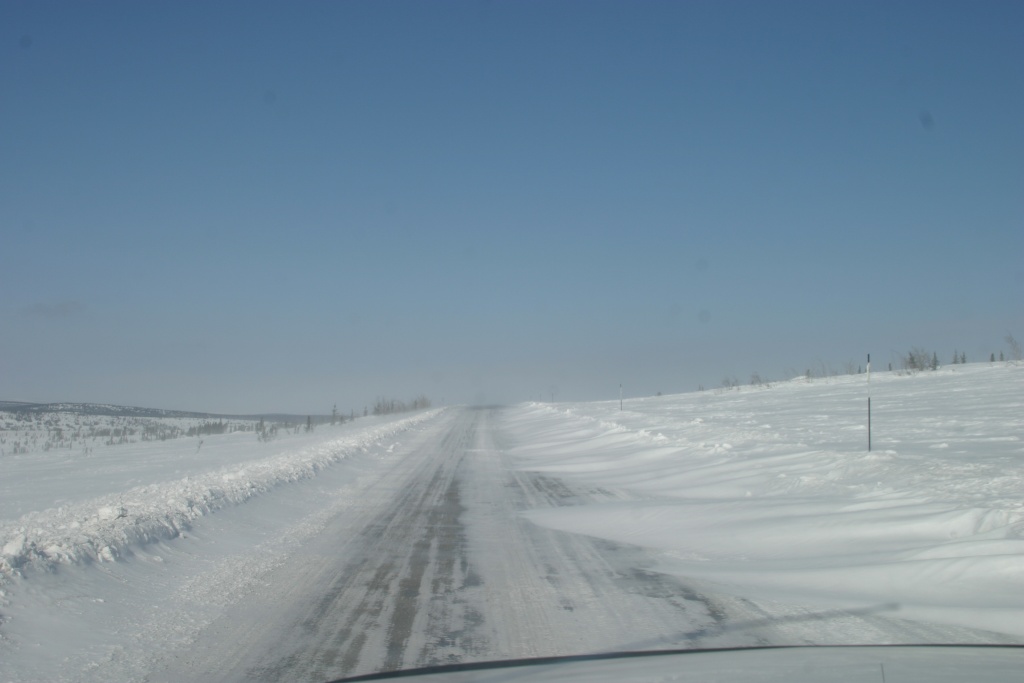 Some more scenery along the Dempster. 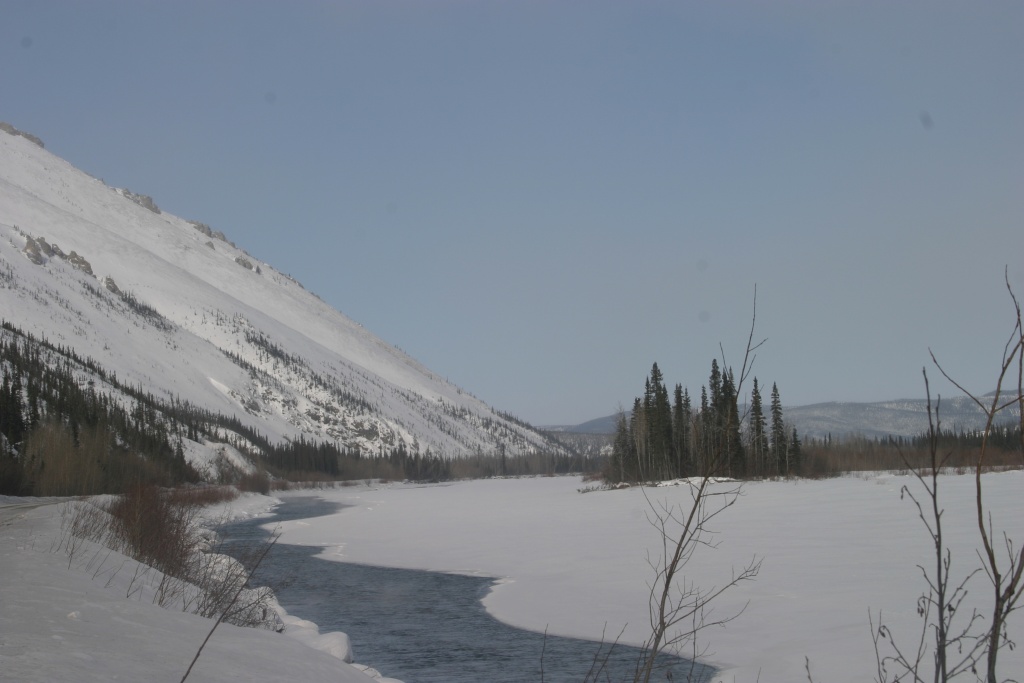 And more splendid scenery along the Dempster. 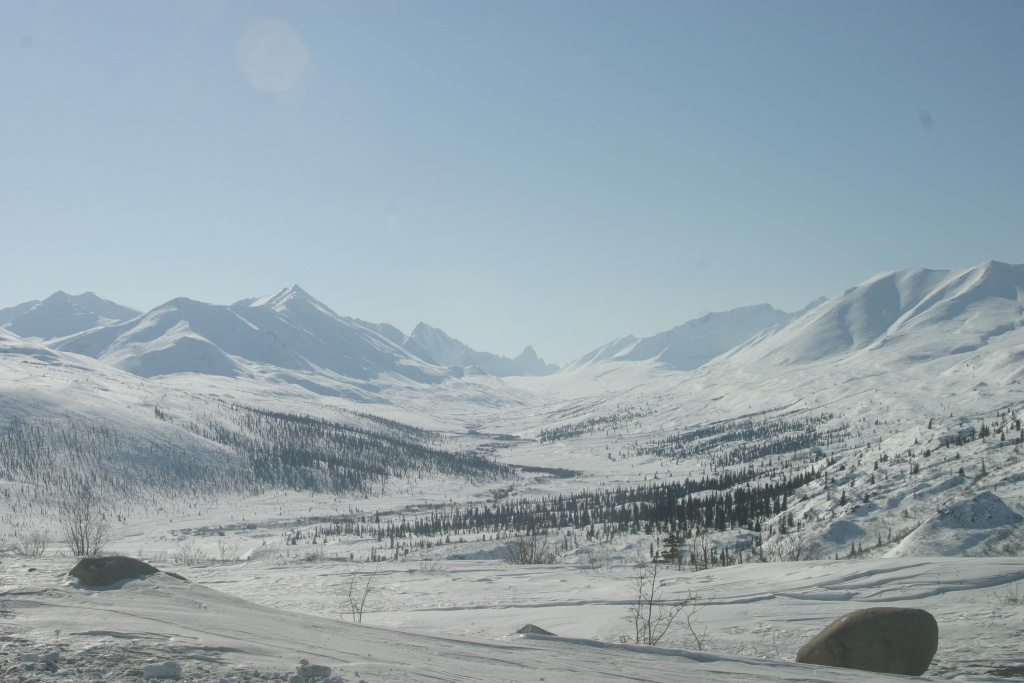 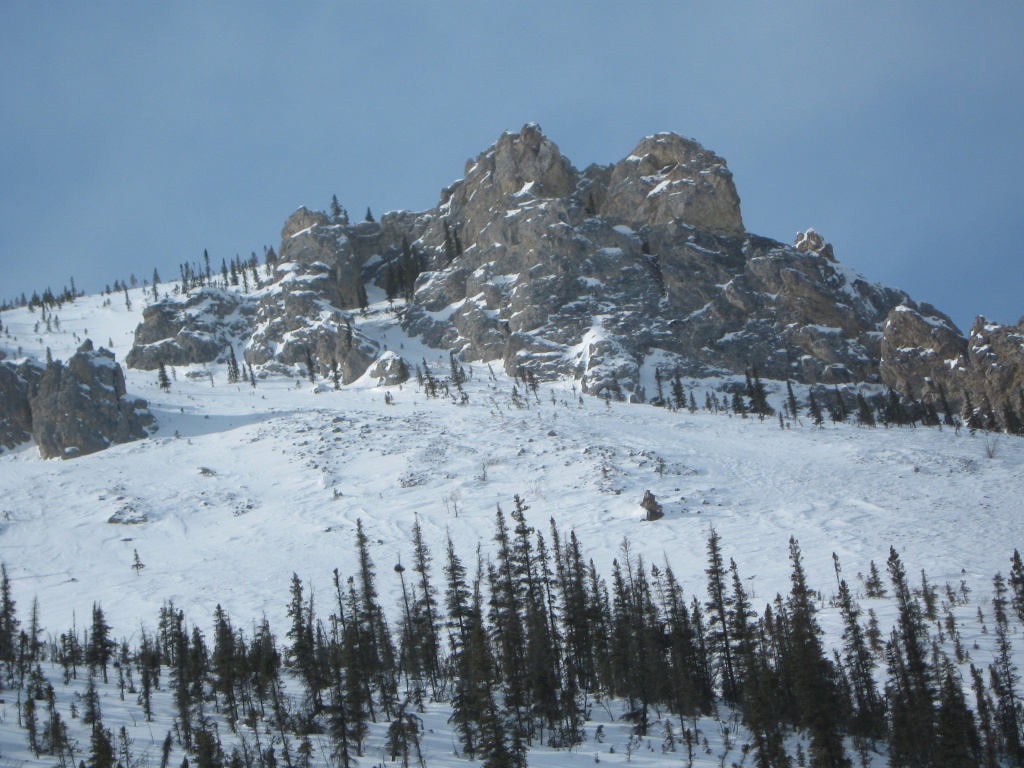 We checked into our hotel, the Aurora Inn, and had a good Skype visit with granddaughter Melodie and her parents.  We then headed out for supper to the #1 Trip Advisor rated restaurant, The Drunken Goat.  I just know Julie will have something to say at this point in the story.  Just a hunch. Julie notes “I think everyone who knows the drunken goat (also known as the old goat, among other things) will be saying the same thing.” 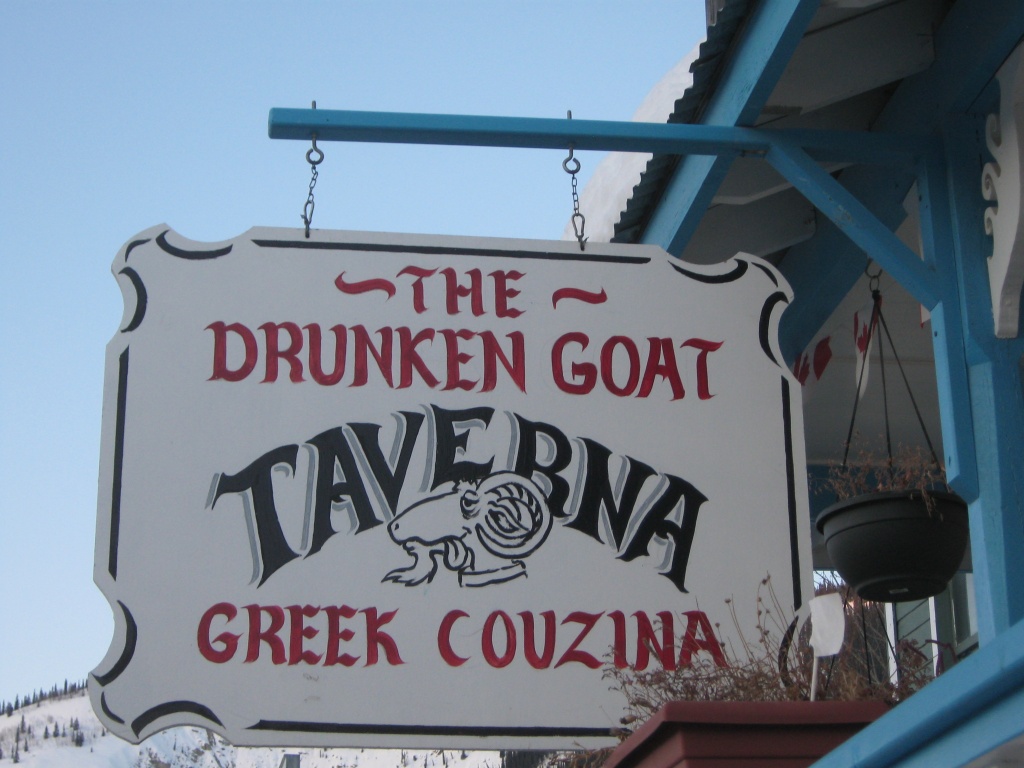 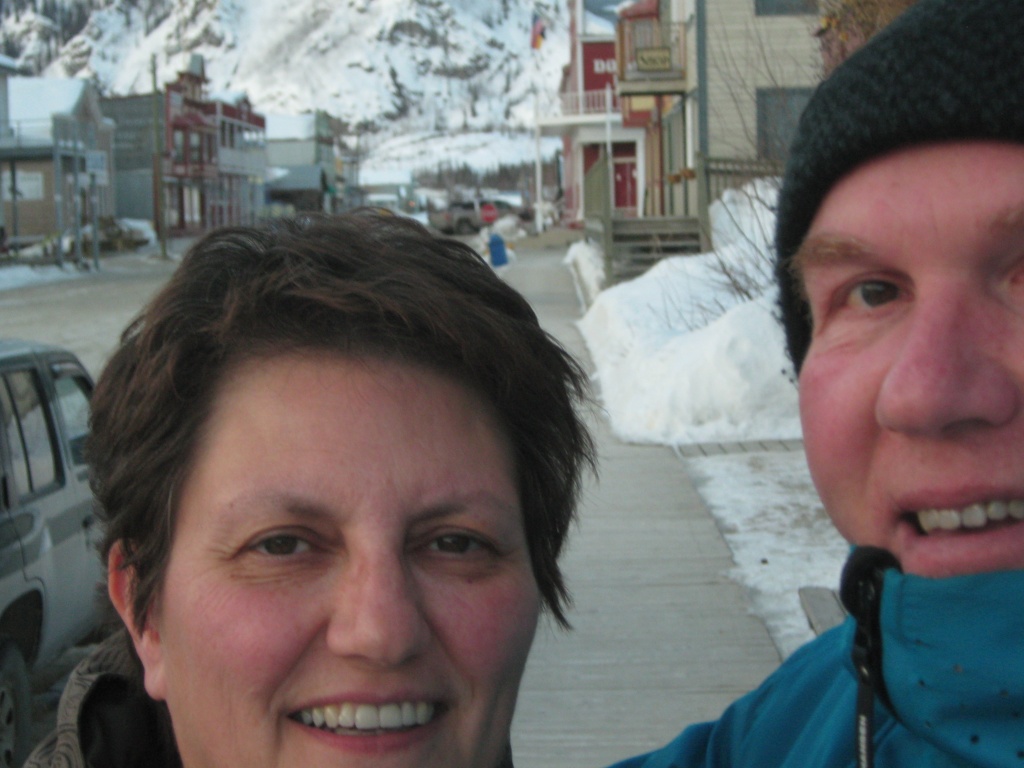 No show tonight?? Julie notes ‘Luckily I travel with my own personal comedy show. And if I want a really good laugh I just need a mirror. What is with my hair in this picture?”

After a good Greek meal, we got kicked out of there to make room for the young crowd and went in search of the white beard crowd. We headed over to Diamond Tooth Gerties to see a comedian.  Wrong.  No show tonight.  Comedian was only on stage tomorrow. 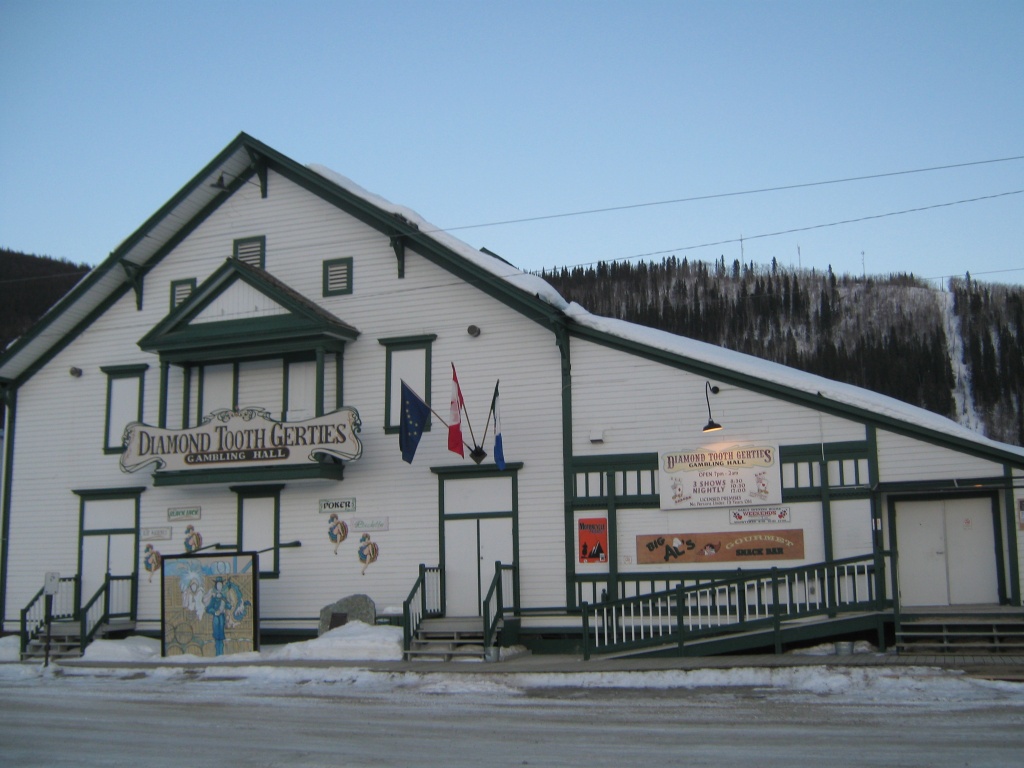 So instead, I lost $20 in 5 minutes on the roulette wheel and Julie was up a whole dollar on the one armed bandit.  Julie notes ” I learned my gambling savvy from Kenny Rogers who told me via the iTunes “You gotta know when to hold’em, know when to fold’em, know when to walk away…”this was also my laundry day anthem.” 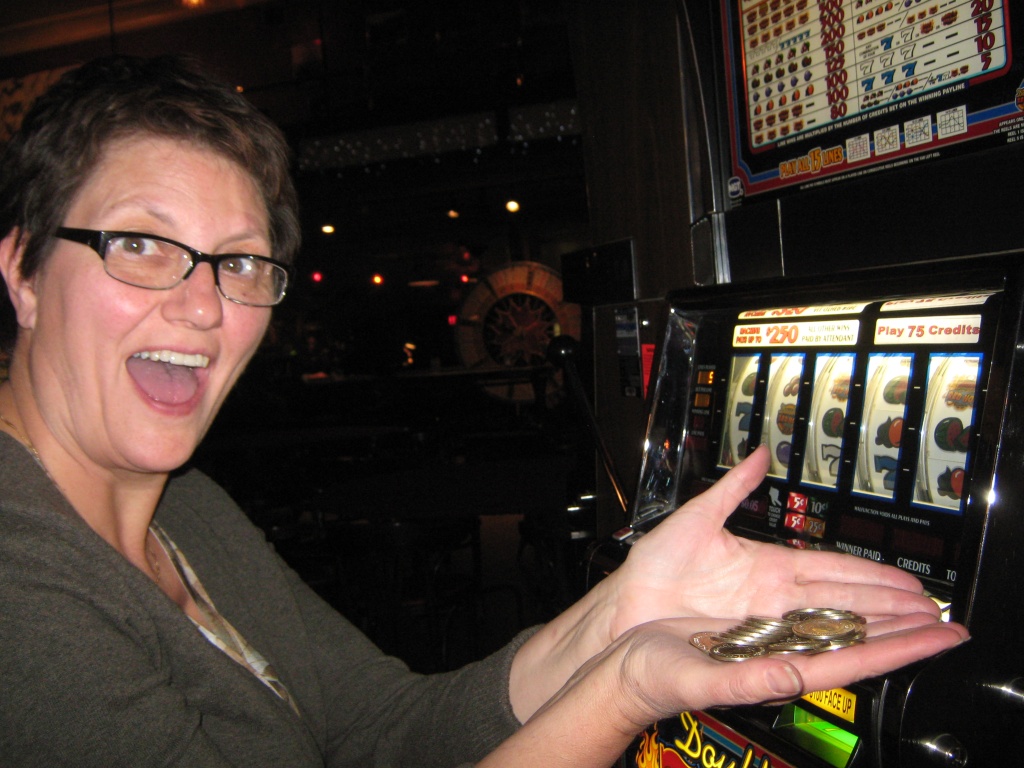 Up a dollar! Quit while you’re ahead they say!

…take care, the muleskinner and his sidekick