We started out the day in Grant Village campground in Yellowstone NP. 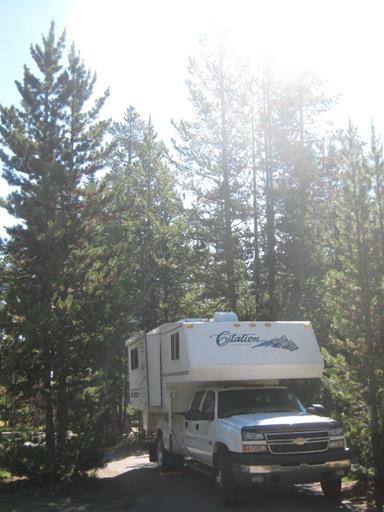 We had a leisurely morning and then headed off to see Old Faithful. It was a 17 mile trip in the wrong direction but totally worth the journey. We followed the boardwalk around a number of geysers in the field. 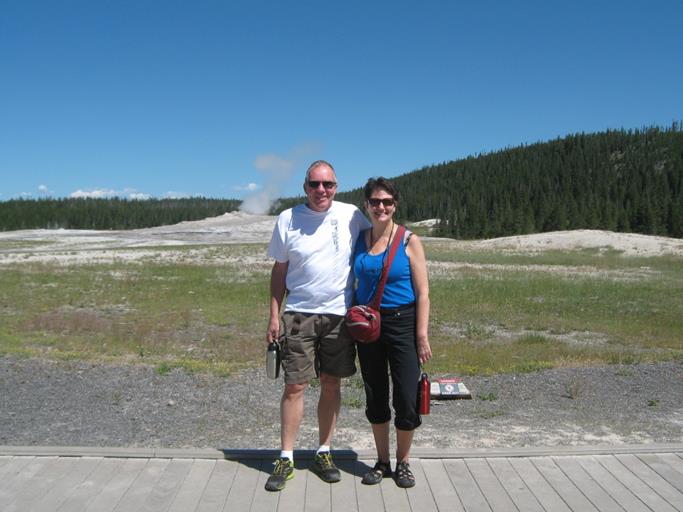 Julie notes “Do you see anything wrong with this picture? Besides the obvious that I look way too young to be travelling with this guy and that the look on my face says ‘these are definitely not travel friendly underwear’. Besides all of that, ‘No Hats, No Sunscreen = No common sense.’ We are a little pink because of that, sunburnt and embarrassed to be sunburnt. The air temperature was around 30C. The ground and water temperature approximately a kabillion C, according to the facts that I read on the signs.” 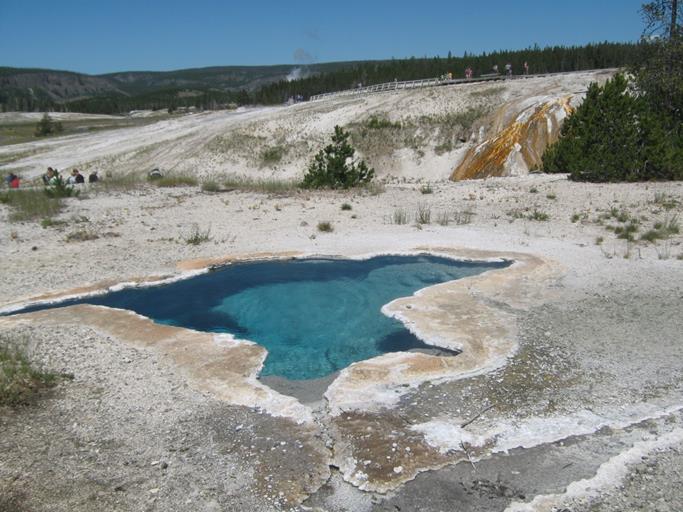 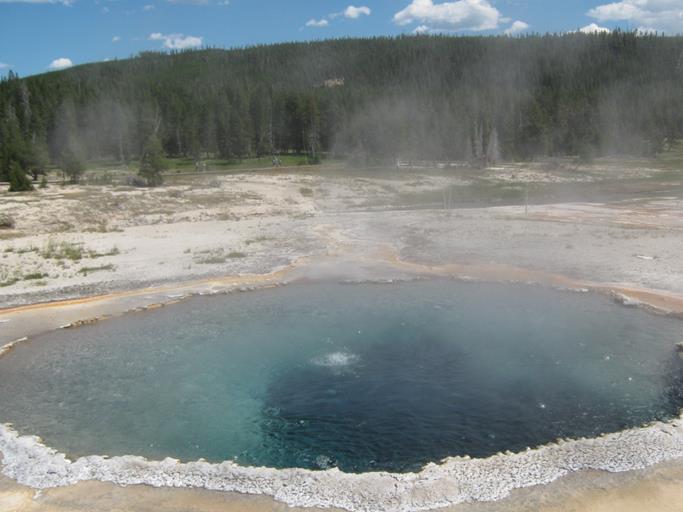 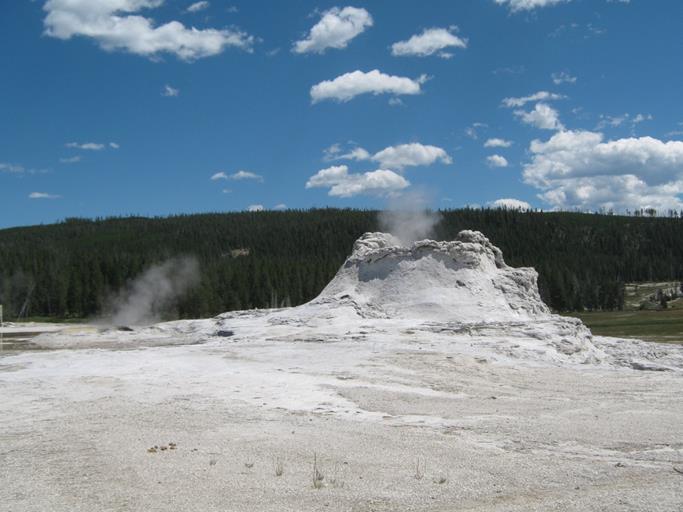 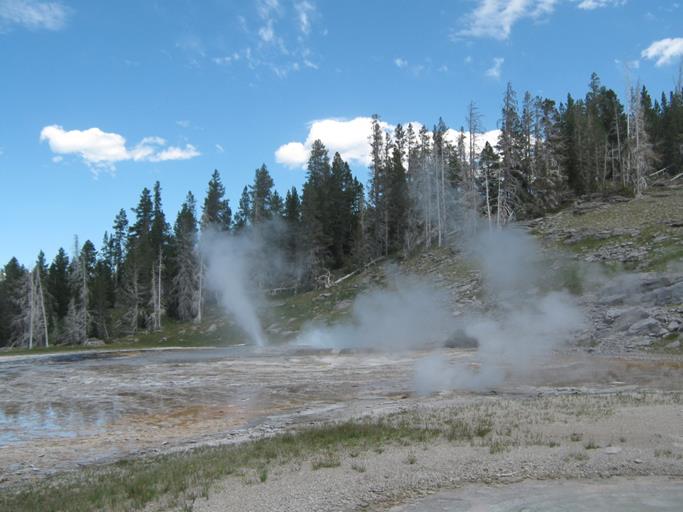 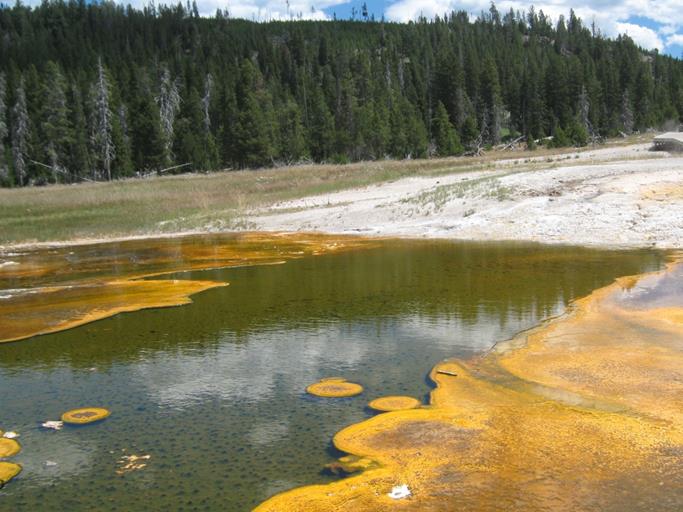 …and finally, Old Faithful erupted almost on time. Julie notes “Yes the unfaithful among us were beginning to doubt Old’s faithfulness. But she did not disappoint. I was glad I hadn’t showered in the morning and was still wearing my yesterday’s old geezer, geyser outfit, because we were treated to a cooling spray as we admired her. But it leaves one covered in crusties and I had a strong urge to make boiled egg sandwiches for lunch.” 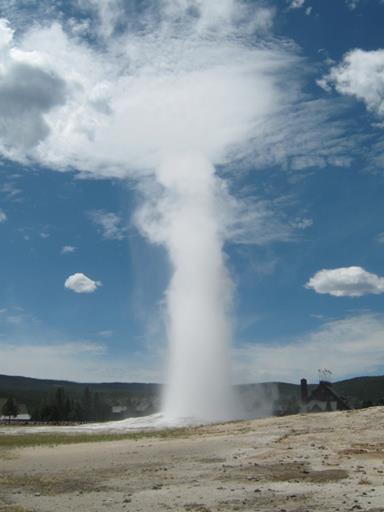 …and the crowds were there to watch. Julie notes “The crowds were huge but it was fun to be part of the build-up as kids of all ages anticipate the show. A group across on the viewing platform broke out into the American anthem, people smiling and discussing the phenomenon. Then there was the hot and crowded parking lot to contend with… But all worth it.” 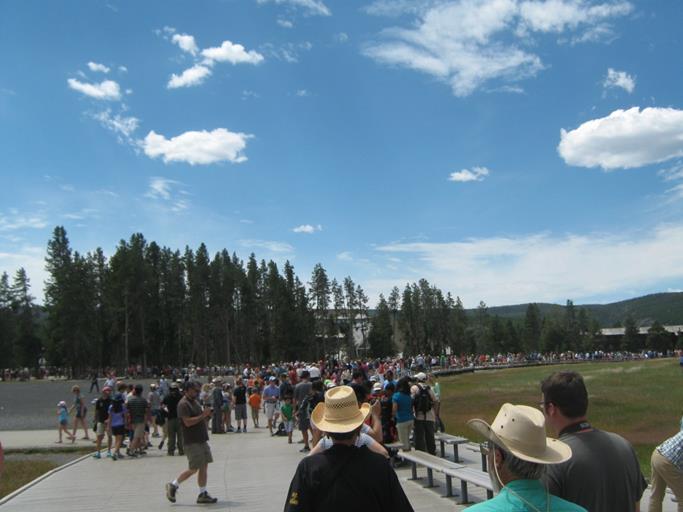 and the crowds there to watch

We then traveled the 17 miles back to where we started crossing the continental divide 3 times on the way. 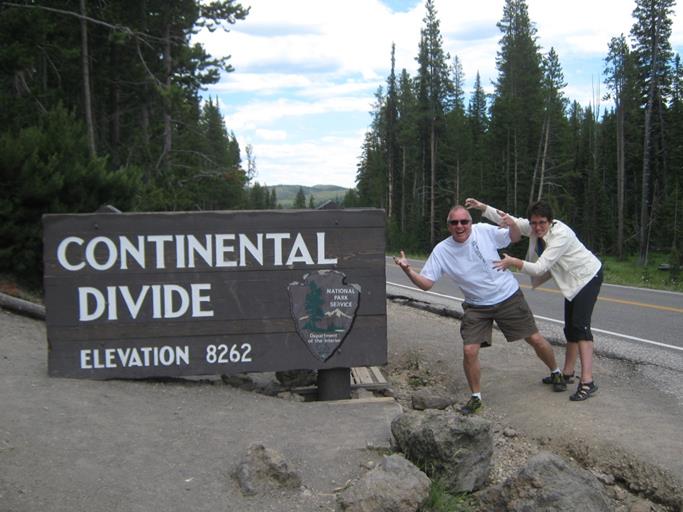 Julie notes “This is what happens when you cross the divide one too many times in one day.” 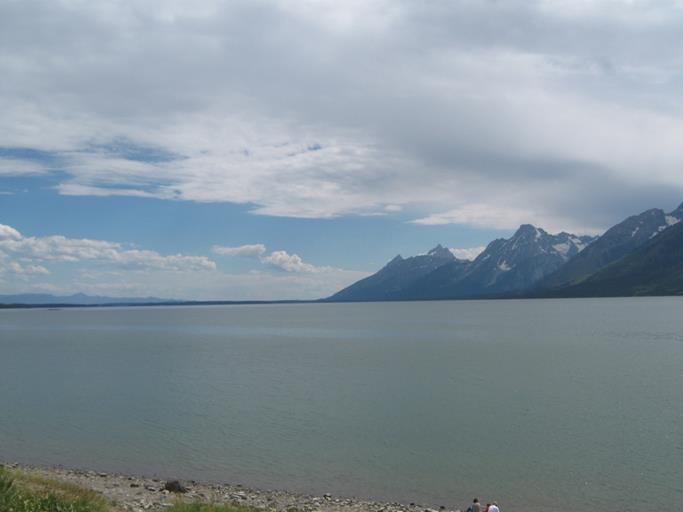 Julie notes “Montana was Magnificent and now Wyoming WOWS us! These peaks just jump up out of the ground, craggy and fantastic.”

We stopped at the visitor centre where we sent yesterday’s blog post on the free wifi. We ordered a couple of pizza’s to go from Doran’s Pizza and had a drink while we waited in the 31C temperatures. Julie notes ” We realized a 100 miles down the road that they made the wrong pizza for me. But it was quite tasty, but no MT Moran like I ordered. Didn’t stop me from cleaning up the last crumb. We heard a sampler of the ‘Hootenany’ that was going on at the nearby Chuckwagon restaurant and bar. We’re guessing a few more beer would make it all that more appealing.” 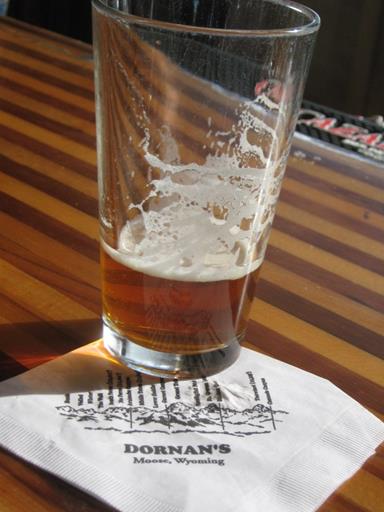 This picture is for Frank and Lola who teased us with beer and wine pictures throughout Europe. The only mistake I made was drinking most of it first before I remembered to take a picture. J Julie notes “Don’t let him fool ya! He was intent on slugging back that beer. I was the one who stopped him in time and snapped this shot.

It was then onward past Jackson, WY to our campsite at Hoback River forestry campsite. Our kind of place. It is quiet and secluded. Our site is right on the Hoback River. We ate our pizza along with a few cold ones and a nice bottle of wine. Life is good! 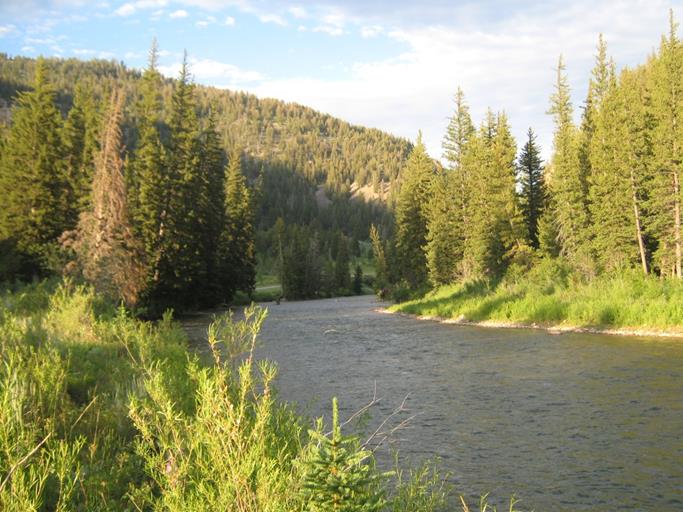 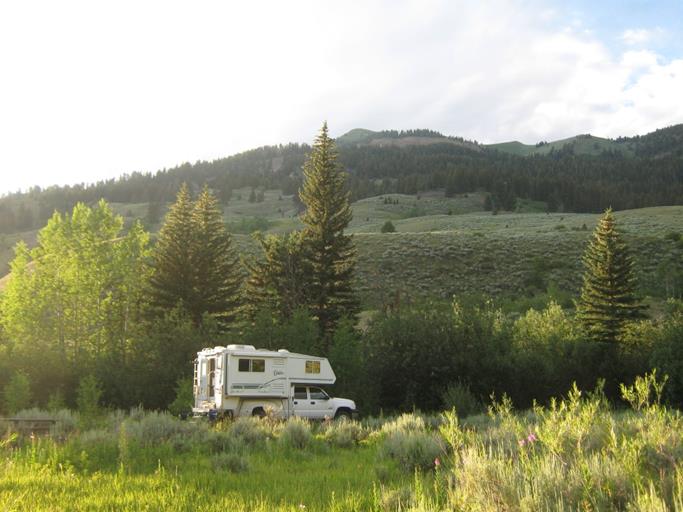 This picture is for my truck and camper lovin’ buddy, Fin. 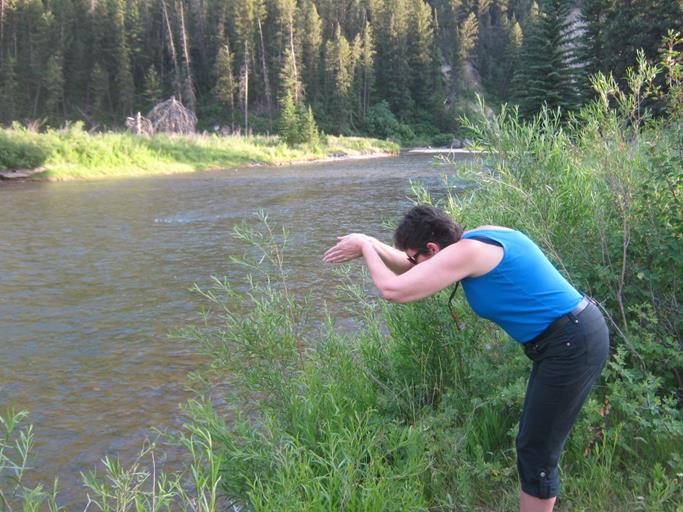 Julie wanted to go skinny dipping in the river but this is all you get to see. Julie notes “You’ll have to imagine the ‘skinny’ part in every sense of the word.”

We were thrilled to see 3 Great Blue Herons roosting along the river…plus we are checking off of our list; Mountain Bluebirds, American Robin, Yellow Happy Go Lucky Warbler, DipsyDoodly Swallows, Trumpeter Swans, Chirpy Little Brown Birds, BusyBody Magpies and assorted other no name but Pleasant Company Sparrows. Now I know it is hard to believe but we are not ornithologists but we HAVE watched the movie “The Big Year” 1.5 times.” 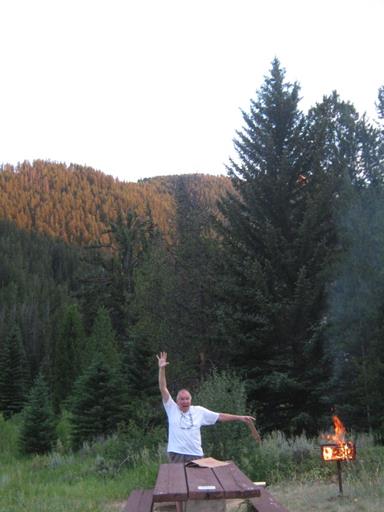 I wanted a fire and I was trying to get someone’s attention. Julie notes “Oh I thought this was how excited Brad got when we spotted the 3 Great Blue Heron’s flying and roosting along the river.”

Julie notes “We had an iPod music day dedicated to our friends yesterday, including a Lola song, a few Linda songs, an array of Leonard Cohen, shouting out to our friend Karl who is such a fan he has vowed to go to Leonard Cohen’s funeral when and if that sad event ever happens.”