Well today was the first day of our 120 day trek with Adventuretours. The first few days are big travel days through the northeastern part of Mexico. We traveled 501 km today. The first part of the day is not very scenic and not the safest area of Mexico but we made it to Aldama, MX. We are now camped in a locked Baptist Church yard with lime trees and a large lawn around us. It is the site of an old Sauza Tequila distillery.

The day started in Mission, TX with a 6:30 AM departure time. We crossed the border without any issues, had our camper briefly inspected at the first check point, and later passed through a military checkpoint. Julie notes “Yes, believe it or not, I was up, washed fed and in the truck before Brad drove off, much to his dismay. I hit play on the iPod and what shuffled out as the very first song on our real first day of this South American tour was ‘Pueblo Joven’ from a selection of South American, Children of the Inca album we have. Now next to the alien thing in Roswell, it is right up there in the WTF? (Way Too Freaky) zone. Also later ‘Don’t Cry for Me Argentina’ and a Chris Isaac song called ‘Waiting for My Lucky Day’ about leaving Texas. (Small letter ‘wtf’s?’)

The sun was rising as we drove into Mexico. Julie notes “This was nice but not as nice as awarding ‘first wrong turn’ and ‘first traffic infraction’ honours to our leader Norm about a mile out as we were leaving our camp. Made for a few early morning chuckles over the radio bands. And Norm may up his caffeine intake tomorrow.” 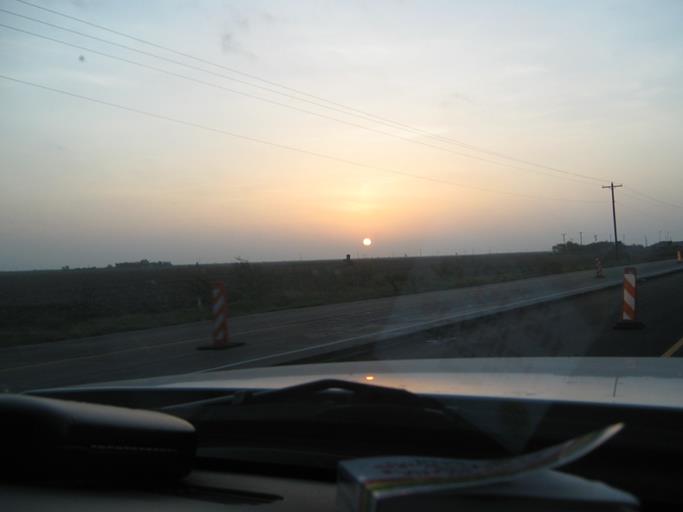 This was in the first major town we passed through; Matamoros, MX. What is it? A martini glass? A large bird bath? Julie notes “Well if it is a salted marguerite glass, I will have to up my aforementioned daily fitness routine quite a bit before I will be able to chug this baby back.” 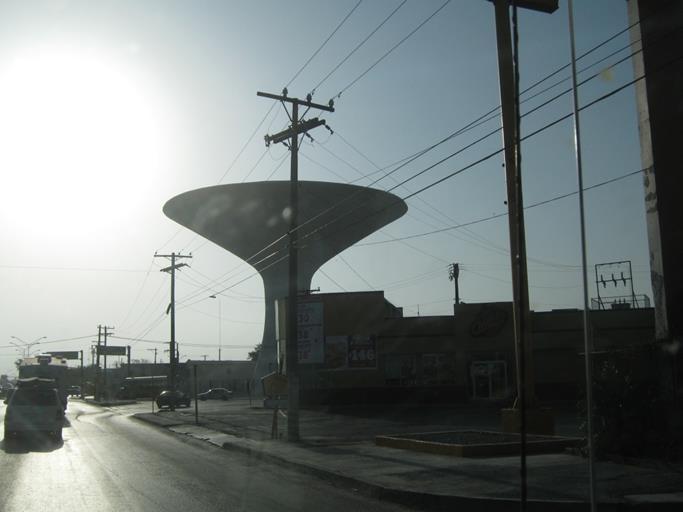 We took a break every two hours. This one at the state run Pemex fuel station. These are the four travellers. 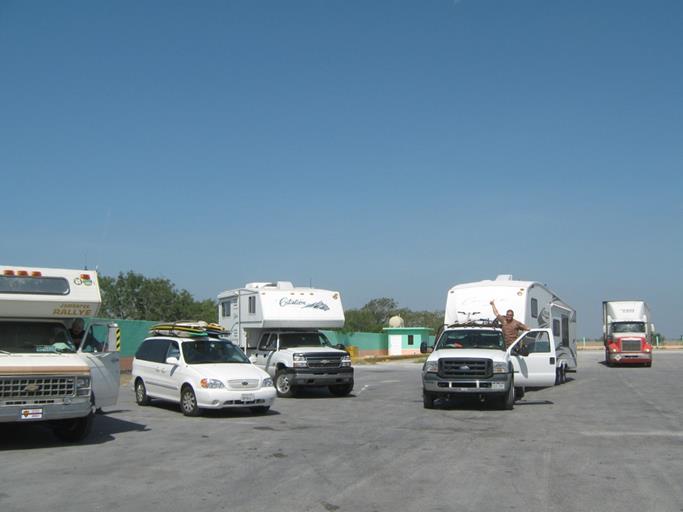 We passed through an area of Joshua trees. The only spot we will see these on the trip. Julie notes “Since we’re talking nature I noticed amongst the birdlife an abundance of terns, hence I believe the origin of the saying ‘one good tern deserves another’. 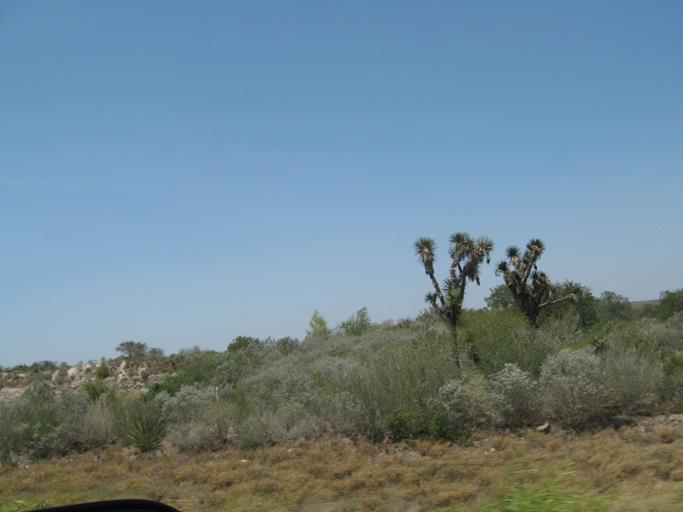 The driving in Mexico takes a bit of getting used to. There are really three lanes. You pull over and let people pass by straddling the line. The oncoming traffic moves to the opposite shoulder. Scary at first, but somehow it works. Julie notes “Dotted lines? Solid lines? Big signs that have the symbol for ‘Do Not Pass’. These mean nothing. Below is a picture of car passing our friend Victor on a solid line, the “Do Not Pass” sign is just out of the shot and there is a semi bearing down at them. I don’t know about them but I had to change my underwear a few times today!!” 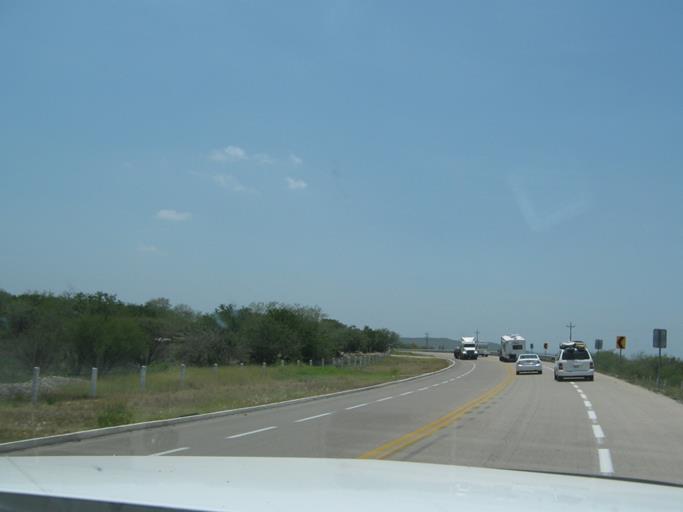 Our little posse from our view as the rear end, tail gunner, clean up crew…. 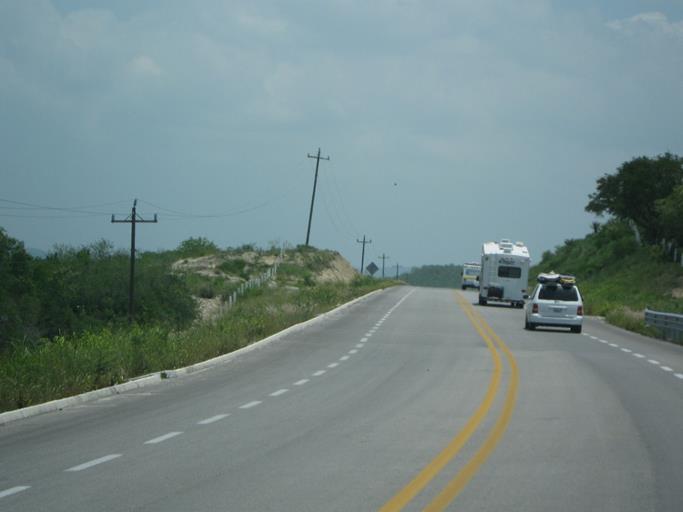 We crossed the tropic of cancer today. (An imaginary line around the globe – We are not IN the tropic of cancer as Julie may want you to believe – see earlier post regarding the Arctic Circle for background information) It is marked only by a yellow ball with no real roadside stop. Julie notes “Hey if anyone knows about the Tropic of Cancer it is me and although we WERE in it for a while, I am hoping we have moved out of it now. P.S. Most people agreed with me in regards to the whole Arctic Circle thing. Just saying.” 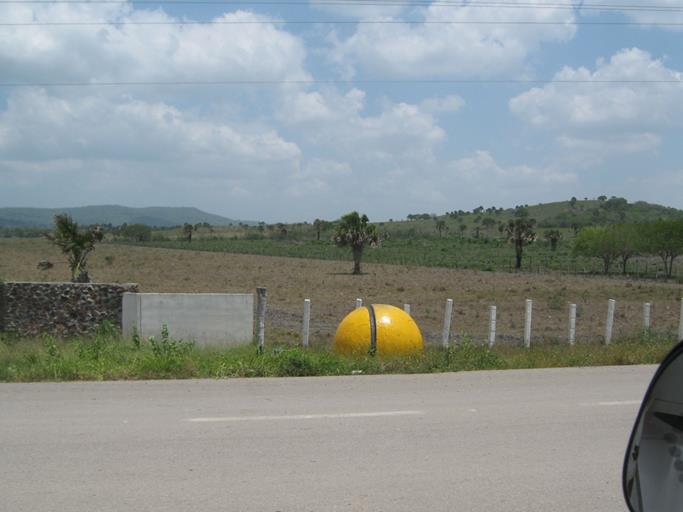 We did not make it to our intended destination today so the leader, Norm, chose a truck parking lot next to a Pemex station as a safe haven for the night. After some disgruntled comments from the group, and further scouting by Norm, we ended up in the much nicer church property. Julie notes 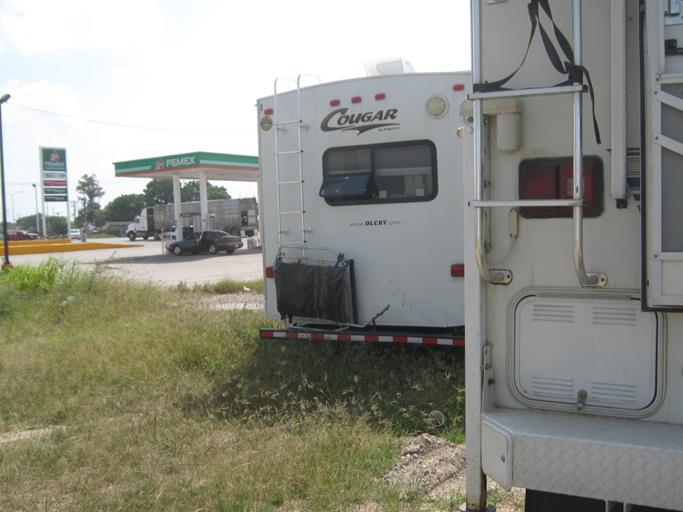 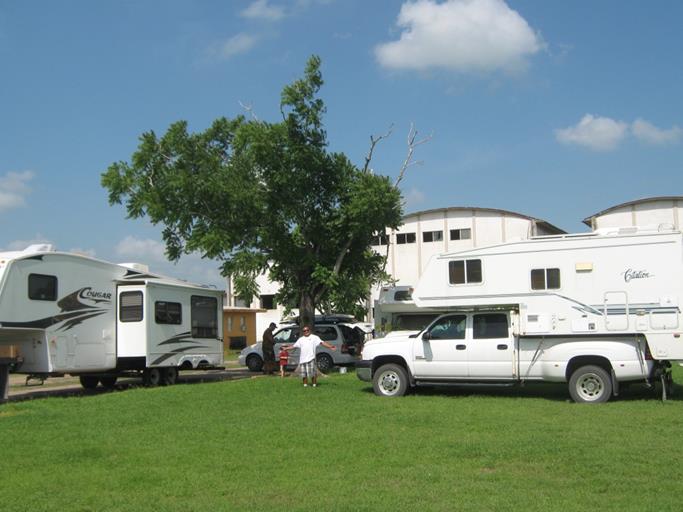 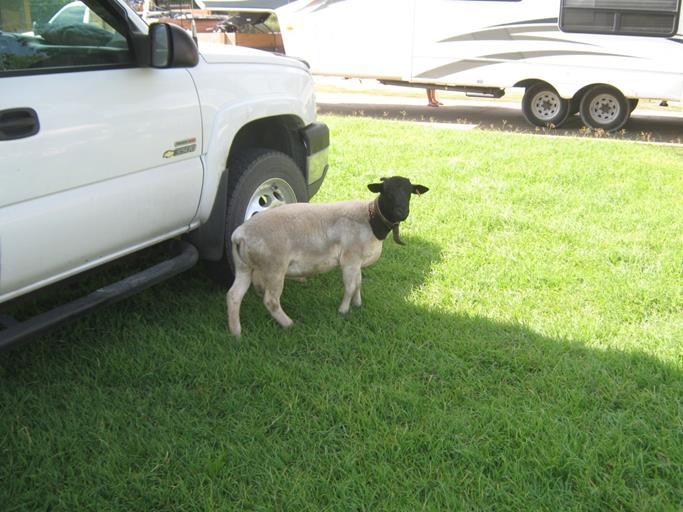 The church and some of the young Sunday evening participants. We doled out some candies and made some instant friends. 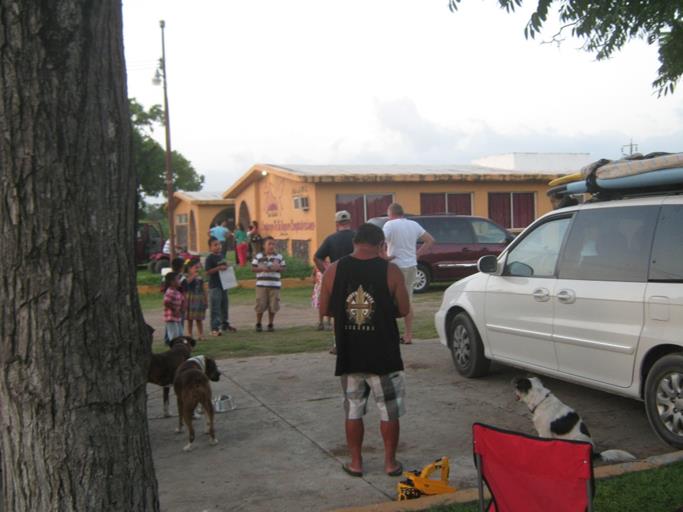 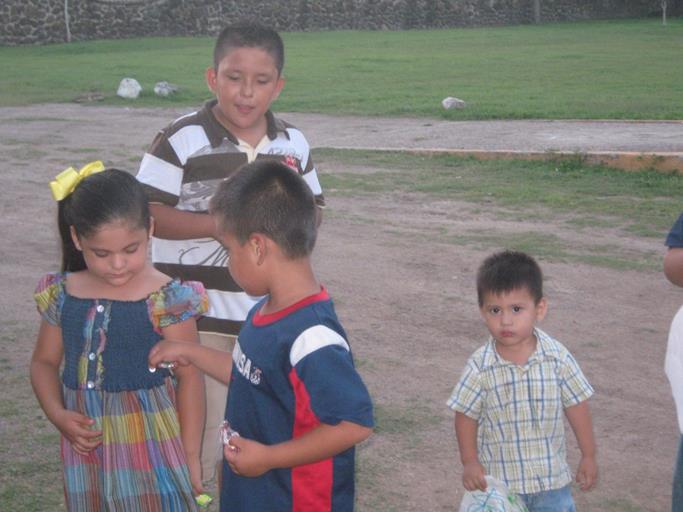 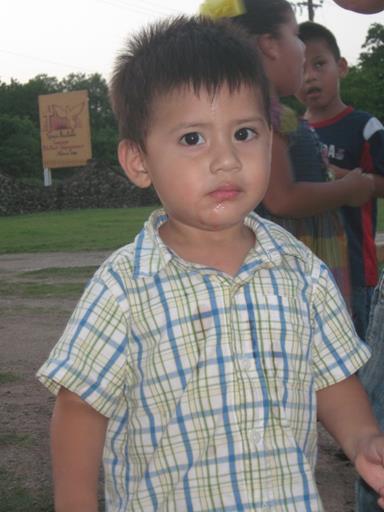 …over and out from Mexico, the muleskinner and his sidekick

Julie notes “It’s 1030 pm, temp 28 C, humidity 83%, no air conditioning and there is some squeally noise outside they are telling us is a cicada but none like any I’ve ever heard. But the muleskinner has been running around, sweating three times the buckets as me, bbqing steak and stuffed portabello mushrooms, driving, setting up things, hauling heavy stuff, and doing his best to keep his sidekick in the camping lifestyle she is accustomed to. So if I wasn’t stuck with sweat to this table and bench and if he wasn’t sawing very large logs in the sauna/bedroom, I’d give him a hug. On second thought maybe I’ll save that for a ‘shower’ day.”