We booked a Panama Canal Transit Tour for today through our guides travel agent contact in Panama. The canal transit tour only runs on Saturdays. A driver picked us up at our “campsite” at 7:30 AM and drove us to the marina. After getting our tickets we boarded a bus for Gamboa. We boarded our tour boat and began the trip back towards the Pacific Ocean and Panama. We arrived back at the marina around 3:00 PM to our awaiting driver and Lincoln. We felt like important people with a car service waiting right at the top of the gang plank for us. J All the other tour members were waiting to board buses or hailing cabs as we got into our air conditioned limo. Julie notes “There was also an impressive entourage of armed policemen on motorcycles, all decked out in black uniforms and mandatory machine guns. We thought they were there to escort us back to our parking lot, but there must’ve been other more important celebrities arriving after us, or our decoys, as they just let us pass on by without even a nod.”

Panama skyline from our bus at the beginning of our trek out to Gamboa. 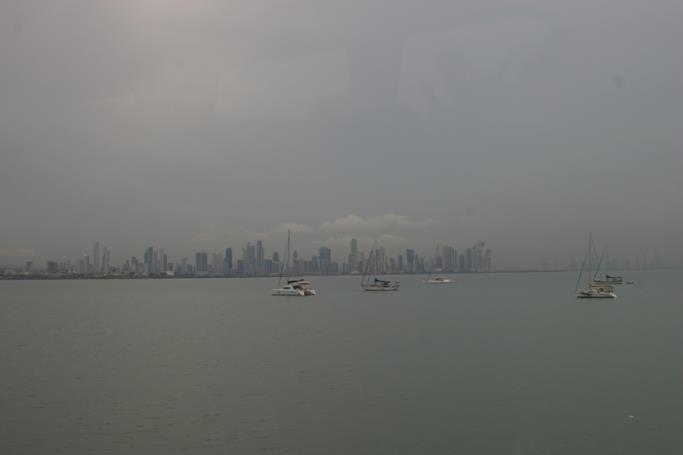 Some of the inner city of Panama. Maybe not so affluent after all. Julie notes “Trust me folks, those blue jeans are never going to dry in this rain forest.” 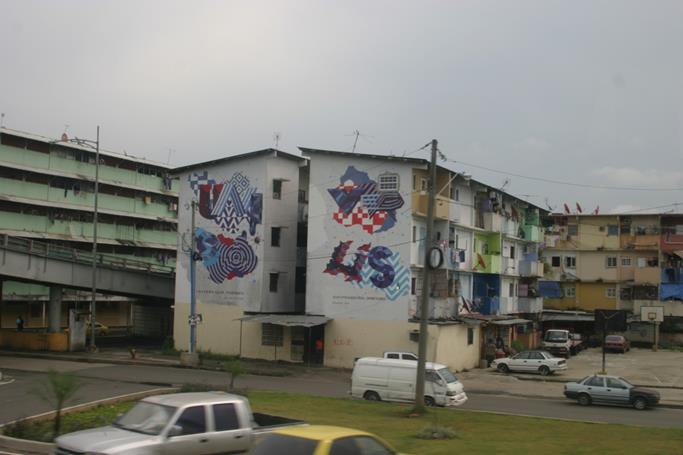 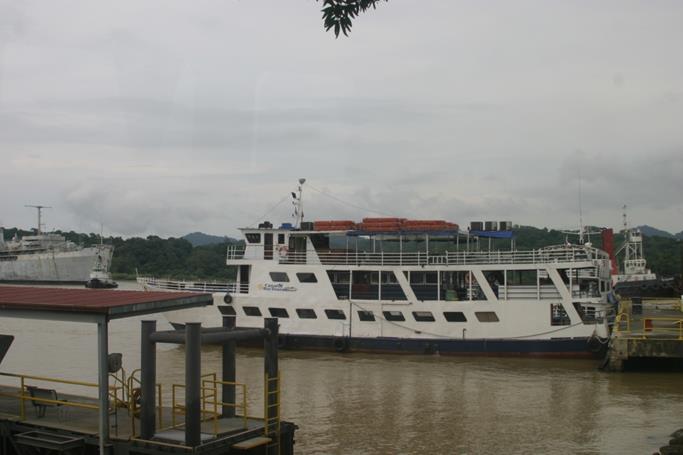 We started off with coffees on the tour. There is no such thing as a grande here. The Panamanians would faint if they ever saw a Tim Horton’s extra-large. Haha. The tour provided us a small snack for breakfast and a nice buffet lunch. Julie notes “Barb if you are reading this, this does NOT count as a ‘nice’ restaurant.” 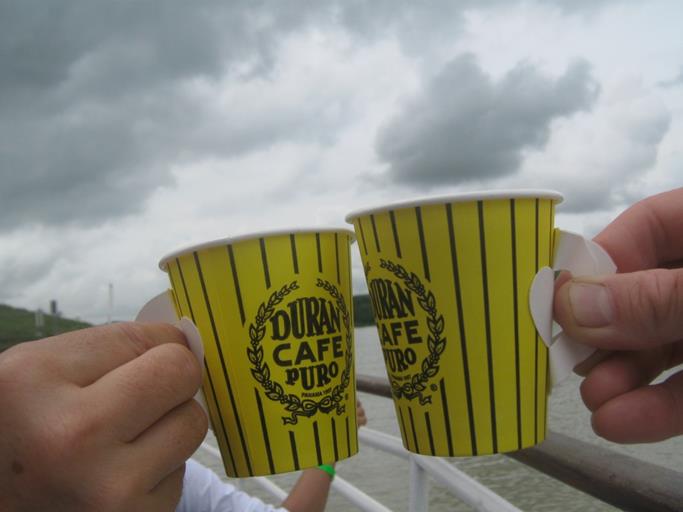 Meeting our first freighter on the canal. 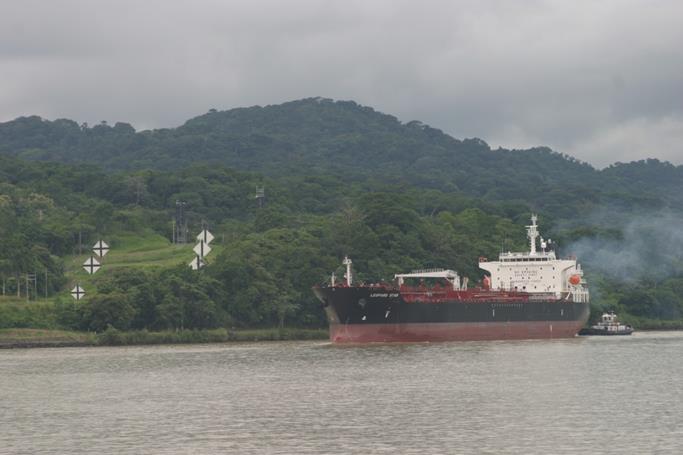 Important tour members with the Centennial Bridge in the background. The bridge opened in 2004 and is the 2nd permanent crossing of the canal. Julie notes “We look happy there. Little did we know that it is tradition to kiss while passing under that upcoming bridge. Ewwww” 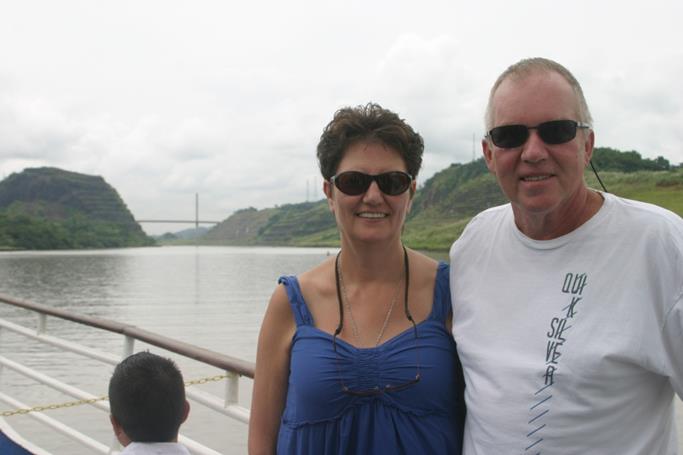 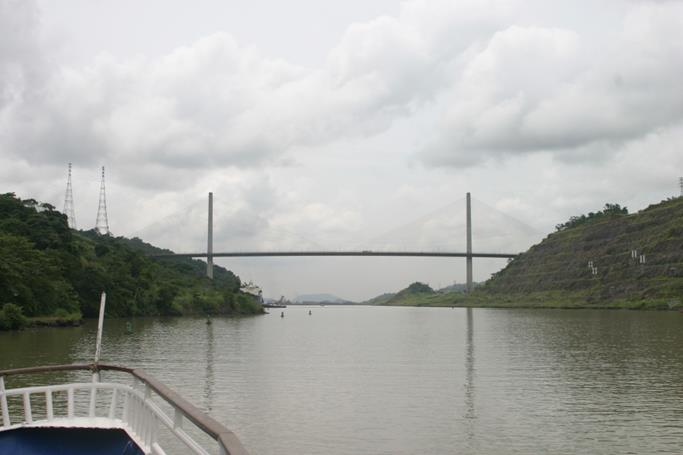 Entering our first lift lock of the trip. One of 3 locks we will go through lowering us 85′ in total from interior Panama Canal freshwater level to sea level. 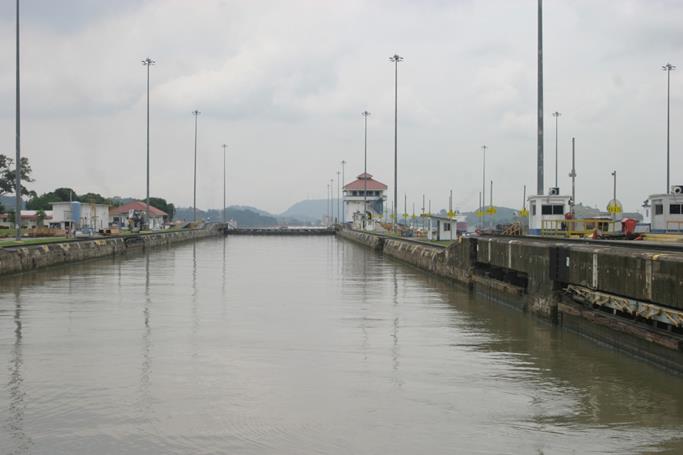 We had to wait in the lock for this freighter to join us. The freighters are guided on both sides by electric trains attached to the ships with winches and cables. Julie notes “Possible historical fact (keep in mind I can never really remember any of this stuff but love hearing and reading about it.) These are called mules, named for the fact that actual mules were used years ago on the Erie Canal. Also, as I understand it, the locks work using magical water powers. Probably some kind of deal was struck with King Neptune. It’s the only plausible explanation.” 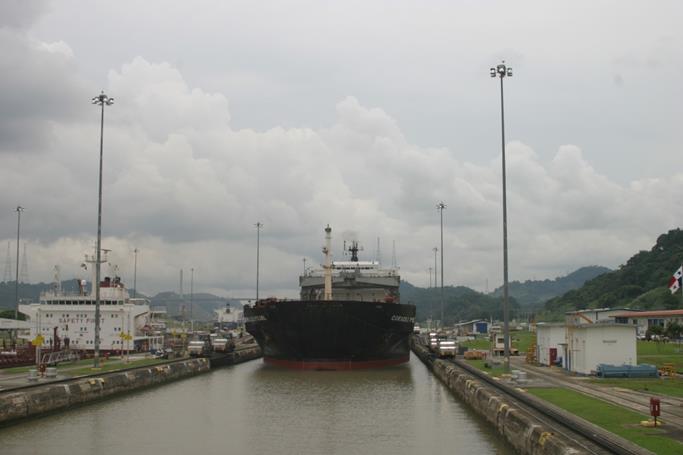 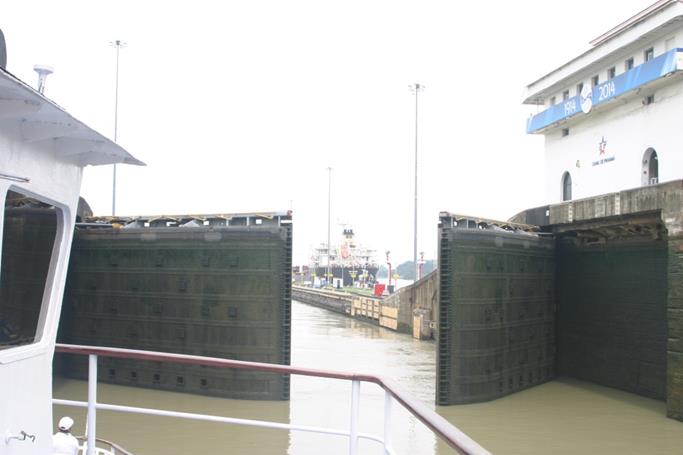 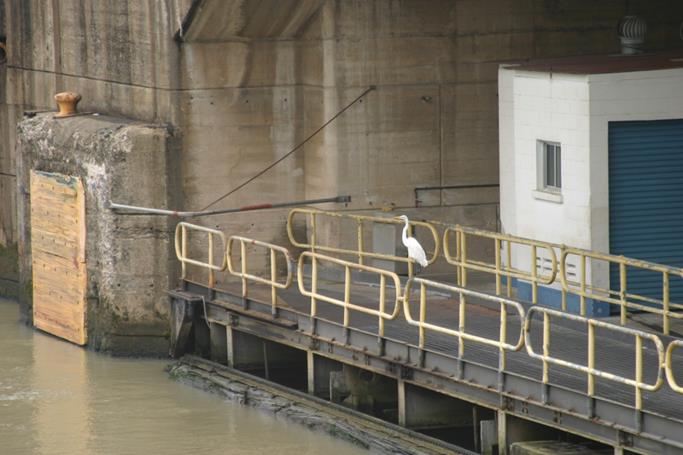 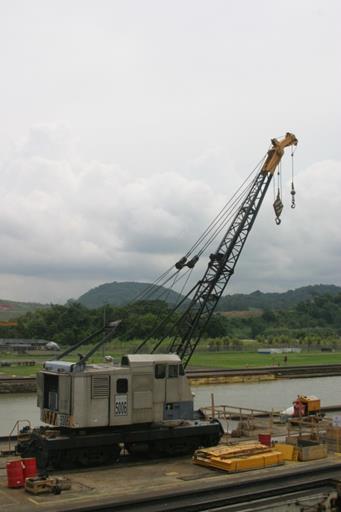 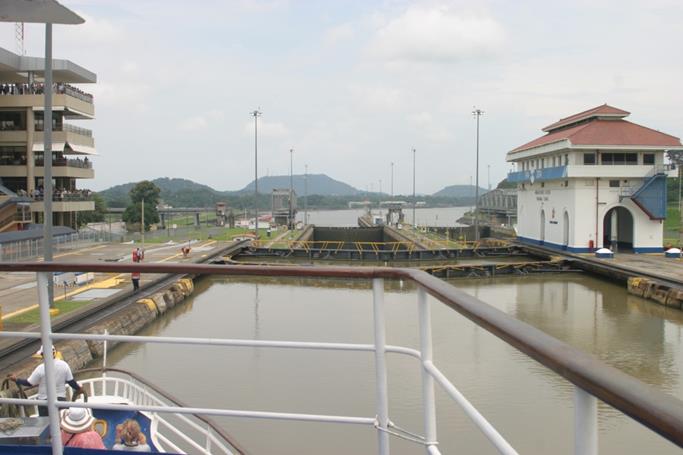 Our freighter friend joined us again in the locks. 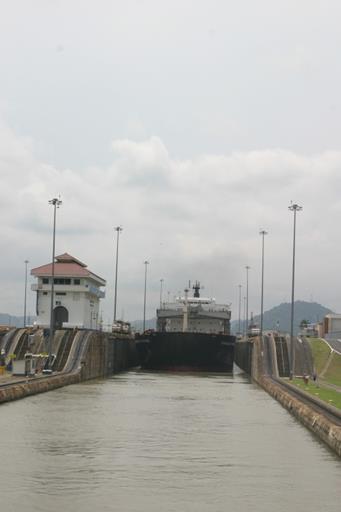 The Bridge of the Americas that we crossed in our RV the previous day. 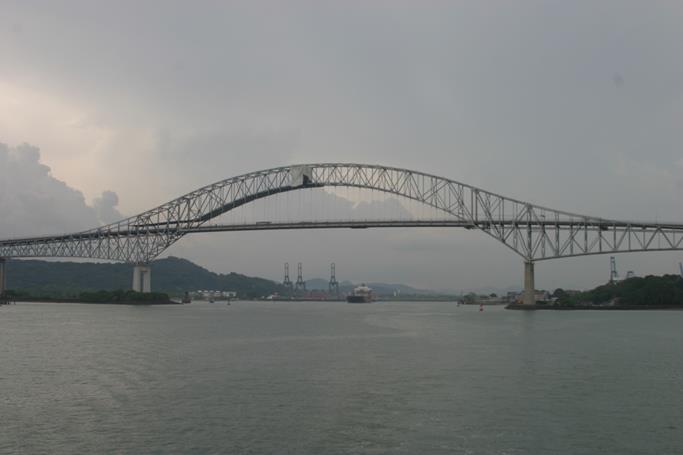 The let us across the bridge! And under it! 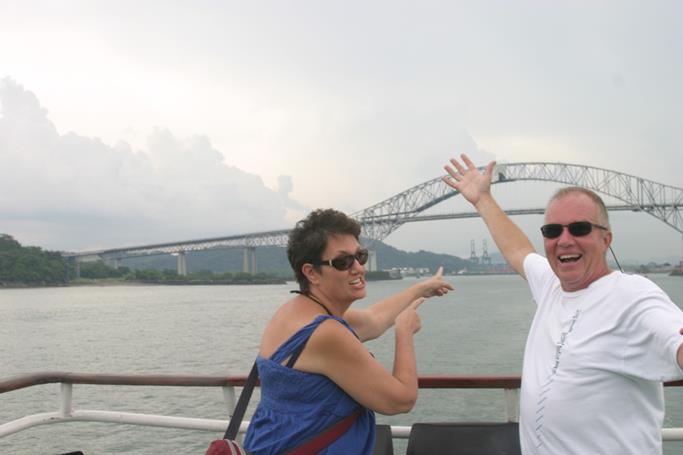 Nearing the end of our tour Julie realized we would be heading back the Estacion de Bomberos’ parking lot in Balboa and was tempted to jump ship. Julie notes “Okay since he brought it up again… Who would’ve thought that in the frame of mind I was in yesterday, being stuck in yet another parking lot, with the aforementioned bonus items, that there would be fireworks happening later on? Oh ya! In the middle of the night, having finally accepted the fact that the humidity was not going to dip below 80% and the fire hall was blocking any breeze we might have had, lying very still so as not to break a sweat, trying to tune out the bomberos’ jocularity as they stepped out to get some air, revelers noisily leaving the community centre right at our back door, hoping they would not back into our rig parked very closely to them and a restless sticky slumber was upon us, all of sudden it happens just like in the movies, Brad and I look at each other and…CRACK, BANG, BOOM, whistlewhistlewhistle,splatterspatter… someone began setting fireworks off right beside us. (The splatter, splatter was stuff from the fireworks hitting our roof.) The only thing missing was the crowd yelling ‘ohhhhh, ahhhhh’. This went on in random spurts (pun intended) for an hour or so. (Yes please feel free to wisecrack about the length of time.) This happens right outside the fire station no less. And someone tied balloons to our bumper Honestly, who could make this stuff up?” 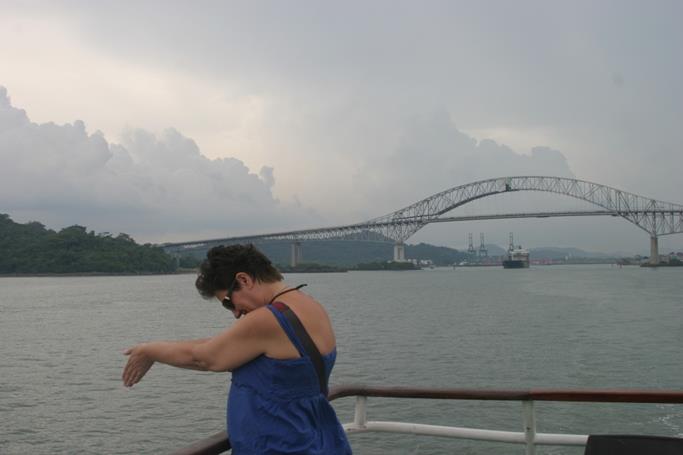 The Biodiversity Museum: Panama Bridge of Life designed by the Canadian born architect, Frank Gehry with the city of Panama skyline in the background. 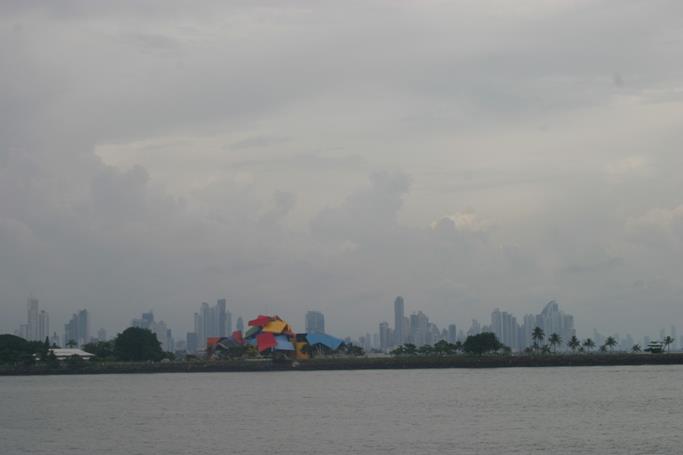 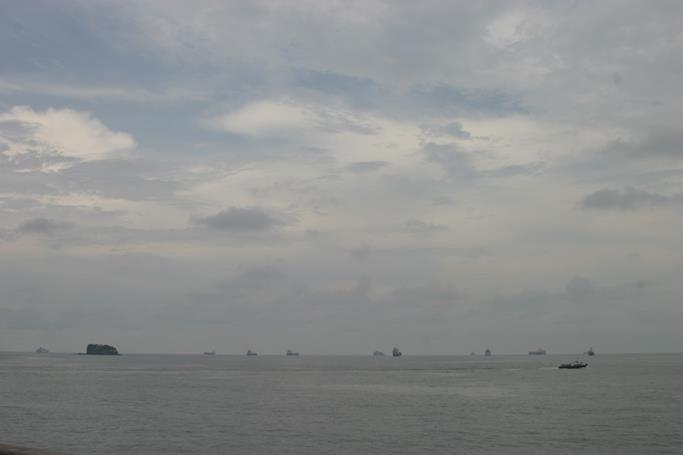 We ended the day back at the RV and each had a much needed shower. Someone had the camera plus the water was cold! Julie notes “He mentions the cold water in case that shower curtain falls down and there is some shrinkage to explain. He doesn’t want another George Costanza incident. And yes I showered in the estacion de bombaros’ parking lot in the middle of the afternoon and yes it felt amazing!” 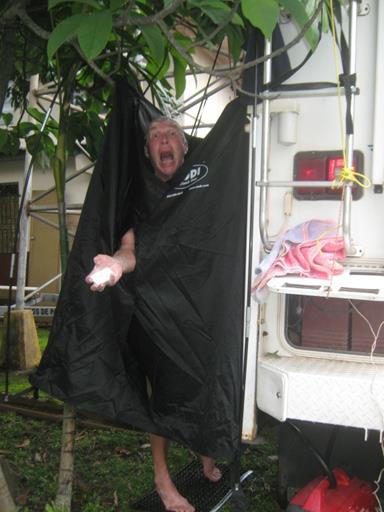