We were very sad today to have to leave the luxury of the Trump Hotel in Panama and head back to our camper. We had another great breakfast in the hotel this morning and then relaxed until our noon checkout. We took it easy all afternoon once back at the camper so not much to report today. We are getting anxious to get on the road again but have hit some snags in our travel plans that we are trying to resolve. Julie notes “We did walk to a different restaurant for supper, The Grand Canal Café. The food was great. The servers all wore Panama hats. We were a little worried as we were the only customers at first. But being the trendsetters that we are, people followed suit and the place started filling up.

This is our sadness showing leaving the Trump. Julie notes “Good bye bathtub! Remember to Facebook me.” 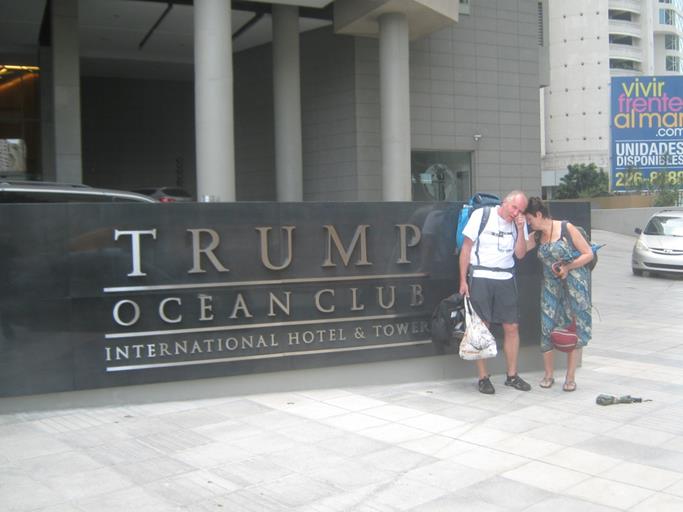 That’s all for today folks, carry on, the muleskinner and his sidekick

Julie notes “We were greeted back at the Estacion de Bomberos with a chorus of car alarms as there were several cars parked close to the ship yard transport route that were particularly sensitive to the transport air brakes. Music to our ears. And while Brad was off getting more gas for the generator I was interrupted during my siesta by a loud crash on our roof. Being in a military zone my first assumption was we were under attack or the bomberos were subtly hinting we should move on. After a quick outside inspection I realized we were under a mango tree. So now we have some fruit stored roof top for later. Bonus!”