Today is the last day of August. It’s hard to believe we left Grande Prairie eight and a half weeks ago.

We were up early, made fresh coffee, and took our lawn chairs over to the banks of the canal. We spent a few hours just enjoying the morning and our coffee. Julie notes “With no jets or air brakes to try to ignore we were roused fairly early by the beginnings of the work day for nearby construction workers. People came in bits and spurts all morning and we gave up trying to figure out what their scheduled start time might have been. A boisterous and jovial crew they were though considering it was already almost 30 C on an early Saturday morning.”

We took a long walk along the causeway to the end where most of the developments and restaurants are located. It is an active area, especially on a Saturday, with bikers, joggers, families, and fisherman. We ended up having some drinks and food at one of the outdoor restaurants. We then made the 3 km walk back in the heat of the day. Julie notes “Okay so I thought my flip flop between the toe callus had been sufficiently built up over these past many weeks. You know the one I mean. This 6 kms today proved that I was sorely mistaken. Sorely being the operative word. Sorry about that tootsies.”

An empty ship exiting the canal. 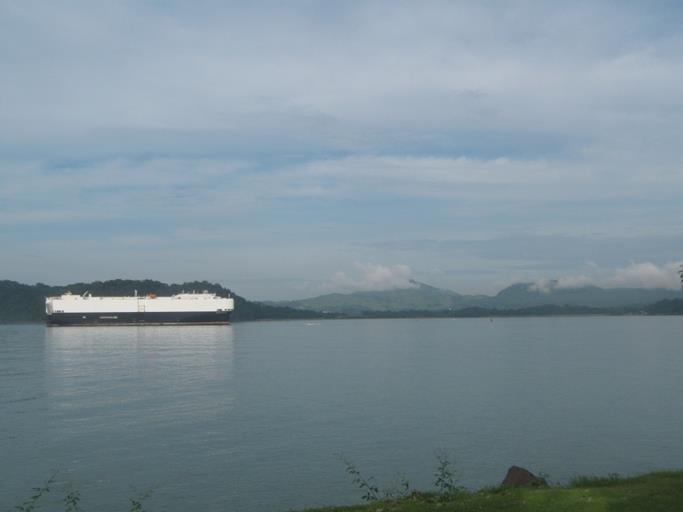 Canal, coffee, and contemplation. Julie notes “I bet he is thinking ‘How did I manage to land such a wonderful wife? It makes me smile just thinking of her. I am the luckiest guy to be stuck in Panama with her!’ He does go on and on like that sometimes but it’s hard to argue the truth eh?” 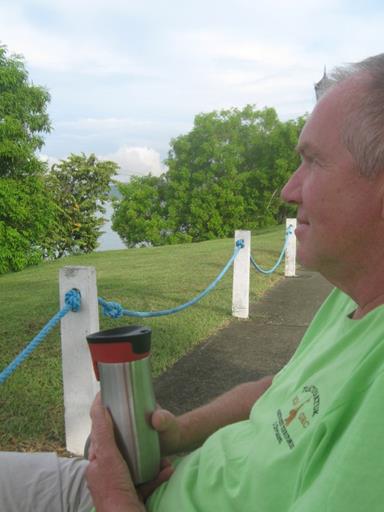 Another iguana came by to visit. 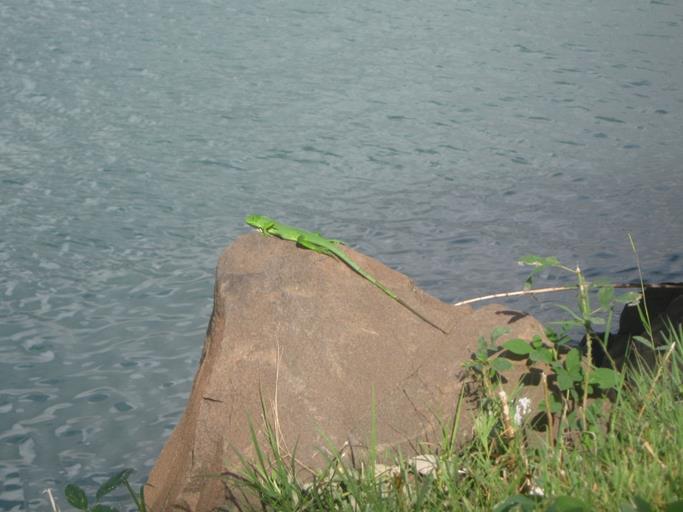 My iguana impression even includes the correct colour. 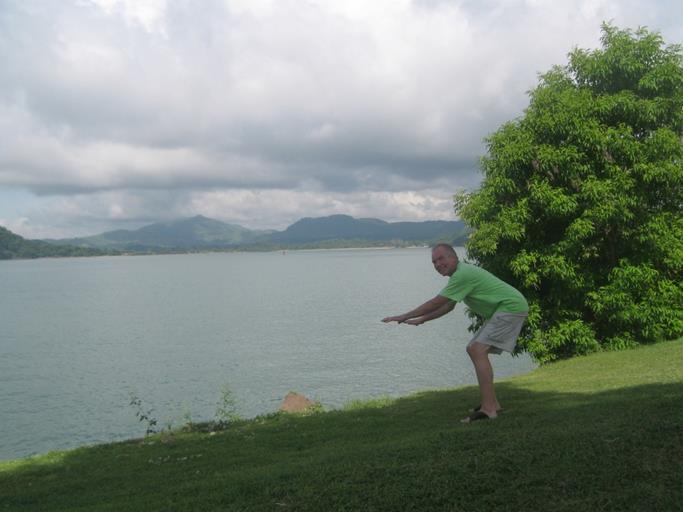 The pedestrian walkway past the new museum following the banks of the causeway. 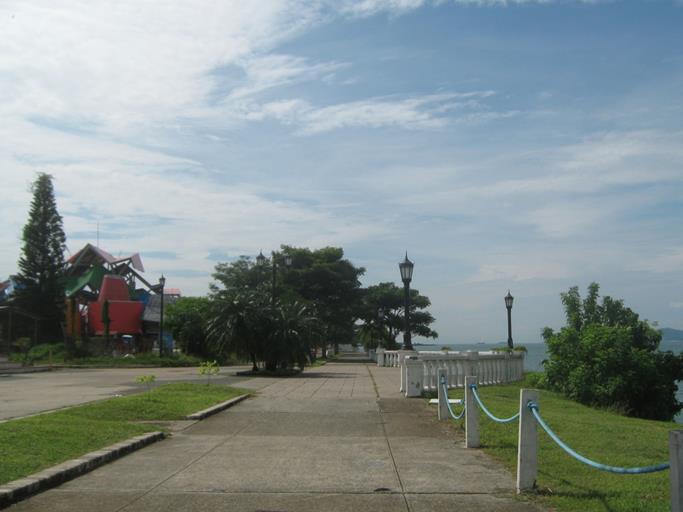 A loaded freighter exiting the canal. 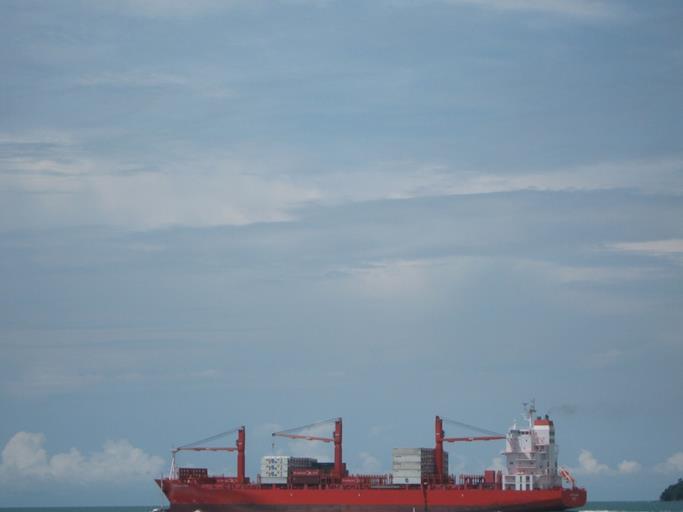 Julie’s refreshing sangria after a long walk with our ever present English/Spanish dictionary. Julie notes “Tools of the trade. And the more sangria I drink the better (I think) my Spanish gets. I should maybe just carry around a drink in my purse instead of the dictionary.” 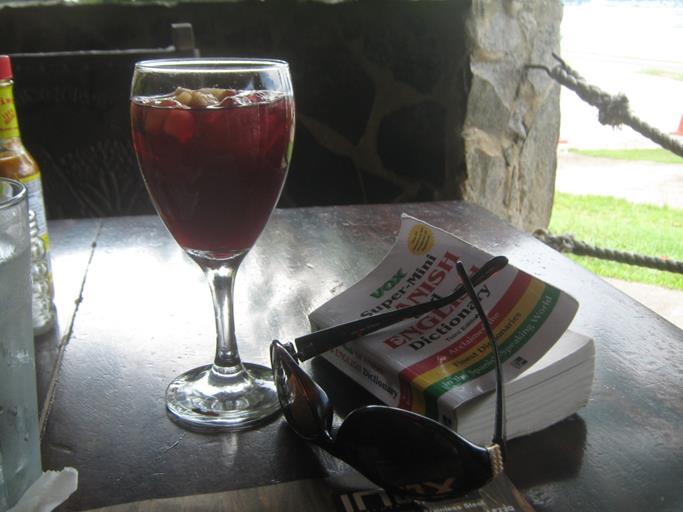 And finally, a shot of our new side street campsite. Julie notes “There is that iguana impersonator again!” 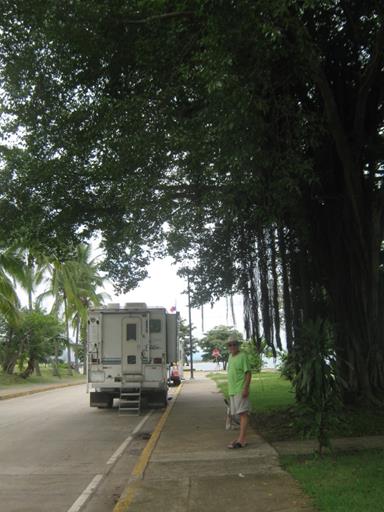