We started the day in David, Panama. We had some errands to do before our long trip homeward. We topped off our tanks with propane. Refilling stations are much harder to find in Central America. Most of their propane appears to be delivered by truck from central depots and not available at gas stations. Julie notes “Apparently Brad’s off gasses do not keep the fridge running so I am glad the tanks are full and a big thank you to Brad and his propane station friend for making that happen. I know some sweat and gas was involved.”

We also replaced our two RV house batteries at Casa de Batterias. I was able to find heavy duty Trojan 6V batteries similar to what we had, actually better than what we had. We were then on the road to Costa Rica and another border crossing. This border crossing was much smoother and quicker than what we experienced going the other way. That was a nice surprise. Julie notes “If you want to see Brad excited just bring out your forno oven or your mega deep cycle batteries. He literally gets the giggles. Merry Christmas honey!”

We suggested to our guide that we find a spot along the beautiful Pacific coast we were following instead of a parking lot. After a few miles we found a beautiful beach where we could camp. Ahhh, it is a wonderful spot. I had a swim in the warm ocean. As we picked up shells and rocks along the beach, we were both reminded of Julie’s mom, Vera. She was a rock and shell collector extraordinaire. It is hard to believe it has been a month to the day since Vera’s death. Julie notes “I bent over to pick up my first interesting rock and went into a sentimental crying spell. Took a little time out in the camper and then went and enjoyed the beauty of the place as mom and dad would have (if it was in Canada.) Miss you!”

We had some delicious leftover paella, roast chicken, and a tomato and cheese salad. We both feel great finding this spot and just being able to relax on the beach. We opened a bottle of wine and had our supper inside listening to the evening rain. Nice, Nice, Nice! Julie notes “You’re probably thinking the same as me…’Didn’t Brad take Julie on another holiday where it rained every day?’ The answer is ‘Yes.” But who is really keeping track of these things, right?”

Even if the homes may not be to our North American standards, the plants in the tropics are amazing. 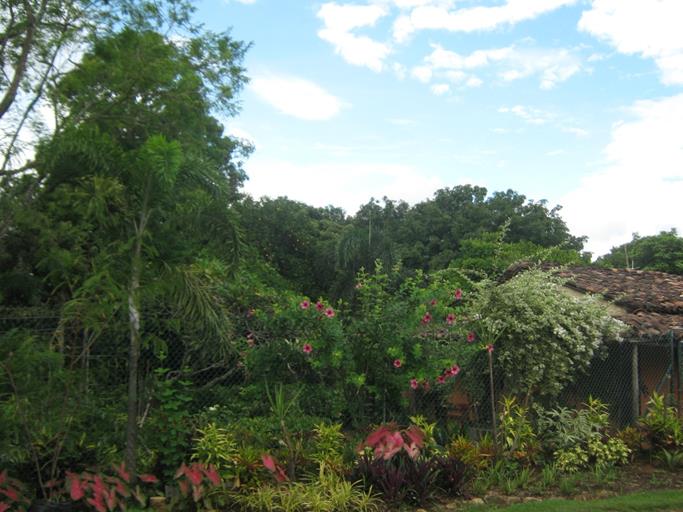 We just missed a picture of this guy holding onto the back of the truck going up a hill. If he was in a race he may be disqualified for that manoeuvre. 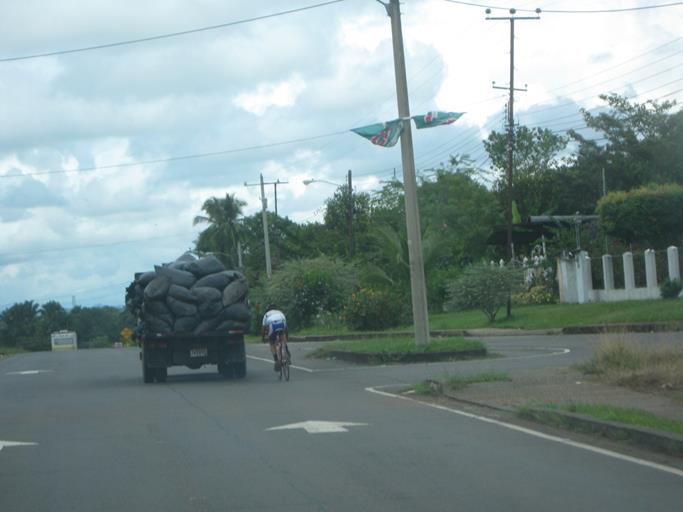 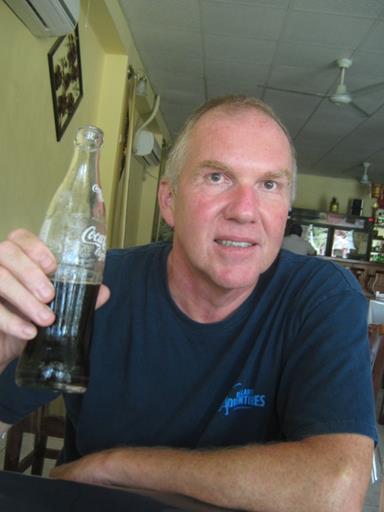 Palm trees on a plantation. The palm oil is harvested mainly for various cosmetic products. Julie notes “Rumour, or maybe even fact, has it that the oils are carcinogenic and only sold now to countries outside the North Americas and Europe. Someone should tell the other places that this stuff is not good for them. But the trees are pleasant looking and supposedly there are monkeys in those hills.” 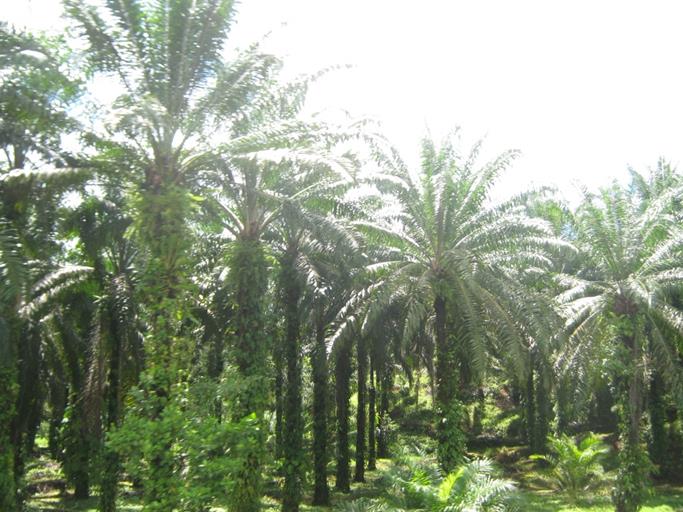 Our beachside campground. This is what I think of when we talk about Costa Rica! Julie notes “I should’ve taken video of Brad trying to manoeuver around the rocks and the waves to finally submerge, but the camera was on the last ounce of battery power. You will have to just imagine it and also imagine the realization after he makes it back out that and there is a nice smooth beach just a few yards down the shoreline. Oh well. It was good amusement for me and that is what really matters right?” 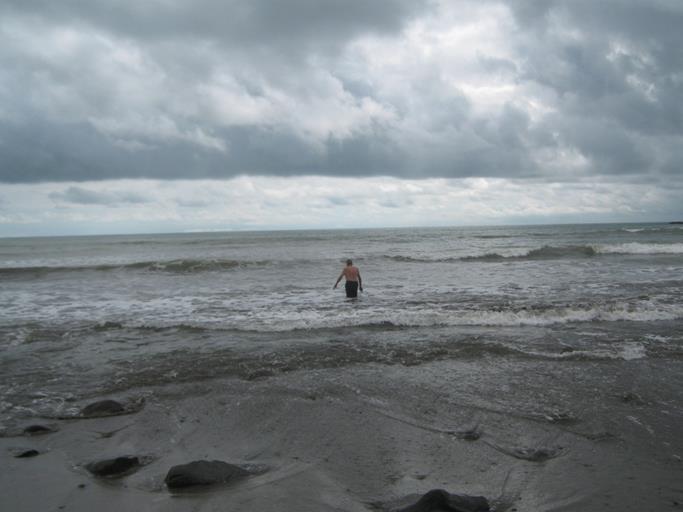 Julie notes “Those clouds you see held off long enough for us to have some lovely beach time and then became another amazing rainforest meets ocean thunder storm. We ask ourselves again ‘How can the thunder and lightning always be directly over us? There may be some bible scholars out there who have the answer to that.” 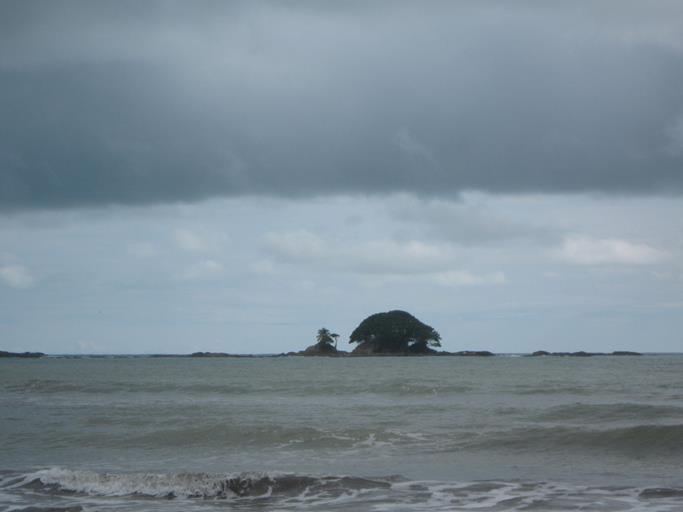 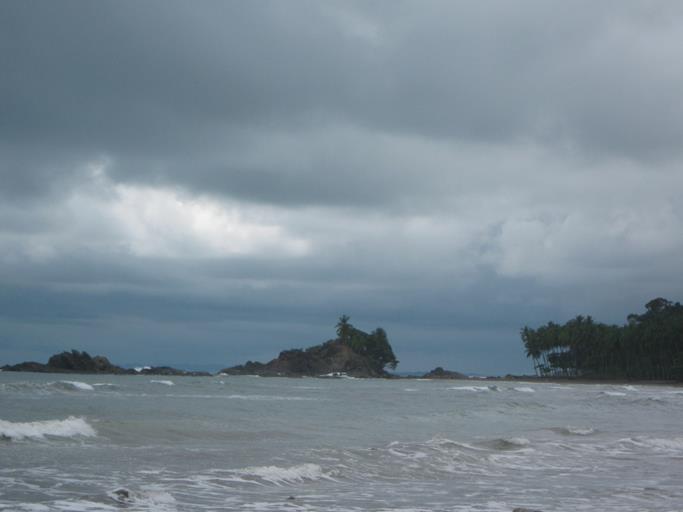 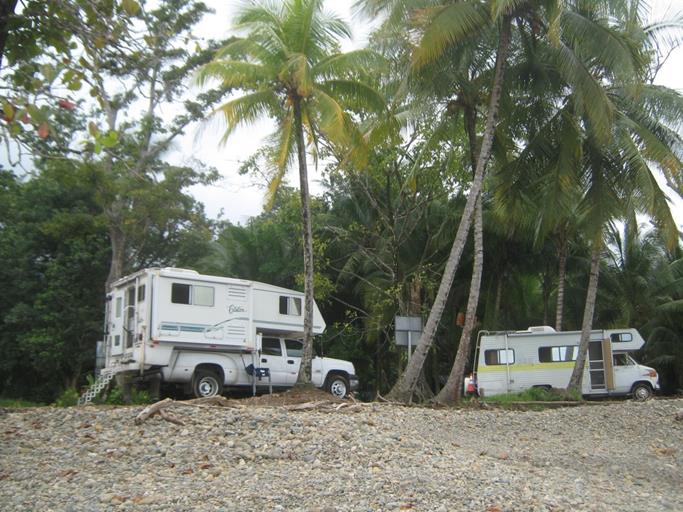 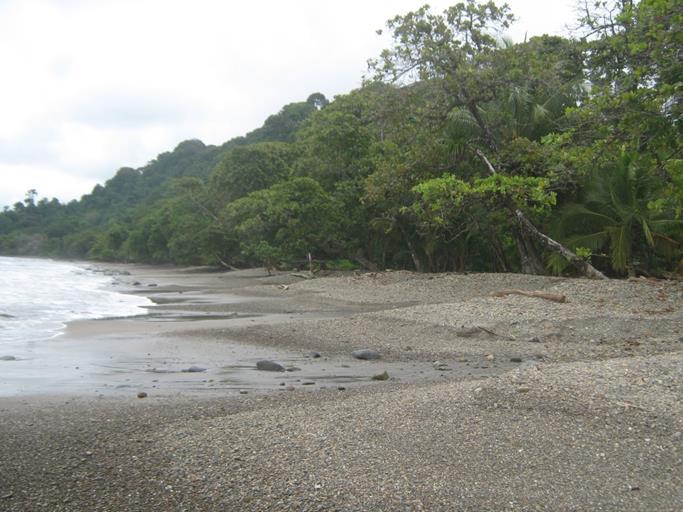 Julie notes “Itunes and I got along very well today. My favourites, out of many a propos selections it chose to play today, were songs from one of my first cassettes way back in the day, An Evening with John Denver. I just recently purchased the album from Itunes for Mom’s funeral as she was a big John Denver fan as well. Now we won’t go into the details of how MY cassette fell into the hands of my sister, Krista. I am not one to hold grudges, for long anyway. It was probably pay back for Brad stealing her jeans. More family dirty laundry we don’t need to air here. But anyway, back to the songs…I opened the door of the already running truck this morning just as John was singing ‘Welcome to my morning’ and it did feel like an old friend welcoming me as I had listened to that cassette (before it was ‘borrowed’ right Krista?) innumerable times. Then this afternoon as we continued our backwards trek John’s ‘Sweet Surrender’ talked a lot about being on the highway, ‘Not knowing where we’re going, not knowing where we’ve been’. Which is kind of how we feel and he made it seem like a good thing. So thanks John wherever you are. I hope you are sitting around a campfire with my Mom and Dad serenading them with their favourites.”