We left the tourist park around 7:00 AM this morning and headed for the Copan Ruins. We arrived here around 1:00 PM. We had a quick lunch in the cafeteria, hired an English speaking tour guide, Juan Carlos, and headed into the ruins, the underground areas, and finally the museum. They kicked us out of the museum at the 4:30 PM closing time. I was pretty much done but Julie was still busy reading every placard at each display. A typical museum process for us. Julie notes “Yes since he took me to a museum on our honeymoon we have known this may eventually be the straw that breaks this marriage’s back. At least I get my money’s worth and at least give the impression I am retaining some info so that I can then turn it into misinformation when I relay it to the next person. But I’m not the only one misinformed. Turns out the archeologists who reconstructed the famous Mayan hieroglyphic staircase here a few years back put it back in the wrong order. I guess there was no Mayan spell check back then. There is a Japanese team working on fixing the translation using computers. Now can you imagine the ‘lost in translation’ through many languages back to English?” Brad notes “Our Copan guide also informed us about life in Honduras. He told us that Honduras had beat Mexico 2-1 in the football game the other night, which was celebration we had heard, and would go on to play Panama. All the people of Honduras come together for football, kind of like hockey in Canada. Left wing and right wing politics are forgotten and the people are happy with the big win. The government, knowing the people were all happy, quickly raised taxes the next day. Things are the same wherever you go, I guess!”

We just about beat the afternoon rain but got drenched on our long walk back from the ruins to the museum. Oh well, it is a warm rain and I think it was time for Julie to have another shower anyways. Julie notes “Turns out maybe it wasn’t the barnyard we were getting a whiff of at the last campsite.”

Another good day. We made forward (er, maybe backwards?) progress towards our destination and took in an amazing site.

A scene along the highway travelling towards Copan. 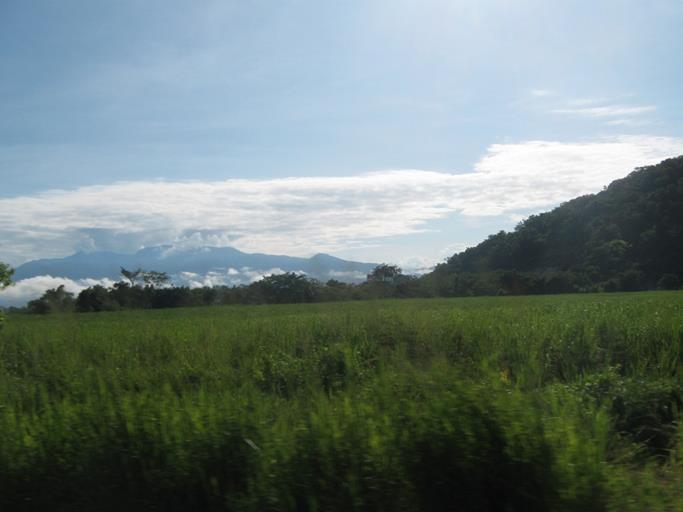 This cute little old lady walked by us at one of our break stops with the yellow towel on her head and proceeded to sit down in front of this gas station store and watch life go by while doing some visiting. 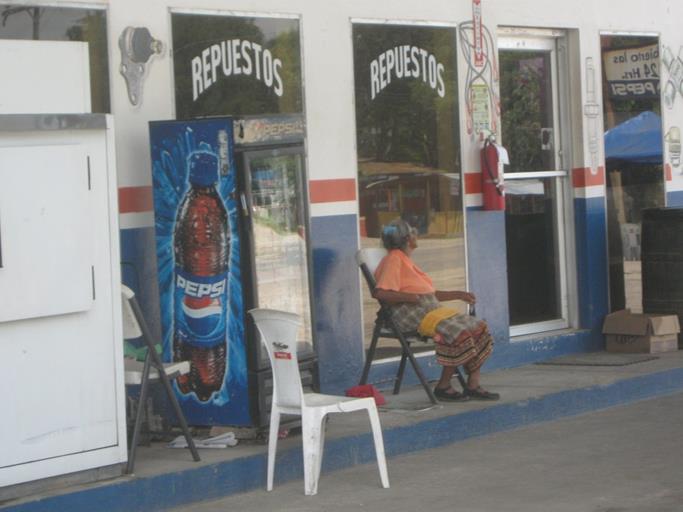 Some shots from the Copan Ruins in Honduras. Julie notes “This is a grave marker. Which made it easier for the grave robbers unfortunately.” 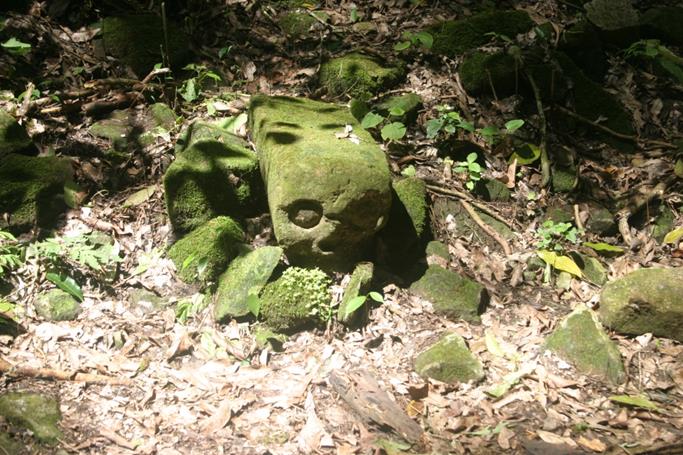 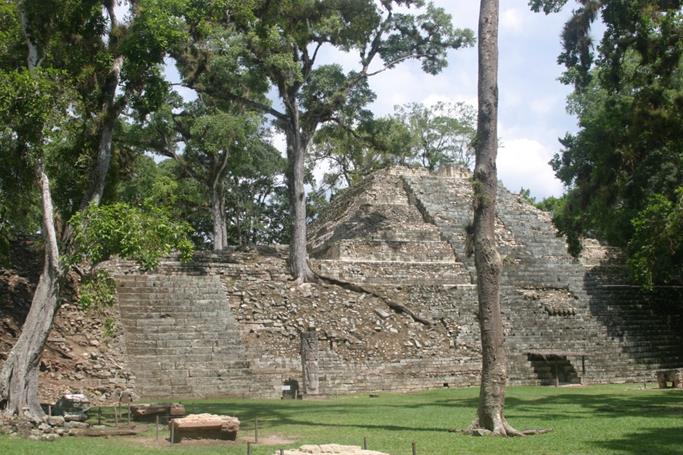 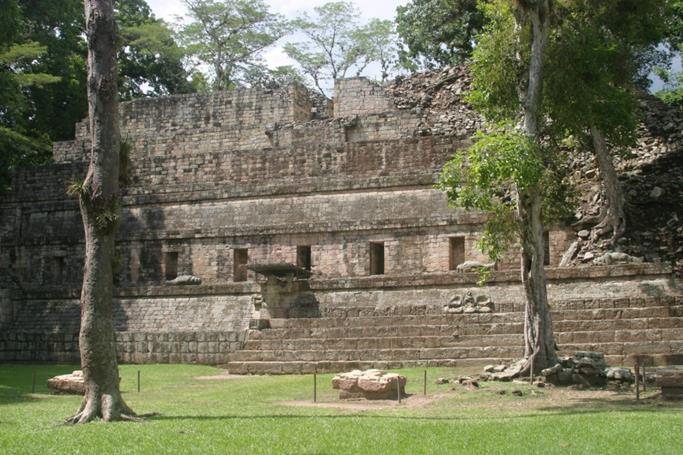 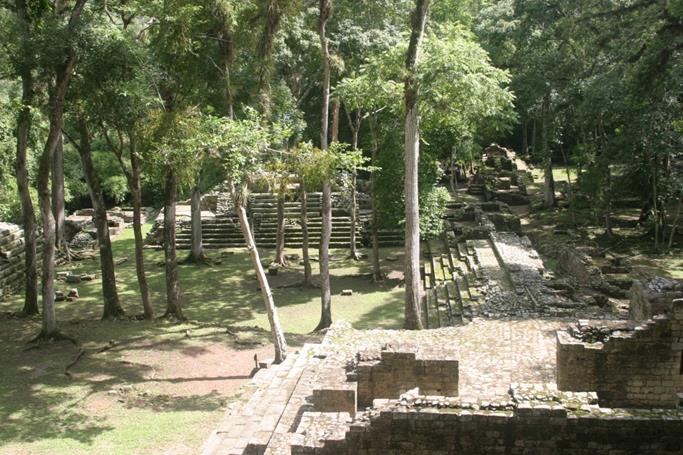 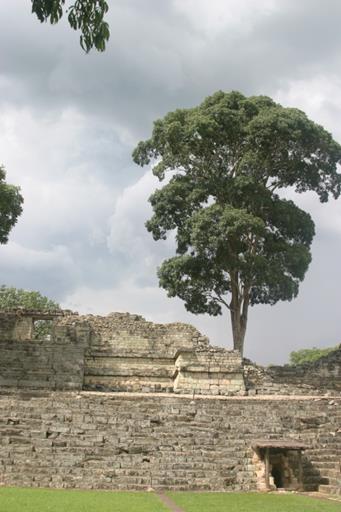 Julie notes “You can’t see him but ‘Chuck-chuck’ (my Canuck-chuck spelling), the rain god was building behind us and loudly announcing his approach. Maybe not a good time to be holding my metal drink container up in the air, but Brad is taller than me and has that metal plate in his head.” 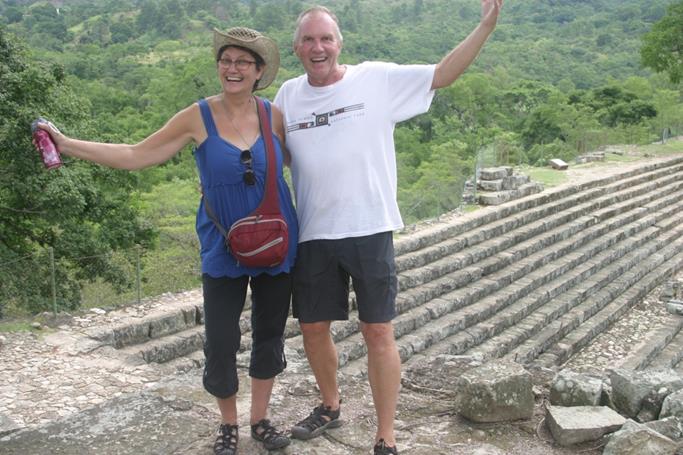 Macaws that are raised and released in the Copan Ruins site. Julie notes “The macaw was held in great esteem by the Mayans. They were linked to the sun god and there were many carvings and plaster statues of them throughout the ruins. They also have big beaks just like the elite royalty. From birth the wealthy elite used methods to flatten foreheads, protrude noses, cross eyes and fill their teeth with jade. If it weren’t for the jade teeth I almost had them convinced that I was reincarnated Mayan royalty or goddess. I would go by my old Kayaking Goddess title or perhaps Princess Canuck-chuck.” 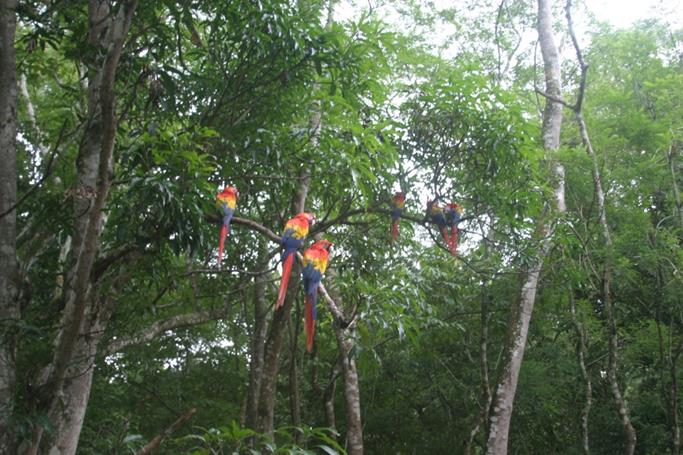 This little girl, Carlita, posed for a picture. She is one of the children of the owners at our campsite across the road from the ruins. Julie notes “Her brother Brian came to the camper to practice his excellent English that he was learning in grade three. And also agreed to take a little bit of candy off of our hands.” 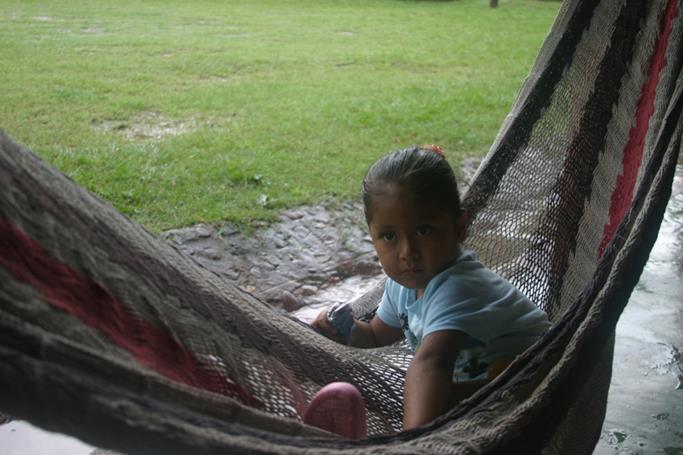 Julie notes “Bob Dylan is singing ‘it’s not dark yet but it’s getting there’ so that means bedtime no matter what the clock says in whatever time zone we may be in. The humidity is high as it drizzles off and on but the temp is a pleasant 28 C. Nice sleeping weather.”