Today I had to finalize our travel plans including flights, guides, hotels, and car services. Guatemala apparently needs a signature on file for credit card transactions. This meant finding a telefax machine. You would think that should be an easy task wouldn’t you? We also had to send some email and make some phone calls and I felt that I had already overextended the graciousness of our RV Park staff. The RV Park wifi hasn’t been available for a few days. We headed in to the Amatitlan mall complex to conduct this business. The first stop was breakfast at the fast food chain, Pollo Campera, because they offer free wifi. Their wifi was also unavailable but it was fun watching Julie ask for a table for two for breakfast in Spanish. The hostess actually laughed out loud, I think, and called for an English speaking helper. J Julie notes “‘Desayuno por dos.’ Sounded perfect in my head. But perhaps comes out as some kind of joke when mangled with a Canuck accent. It sure made her giggle. Then the English speaking waitress kept saying ‘Oh, you speak Espanol!’ in an encouraging way when we threw around the few words that come automatically now. People are eager to help but we’ve forgotten by the time they’ve finished talking.”

We then tried to get a SIM card for our unlocked phone. The first vendor did not have the mini-SIM card we needed and pointed us to a different service provider who could help us. Off we went to find out that they would not open for 10 more minutes. (Julie notes “I was too slow getting the camera but in your mind’s eye imagine Brad, 6’1″, windmilling with the gun toting 5’0″ security guard asking about the opening time. Priceless.”) Remember, we are in bed early and up early and we get places before they open. That seems to be the local rhythm of life here. Merriam was very helpful and had cell phone and Internet access set up for us in no time. Phewf. Now we could email and phone various parties we needed to contact. We were getting closer to finalizing our plans but I still had to print a form, fill it out, and fax it to the tour operator. There was no office/Internet kiosk in the mall we were told. I went into one of the electronics stores and asked if they could help me print and fax a form. The manager agreed to print the form for me but they did not have a fax machine. One step down, one to go. After completing the form, I tried asking a few non-English speaking staff in various stores for assistance to Telefax a document for me. I was not successful until I met Caroline in ACE Hardware. Caroline could not fax it for me but agreed to scan it electronically for me so I could email it. Caroline is the Numero Uno ACE Hardware employee and I told her manager exactly that! Finally, we could complete our bookings. Another phone call to book a car service and a little more wifi at the food court to book a hotel and we were done. By then it was 1:00 PM so I had to have a hotdog in the food court to celebrate. Julie notes “He is my organizing windmilling super hero! His kryptonite just happens to be hot dogs. Good thing he isn’t like Samson of the Samson and Delilah fame, as he then went for a haircut. All his strength would’ve been zapped.”

We headed back to the RV Park for the rest of the day. It was another busy day with busloads of various groups enjoying the water park.

These guys were ready for rain carrying a large sheet of roofing material over their heads in the mall complex. Julie notes “We were glad the wind didn’t pick up. They’d be over in Oz by now.” 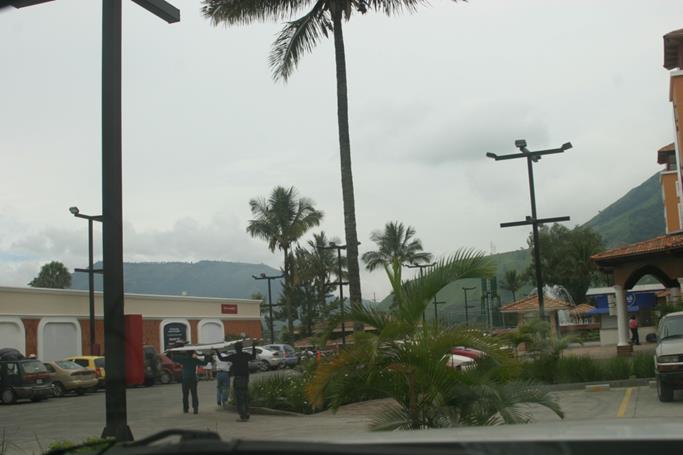 One of the groups enjoying a BBQ in the water park. Julie notes “Just like the Canadian BBQs, getting the grill going is an important job. Instead of hamburgers though, this guy cranked out a full course meal including at least 50 tortillas to go with the feast.” 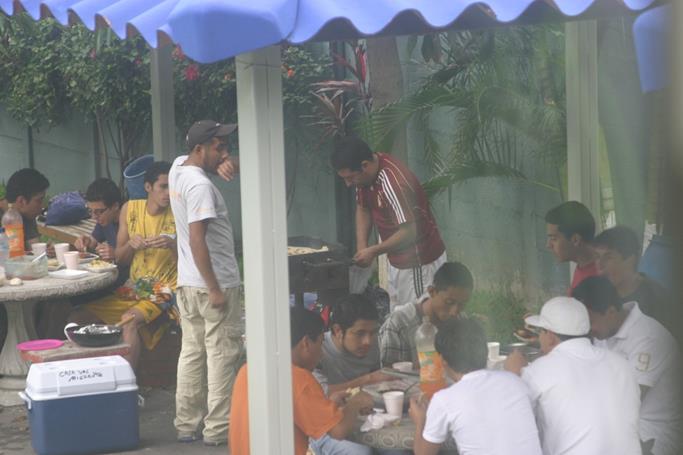 Julie notes “So the National Horn Honking and Whistle Blowing competition continued today with the addition of more torch runners and some chanting. We asked an English speaking lad, who was with a church group that came by to chat, about it. He confirmed that it WAS celebration on behalf of Quent and Krista’s birthdays and culminates on our anniversary on the 15th. Weird because we thought we had figured out that it was the work-up celebrations to the Guatemala Independence Day Holiday, on the 15th. No time to worry about that though. What do you think Brad has cooked up for our 34th anniversary? He is cleverly not sharing all of the details, perhaps as a surprise (or more likely in case things don’t go quite as planned). Either way works for me. (I have lists for recording both scenarios. Which one do you think is longer?)