Today started off as a great day but unfortunately we received word part way through the day that Julie’s Uncle Herb had passed away this morning after a courageous battle with cancer. Herb was not only a favourite uncle but a good friend. Julie and I, along with our kids, spent some great times with Herb and Lynne travelling the west or visiting them in British Columbia. Julie’s parents were able to join us on many of those adventures. We travelled with them on the Dhe Cho loop through Alberta, NWT, and BC in 2004. Our family also has great memories of our trip to the Queen Charlotte Islands with them from 2001. We had many other adventures with Herb and Lynne that have created some wonderful memories for our whole family. We will miss you Uncle Herb! Julie notes “Not much I can add to that. Many tears have been shed.”

We arose early this morning to catch our flight from Guatemala City to Flores to visit the Mayan site, Tikal. After a 1 hour and 10 minute flight we drove the remaining 60 kilometres to Tikal with our tour guide. We spent most of the day touring and climbing the ancient ruins of Tikal. We got word of Uncle Herb at the top of a Mayan temple; a very spiritual place; and were able to say our goodbyes to a really great guy.

Tikal is in the lowlands of Guatemala, not far from Belize, and it is much warmer and humid here than the highlands of Amatitlan. Julie notes “Our tour guide, Manuel, was very knowledgeable and in extremely good shape for any age but we are guessing he was in his 60s. Reminded me of Frank. The difference being we really liked Manuel. J We had 2 other English speaking couples in our group, from New Jersey and California. We bonded out in the humidity. Especially if you stood or sat too close to each other.”

Our tour included an overnight stay in the Hotel Tikal Inn within the National Park. It was a little more rustic than the Barcelo, let’s say, but clean and quite adequate. We had a private bungalow that only had power twice a day from the generator to add to the ambience. We had supper and drinks in the restaurant and a nice swim in the outdoor pool. We were able to see some different wildlife in the park and around the hotel – but none in our room to Julie’s pleasure. Julie notes “Just one animal to contend with if you get my drift. But it is literally a jungle out there and I was happy to keep it out there. I had Brad shaking curtains and peeking under stuff on recommendations from one hotel reviewer who found both a tarantula and a scorpion in their room. That’s at least 8 too many hairy legs in one room.”

The view of Guatemala from the air. 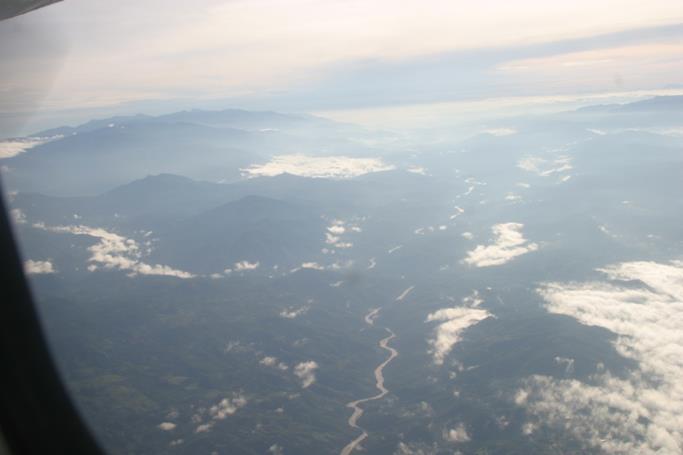 Our plane. The pilot is giving the thumbs up from the cockpit. 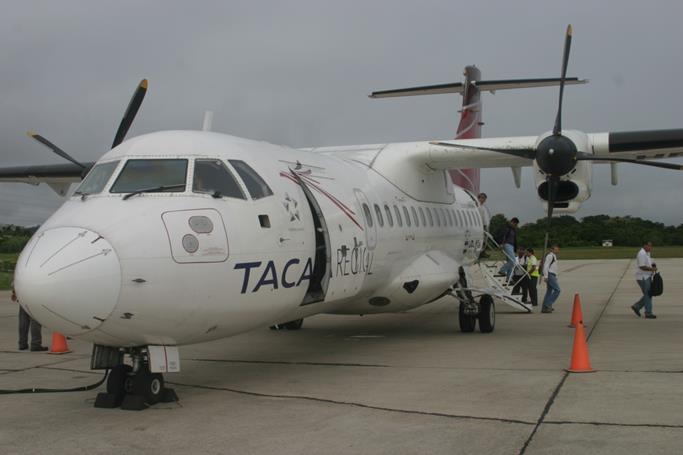 Some of the sites in Tikal. Julie notes “The first climb. Looks easy enough. Phewf! And that’s just the first of many. Those Mayans must’ve had excellent cardio function and the legs of Arnold Schwarzenegger. That explains some of the human shapes depicted in their carvings.” 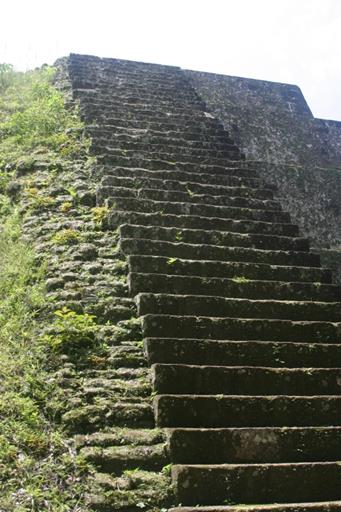 Julie notes “Brad found out the hard way that these are not ancient Mayan urinals but actually alters to different gods. It may piss down rain on us later thanks to Brad and that big pop he had on the bus ride here. Uncle Herb would like that story.” 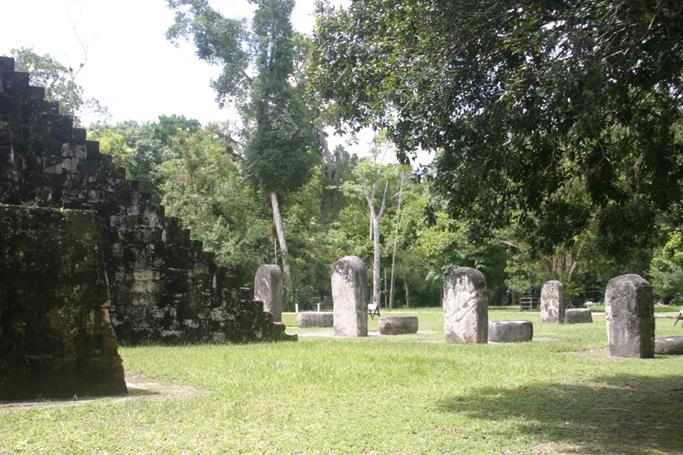 Julie notes “The KindasortaGuineaPig of Tikal.” 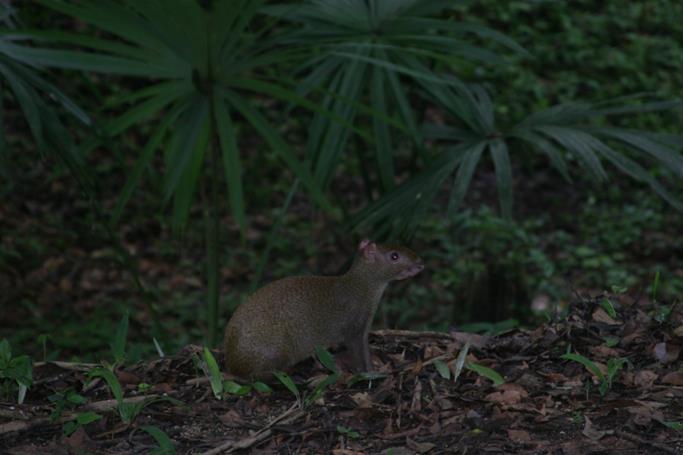 Julie doing one of the jungle hikes. Julie notes “Oh my god is that a spider web, what touched me, was that a spider web? Actually I only did the freak out dance once when some ants were angry I was standing on their trail. Jungle trekking lesson numero uno – always let several people hike ahead of you to clear spider webs but probably just anger the snakes. This ain’t no Jungle Book Mogli.” 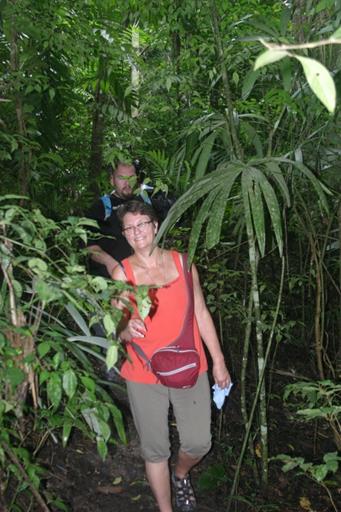 A spider monkey throwing avocadoes at us. Julie notes “They throw the hard unripe avocados, they’re no dummies. I was blessed with a shower of hard unripe small plums. I say blessed because there are worse things they could be aiming at us. Mesmerizing to watch though, but keep an eye on the tree limbs above you.” 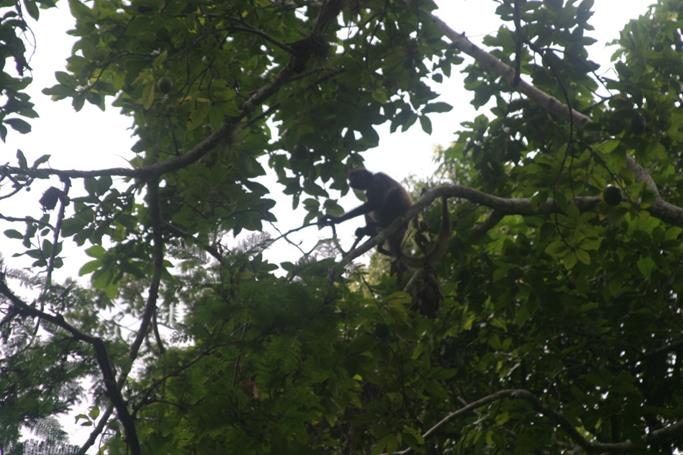 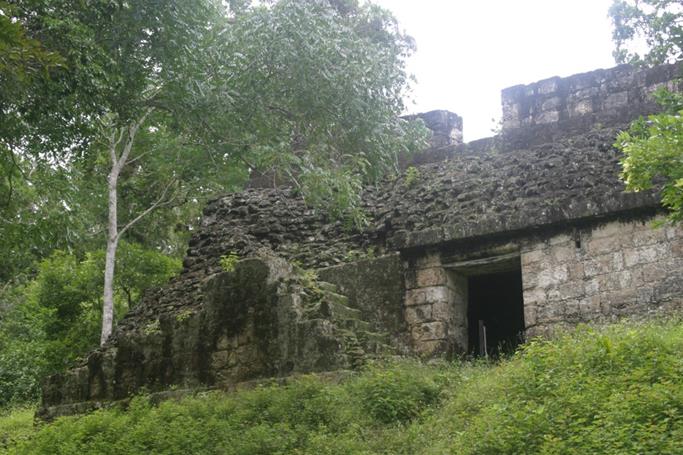 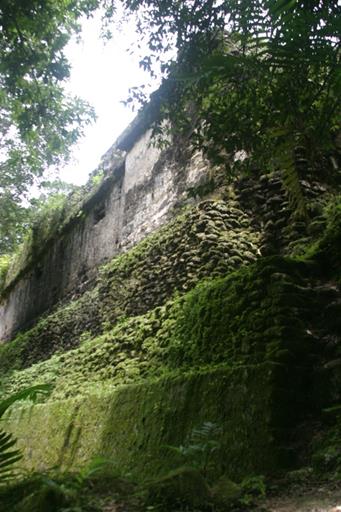 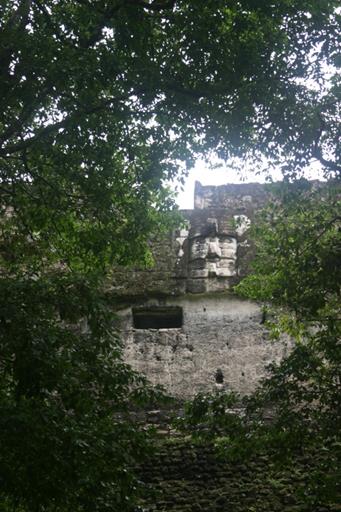 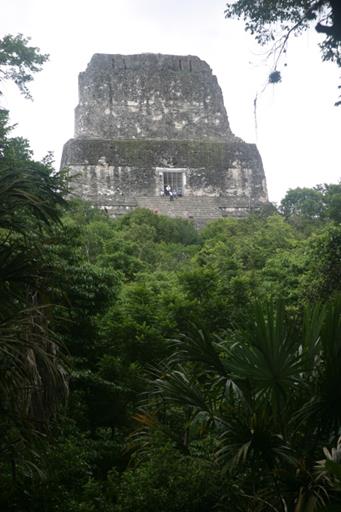 Julie notes “This shot is dedicated to Uncle Herb. This was where we heard the news and I think I can see you waving from that temple over there on your way up to that welcoming committee in the heavens. May you find gold every time you pan and may your adventures and jokes and tinkering and stories resume now that you are free of that stupid cancer.” 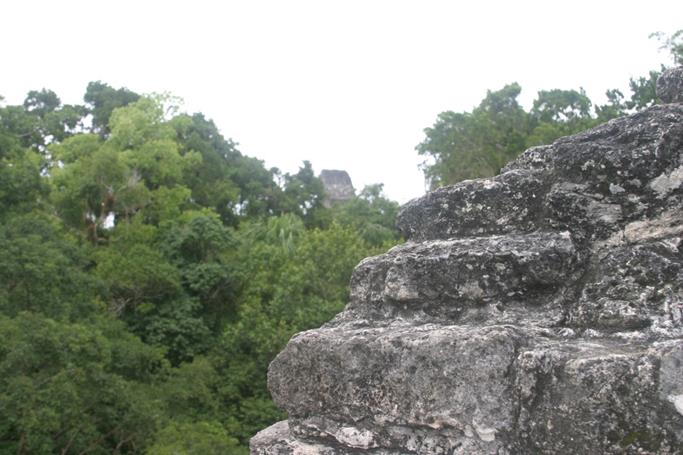 Don’t turn your back on her at the top of a pyramid. Julie notes “Too many witnesses. And there are some Mayan beliefs that there is a bevy of virgins awaiting the sacrificed males in the afterlife. That sounds like something he would like so I shall continue to make life here on earth with me a living hell, I mean living heck of a good time.” 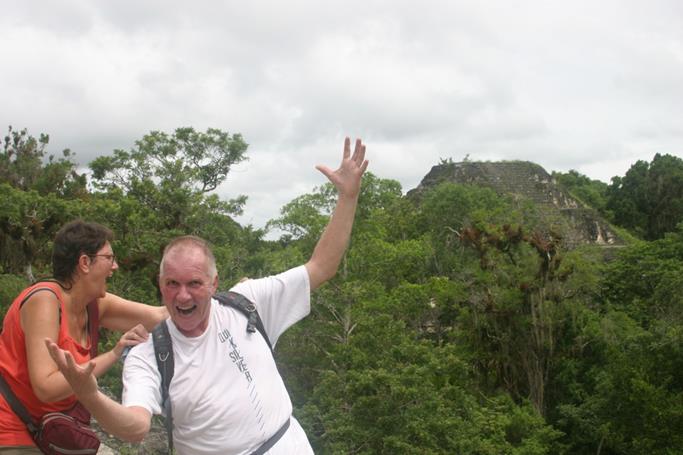 My Mayan Goddess of strength. Julie notes “Yes in more ways than one. I was beyond Goddess perspiration and well into jungle sweaty.” 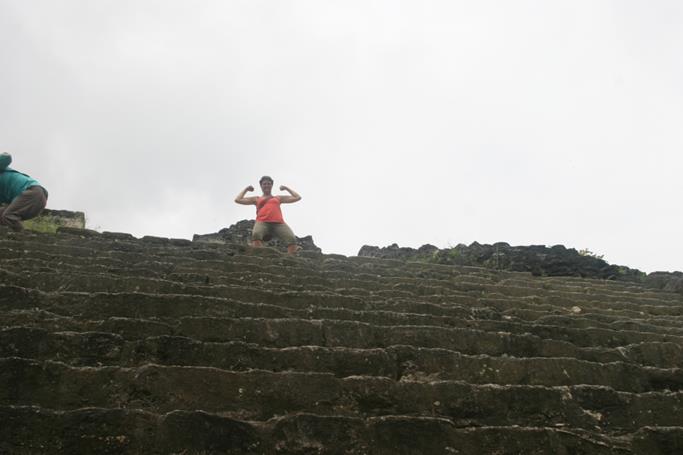 Julie notes “These are the native wingydingdo, not to be confused with the monkeys who wingdodotoo. We actually can’t remember the names but we do have written down somewhere.” 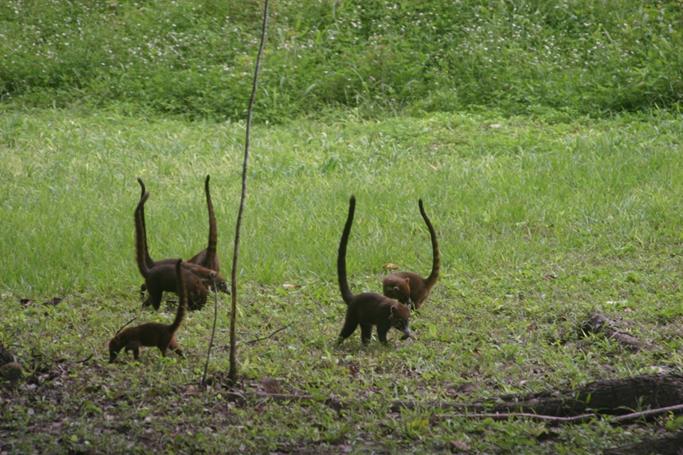 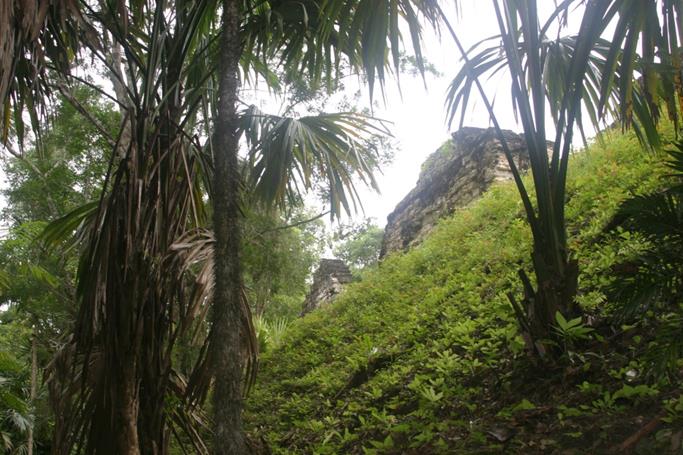 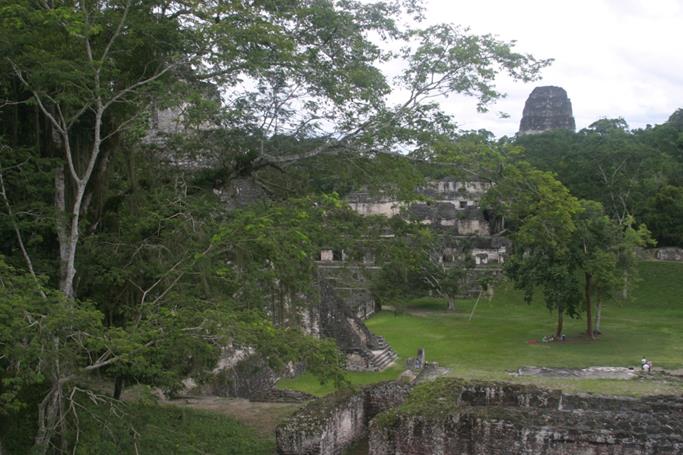 Celebrating the last big climb of the day. Julie notes “I think he is singing ‘Hey, hey I’m a monkey, people say I monkey around, but I’m too busy climbing pyramids to put anybody down.’ Just a guess. What do you think?” 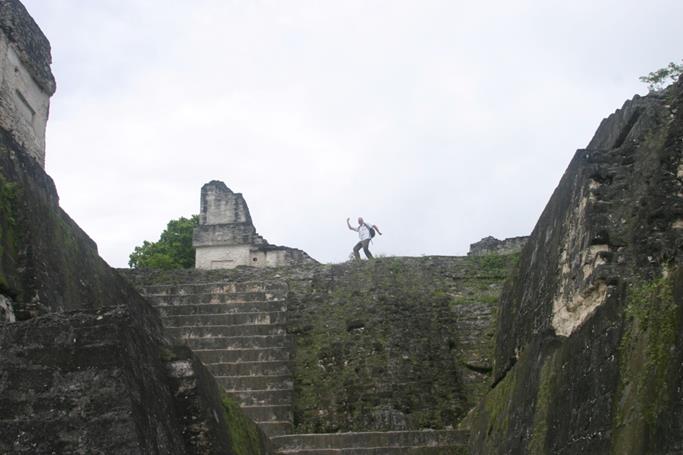 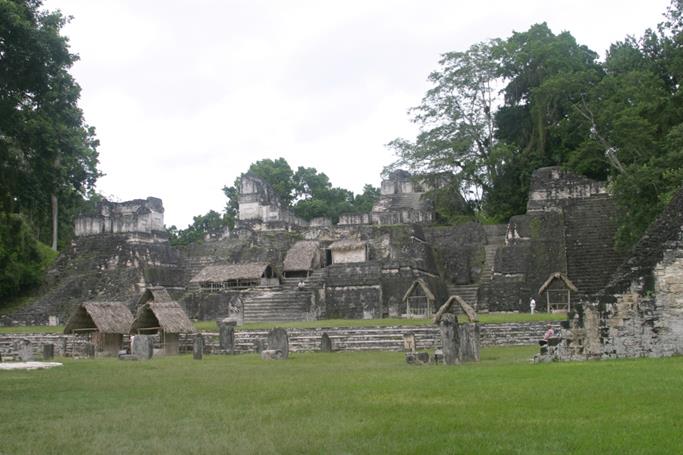 We are hot, sweaty and tired but still give Tikal a definite thumbs up. Julie notes “Does this temple make my butt look big? Don’t answer that. I won’t care about witnesses next time.” 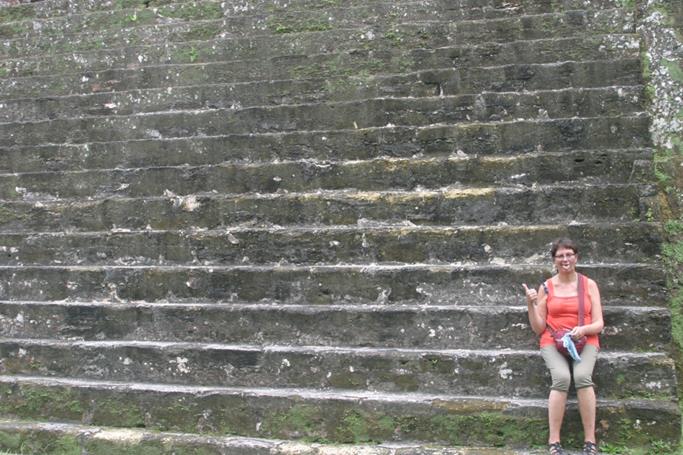 Julie notes “My favourite temple. Just because it was.” 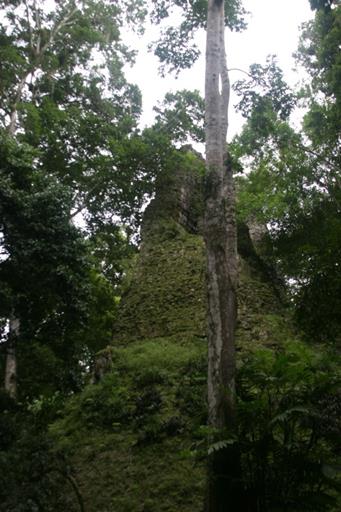 …over and out for today, the muleskinner and his Mayan goddess sidekick.

Miss you Uncle Herb and thinking of you Aunt Lynne and family. Julie notes “More tears.”