We woke up this morning in our bungalow at the Tikal Inn within the Tikal National Park. Julie notes “We did giggle a little as we heard the ‘sunrise tour’ group leave at 4:30 in the morning to hike the jungle and ‘catch the sunrise’ from the top of the big temple. They obviously didn’t read the fine print that said there was slim chance of catching the sun rise in the jungle mist in the dry season but no chance of seeing it now in the rainy season. Oh well they were young. But they may never recover from their ‘howler monkey in the pitch black jungle’ experience. Upon return they told us it sounded like they were surrounded by many screaming Tyrannosaurus Rex. They scrambled into their rental car tired, slightly disappointed about their failed sunrise quest but fairly convinced that they had stumbled across another Jurassic Park.”

We enjoyed the hotel version of an American breakfast that was included with our stay. Julie notes “Brads childhood banana trauma has kept him from trying the fried plantain that accompanies many meals. It is really quite tasty. Please help me convince him that people will not call him a monkey like they did in grade one if he eats some bananas or plantain. (We will just make silly monkey noises and gestures behind his back.)”

We lazed around the bungalow and the lobby for most of the day. We each went for a walk and I had a swim in the outdoor pool. We chatted with a few other guests who are few and far between in this off/rainy season. There are far more staff than guests. We had a chance to catch up on the blog and write some emails. We caught our shuttle back to Flores at 2:30 or so and were at the airport in plenty of time for our 7:55 PM flight back to Guatemala City.

After arriving back at the Barcelo, we went to Strikers Pub for some drinks and snacks. It was at least 11:00 PM by the time we got back to our room. That is a very late night for us lately.

Julie and I were reminiscing about Uncle Herb last night over drinks and snacks. We realized what an influence he was to us in our adventure travel. After some more reminiscing, I realized that it is probably Uncle Herb’s fault that I took Julie on this adventure so we have agreed to blame him for anything that goes wrong. Sorry Uncle Herb but it’s your own fault. J Julie notes “I am now shaking my fist at the heavens. I can see you laughing as if it was one of your great practical jokes. You got me good Uncle Herb!” 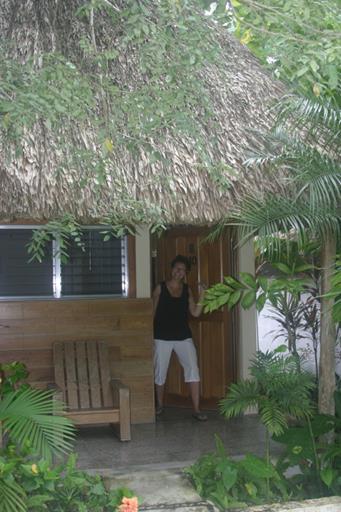 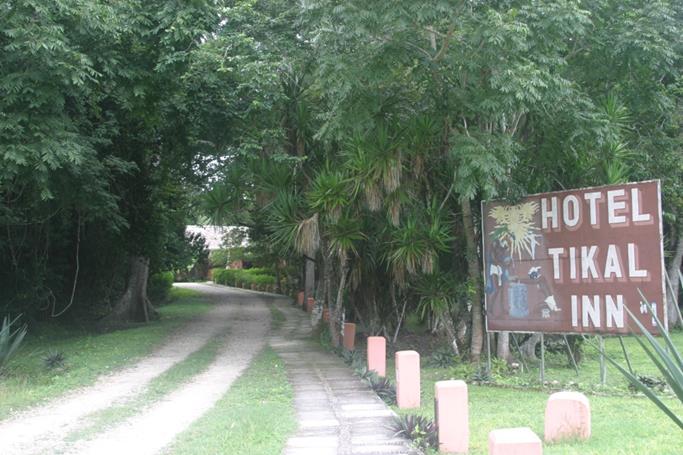 Julie notes “A larger version of a bath tub since they only had a questionable looking shower in our bungalow.” 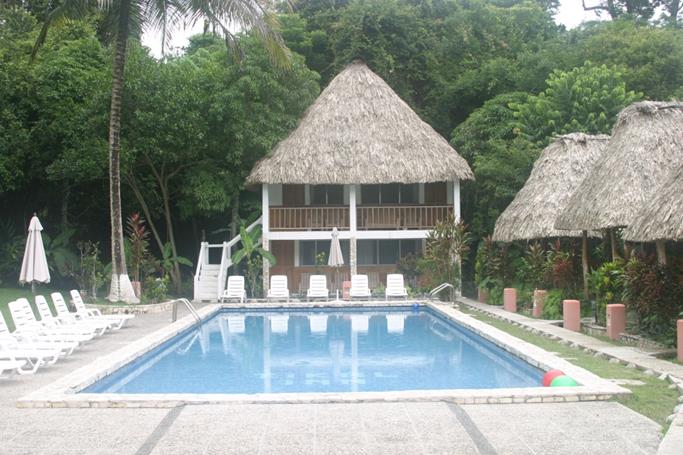 A tropical example of a plant that Julie once killed. Hers was the same variety but looked nothing like this. J Julie notes “True that. I was able to reduce it to a mere pile of coloured leaves in a matter of months. It is weird, the gardeners around here are kept very busy trimming back plants instead praying over them, begging them to grow, like I do.” 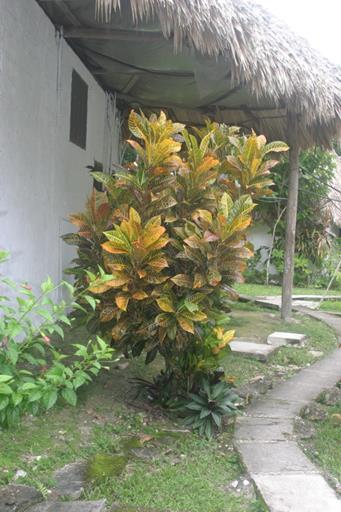 The puzzle question for today is to identify this plant common to the tropics. The first person who correctly identifies the plant wins some of its fruit. Julie notes “We will transport it back in the fruit catching area on top of our camper and deliver straight to your door. And speaking of contests, we are still waiting for a correct answer to our last colourful puzzler. We have had a few colourful guesses though. Keep them coming. It is possible we may eventually leave this campground and get back on the wandering route headed towards our homeland. (Although we will miss the burnt garbage smell wafting in on the breeze and the daily low flying helicopters and the required honking at the chicken bus stop, we’re sure there will be more delights awaiting us.) But if we do leave we want to make sure we have the colourful or unpainted (remember your choice) prize for the winner with us.” 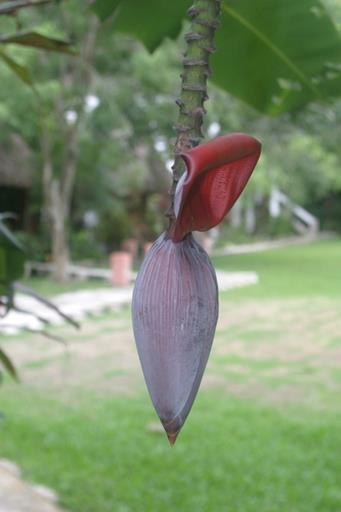 ..or identify this spider if you want one of those instead. Julie notes “It is hard to gauge the size of this puppy but it is possible it could eat a puppy, a small one anyway. If you look closely you can see the smaller regular size spiders around it. Babies? Thank goodness Brad noticed this at the front door of the hotel as we were LEAVING the jungle.” 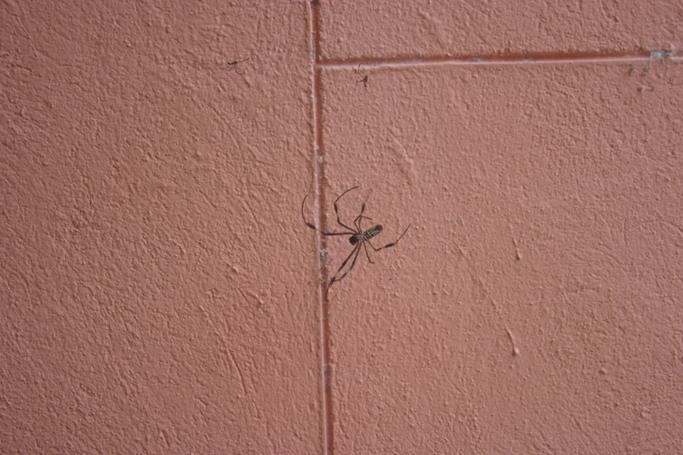 And as coincidence would have it, they served a big bowl of popcorn in the pub. Herb was famous across Canada for his delicious “secret” recipe popcorn. Only a few great nephews hold the secret to his popcorn and have vowed never to reveal it. This was what prompted our reminiscing. Julie notes “We ate every last crumb just for you Uncle Herb! It was actually pretty good but not ‘secret recipe’ good.” 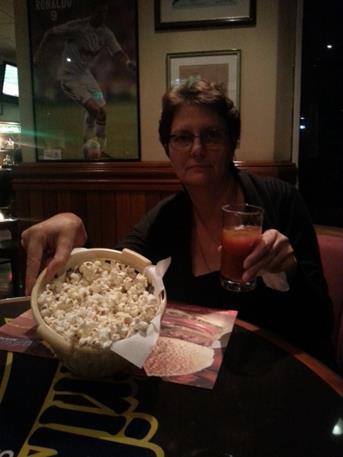 Julie notes “Brad gets mostly high marks for this anniversary get away. The travel arrangements all went smoothly. The Barcelo was a beautiful retreat from our little camper. The experience of seeing the Tikal sights and working hard for it was priceless. It felt like a great accomplishment. Our guide Manuel was great. Our Spanish speaking co tourists were jealous of the detail and direction we were getting. The jungle surroundings were just beautiful in their special hot and humid way. Sweating here just seems like the ‘cool’ thing to do. The food was great. I had the most amazing pork chop (or maybe they said Guinea pig chop) with a fruit sauce with all the fixings for lunch provided as part of the tour. Mmmm yummy The staff were very pleasant, bi-lingual and again willing to help us with our Spanish. A few glitches between the tour package and the hotel, mostly due to their lower tech systems at the hotel but ironed out easily and amiably. Our bungalow was good for being out in the jungle. I even liked the no electricity quirks. I liked the open air design with the big high ceilings and fans and hearing the animals rustling around and making their jungle noises, all thankfully on the outside of the room. (Brad was making enough noise on the inside of the room. His jungle snore may have been what set the howler monkeys off but possibly kept the jaguars at a distance.) The drawback to me was the musty smell and the slightly sketchy shower. But in that climate with no air conditioning that is to be expected I guess. It looked like the bedding was all line ‘dried’, at least there was a big line of someone’s sheets and towels in the work yard behind us. A few things around the hotel could use some upgrading but perhaps that is part of the jungle charm people are looking for. So all in all an amazing side trip for this sidekick and Brad’s contract will be extended for one more year, for better or for worse. J.”