We left Antigua this morning shortly after 7:00 AM heading for the town of Panajachel on Lake Atitlan in highlands of Guatemala. The town is ~1,600m (5,250′) above sea level. Some of the mountain passes we travelled today were over 2,600m (8,530′) high. The mountain scenery and the view of Lake Atitlan on the narrow windy decent to Panajachel is quite spectacular. Julie notes “I have had a bit of a head cold so the mountainous roads played some havoc with my inner ears. At one point, when the pressure was released, they actually squealed. Brad said he heard the noise even from his side of the truck and would back me up when I told this story in front of a large group at a party or somewhere. Now if you know us you may have heard the story of Brad’s supposedly squealing ear drums on a plane, which I supposedly said I heard and then possibly denied in front of a large group at a party. My experience today was however real and I just know Brad will verify that the first chance he gets.”

We are camped near the ferry landing but so far I have avoided any confrontations with the ferry operations here. Remember San Jorge on Lake Nicarauga? If you missed that story you can read about it on our Day 70 – Beached – Part III here http://muleskinner.ca/2013/09/06/day-70-beached-part-iii/

We walked through the town streets this afternoon and were lured into a restaurant by the very outgoing spokesperson coaxing us away from the neighbouring competition. Rule #89; Don’t let personable restaurant spokespeople lure you away from the competition. Lesson learned. Julie notes “I may need to claim a little, well okay all of the blame for that. I am a sucker for a smooth talker with a mustache. So much so, I’m surprised I’m not married to that Magnum PI guy. The red flags were there that I was leading Brad down the path to a bad pizza but I was blinded by his earnest plea to choose them over the neighbour (who had a wood fired pizza oven for goodness sake). Oh well. Luckily I chose Brad back in the day, as I don’t know if that Magnum guy would’ve forgiven me the canned mushrooms, shrimp with shells and crust, not really sure what the crust was made of. Central American handbook Lesson #89.1 ‘Order the local specialties, just like anywhere else in the world, it’s what they’re good at and it’s usually yummy.”

Oh yeah, this is the answer to the mystery question the other day; a large concrete sink, usually outdoors. Julie notes “No winners, so no cement giant sink on the top of our RV to explain to customs. While that ‘sinks’ in, Aunt Doreen correctly answered the banana flower question but instead of bananas would apples be okay as prize? Just before clicking this shot the camper drove under an apple tree and were showered with ripe apples. The next few corners we had more drive by fruitings as the apples rolled off.” 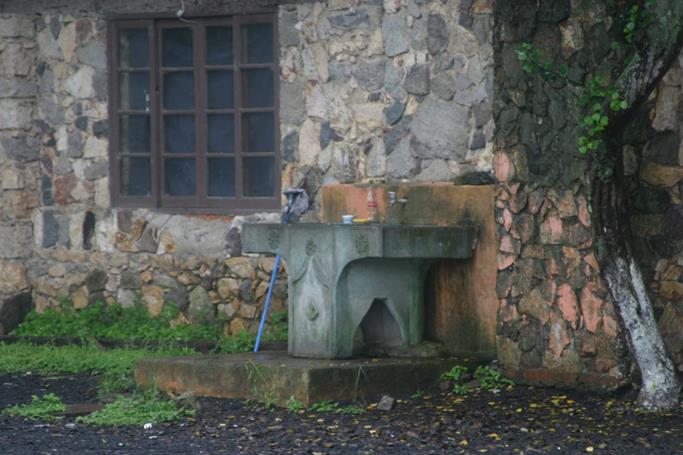 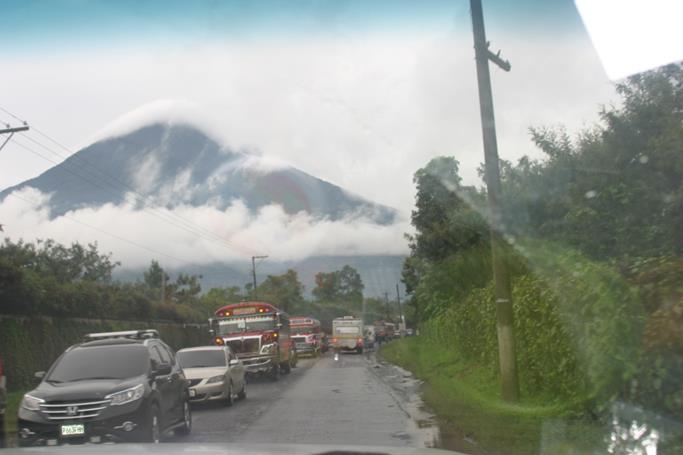 Mountain scenery along the Pan-American highway. 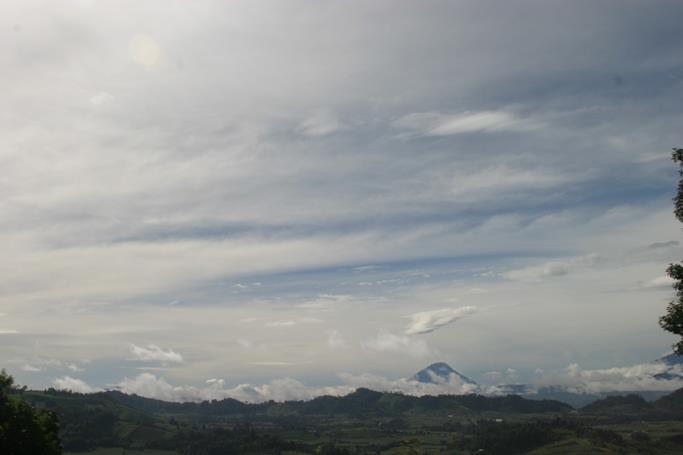 Taking a break along the way. Julie notes “There was a large pen with a squirrel and several rabbits on the grounds of this restaurant. I asked one of grounds men, in my slowly growing Spanish vocabulary, if the rabbits were pets or food? He said ‘oh mascota’ pets. Then a couple minutes later we find out rabbit is most definitely on the menu. Hmmmm maybe he was just sparing their feelings while they were within earshot. With those big ears you’d have to be careful. And does that also mean sometimes squirrel is on the menu? Hmmmm” 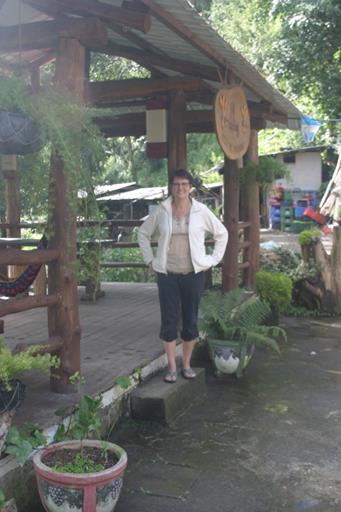 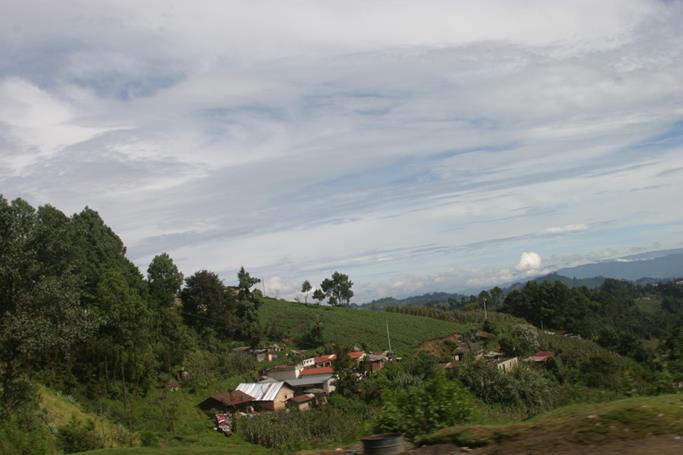 Lake Atitlan Julie notes “This is where our friend Merriam, who travelled most of the trip with us, was from. She had told us she lived on the most beautiful lake in Central America and I don’t think she was exaggerating.” 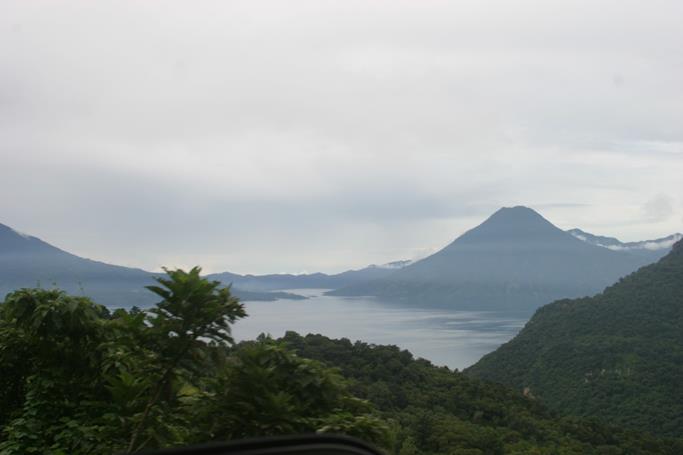 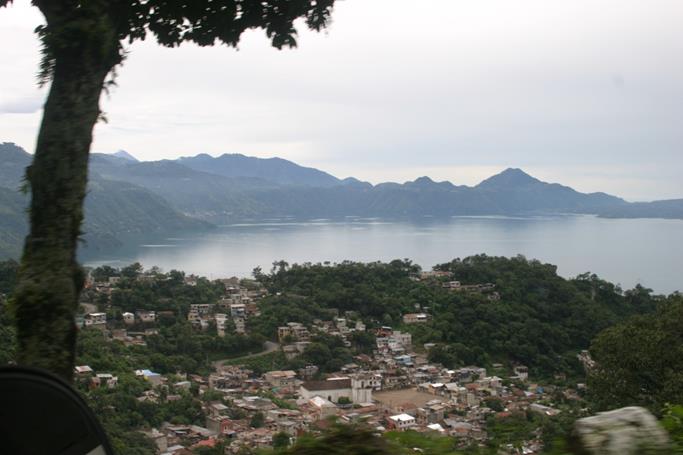 A mom with her hands full and the little guy checking out things behind her. Julie notes “Even the babies go gaga when they see ‘the unit’.” 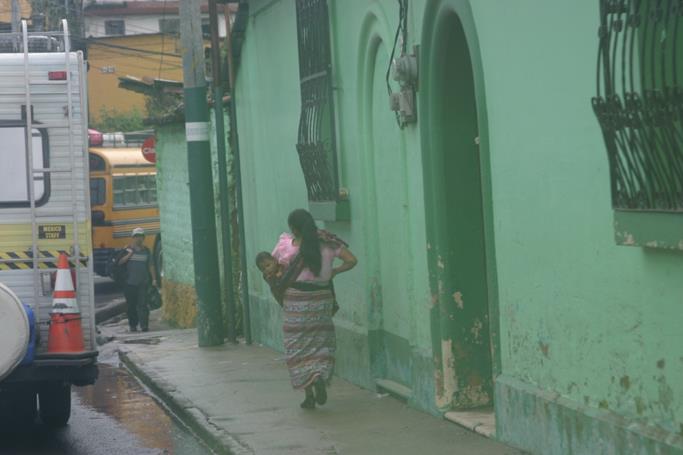 We walked back downtown to Jose Pinguino’s for dinner. Trip Advisor rated it highly plus our daughter Kristin really likes penguins. The food was so-so but the entertainment by these three girls playing marimbas was outstanding. 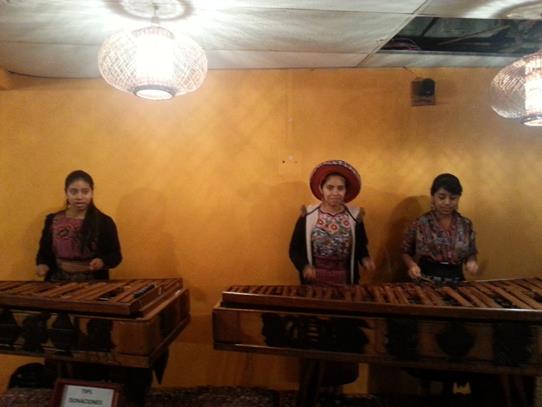