We left the border shortly after Julie and I were able to get our immigration permits to enter Mexico. It was the same guy dealing with us. It was still a slow process but much faster than last night. I promise I will never ever complain about the Canadian – US border again. Julie notes “Well you know that will just mean he will find something else to complain about. But of course nothing about me as I am perfect.”

We arrived around noon and completed a few errands at the mall in San Cristobal. Instead of taking a taxi from the mall into the heart of the city, our guide decided we should drive into the city and see if we could find a parking spot. DO NOT DO THIS. Julie notes “DO NOT DO THIS!!!” We were instructed to drive about 6 blocks one way to a market area while he took a different route to try and find parking for RVs. Julie notes “WHY DO WE LISTEN TO THIS GUY? But we did.” After the 6 blocks we were forced into some very narrow streets with lines of cars behind us. The first obstacle was having to climb a 12″ curb to skirt by a poorly parked vehicle. Then the nightmare really started. Streets got very narrow, Julie was getting lines of vehicles to back up while I tried to allow oncoming traffic to pass. Julie notes “This is really outside my comfort zone but enjoyed all the honking and can now add ‘traffic control’ to my resume when I need to get my new job to pay for the vehicle damage.” I apologize to the building owner whose eave that used to hang over the street and is now partly missing. Please just keep the plastic trim from my awning in exchange. There may also be other damage in various areas of San Cristobal from my camper jacks. It was simply not possible to stop and see if there was real damage or not. After an hour of street rodeo, we made it back to the mall parking lot. Julie notes “We deeply appoligize! If you are reading this, Damaged Property Owners, we will give you the name and email address of our guide who directed us down there and I am sure he will happily cover any costs. L”

We checked Trip Advisor for a good nearby restaurant with the criteria that it was within WALKING DISTANCE. Having found such a place we headed down a kilometre of side streets only to realize the location on the Trip Advisor / Google map was incorrect. Julie notes “We can’t blame our guide for this so we will blame the Google Maps guy. I bet you he has some kind of camera attached to his mapping system and laughs and laughs when he sees people like us wandering aimlessly about asking pharmacy delivery guys on motor bikes if they can help us. He said and I quote ‘take a taxi’.”

We headed back to the mall and hailed a cab to the city centre. From there we again checked Trip Advisor and found a highly rated restaurant that actually was within walking distance. Lucky for us because by that time we really needed a drink! The food was fantastic and its rating on Trip Advisor was well deserved. I think it was called TierrAdentro. Julie notes “Well we almost didn’t make it to this one either as Google maps was slightly off and Brad’s Spanish is slightly off and when we asked directions from a fellow on the street he was really not sure what we were looking for. I said, in my calming, practical manner ‘Let’s just meander a bit further down the street before we give up, my darling honey bunch. I do believe I spy a few more eating establishments in that direction.’ And low and behold. There it was. (this may be paraphrased somewhat). It was a great find. I am not sure what we were supporting by eating there. Seemed to be a bit of an underground vibe but we’re cool man.”

Camping at the Guatemala/Mexican border – not in either country really. We had exited Guatemala but not yet entered Mexico. What do you call people with no country to call home? Julie notes “I think the answer to that currently is ‘The Emonds”. 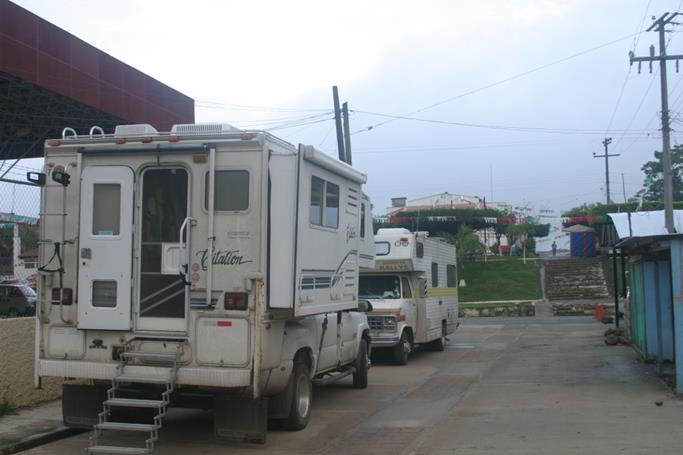 Julie finally saw a macaw or toucan or some kind of bird she had missed in Tikal. Julie notes “See I knew he hadn’t actually seen a real toucan or he would recognize this one perched on top of this gas market sign. It almost looks unreal with that circle around it and then jungle and clouds building behind.” 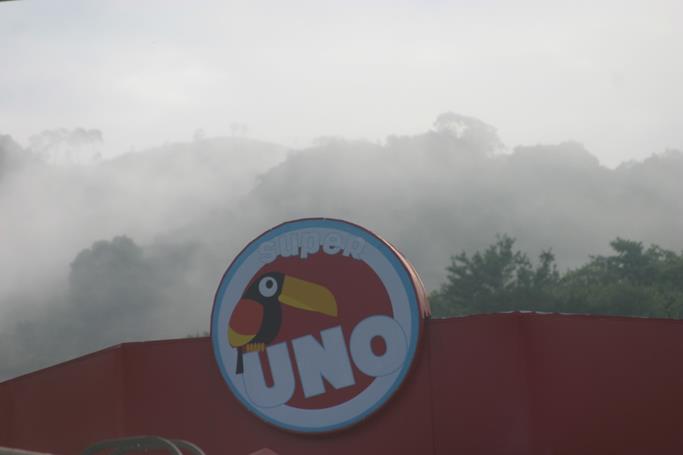 We think this was a well where a mother and daughter were getting water. Julie notes “Yes just after this shot she swung the white and green container up onto her head. These containers are fiberglass and not pottery but try carrying one on your head for a while. If you want. Lots of corn here of course and it grows ‘as high (and probably higher) as an elephant’s eye’. Who knows what musical that is from? Hint I was in it in high school and played the part of ‘chorus girl with one line, that she didn’t project loudly enough’.” 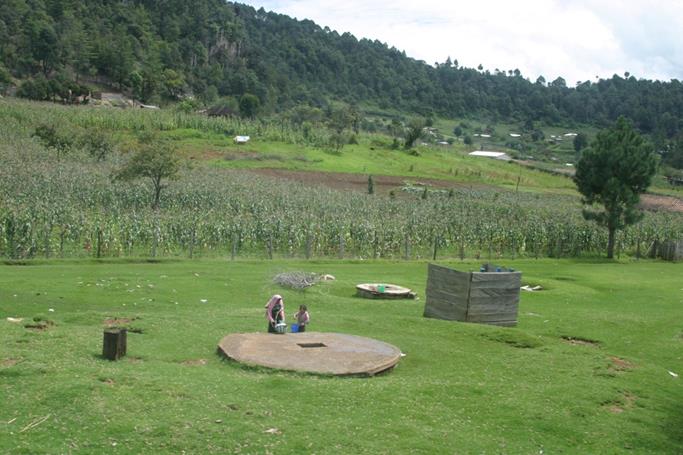 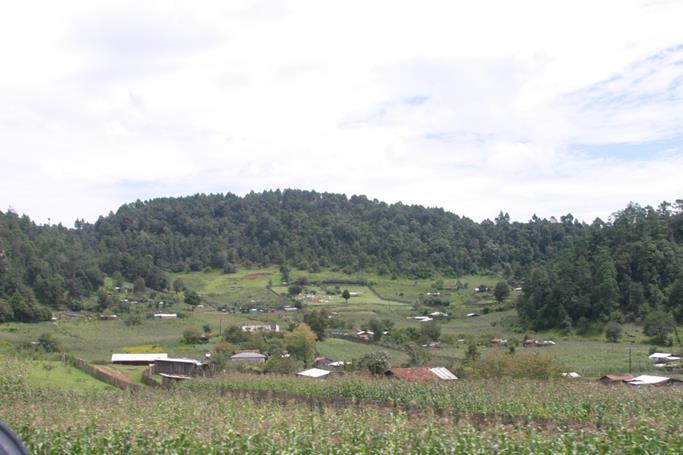 Water fill day at the mall. Julie notes “Glug, glug, glug. A nice fellow from the water company is holding the funnel (In case you thought Brad had 3 hands) leaving me free to do the hard job of taking pictures of them.” 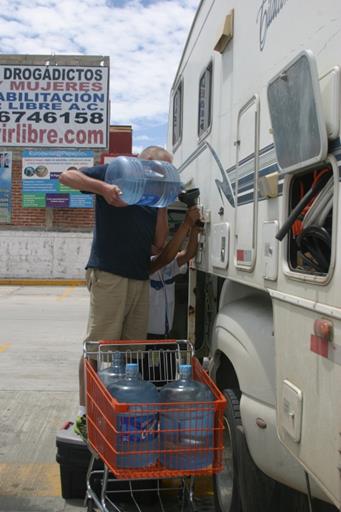 A wide street in San Cristobal. Due to the state of extreme stress we were unable to take pictures of the narrow streets. Julie notes “I wanted to but even I knew that might cross the limit. And notice the clouds building, inside and outside of the truck.” 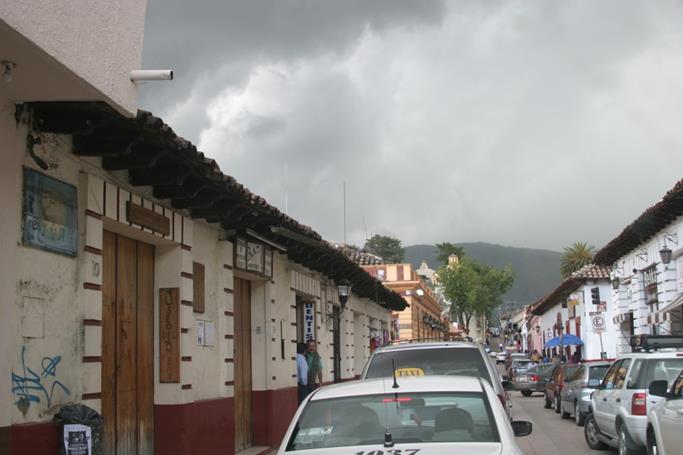 Julie notes “And what’s a disaster story without a good flood. The streets were running with water. But to the folks here this is just a typical afternoon downtown. (Except for that Gringo and his big ass truck stuck in the streets).” 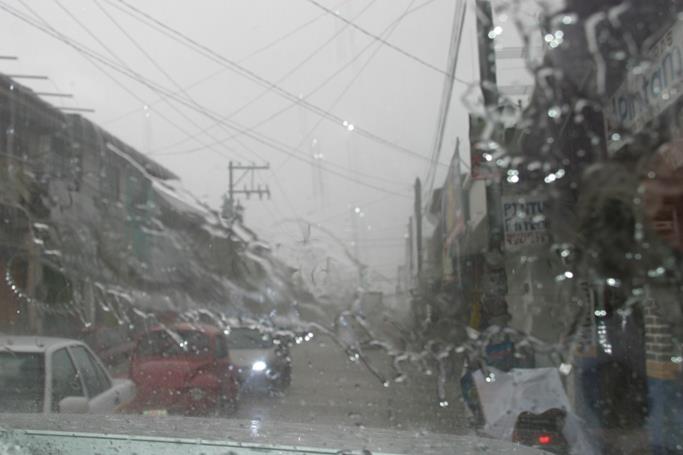 Dinner at TierrAdentro restaurant Julie notes “Okay they called this a marguerite but really it was just a really big tequila shooter. I was ddddrrrrrrrrrrrruuuuuuuunnnnnk. Fell asleep sitting up waiting for Brad to complete his blogging portion.” 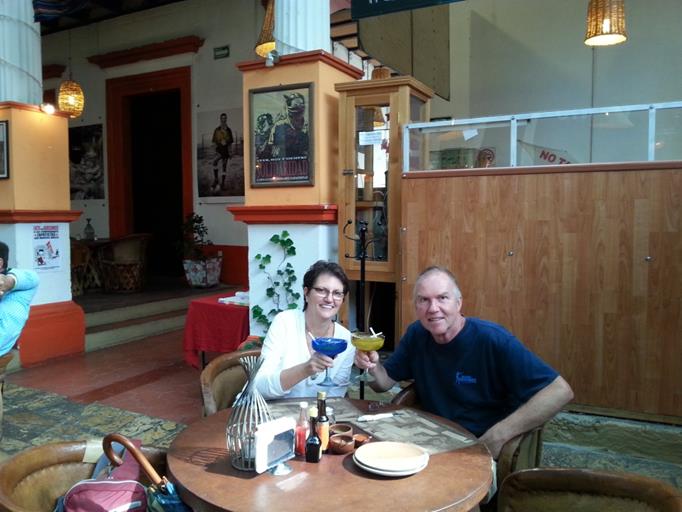 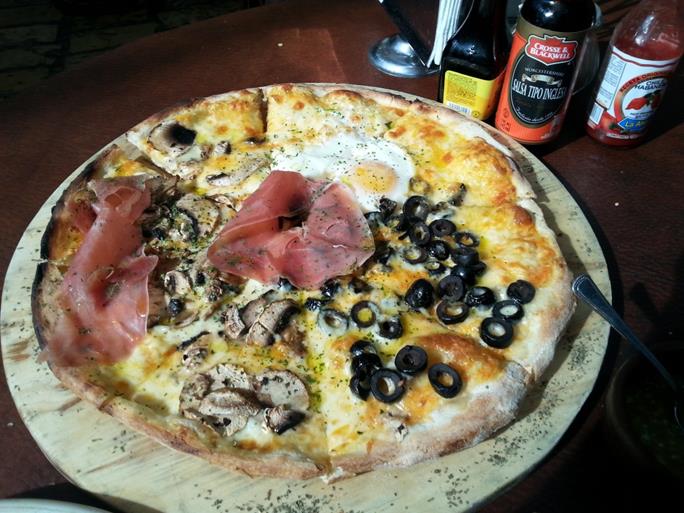 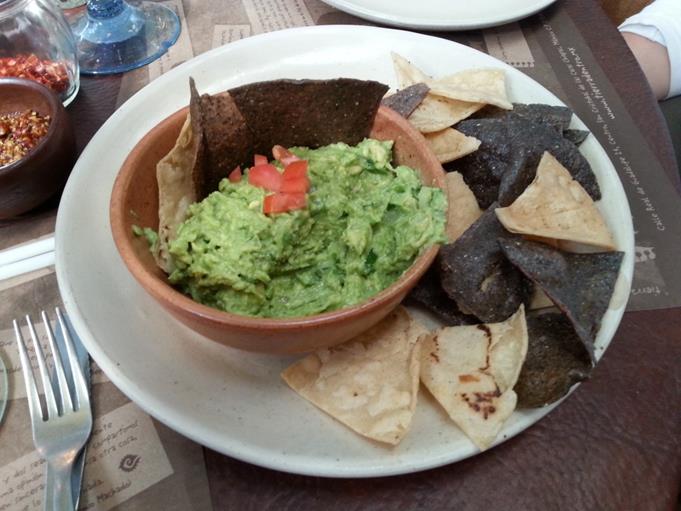 And our final advice for today is “Don’t go to this guy for your dental work, OK?” Julie notes “Seriously? Who would let this guy near your mouth?” 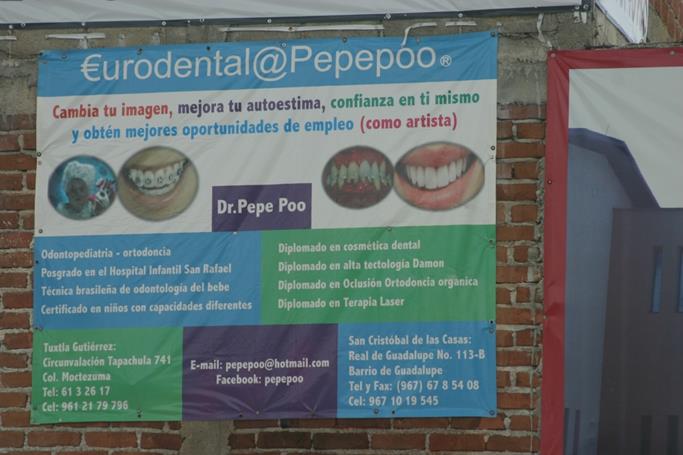 Julie notes “Time for a new phone card now that we are in Mexico. It has been quite the phone service experience since we bought our unlocked phone in El Salvador. Trying to understand the plans and get data and some countries only allow text within the country and buying lots of data or not enough data and not understanding the Spanish warning and update messages coming into the phones and we’ve received only 3 phone calls but we still aren’t sure how to answer them on this phone. So don’t call us. And don’t call us and leave a message because we’re not sure how to get those either and do you suppose they translate them all to Spanish? We’ll never know now will we?”