We’re back online. Sorry for the big gap between posts but as I said, Julie promised to make these posts worth the wait. Julie notes “Oh gee thanks Brad! No pressure there!” Firstly though, Happy Birthday to my two younger brothers (twins) Danny and Donny to family, Dan and Don to some, Daniel and Donald to most. Born 3 minutes apart on September 27, 1956 makes them 57 years old today. Julie notes “This is also my Aunt Lynne’s birthday who also goes by other names like Lynne and AL and is possibly best known from her time as a Queen Charlotte Island Star ‘Peeler’ along with my mother. They were a team actually but for more details on that you will have to wait for my other book ‘Family Secrets and Why They Should Remain That Way.’ This was the first of many firsts without Uncle Herb there in body but I’m sure in spirit. He was probably trying to find a way to put trick candles on your cake. Sounds like you were surrounded by love for the day.”

Julie notes “Okay, buddy let’s back this story waaaaaaaayyyyyyy up to the wee hours of the morning and even the evening before. As usual Brad has skimmed over a few details in his summary below. There was a large old church in the square we parked at and we had been treated to some loud and enthusiastic bell ringing interspersed throughout last evening as a long and well attended church service was being held. There was also a marching practise for some of the local government workers. They must’ve been preparing for an upcoming event. Or maybe they considered us visiting dignitaries and it was for our benefit. If so, then THANK YOU! They were having quite the time keeping straight faces as they marched down a ramp and rounded a corner, where that one guy, you know who he is, keeps goose stepping out of turn. Our alarm was set to go off at 6 AM so we closed our eyes and ears to the murmurings in the plaza around us and hoped the heat and humidity would drop a bit for a better sleeping temperature. We started to hear the town coming to life a little after 5 AM but thought it was just folks up getting ready to beat the heat of the day, until we heard some gentle ‘tap, tap, taps’ on the front door. Brad again answered in super hero mode and explained to the fellow at the door that the police chief had authorized that we could park there for the night. And closed the door hoping he had gotten his point across in Windmill Gringo style. But we were awake at that point so Brad starts going through his morning packing up routine and sees that we are now surrounded by about 50 people milling about, all looking a bit miffed about our camping location. Now first thing that comes to our mind are the rotating protests that we had seen in the bigger towns we had passed through. We quickly got things closed up enough to move down the block, out of the way. But in the end, it appears it was not a protest but an extension of the church service from the night before that started at 6 AM out in the square beside where we had been parked. Yes 6 AM! It lasted a couple minutes and then folks went on their merry way. We should’ve maybe stayed put and we could’ve been blessed as part of the service and our day may have turned out better. But moving was better than being cursed by the folks who felt we were in their way. We cannot easily blend in but we can do our best to not be a bother.”

Our goal today was to drive to Tecolutla, MX, however, because of the labour dispute and revolving protests happening throughout Mexico we only made it to Aguilera. The protesters had blockaded the major roadway we were traveling. The traffic backup of trucks was probably 15 kilometers long. Before arriving in Aguilera, however, we crossed the isthmus of Mexico from the Pacific side to the Gulf of Mexico side. It is known for its extreme winds and we had secured awnings and hatches the night before with duct tape. As it was on the way south, we had no wind again in this area.

In the very small town of Aguilera, we found a little Community Park to camp in and the folks there made us feel right at home. They were very friendly and accommodating and couldn’t seem to do enough for us. One large extended family had taken the day off from their masonry construction business and was celebrating in their backyard with food, drinks, music, and laughter. Every time we walked by they invited us in to join the festivities.

It was very hot today, well over 30C, and we ran the generator and AC for most of the afternoon. By late afternoon, the protest blockade had ended and traffic started moving but we stayed in Aguilera for the night hoping to move on in the morning.

We went to a local family run BBQ place on the highway for a meat lover’s special – sausage, chicken, and ribs. Julie and I shared a plate and still had some left over. They grill all the meat on a wood fired homemade brick and steel BBQ. The sausage is hung above the grill and smoked until it is ready to grill. Julie notes “This is where that old Christmas poem originated ‘the sausage was hung by the chicken with care, and the ribs were all seasoned for meat lovers to share’

Large wind generators on the west side of the isthmus of Mexico. Julie notes “Once again it was not windy through this pass making us think our guide might be full of hot air. But I guess the person that decided to place all of these windmills must know something too.” 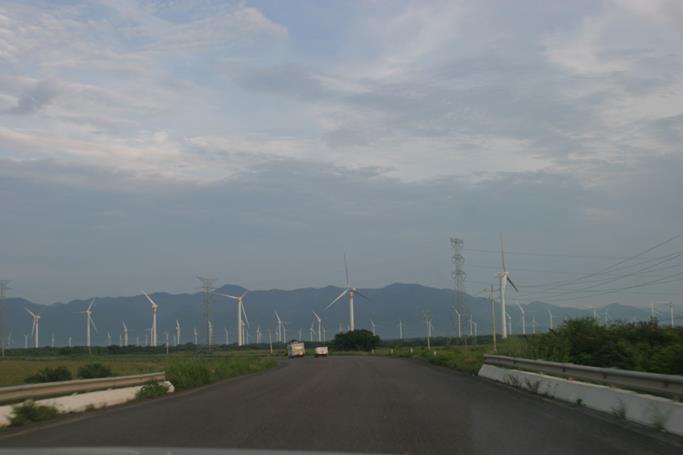 Scenery along the highway 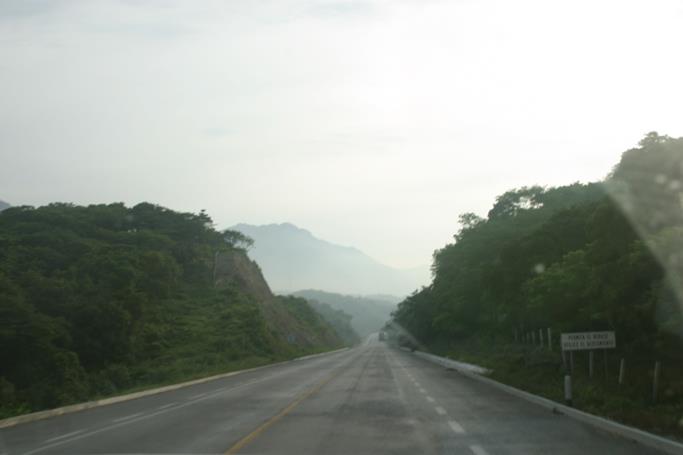 They large “speed bumps” or topes are called “reductors” here but they have the same effect. 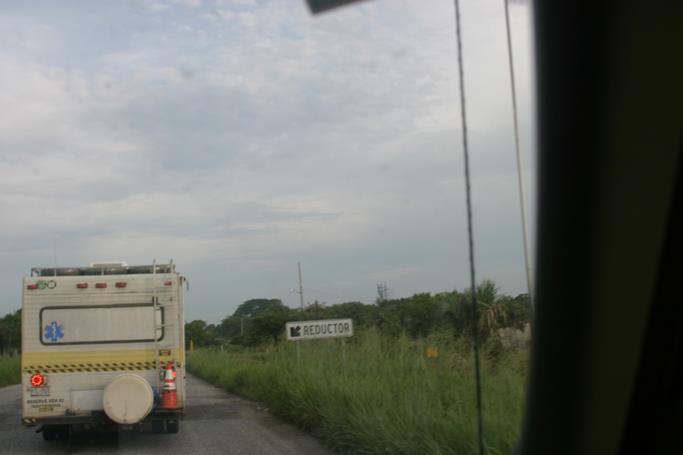 No, it’s not our leader, Norm, it’s the rear end of some cattle in a truck but I can see how you would be confused. J 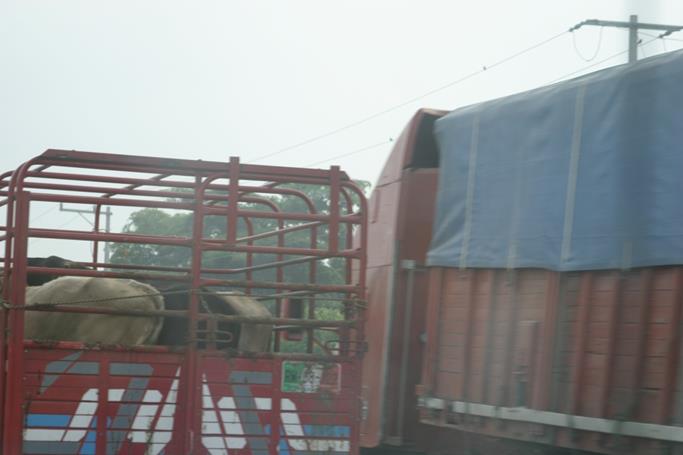 Julie was tempted to make a side trip to her namesake Mexican town but I convinced her to keep on truckin’ northward. Julie notes “I bet it was an absolutely beautiful and charming place otherwise they wouldn’t have chosen that name.” 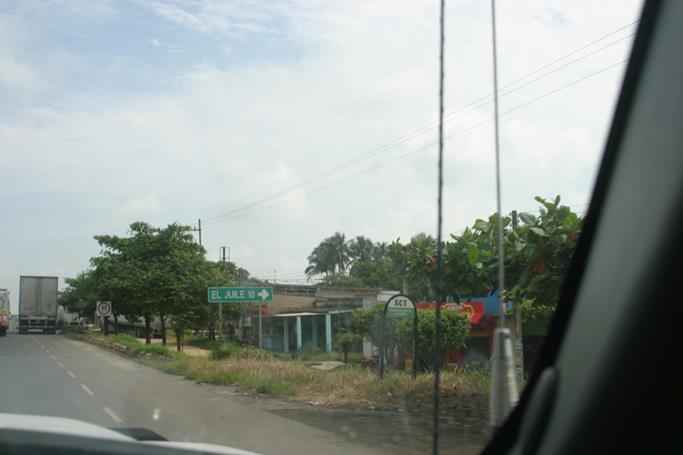 The results of the blockade. This was approximately 15 km from the actual blockade. 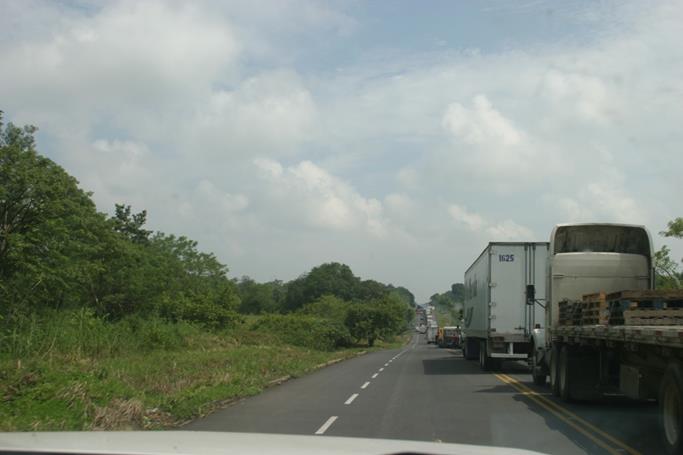 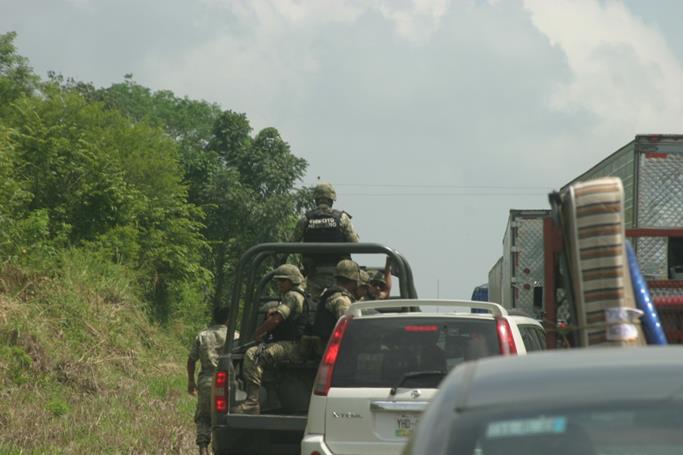 Julie notes “As you can see above, even the people with guns were having trouble making headway so we decided it was best to backtrack and check other options. This involved more backing up and manoeuvering and hand signaling other motorists to give us some space but it did not require me getting a whole street full of vehicles to back up as happened back in San Cristobal. So I was happy.” 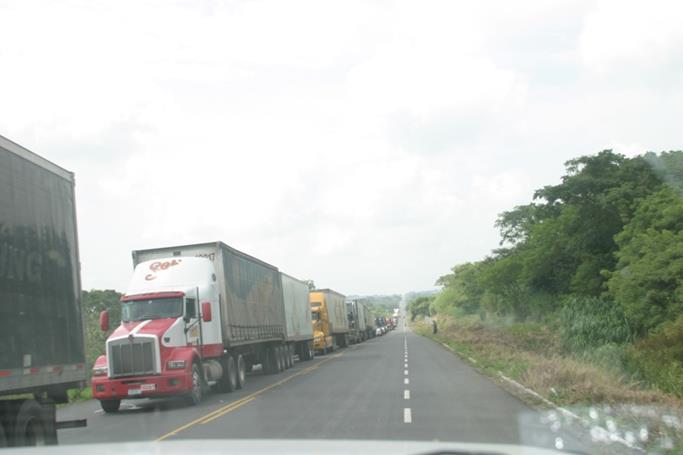 Our new friends in Aguilera. 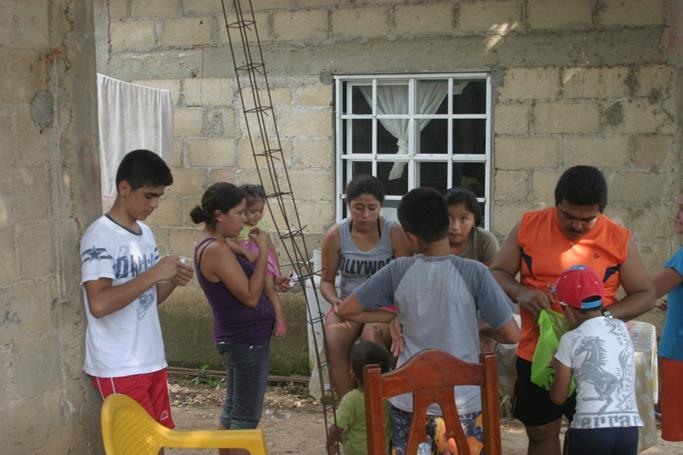 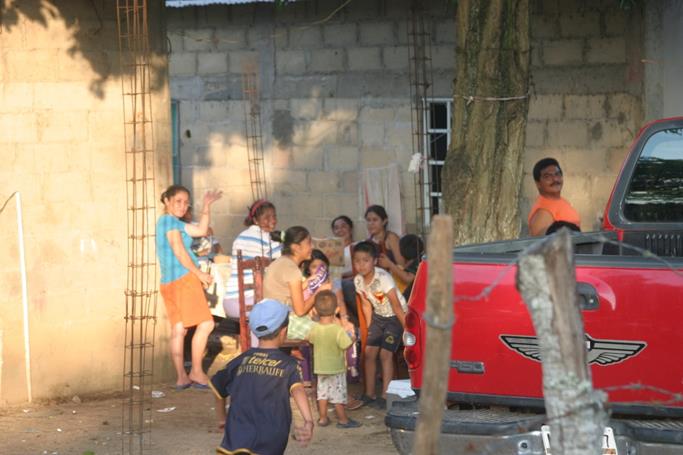 Some chicken shots especially for our granddaughter Melodie. 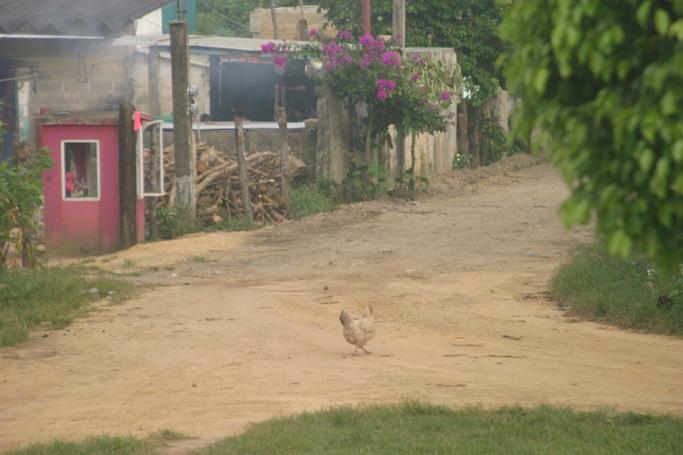 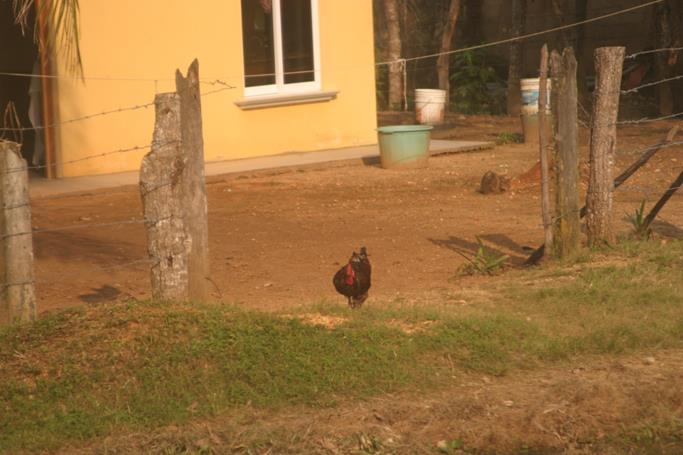 A chicken and a laundry shot all in one picture. Julie notes “Bonus, 2 of my obsessions together. This campground also offered a herd of wandering sheep, horses grazing right outside our window and duelling roosters in the morning.” 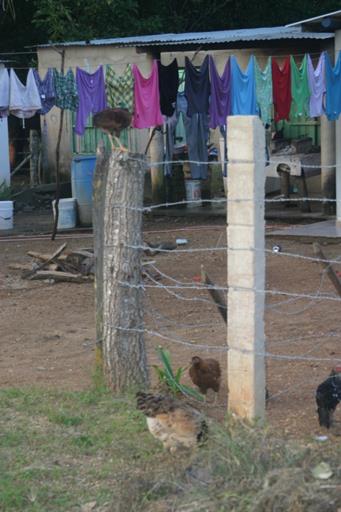 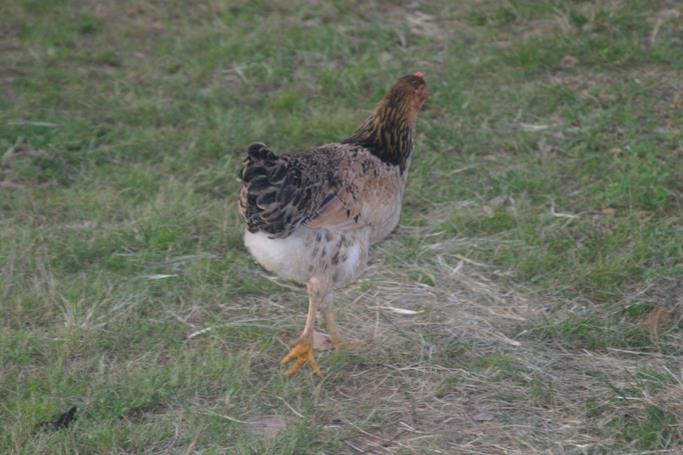 The family run BBQ joint with the pitmaster hard at work. 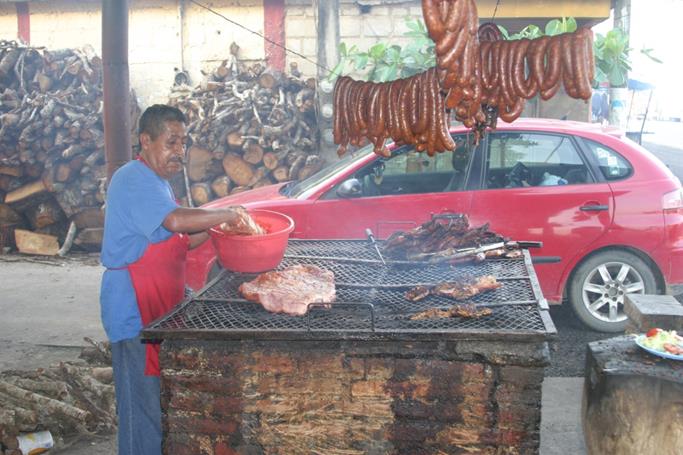 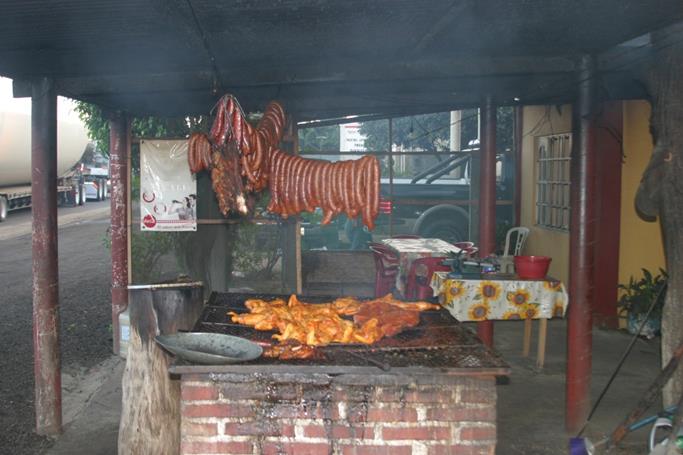 And here is the pitmaster and his “horno” oven (really – that is what it is called) from last night, in Tapanatepec, that Julie mentioned in yesterday’s post. 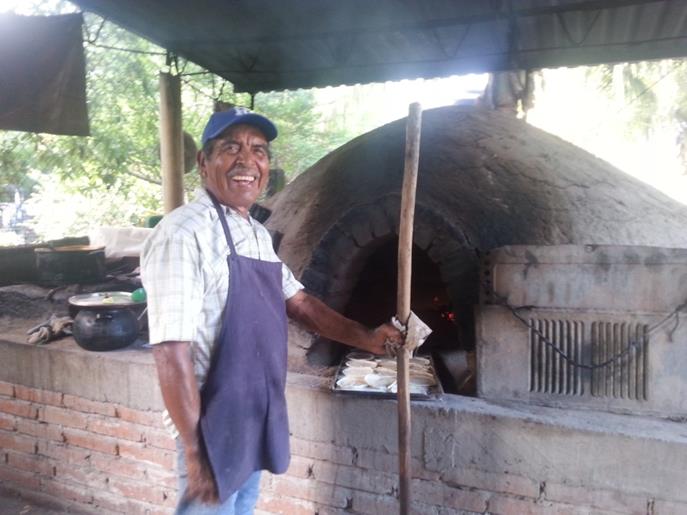 Our unplanned campsite for the night. We made friends later in the afternoon and evening with all the local kids and some adults who come to this park to play soccer, run around, and just have fun. We gave away the last of our candy supply as we visited with all the kids. Julie notes “Love the colourful tire border on playground. As often happens when there is lots of playing, the fun ends when the crying starts. 2 little boys, hot and tired and one ball.” 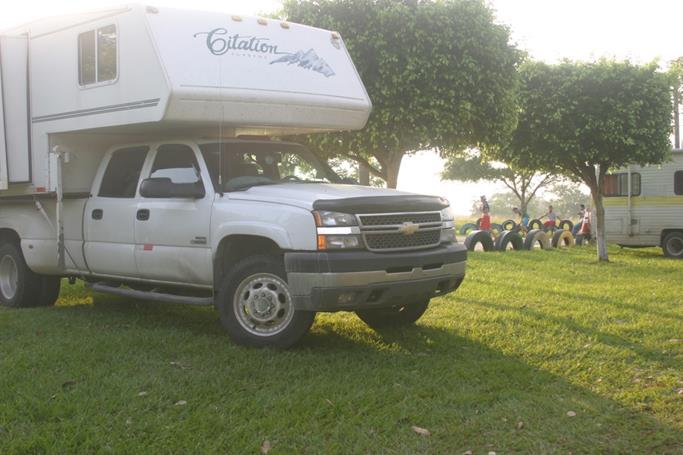 Julie notes “I don’t think I have any Christina Aguilera on my iTunes but if you know a song, shout it out.”