We awoke this morning and departed the Victoria area around 8:00 AM after a little calmer discussion in the morning. Norm let us know how he has seen dead bodies and horror and we have not and therefore somehow our safety was his utmost concern. Hopefully, only one more day with this guy. Julie notes “He told us ‘Even if he doesn’t like us and Brad isn’t a gentleman in his books, he is still going to look out for us’ (like we’ve paid him to). What a saint.”

With that ugly episode behind us and the hopes of being in or near the US today, we were on our way. We travelled from Victoria through Monterey and on to Nuevo Laredo and finally crossed the border into Laredo, TX. Julie notes “I still can’t believe it myself!”

The school was just getting ready to open when we were departing the Victoria area. Julie notes “Well today seemed to be ‘more casual Tuesday’ after the ‘full uniform Monday’ so no shots of the beautiful plaid outfits that the girls were wearing yesterday. A few of the boys in this shot are wearing the red shirts and beige pants or shorts. Up the street behind our camper was a kindergarten on one side and a high school on the other side. Different uniforms for each of those as well. Definitely an easy way to know who was supposed to be where. After travelling and seeing so many kids working when it appeared to be school hours for others I was happy to see all these kids eagerly waiting to get into their school grounds.” 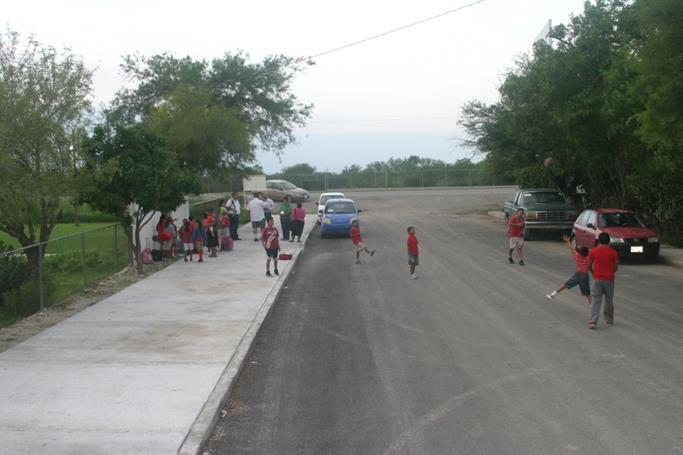 We were greeted with a beautiful sunrise. 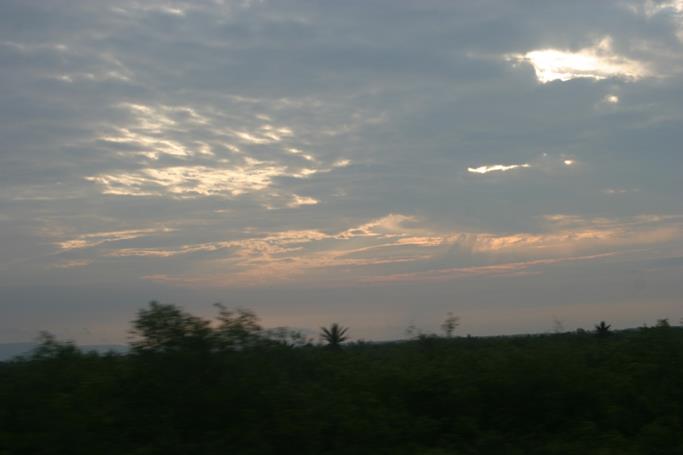 Twelve or more guys on their way to work. Julie notes “One of my other obsessions – Modes of human transport. Often hard to get a good snap when we’re rushing down the highway but these fellas (and gal who was the lucky passenger seat traveler this morning) were stopped getting a few snacks for the day. Two or three more fellas climbed into the back and off they went.” 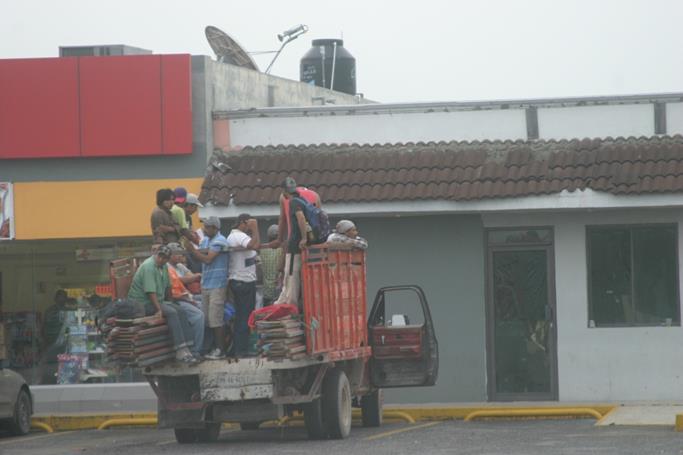 The Red Cross were moving supplies somewhere. We’re not really sure what, where, or why. Julie notes “Maybe our guide hired them in case we needed medical attention. He was very concerned about our safety, pointing out every police car that we encountered yesterday and today, in validation of his choice of routes. We had no problem with his choice of routes. It was well patrolled and the scenery amongst the South Sierra Madres was beautiful. Just quit stalling and get us to the border.” 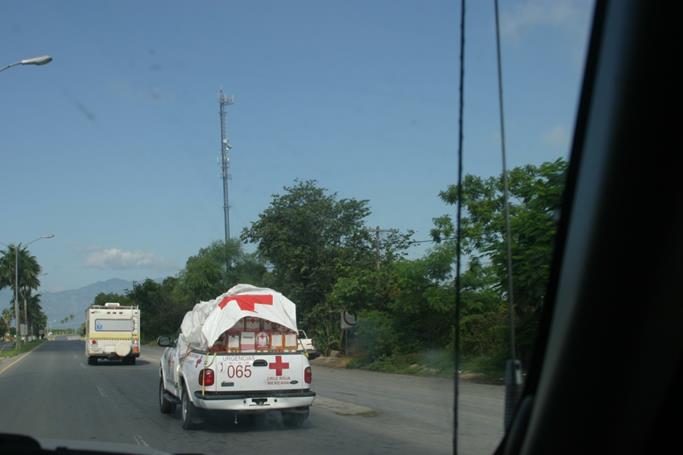 Some more scenery from northern Mexico. Julie notes “The scenery was beautiful but there were very few chances to get a shot without a power line in it. I think my photographer bother Corrie once told me though, on a trip up to Aylen Lake, ‘those things are part of the scenery too’ so I will try to live by that.” 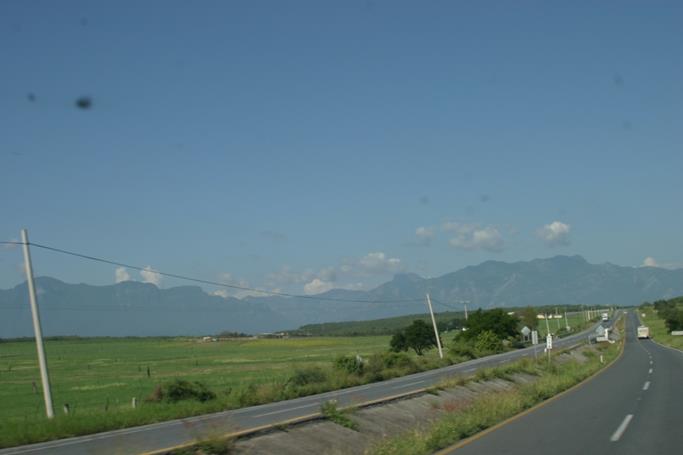 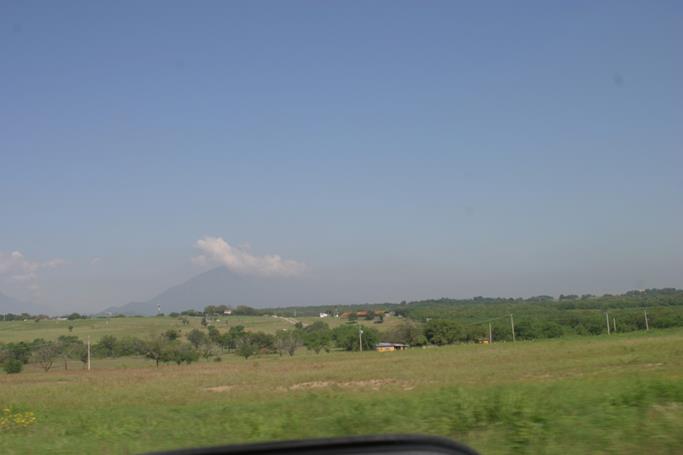 Our McDonalds lunch stop in Monterey. It appears to be a fairly large modern city with more influence from the US than what you see further south. Julie notes “Nice spot for a city, mountains everywhere you look. (Once you look past the McDonalds, Starbucks and iHop signs, I know Corrie ‘They are part of the scenery too!’ This new mantra is harder than I thought it would be.) Our camera battery died just as we were getting close to the famous Monterrey Saddle Mountain so you can imagine what that looks like or google it.” 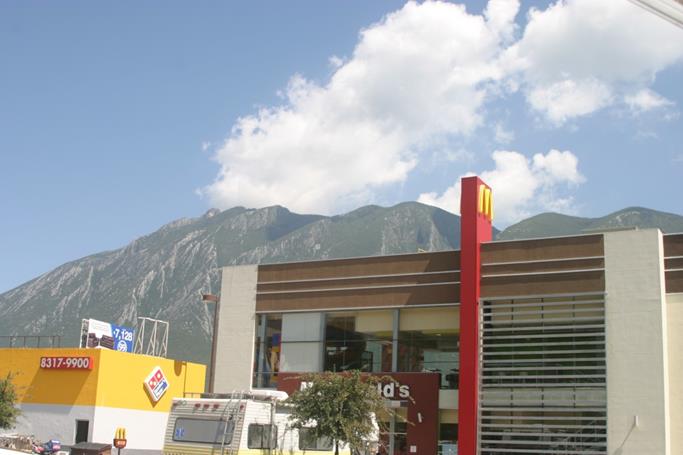 North of Monterey to the border is mostly desert. 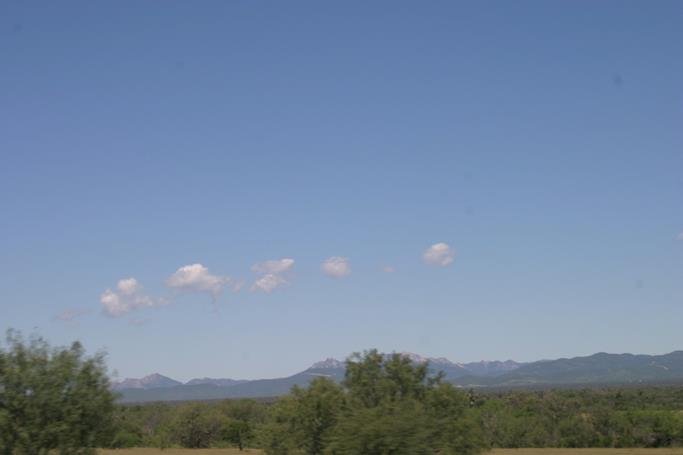 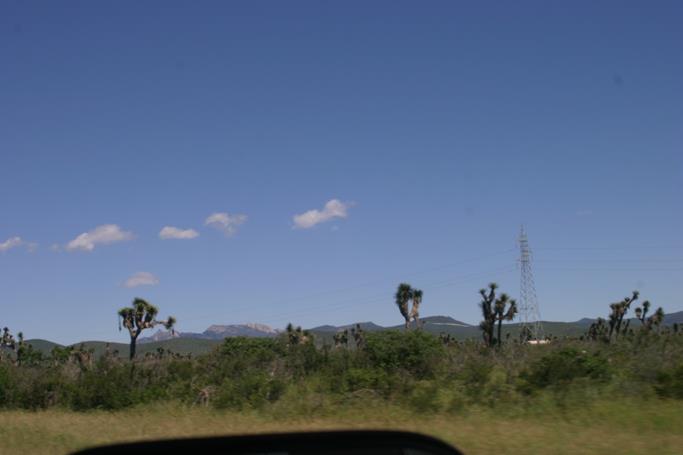 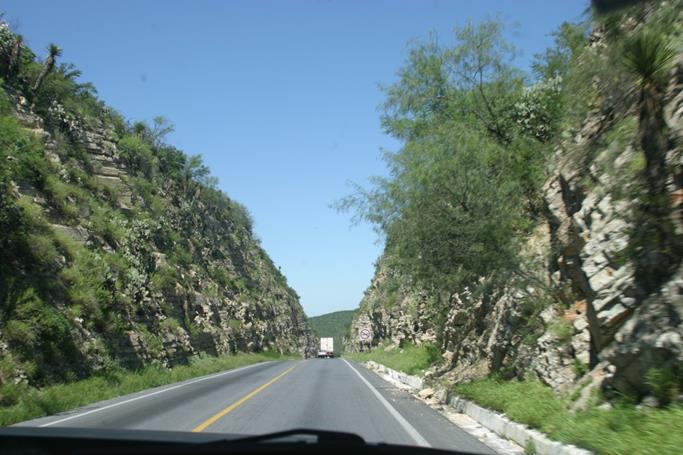 We can see Laredo across the Rio Grande! 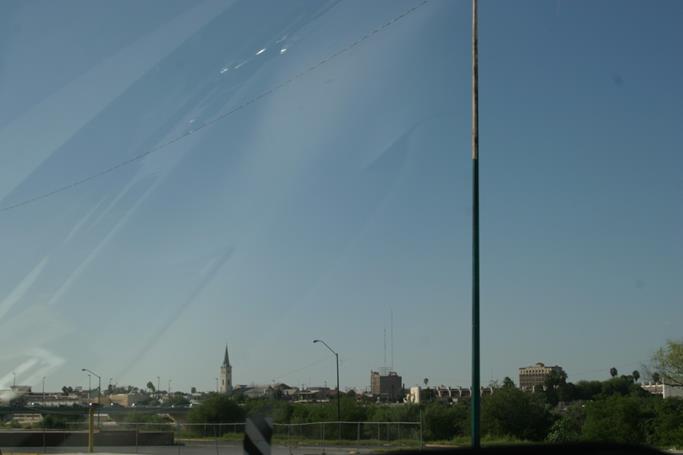 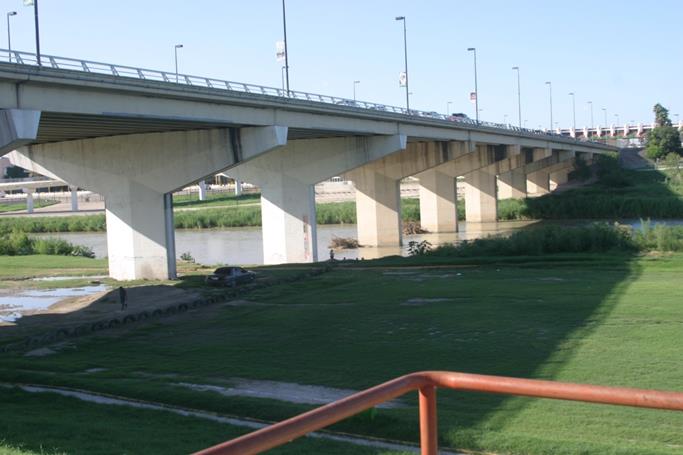 Are we going to have to swim or will we be able to out-smart our guide and get him to cross the border? We indicated that we were OK staying on the Mexico side for the night and then it was his idea to cross into the US. YES! Julie notes “Yes a mix of reverse psychology and several failed attempts to find a parking lot that would let us stay Mexico side for the night. Norm comes up with this great idea that since it is only 4 in the afternoon, let’s cross over into the states. He is a genius! As it turns out his US car insurance doesn’t come into effect until tomorrow so that is possibly why he was trying to hold us hostage one more day in Mexico.”

Approaching the US border Julie notes “Get ready to see the end of ‘the end’ of this motorhome in front of us.” 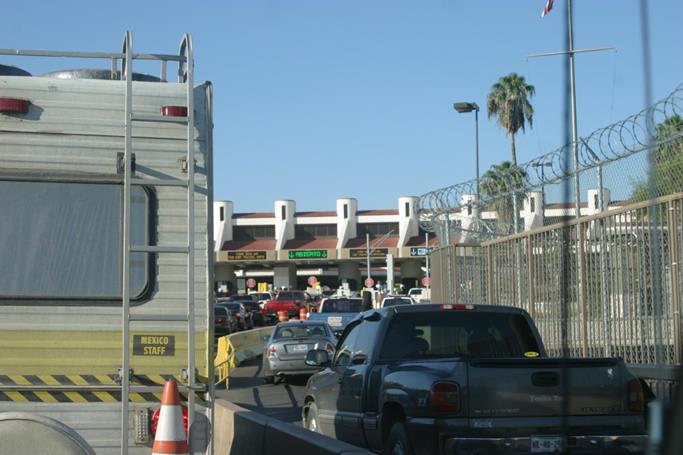 …and then a complete scan and we were cleared to enter the US of A. Julie notes “I had to disembark as Brad drove through the scanner. I was not allowed to take pictures of the process but again using your imagination, as Brad passes the truck through the machine you could see the whole truck glowing bright orange and then green with puffs of smoke and then I could actually see Brad’s skeletal outline and all his fillings. Well actually I looked the other way so that they couldn’t scan my brainwaves and know what I was thinking so I am not really sure what the whole process looked like. But I bet that that was fairly accurate. I hope it didn’t zap Brad too badly. Emily is still hoping for a little baby sibling. I would need the help of those many Virgin Mary shrines we’ve passed by with perhaps a Mayan fertility idol thrown in for good measure.” 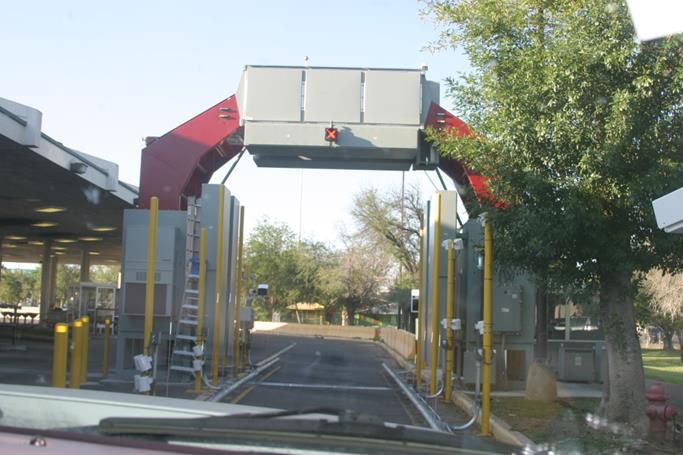 Our guide invited us to join him at a buffet place and we accepted. We thanked him for getting us back to the US safely which he did. We then found the Walmart parking lot for the night. Julie notes “Well we again followed Norm’s lead and parked beside him for the LAST time! We got all comfy and set up and relaxed and security comes and asks us to move. So yes I know what you are all saying, ‘Have they not learned anything in these past 2 months? Why are we still listening to Norm?’ I think we might need some deprogramming.” 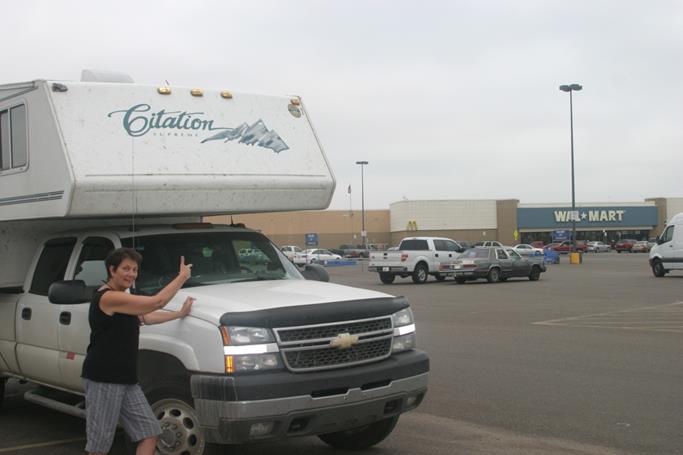 Julie kisses the ground showing her thankfulness for being north of the border. Julie notes “It was a symbolic gesture. My lips never touched the asphalt. It was very yucky. And I mean no disrespect to the countries we travelled through. Most of our relief is from finally completing our contract with a certain person and not having that hanging over us anymore. It has caused us much anxiety and many sleepless nights. The other relief is that Brad can finally find a place to order a large coffee and quit whining (a relief to me).” 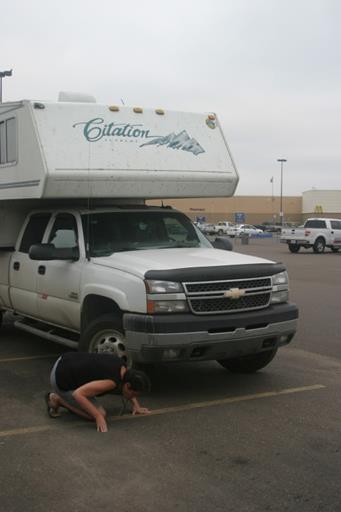 …over and out, the happy muleskinner and his happy sidekick

Julie notes “Trying to sum up how I feel about our whirlwind journey through Mexico and Central America is hard. I have regrets about what I didn’t do to prepare and how things panned out for us but have no regrets about going on this adventure. We have seen spectacular things, learned from amazing historical sites and fabulous cultural experiences, met wonderful people, laughed with families and gasped at the some of the living conditions we saw, driving past, unable to help the situation even if we stopped. Many smiling faces waved at us as we went past but for every one of those there were the tired and hot people, trying to go about their daily lives, as we roared past them in our air conditioned unit. I don’t blame them at all for not jumping up and down with joy when they saw us coming. From what we saw the people work hard. Everything from getting water to getting wood for the cooking fire to working the fields to getting around in a big city is hard. They love their children and walk or ride or drive them to and from school, holding their hands with their other babes in arms, no fancy strollers. The children often work as well, carrying the empty water jugs, loads of wood, smaller siblings or wares for sale. I have come down with what I think must be photographer’s remorse. Not sure there really is such a thing but I felt it in the pictures that ‘I just missed’ and some that I did take that I felt may have made the subject feel uncomfortable. What we saw was interesting and different to us but we tried not to make people feel like an oddity but there were a couple times that I wished I’d kept my big camera nose to myself. And of course again I must say that I had the princess role in this journey. Brad sweated, lugged, worried, drove both frontwards and backwards and sometimes sideways and managed to get us out of whatever jam we encountered. I can’t thank him enough for that. (Don’t tell him that though as I plan to hold this misadventure over his head for years to come.) We seem to attract misadventures so please stay tuned to our blog as we try to decide ‘what happens in the afterNorm’.”