Our little unnamed thermometer man said it had dropped to -4C overnight. That explains why I needed to get up in the night and turn on the furnace. Julie notes “Well that explains ‘one’ of the times you got up.” That kept it toasty in our little nest. It was a bright clear cold morning when the sun did rise above the mountains. Two mule deer spooked when I opened the door to head over to the shower house. Julie notes “Can’t say that I blame them. Being downwind of a guy heading for a much needed shower.” We spent a leisurely morning with coffee and our egg, ham, cheese (for me), bagels from our “Back to Basics” all in one toaster/poacher. They turn out really well every time and are delicious.

We headed over to the store to get some free WiFi and upload a few late blog posts. The old guy that runs the place is pretty grumpy. His wife is much nicer and should be the only one to deal with customers but unfortunately that is not the way it goes. A large group of older motorcycle tourists had the same impression, so it wasn’t just us. Julie notes “I think he would even be ejected from Brad’s Grumpy Old Man club and is way too miserable to dine at Cranky Franks. I was tempted to take back what we had purchased the day before but as you’ll see below I would have had to commit a felony and break into a US mailbox to do that. Although the prisons in the US may be a little nicer than in the other countries we’ve visited I decided not to risk it.”

It was then on to the Gila Cliff Dwellings after a stop at the visitor centre. It is another amazing site and we are so glad the National Parks and Monuments are open again. Julie notes “There was a museum and gift shop here but I rushed ahead and read some of the museum exhibits while Brad waited to talk to the park attendant. That way hopefully we wouldn’t be remembering the Alamo hullabaloo. But don’t get me wrong, we still remember the Alamo. My plan worked. A tension free museum visit accomplished. There was also a short video which was very informative and we now know the correct pronunciation of Gila (Heela) as in Gila Monster. That will not likely stop us from mispronouncing it in the future though. I wish I’d bought my postcards and such from the park gift shop instead of the grumpy store. The old fellow working the park office was very nice and helpful.” The trail is about a mile long and takes you into an area where you can view the 7 different cliff dwellings that housed 40 to 60 people. It was abandoned around 1300. We met a great couple who gave us some ideas of what else we could see and do in New Mexico. They had retired from Ohio to a suburb of Albuquerque. We keep meeting some great folks on our travels. Julie notes “It’s amazing what people get talking about as we’re all teetering on our tiptoes trying not tumble off the cliff peering into the inaccessible cave hoping to glimpse the wall painting that the guide insists is there. We bonded over the discovery.”

We headed out about 3:00 PM to find a new campsite. We stopped in at a little motel, restaurant, cabins, pub place. I needed to stock up on some more beer. They only sold a small batch locally brewed beer in a jug. I picked up a jug of their amber ale to try. We then headed off on a different highway (Hwy 35) back towards Silver City, NM. We found the Mesa Forestry Service Campground and pulled in for the night. Julie notes “This was a nice surprise as our maps show this campground on the other highway. Too bad for all the suckers driving the other route. This is a very nice campground. Maybe if I complain to the map book people about that one misplaced tent symbol we’ll get our money back?”

After another walk down to Lake Roberts, which turned into another 2 mile hike, Julie notes “Okay maybe there wasn’t a short cut trail, just around that next corner, back to the campground. My bad. But we were really hungry for supper by the time my ‘short cut’ wound its way back to the camper. Plus on a positive note I didn’t lead him onto another trail called Purgatory Chasm. Yikes! He’d wised up by then and locked in to his GPS brain bank.” We grilled up some angus burgers, with sautéed mushrooms and onions, for supper along with a salad. Delicious!

Julie had some more postcards to mail from the Grumpy guy’s place (the post office box was pretty cool though). Julie notes “Taken before I realized the extent of his grumpiness or I would’ve shoved them up his other mail slot.” 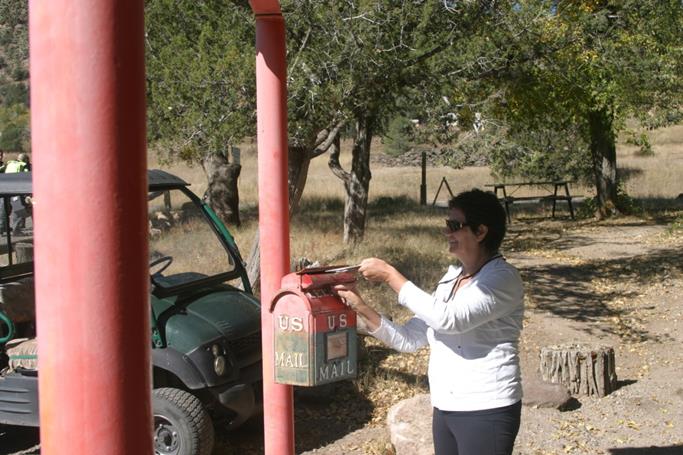 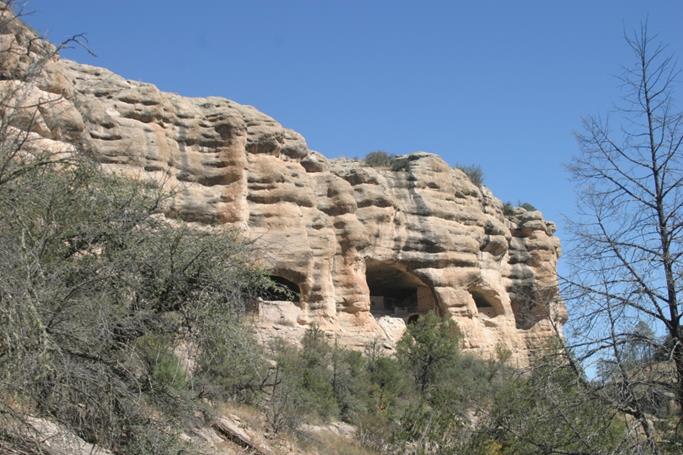 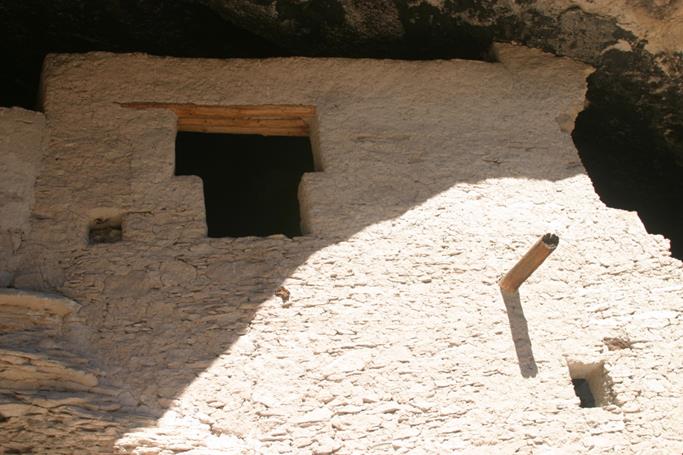 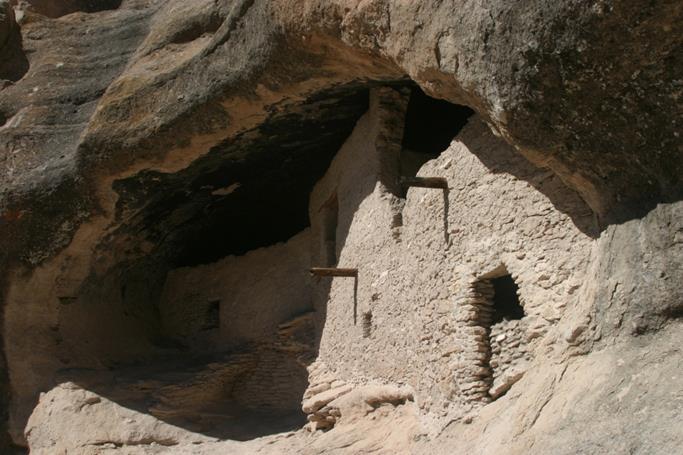 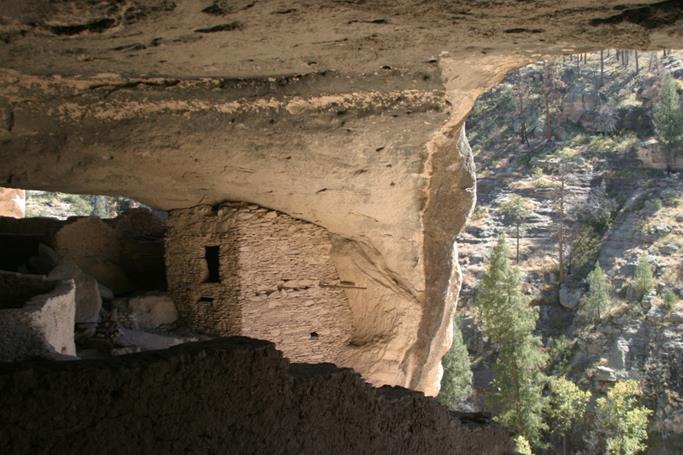 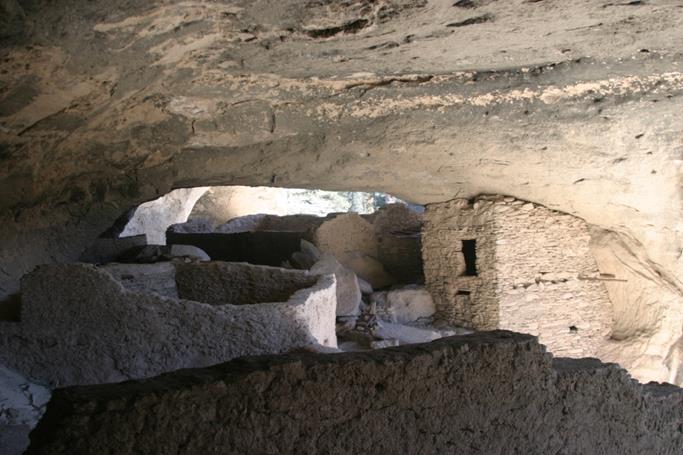 After touring the major cliff dwelling site, we headed to a nearby petroglyph site and a small cliff dwelling. Julie notes “You kids out there, this does not give you permission to scribble on your walls. Us humans have enjoyed graffiti for a long, long time though.” 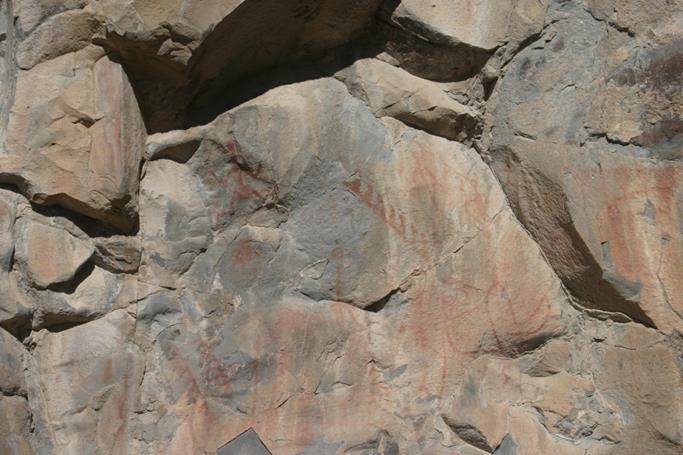 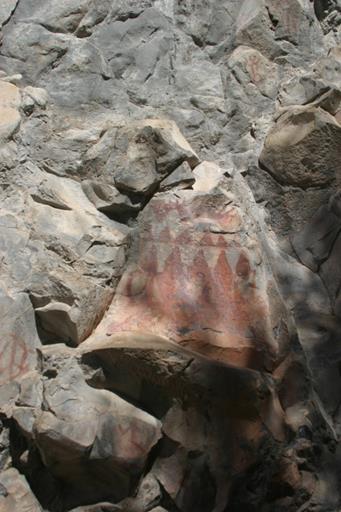 Julie notes “Welcome to my humble dwelling. Watch your head. May I offer you some prickly pear tea and squash soup? (Sorry Susan, but that’s what they grew around here. You can see little squash ripening here and there in the ditches. Should I bring you some home?)” 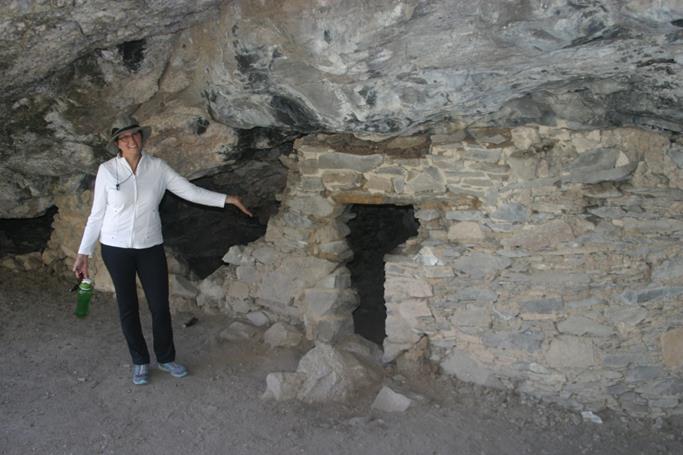 My jug of Little Toad Creek amber ale brew. Julie notes “‘We thought you was a toad’ is what he will be saying after he drinks all of that! And if you look closely there is a green toad on the bottom of picture, on the staircase.” 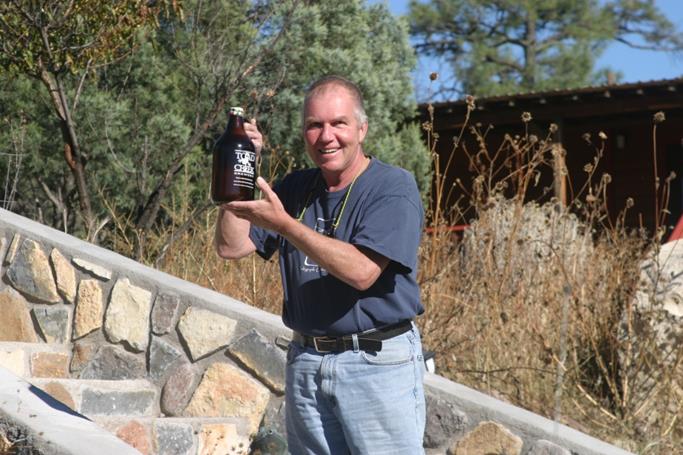 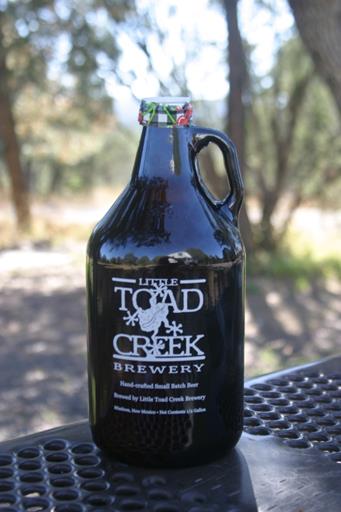