We awoke to cold temperatures again this morning in the Mesa Campground on Lake Roberts in the Gila National Forest. It had dropped to a low of -7C overnight according to “thermometer man”. Winner of the name contest to be announced soon. Thanks for all the great suggestions. It makes it tough to pick just one name. “Julie notes “Keep the ideas coming. That way we will have a choice depending on what kind of weather he is telling us about or perhaps a ‘choice’ name if he is telling us bad news.”

Our campsite in the Mesa Campground. 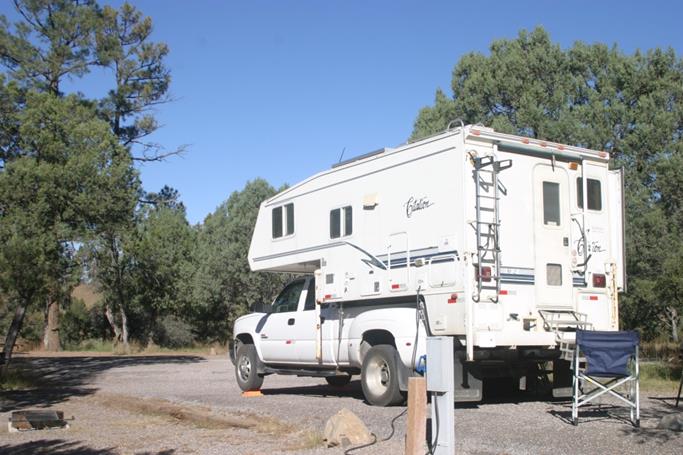 If you think we have just been driving in circles the last few days, you might be right according to this GPS track. This proves we don’t know where we’re going. Julie notes “I think Blue Rodeo was correct the other day when they sang ‘Ain’t it clear now? We are lost together’.”

Today, we drove south on 35 from the Mesa Campground, west on 180 through Silver City, turned north on 12, and north again on 32, east on 60 for a few kilometers, then north again on 36, turned east onto 117, and finally west on I-40 to Grants, NM. Try and follow that in you map books. Julie notes “It’s not just the heights around here that are making me dizzy! A female artist, who I can’t remember the name of at the moment, was singing, as we were clinging to edges of the roads ‘I save grace, for the roads that I travel on.’ That was pretty accurate as well as there was the occasional praying going on.” 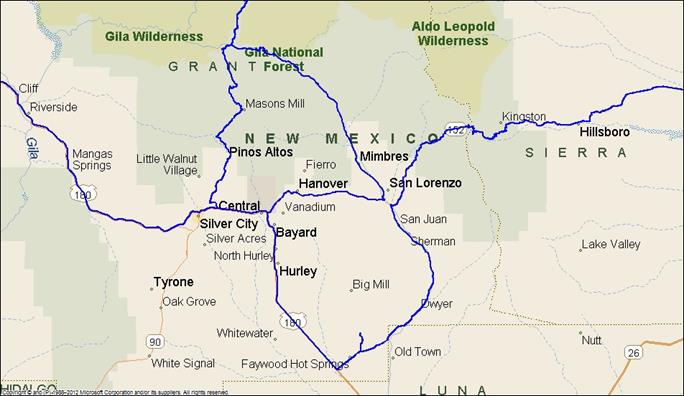 Scenery along some of the many highways. 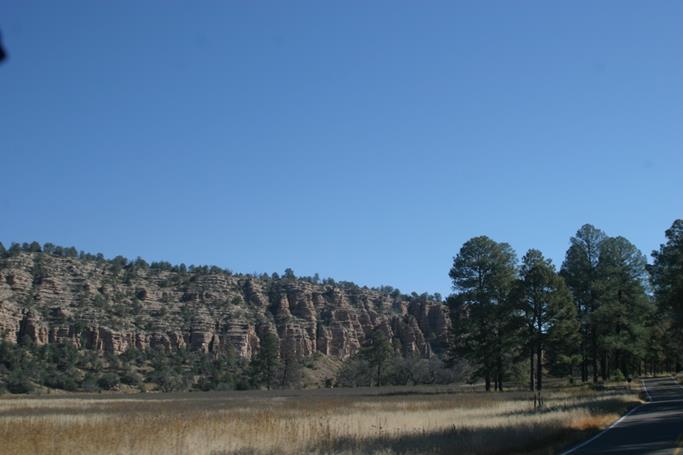 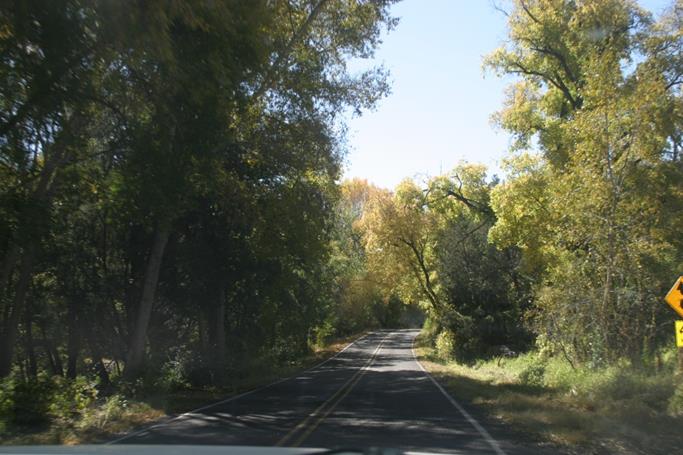 Julie took 124 pictures today. The majority of them were of distant windmills in various states of repair. These were all taken at 90+ km/hr. Julie notes “There would’ve been more but the camera apparently sets a limit as to how many shots of the same thing I can take and then it gets ornery, pretending it is trying to focus or something, leaving my perfect picture in the dust, or as that much recorded song and the title of this post infers, leaving them as ‘the windmills of my mind’.”

The first one compares my nose to the windmill to see which is bigger. Julie notes “It’s good to have something to use for scale. So, big nose or small windmill? I will let you decide.” 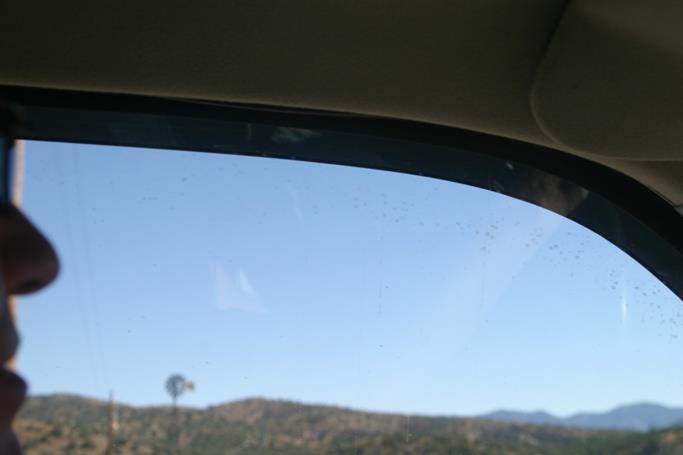 A few samples of the money shots. 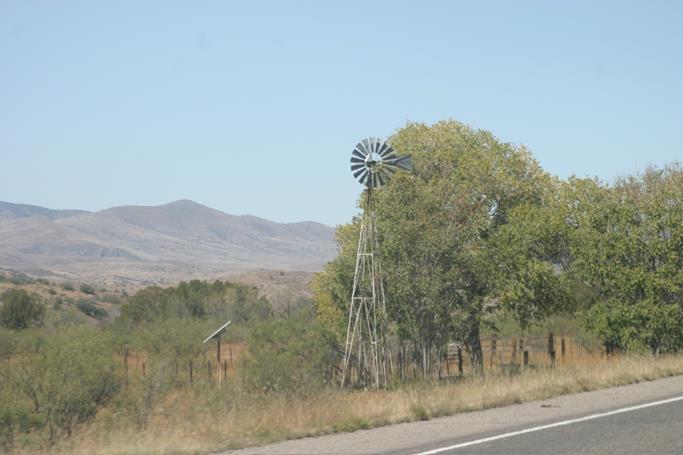 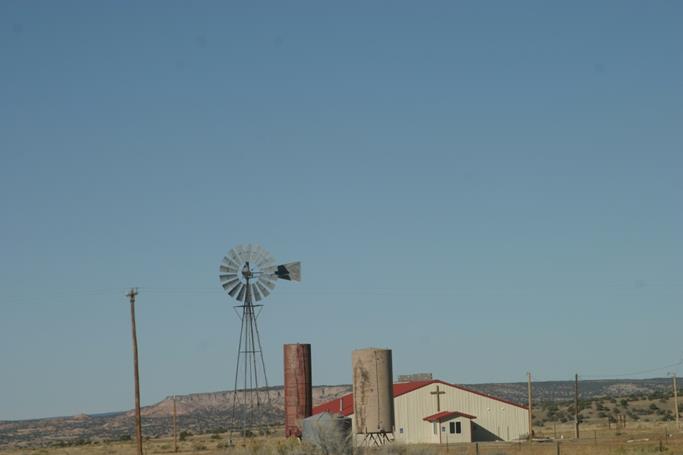 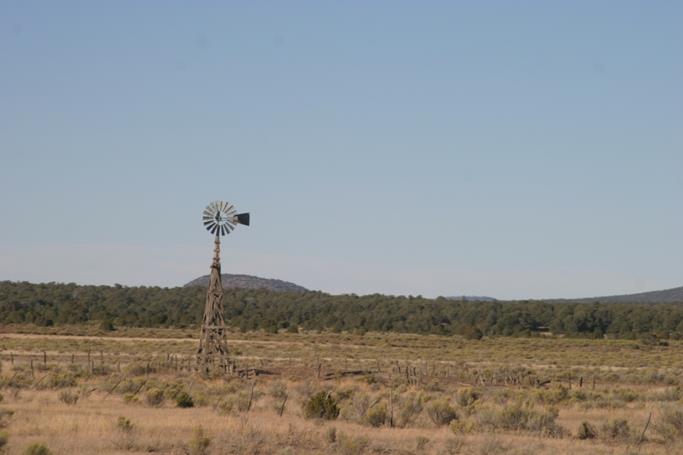 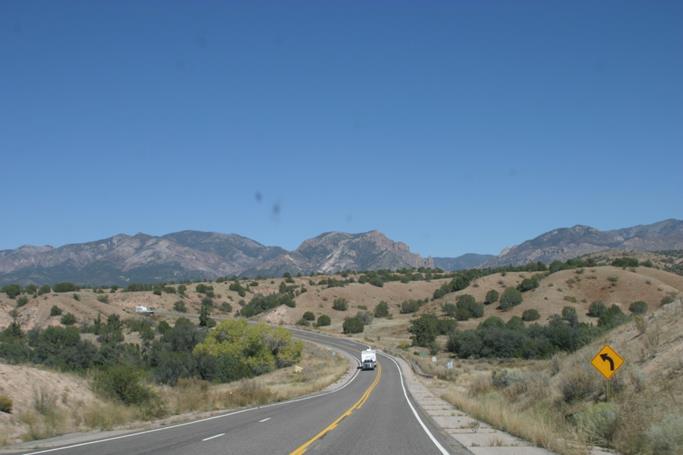 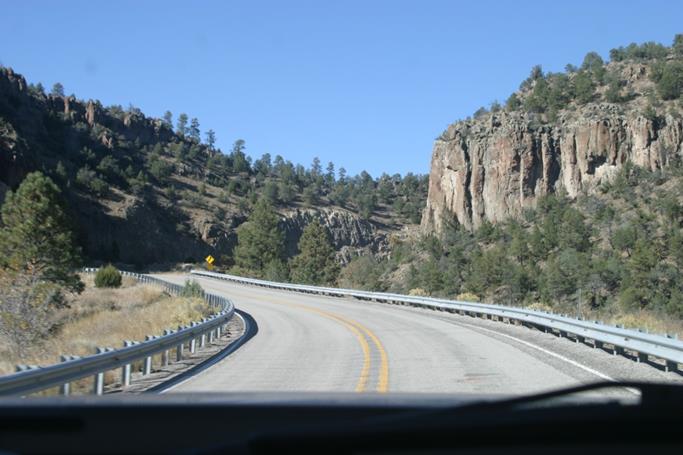 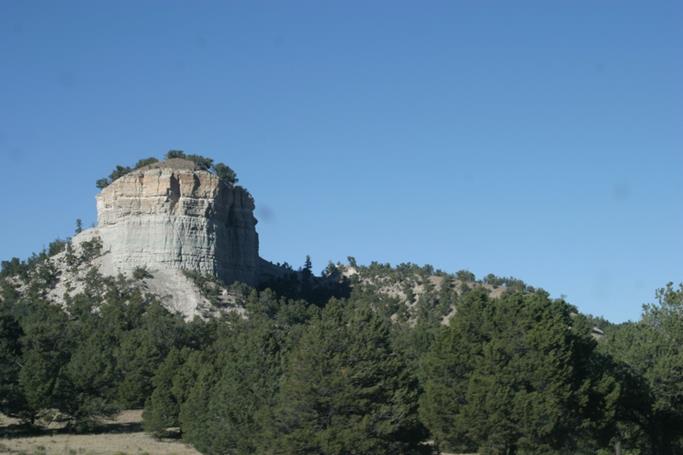 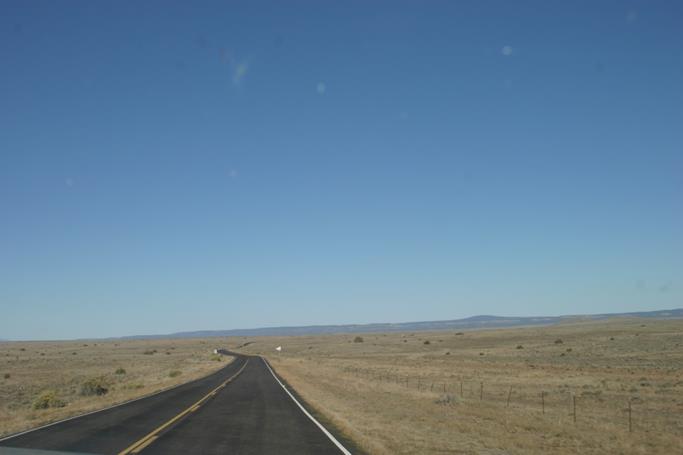 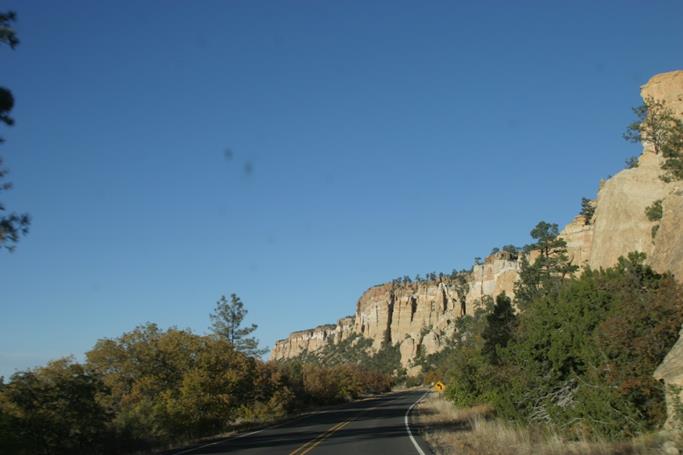 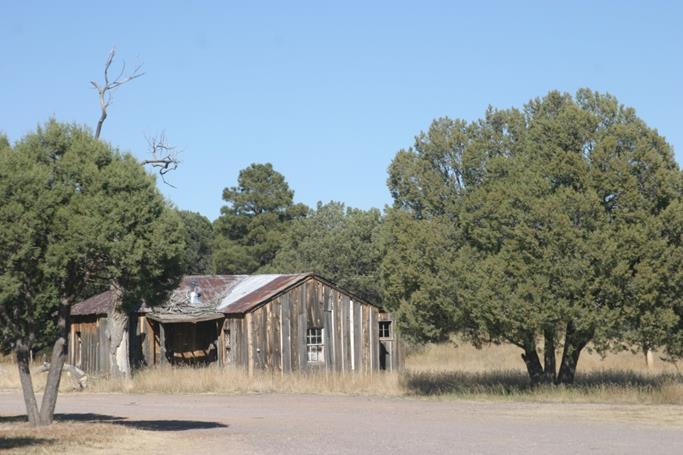 I know you’ve all be missing the laundry shots. Here’s your fix. Julie notes “Couldn’t stop myself even though they were just beige sheets, etc. I still have a touch of the clothes line fever.” 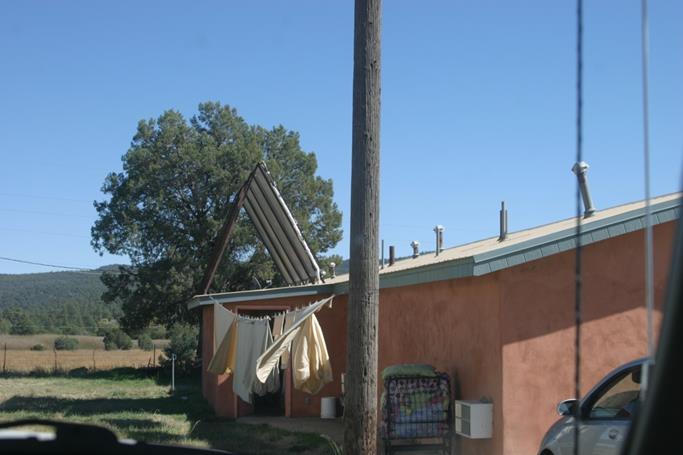 We stopped near Reserve, NM at the Adobe Café & Bakery for a late lunch. They serve huge plates of homemade food. I had the brisket sandwich special and Julie ordered the beef rib plate special. It was very good but a lot of food. It was served with homemade coleslaw, buns, and beans. We were not hungry for the rest of the day and just had a small supper of leftovers when we arrived at our campsite in Grant. Julie notes “Burp! I want this coleslaw recipe. No need tonight for the propane furnace as we both had beans and cabbage and fried onions. Watch the news for an incident of spontaneous combustion in Grant, New Mexico.” 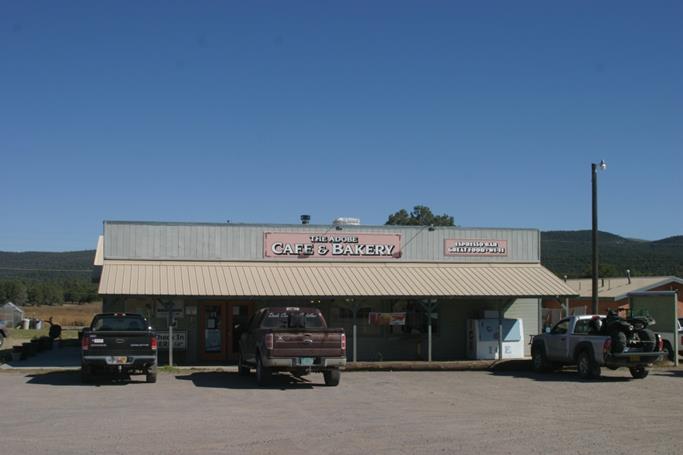 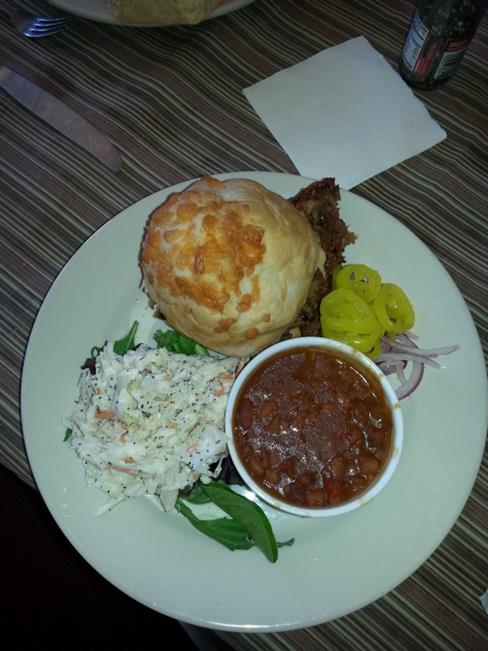 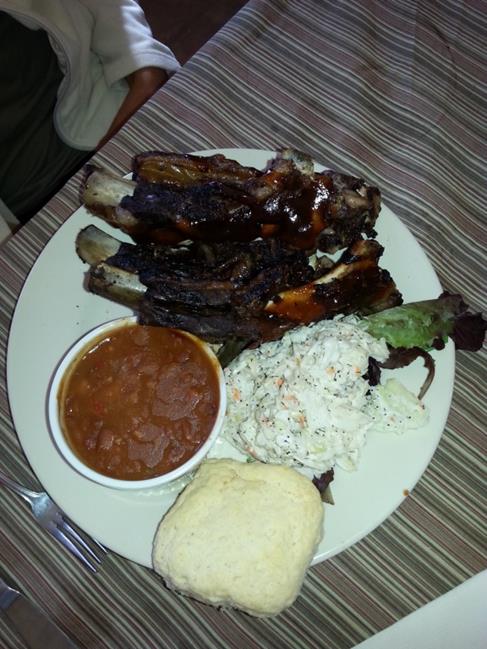 Julie notes “Today would be my Grandma Jean’s 109th birthday. She has been gone about a year and a half now but we feel her presence often. I know she would’ve been saying ‘Goodness Gracious!’ today as we wound our way through some more amazing country on this beautiful fall day. Krista’s recording of ‘Wind beneath my wings’ started off Grandma’s birthday perfectly because she was that to us all.”

“Quiz time ‘There is only one place in the US where 4 states intersect. Where would that be? And do you think we’ll go there?” Alternate question for the non-geography buffs ‘What is the correct rice to salt ratio while travelling in hot and humid climates. This may be a trick question because we never did figure it out and now we are in very arid country where the salt runs freely and face and hand cream are once again required and applied generously. However this leads to Lesson #116 ‘Cardboard salt shakers will not withstand 85% plus humidity. You can dump a whole Uncle Ben’s box of rice in there and it just keeps soaking up the moisture. Get good sealing glass or plastic shakers or get used to spreading your salt solution with a knife.’ Now I need to put on more hand, foot and ear cream.”