We started the morning off with the complimentary RV Park breakfast. A nice touch. They serve a continental breakfast every morning between 8:00 and 10:00 AM like the hotels. Julie notes “They had one of those toasters where you put your item to be toasted on the track and off it goes and pops out the bottom. I put in 2 halves of an English muffin but only received one half out the bottom. The next guy pops in a bagel, our combined engineering thinking was that it would nudge out my muffin. Only half of his bagel surfaces. Now we can actually smell trouble brewing or rather toasting. He summons the kitchen staff and she comes over, gives the toaster a jiggle and voila. Gives us an eye roll and off she went as if she hadn’t saved breakfast, the most important meal of the day. The unsung hero! And it was really crunchy and delicious with butter and jelly in its crooks and crannies.”

We decided to walk down to the Camping World store located about a mile down the highway but on the opposite side of I-40. After walking the mile or so down the busy service road we realized we should not even attempt to cross the barbed wire fences, four lanes of high-speed traffic, and a median. We decided we didn’t want to end up as two little crosses on the side of the road. Back to the park we went. We packed up the camper and drove around to the store. Julie notes “Yes you are all thinking the same thing to yourselves, there is a lesson here. Lesson #120 ‘Before you head out on foot to parts unknown maybe check with the people who work here every day to see if you can get there from here, in one piece.’ And much to Brad’s chagrin, I was not wearing my barbed wire hopping outfit.”

Since we were out and about, we headed into Albuquerque to pick up some more groceries at the WalMart Supercentre. Julie got pedicure at one of the kiosks in the plaza and I hiked over to Home Depot to find a part I needed. Julie notes “Not the friendliest of staff and I felt a bit like Elaine in a certain Seinfeld episode as they were talking amongst themselves. But the pedicure was good and they were even able to tame my bush lady eyebrows and other facial fuzzies. Then they abandoned me for a long long time as my polish hardened under a light bench. Brad, thinking I’d gotten lost in the parking lot, or hand wandered back in Walmart land, came to check on me. I finally attracted the attention of one of the friendlier staff and she released me from my toe locks and gave me my shoes back. And I still tipped them. Crazy lady. But my toes look great and my eyebrows no longer scare small children.” We then went for lunch at Chili’s. We shared some buffalo wings, guacamole, and parmesan sweet potato fries with dipping sauce. Very good.

It was then off to the nearby Petroglyph National Monument to hike off some lunch. There are a few short but steep trails through the volcanic area filled with 400 to 700 year old petroglyphs. We spent an hour or so hiking through the various trails. It was quite warm this afternoon at about 26C. Julie notes “There was a marker on the trail amongst the boulders and petroglyphs stating the 5,280′ elevation so Brad and I fist pumped as new members of the Mile High club. I am wondering if some of the symbols we saw might have commemorated the same accomplishment by the Ancestral Puebloans.” Brad notes “I don’t think she understands the concept of the Mile High club.”

We can see it but we can’t get there. Although there is no traffic in this picture? Maybe we should have been dashing across the freeway instead of taking pictures? Julie notes “Remember I wasn’t wearing my barbed wire leaping suit. Plus I had to wait for the semis to pass so we could see the store in the picture.” 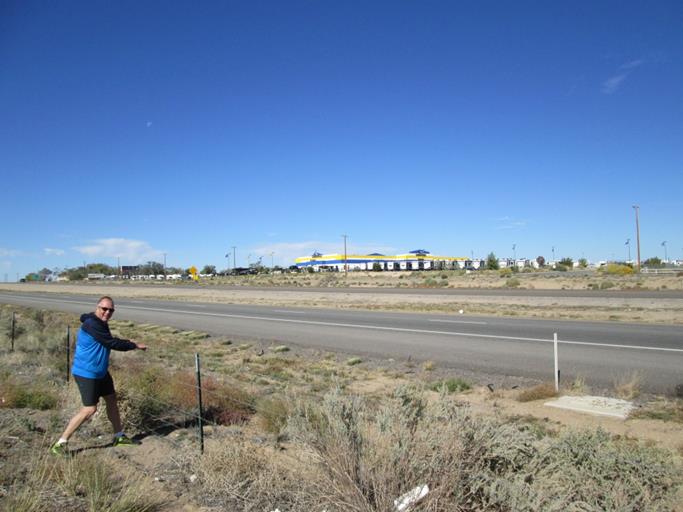 The long walk back to the American RV Park. Julie notes “No trucks on the service road in this picture either but there were many and all the drivers waving and wondering ‘WTF?(Walking The Freeway?) Where are those two yahoos going? Don’t they know Lesson 120?'” 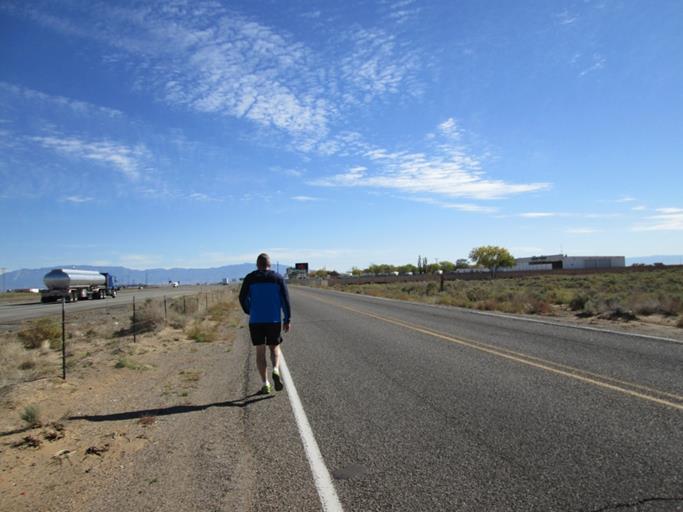 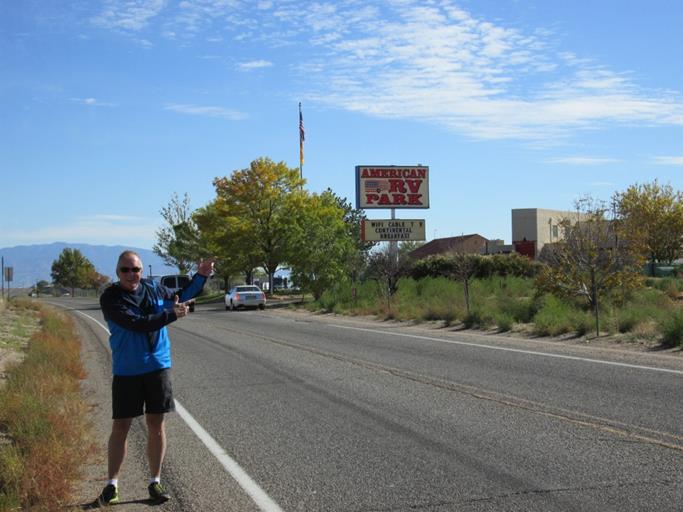 But eventually we made it to Camping World. One of my favourite stores. They have everything an RV’er could want but alas, Julie kept me in check. Julie notes “Well he fails to mention they DIDN’T have the only 3 things he had on his list.” 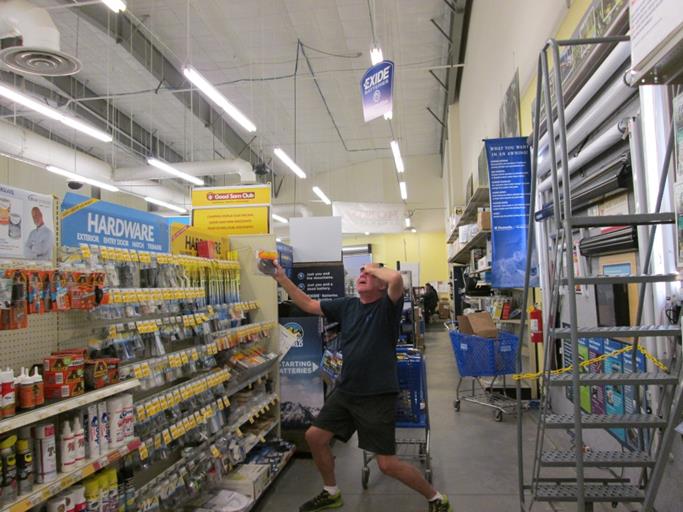 Where else do you find prickly pears in the grocery store? Julie notes “And someone has already plucked the prickles. They are as smooth as me now.” 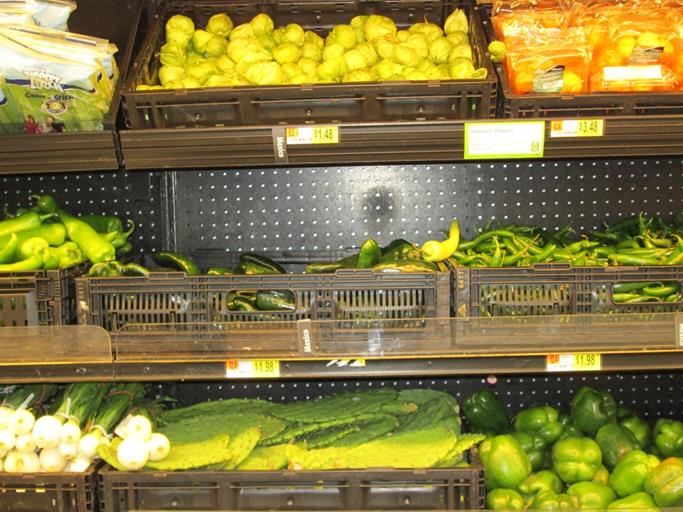 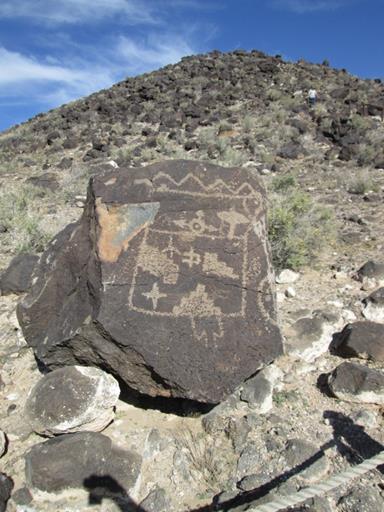 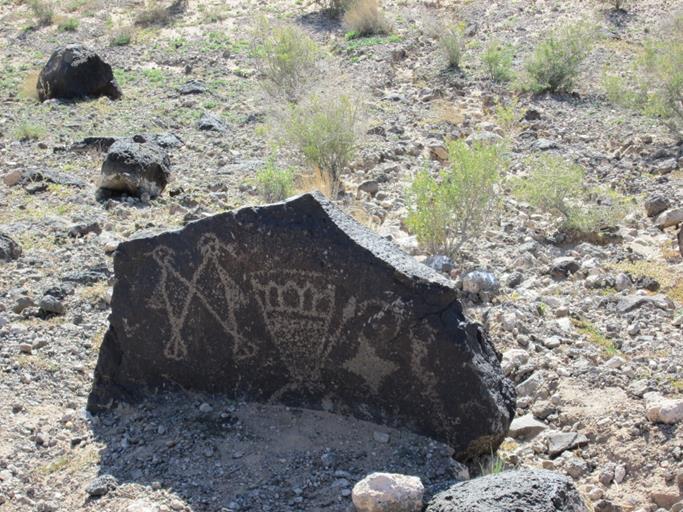 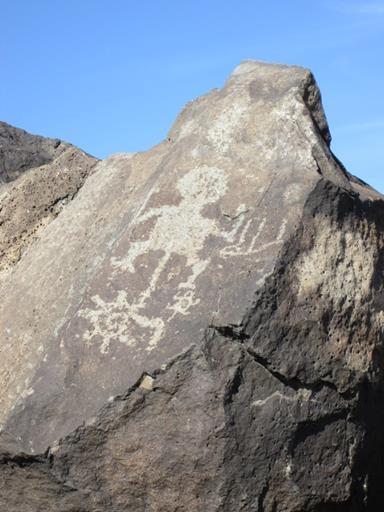 A view of Albuquerque. Julie notes “Trivia Question time ‘The city was named for a Duke but one letter was removed, to obviously make it easier to spell. Haha What letter was taken out?’ And if you want a chuckle go to Wikipedia for the history and painter’s impression of this Duke.” 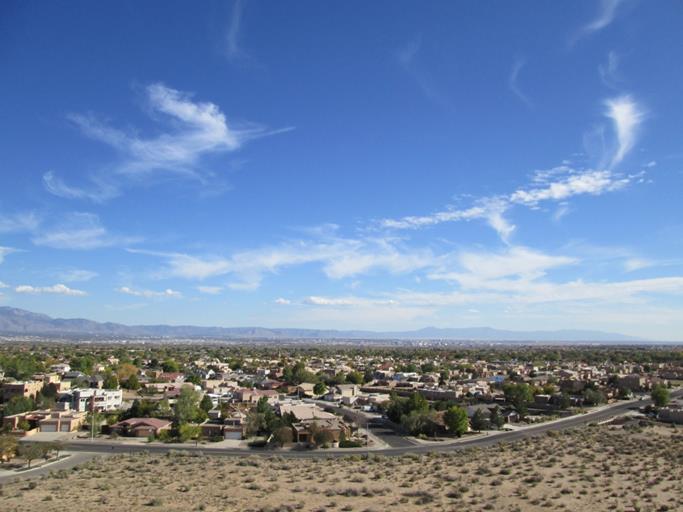 The sidekick trekking through the petroglyph lava fields. Julie notes “I think someone wasn’t reading all of the signs and got way ahead of me. Plus we needed a bit of air space between us after that good but gassy lunch.” 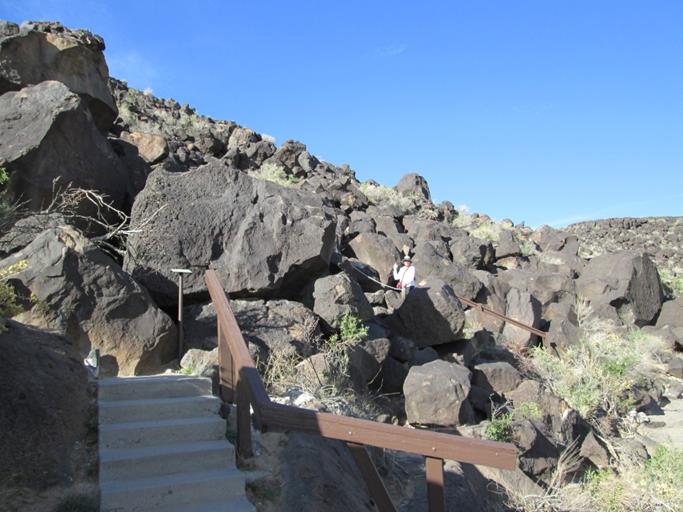 We headed back to our site, had showers, a soak in the hot tub, and BBQ’d up a nice sirloin tip roast, baked potatoes, and carrots. Julie notes “More like a ‘warm’ tub, than a hot one. Went back to the showers to rinse off and warm up. Supper was excellent.” After a late supper, it started to rain for the first time in weeks. Julie notes “Oh well I guess the Thermometer Man should be called ‘Smarty Pants’ since he’s been telling us for a week to get ready for rain. But now that it is raining he has a sun poking through cloud prediction. I don’t know.