Before leaving Ojo Caliente, Julie wanted to hike the 4 mile round trip to the Joseph Mica Mine. Julie notes “Now this was a bit of a hard sell. I couldn`t get him to go the `Mine Museum` while we were at Grants a few days ago and couldn`t figure out why. Turns out he thought it was a `Mime` Museum and that today I was taking him to see Joseph the Mica `Mime`. Some kind of childhood trauma involving mimes I would guess but we finally got it all sorted out and laughed about the misunderstanding.” The trail followed an old road that is now used by 4X4’s, dirt bikes, mountain bikes, and hikers. We only encountered other hikers on the trail today. We packed some water and a nice picnic lunch and headed to the mine. The trail begins to glitter with mica as you approach the mine. Julie notes “I am pretty sure this is where that old saying originated “All that glitters is not gold.” So who can tell us what mica was mined for? The woman who we met in the mine shaft thought it was used for window panes and then offered us the mine shaft to eat our lunch in. But I`m not sure if you can trust someone who is trying to give you the shaft. (Sorry, I needed to get that out of my system.) And according to the Ojo Caliente spa people, mica is the “not so secret” ingredient in their skin creams that makes you glow with youthfulness (and also allows them to up the price tag). We have not had much for wifi lately but a real need to know what they did with all of this shiny stuff.”

Here is Julie on the trail. This is only a few hundred metres from the campground so the smile is still quite big. Julie notes “It was one of those `am I hot? am I cold? sweater on? just unzipped? is he going to slow down any time soon? is this a race? did I drink too much coffee again? am I hot? am I cold?` kind of hikes. I think that is my `yes I did drink too much coffee` smile.” 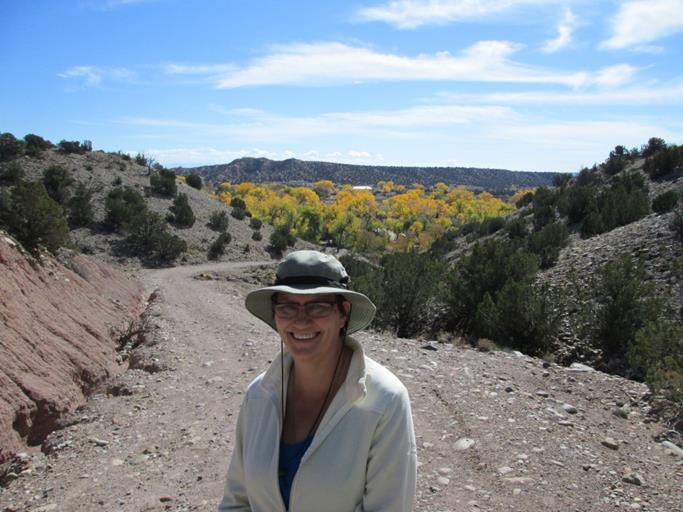 The three shafts at the mica mine. Julie notes “Insert theme song from ‘Shaft’ here.” 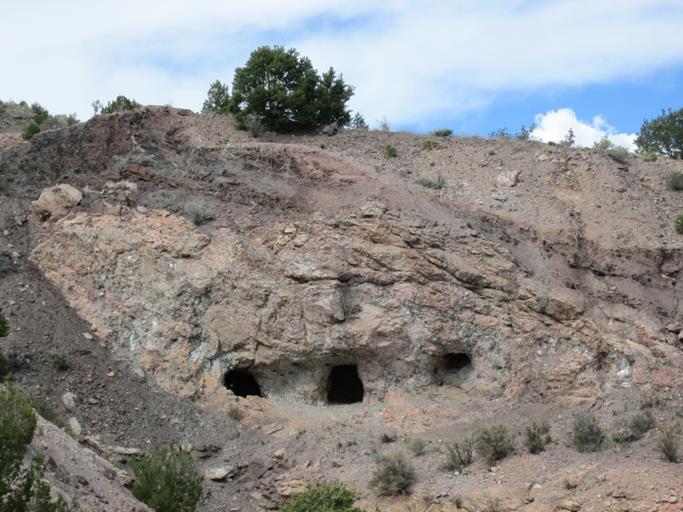 Inside the main shaft. A young family was also there having their lunch. There are still many sheets of glittering mica to be had for any energetic miners out there. Julie notes “Do you think that nice young family will give us the shaft? (Sorry again.) And if you are wondering about my outfit, my blue shirt matches my toenails and my hat matches my socks and hiking boots and well the rest is window dressing.” 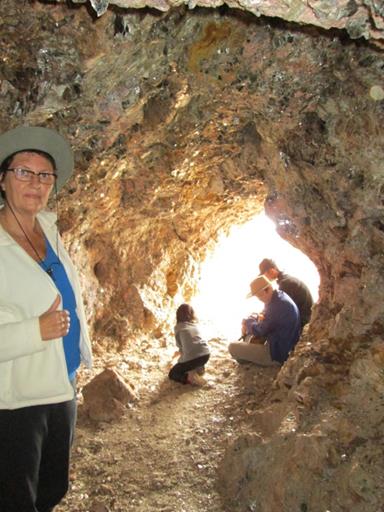 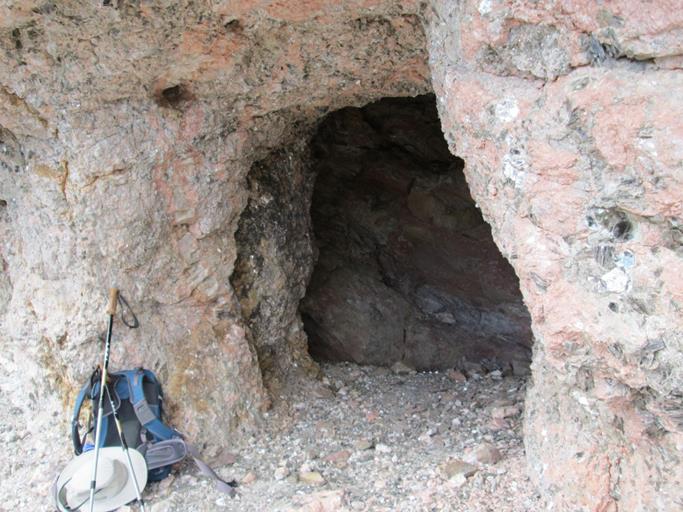 A couple of hard core hikers. Julie notes “Just ignore the people above still trying to give us the shaft. (Sorry last time, I promise.) 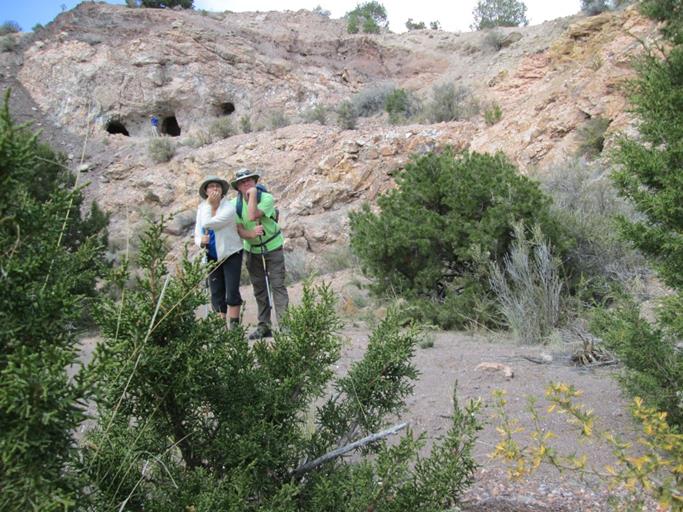 The distant mountains near Taos, NM are snow covered at the higher elevations. Julie notes “Yikes are we heading that way? We don`t have our skis or ski jackets for that matter.” 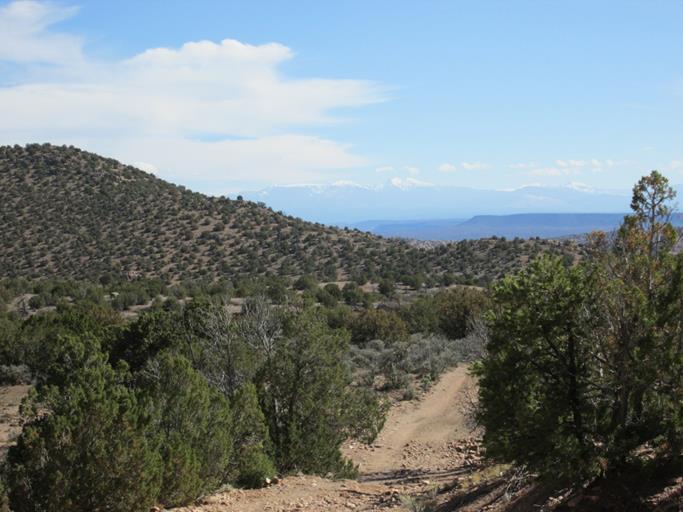 After our hike and picnic lunch, it was time to head to our destination. The Corp of Engineers Riana Campground on the Abiqui Reservoir was only 65 kilometres away. Unfortunately, when we arrived, the campground was closed for the season. There didn’t seem to be many other campgrounds in the area so we headed to Chaco Cultural National Historic Park, a UNESCO World Heritage site. 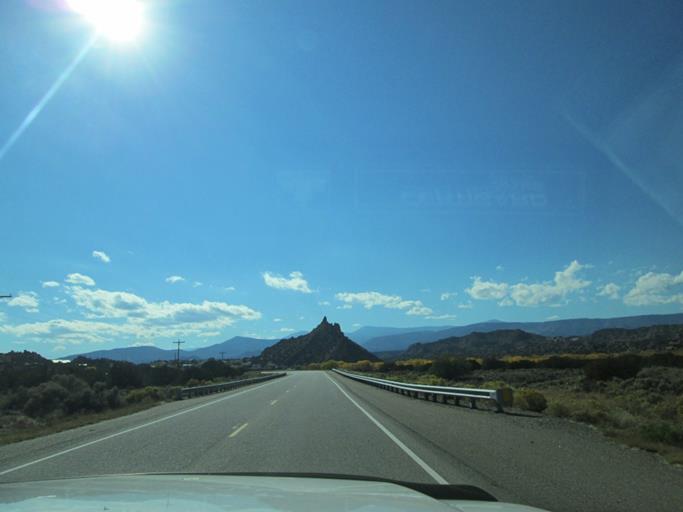 The Abiqui Reservoir near the closed campground. Julie notes “It sure looked purdy as we drove by.” 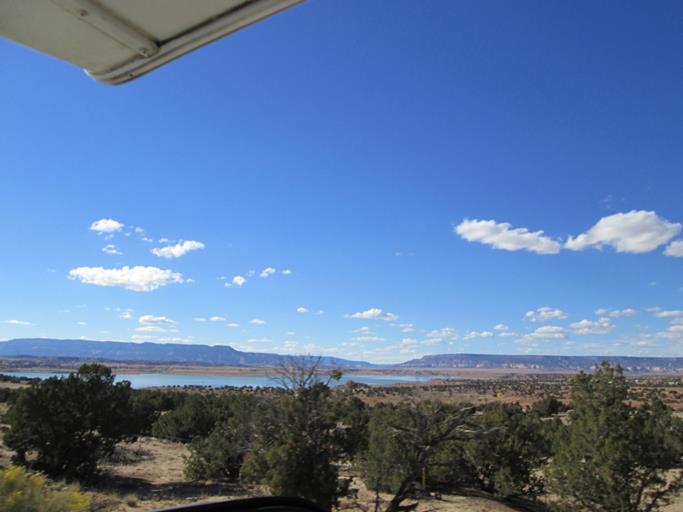 Of course, we passed some windmills. This one was on the road into Chaco. Julie notes “I`m always excited to see what he picks as the `money shot`. I like this one. Not so close as to see the graffiti on the tank next to it, and an impression of the flat lands and big skies.” 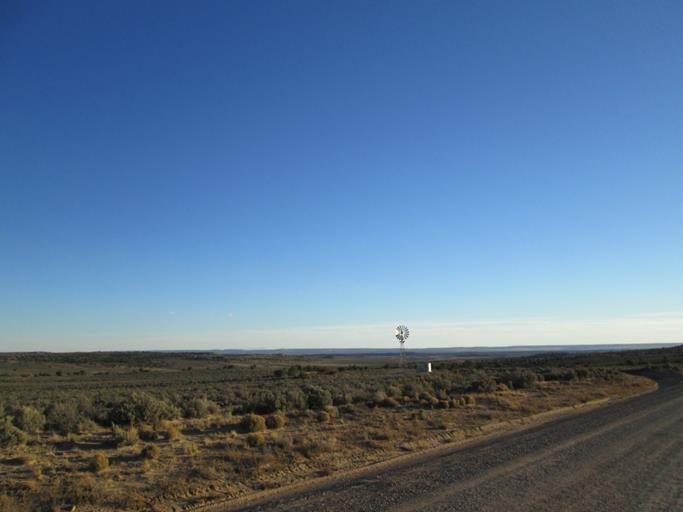 We have been warned many times about the road into Chaco. There is about 16 miles of very rough seemingly unmaintained gravel road. The first mile or so was pretty smooth going and we were laughing at the reports of what they thought were rough roads. We joked that they obviously hadn’t driven the Dempster Highway as we had. (Julie notes “Or some Mexican and CA roads.”) The smirk was soon wiped off our smug faces when we hit the first washboard section. It lasted for the next 15 miles. haha We were glad to hit the pavement at the park boundary! Julie notes “I think the name Chaco, depending on your pronunciation, is the native name for either `Shock-oh` (as in Òh My shocks!) or `Shake-oh` (Oh-oh-oh-oh now I have-ave-ave the sh-sh-shakes!). But it is well worth having your fillings shaken loose.” 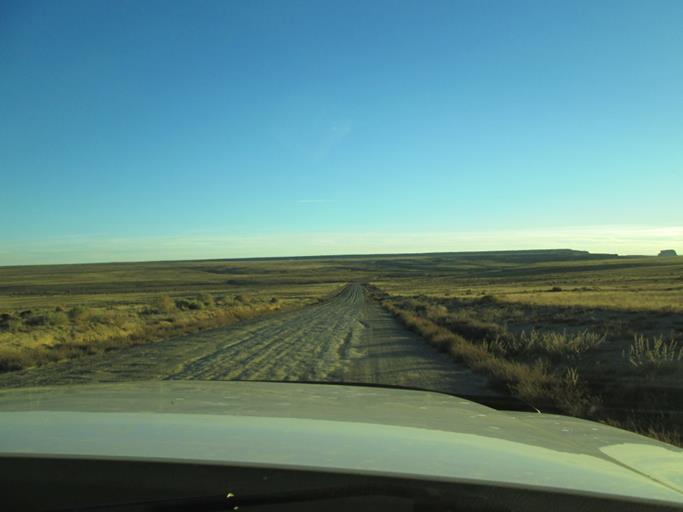 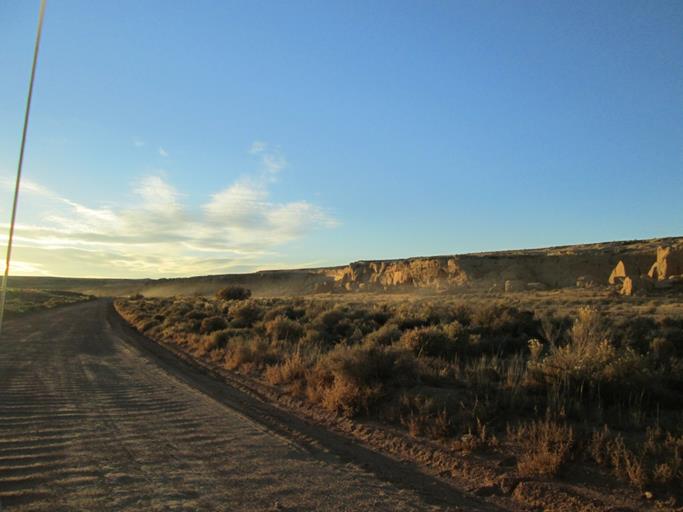 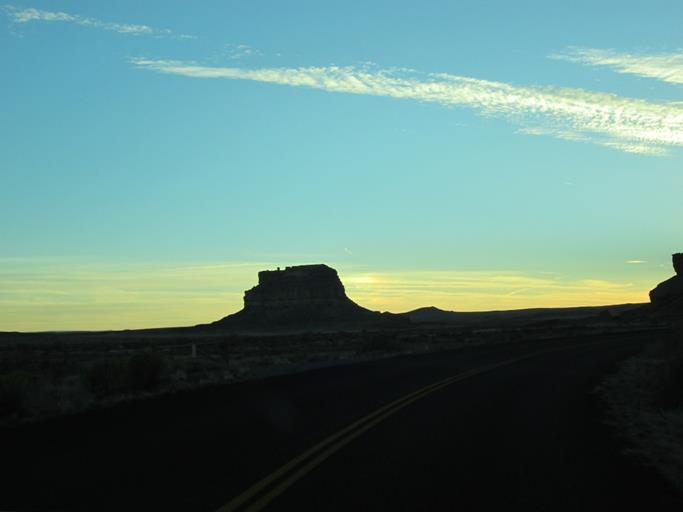 My first cold beer at the campground had to be opened very carefully as it had been shaken, the way I like it. J Not stirred. It was a cold Samuel Adams Boston Lager. It tasted great, even after been shaken.

Julie notes “I know some of you have been holding your breath worrying about how our iTunes have been behaving of late. Thank you for that, but you may exhale. The spell of over 2312 (out of 2908) was broken this morning. I would like to say that it occurred while `Morning Has Broken` was playing and that something like an earthquake or hurricane and not just the a mundane rattle of the plumbing set it off. But we have had some lovely times with the tunes. Last night we were lulled to sleep with some special songs. ‘Too-rah-loo-rah-loo-rah’, and ‘The Riddle Song’ both of which had been part of Dad’s funeral, the latter beautifully sung at the service by friends Vickie and Kathy. Plus 2 different and lovely recordings, almost back to back, of ‘Today’ by sister Krista, one recorded special for Mom’s funeral. We earlier had heard back to back ‘cousin’ songs – Roy Orbison’s ‘Leah’ and ‘Barbara Nan’ by the Beach Boys. And Ian and Sylvia singing ‘Mary Anne’ reminded us to answer your javelina question from way back when, Mary Ann S. No we didn’t really try to pet the javelina. They are as slippery as greased pigs so we weren’t able to catch it, let alone snuggle it. Hope that clarifies our sense of humour versus our sense of adventure. And one more maudlin musical reference, the song ‘Golden Years’ by Holly Dunn was playing while I watched 2 ravens soar and dance and play in a clear blue sky. Thanks iTunes for the smiles and tears. Now the new shuffle seems to have started off alternating between the Rolling Stones and Jann Arden. Trying to keep us both happy, maybe.