We are camped in the beautiful and amazing Chaco Culture National Historic Park Campground. The night was perfect for a fire but alas, I am not allowed any more firewood after carrying the Yellowstone firewood across numerous borders. I think Julie even changed her mind though and may want me to buy some more firewood. Julie notes “Yes a fire would’ve been nice. I was even glancing at the firewood bundles for sale at the last gas station but the memories were still too fresh. And this park does not sell firewood, understandably so, as we learned today. The Chacoan people that built these amazing great houses about 1000 years ago, had to lug their wood in from 40 to 70 miles away. So there has been a wood shortage here for a while. The rangers frown on burning the wood beams and such that have been holding up the ruins for last 800 to 1000 years, go figure! However the first archeologists and other travelers through here actually used the wooden ladders and beams, etc. that they found for firewood. Whoops!”

After touring a few of the sites today, it is very clear why this was named a UNESCO World Heritage Site. We first checked in at the Visitor’s Centre to get some information and make a plan. See, we are learning. We checked first this time before wandering aimlessly through unknown territory.

Our first hike left from the Visitor’s Centre and was about ¾ of a mile. It is one of 10 or 11 of the sites within the park. Una Vida was the name of this particular site. It was occupied between 850 and 1250 AD. We also hiked above Una Vida to view some petroglyphs. We then headed to the most famous site in the park, Pueblo Bonito for a 2 hour guided tour with one of the park rangers.

The sites are located mostly along a 9 mile road that loops through the Chaco NHP. Some of the sites however are in the backcountry and require some hiking to view.

It was then back to the campsite to relax (without a fire) and grill up a thick ribeye, red peppers, tomatoes, and boil some sweet corn. The feast we cooked tasted great after a big day in the outdoors.

Our campsite with cliff dwellings right behind us. 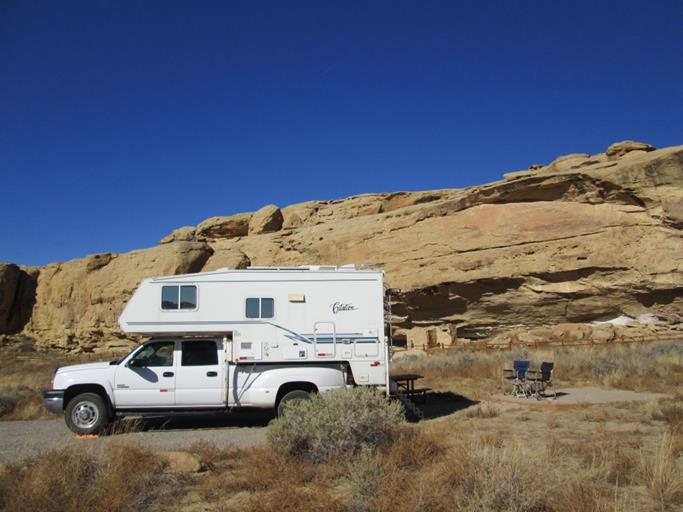 The cliff dwelling behind our campsite. 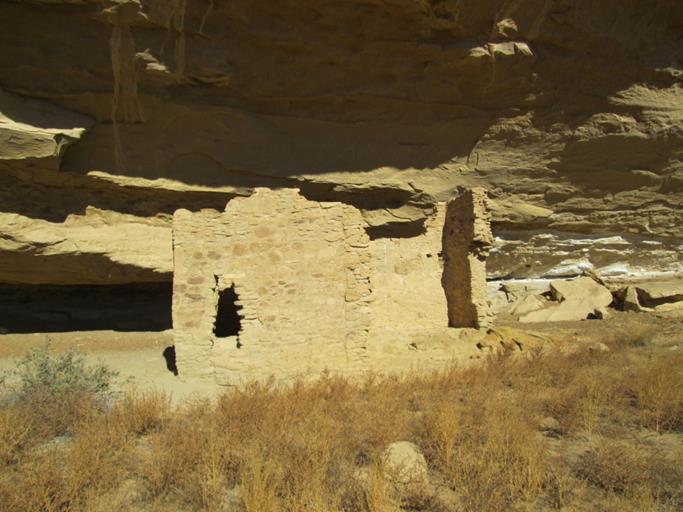 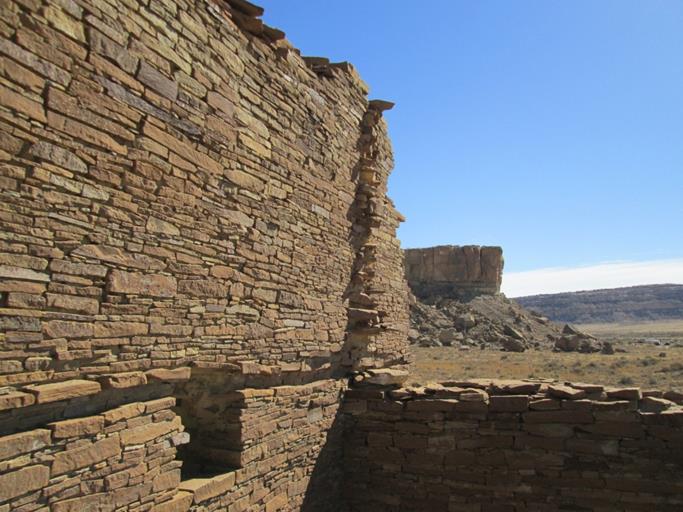 Una Vida ruins with Fajada Butte in the background. 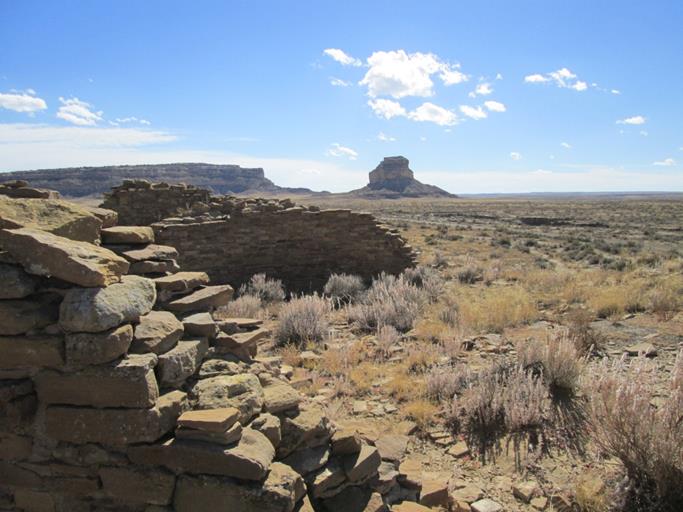 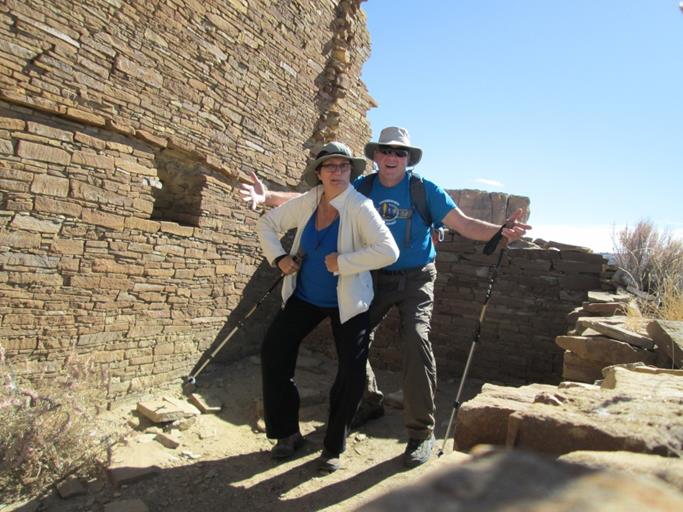 Tall Una Vida tourists who hit their head on the doorways. 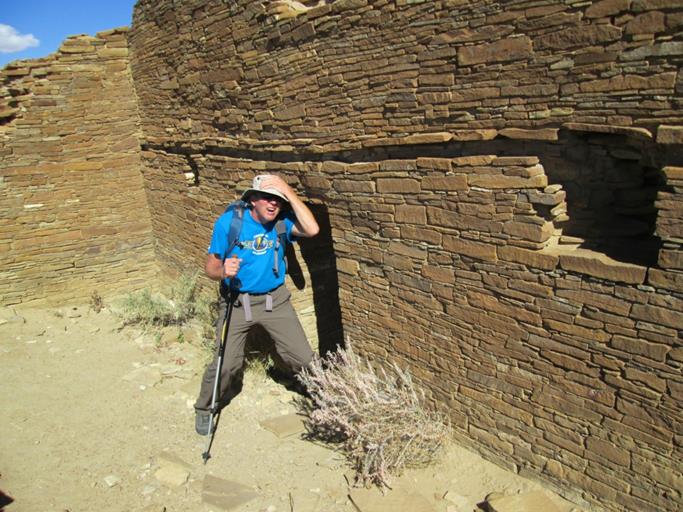 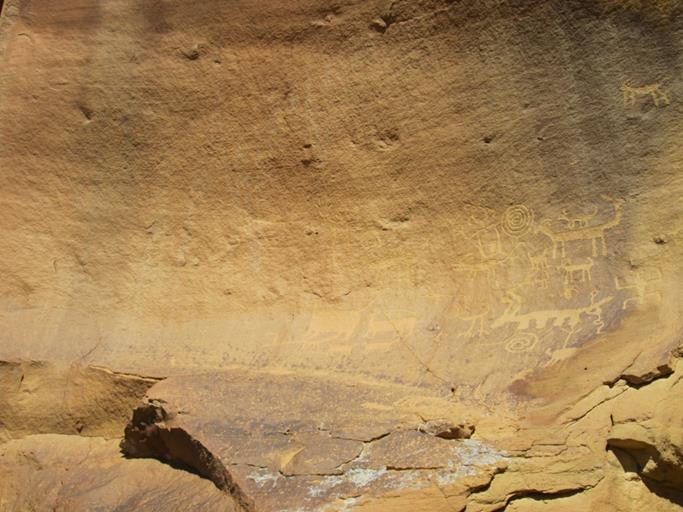 Pueblo Bonito is bonito! Julie notes “This is the most investigated and documented site here. And we could see why. It is also the largest. New research is suggesting these great houses were just big party places and homes of the big muckymucks not where the regular Joe Blows like you and I would live. Us working stiffs lived across the way on the other side of the wash. But as the ranger, Cindy, told us, for every 2 archeologists there are 4 different opinions.” 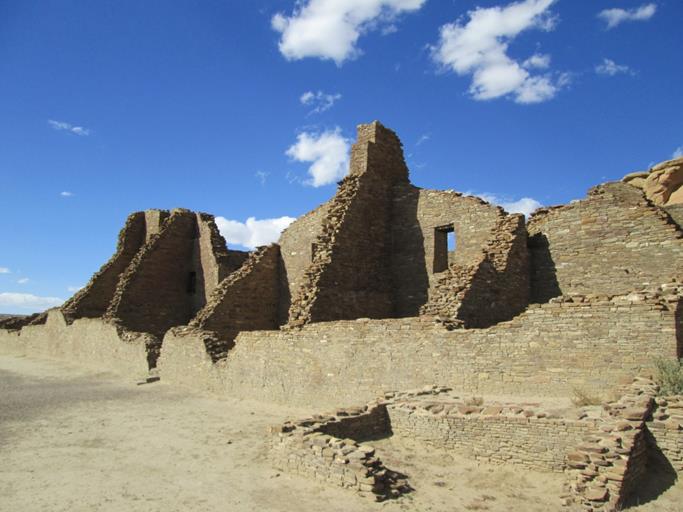 Julie notes “A great kiva for big celebrations and ceremonies.” 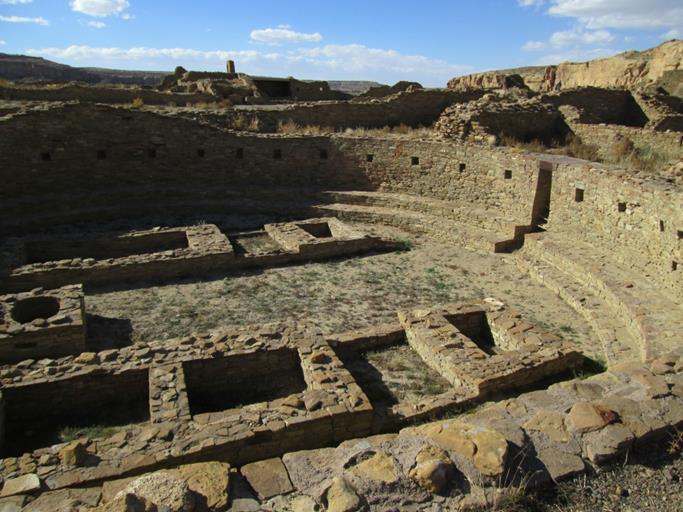 Julie notes “The famous 4 doorways. We hadn’t heard of it before but we’re learning there is a lot of stuff we have never heard of. Pretty amazing alignment. This is how they found these structures. They have been reinforced in some areas using different methods and drainage issues addressed to prevent further deterioration but this is what they found. Wood lintels and all.” 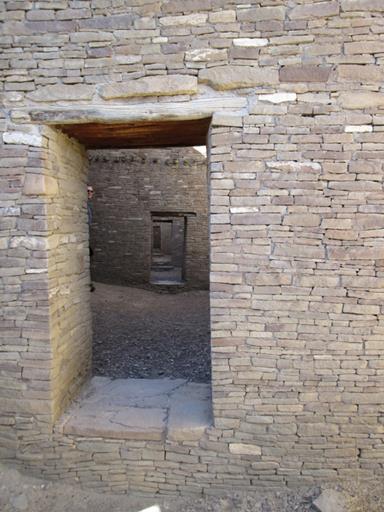 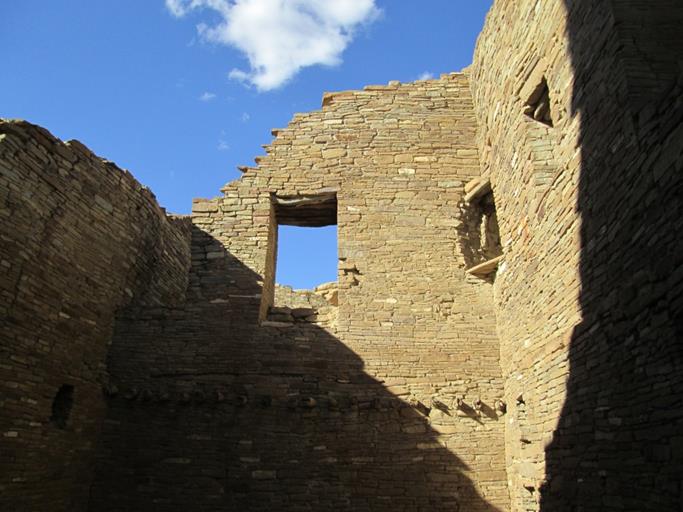 Pueblo Bonito tourists that have learned to duck. 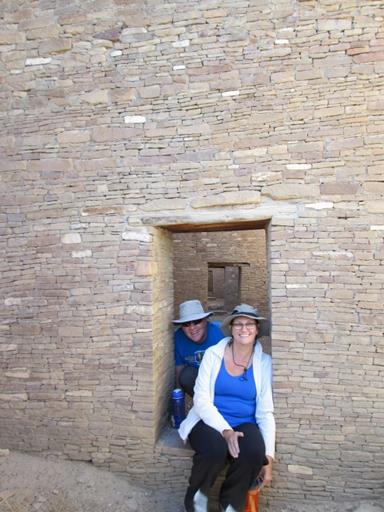 Fajada Butte with a raven taking in the view from the overlook. Julie notes “I’m surprised he didn’t mention that he took this while he was waiting for the old crow to get her butte out of the gift shop.” 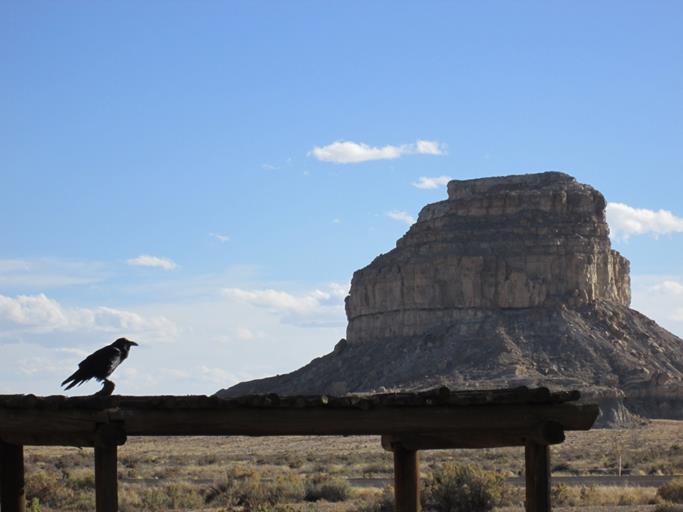 Grilled bread with oil and balsamic vinegar, ribeye, corn, peppers, and roasted tomatoes with parmesan. Delicious! Julie notes “This beat any of the fancy restaurant meals we have had of late. It also helped that I had worked up a good appetite.” 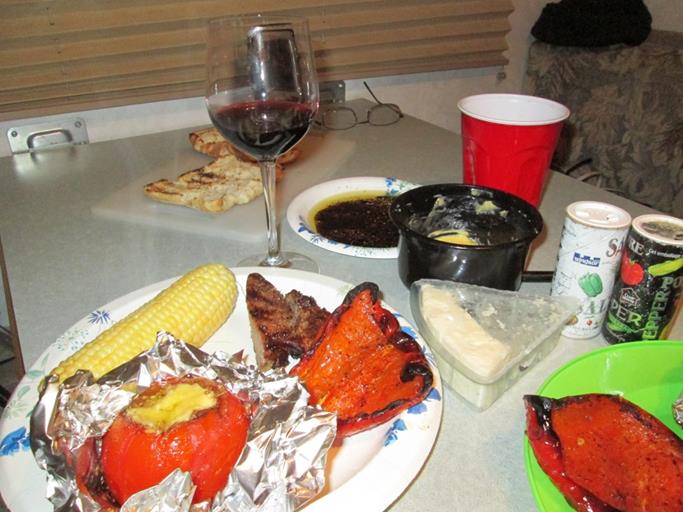 Our corn cooking Everything Pot. Julie notes “Thought we better include this as we saw a certain family Thanksgiving picture where a very similar pot was in use. A here we thought we were the only ones to buy one of these about 30 years ago.” 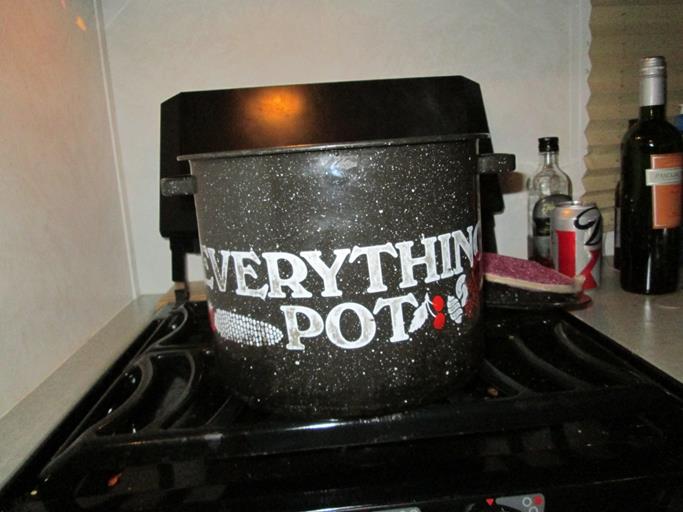 Julie notes “A little windy tonight so glad that we didn’t try and offer some other campers a large sum of money for their firewood. But as we’ve been wandering about lately I’ve been having cravings for turkey with stuffing. Could be that we missed Canadian Thanksgiving but then I realized that there are sage bushes everywhere and they are getting ready to dry up and blow away and smell amazing. Now I didn’t think I had a lesson for you today but this reminded me. Lesson 124; “Don’t open the vehicle window to take a picture (no matter how scenic it may be, even if it is the Windmill Money Shot) where there are large groups of turkey vultures. There is likely a reason they are all hovering there and that reason likely stinks.” Lesson 124a; This can also apply to large groups of human turkeys or human vultures.”