Another day at Chaco Culture NHP. We planned a few more site visits to various ruins and a hike to the Pueblo Bonito overlook high up on the mesa above the valley floor.

Our first stop was a site called Hungo Pavi. We followed the trail around the ruins in awe of what the Chacoans had built here and amazed at what was still standing after 1000 years in the desert.

We then headed down the road to the trailhead for the Pueblo Bonito overlook and the Pueblo Alto Complex trail. The hike had an elevation gain of about 270′ and was about 5.2 kilometres. The elevation gain all happened in the first 200 metres. You were then on the cliffs and mesa above the valley floor. But first, there were the Kin Kletso ruins to tour after hiking a short distance from the trailhead.

After a rewarding and exhilarating hike in some pretty strong winds we made it back to the camper for a late lunch. After lunch there was one more site we wanted to tour. Right next to the parking area was the Pueblo del Arroyo ruins.

We were tired and wind burnt and ready to head back to the campsite to relax and have drinks and dinner. I think we earned both today. 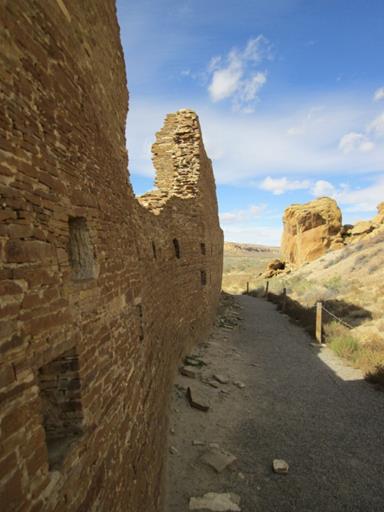 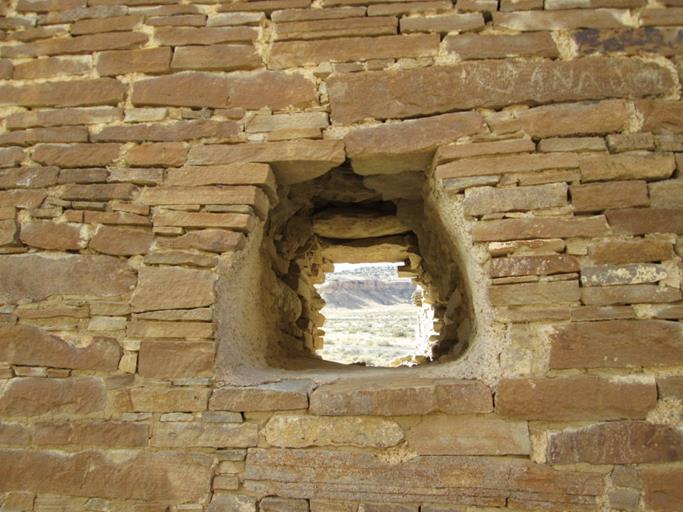 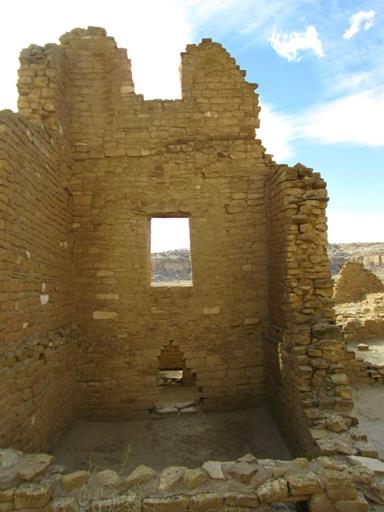 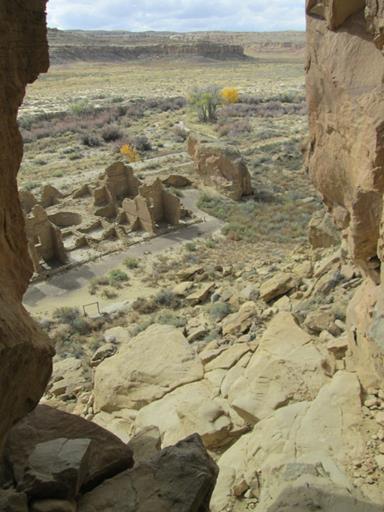 The hike to Pueblo Bonito overlook and Pueblo Alto complex.

The trail requires some scrambling over large boulders and then follows a narrow fracture through the cliff. Julie notes “Yes I know what you’re thinking ‘Julie? scrambling over boulders? With two left footed hiking boots? Bad idea!’ But I made it, not without a few ‘OMGs!’ though.” 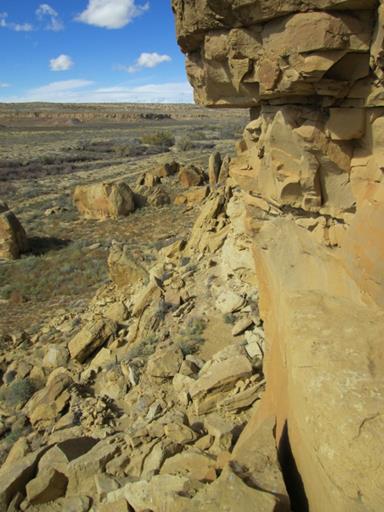 Julie notes “Yes this is the trail. You can imagine my face when I realized that.” 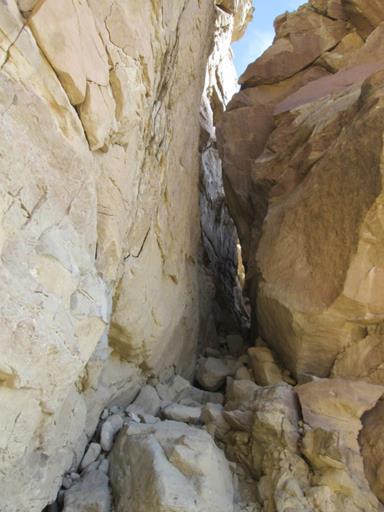 Julie making her way up the trail. Julie notes “But I managed to squeeze through.” 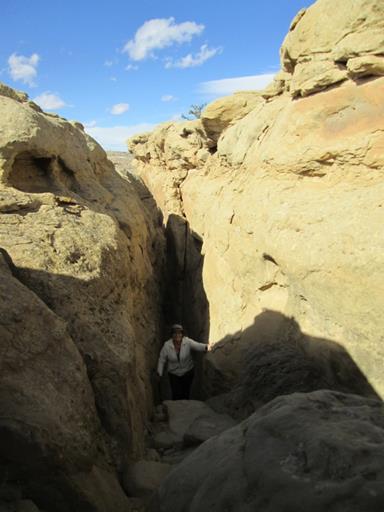 Pueblo Bonito from the overlook. 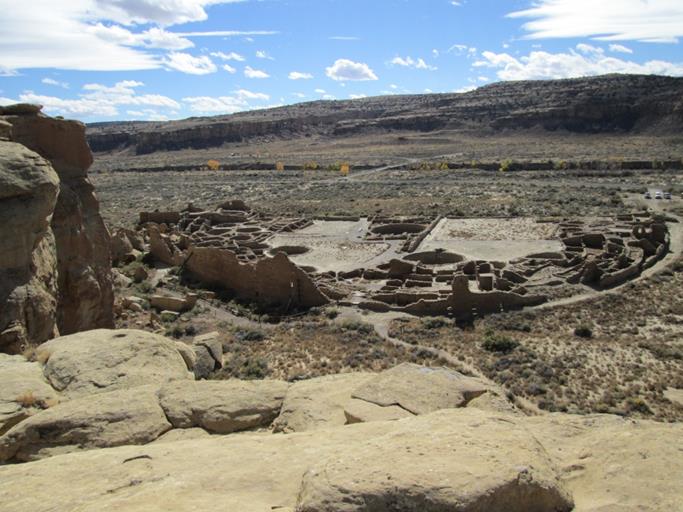 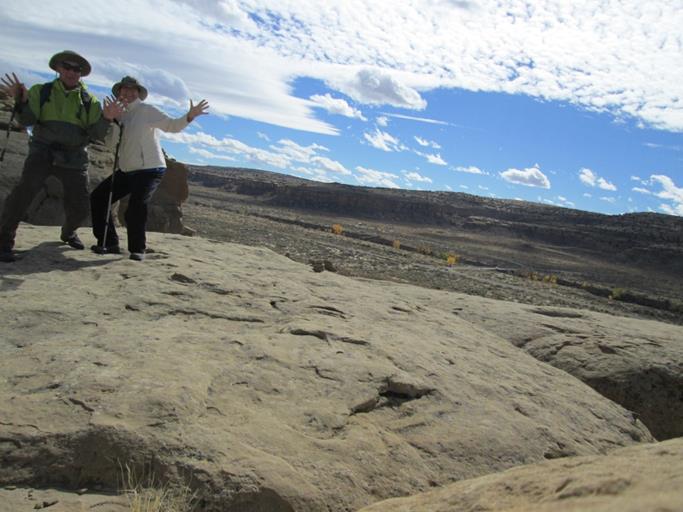 New Alto in the Pueblo Alto Complex on top of the mesa. 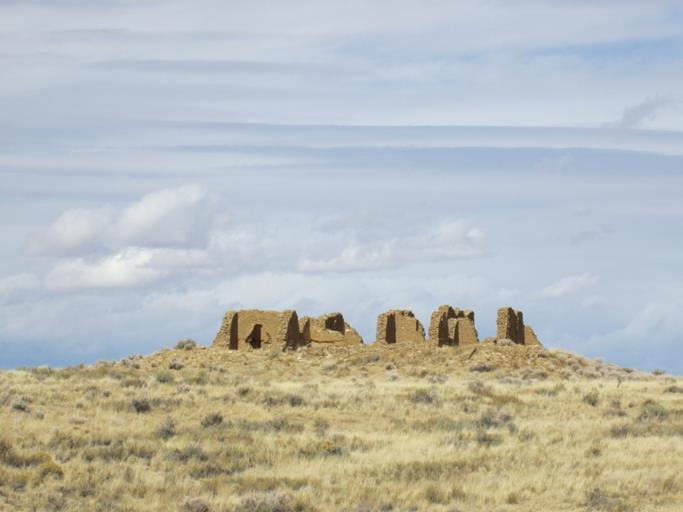 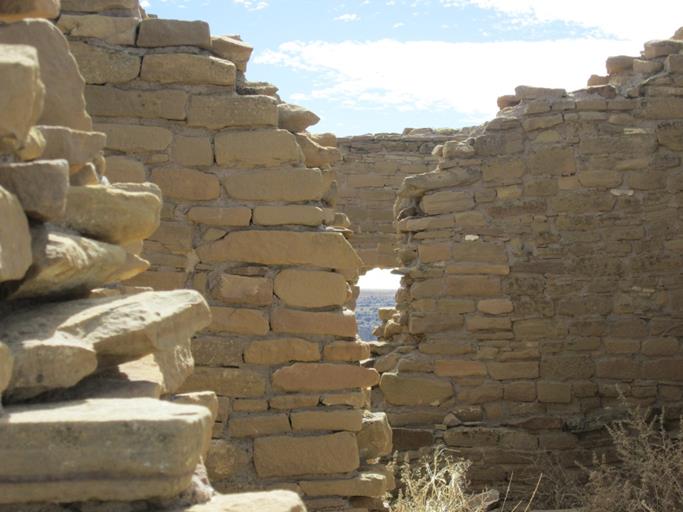 Another shot of the happy but windblown tourists. Julie notes “No wonder I was so thirsty. Note to self – close my mouth in a dust storm.” 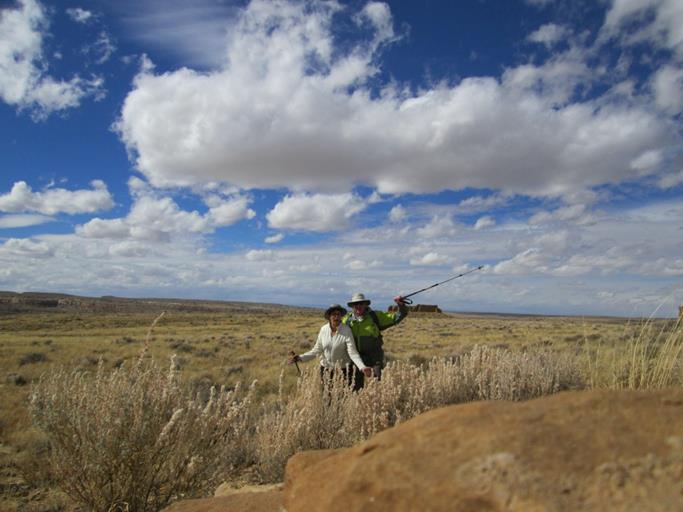 Julie hiking along the edge of the cliff. Julie notes “Luckily the wind was blowing me into the cliff and also my gazelle like surefootedness helped as well. These Chacoan people also never wore progressive lenses obviously.” 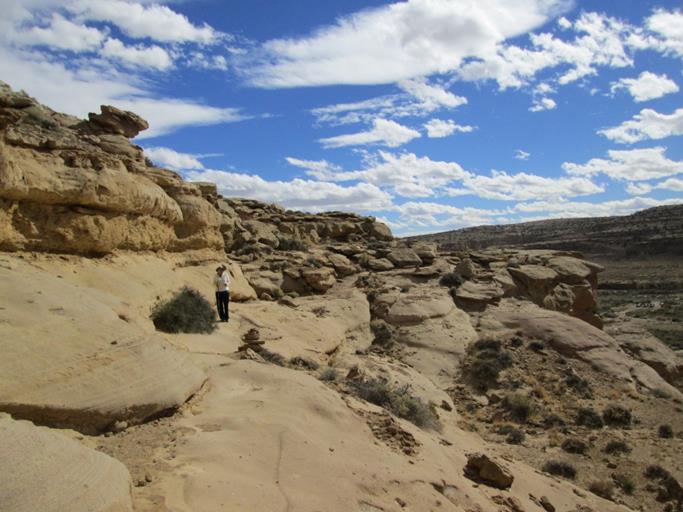 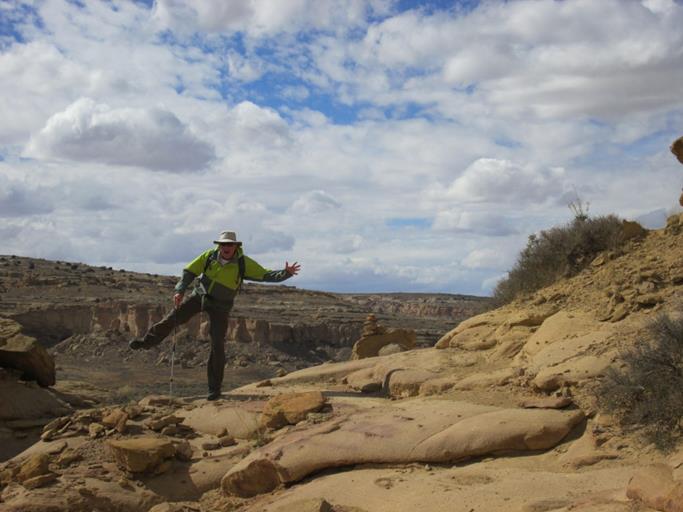 A view of the valley from the cliffs. 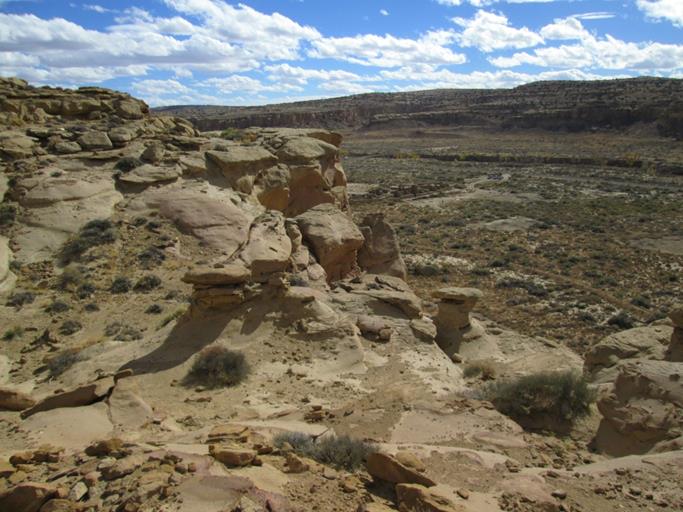 Now we just have to make it back down to the valley floor – the right way! Julie notes “I told Brad I could always parachute down using my underwear. But he was out of luck because his have too many holes. Looks like he’s ready to catch me if I jump.” 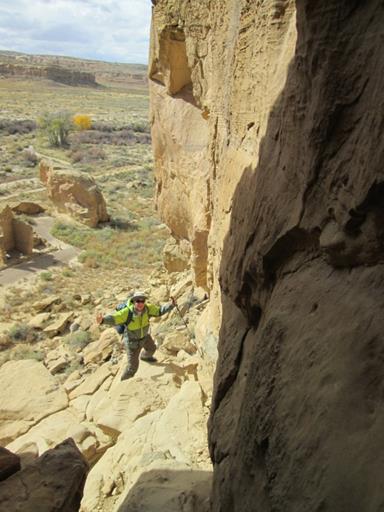 Julie notes “Brad told me to just close my eyes and feel my way down. Hmmmm.” 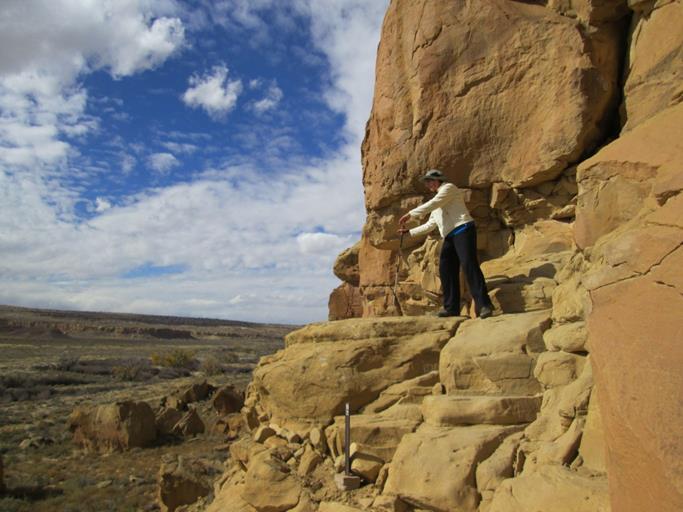 And finally, to end a big day, we visited the Pueblo del Arroyo ruins. Julie notes “Crazy cool place. One of the park restoration fellows who was working inside the building showed us a few interesting things. He has worked here for 22 years and grew up in a nearby pueblo. Very proud of his heritage. And he reminded me of Brad’s dad Albert.” 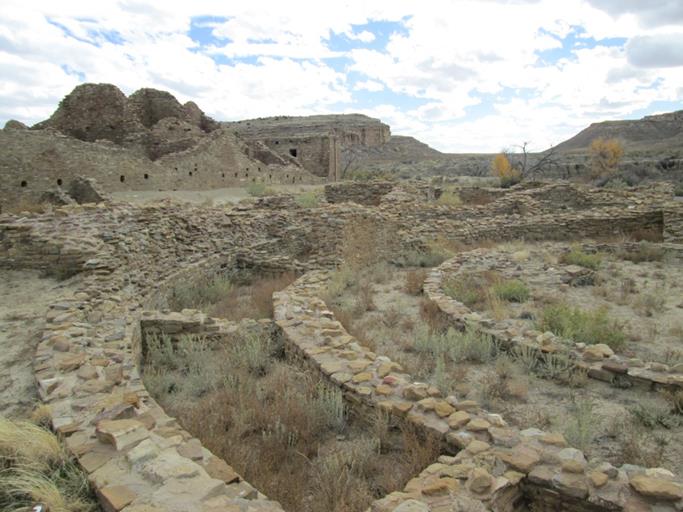 Julie notes “Speaking of dads, Jim Bob, o.g., our newly named thermometer man, told us that the temp got down to 3 C outside and 7 C inside last night. We decided on the name Jim Bob, one of Dad’s many nicknames, as Dad was always the first on the email in the morning with the weather report from Moscow. Often followed by a potato report. He always signed his emails ‘og’ for ‘old geezer’ but in the case of Jim Bob the weather man, the ‘og’ can stand for ‘often guessing’ ‘Oh goodness’ ‘outside’s groovy’ and so on.

Thank you to everyone who made suggestions. As you know we love comments, suggestions, chuckles and even gasps!

Aunt Lynne was very close with her submissions of Jim Boy (on nice days) and Herbie (on cold days) based on their preferred climates. So she will get the prize, which is our wish for her to have great weather for all of her ventures. And we will likely use most of your ideas and more as we get acquainted with our new electronic soothsayer.

Other suggestions: Hope I didn’t miss anyone. Let me know if I did.

Let me just tell you that it is VERY windy and dark out there right now, the camper is rocking, chairs are blowing away and Jim Bob o.g. (Overly Gusty) is still smiling and waving with a sun/cloud over his head and sun glasses on. And we love him for that. I wonder if the potatoes are in for the winter.”