We left our site at Homolovi State Park near Winslow, AZ today but not before checking out one more Hopi ruins site located on the Little Colorado River.

Our campsite in Homolovi State Park. 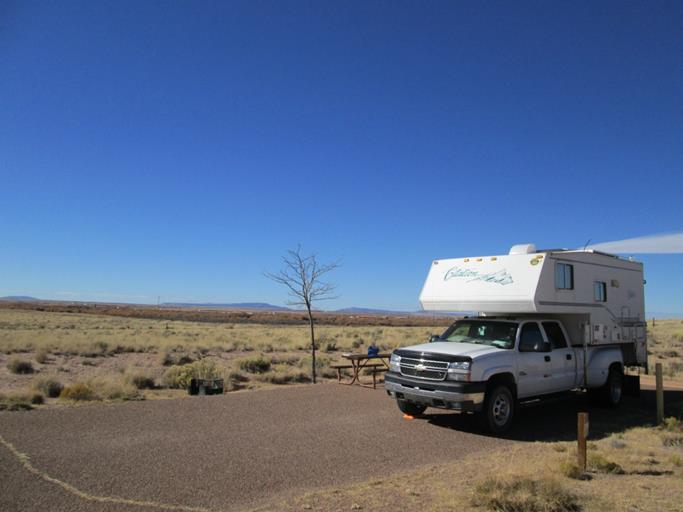 Julie was leading the way trying to find the Hopi ruins for us to view. Julie notes “This archeology stuff isn’t as easy as Harrison Ford makes it look in his ‘Raider’ movies. Luckily though we never once needed to use a bull whip (outside of the camper) or had to out chase a giant boulder. As you’ll see further down, we did encounter some troublesome boulders though.” 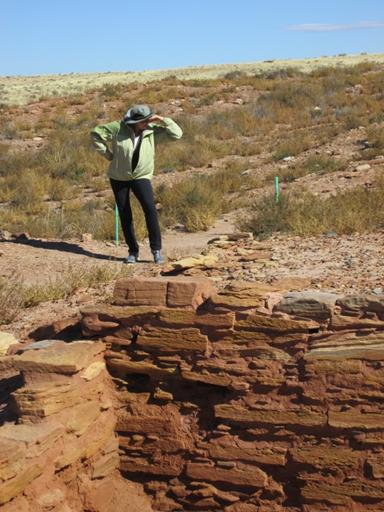 Some of the unexcavated ruins with archeological survey stakes still in place. 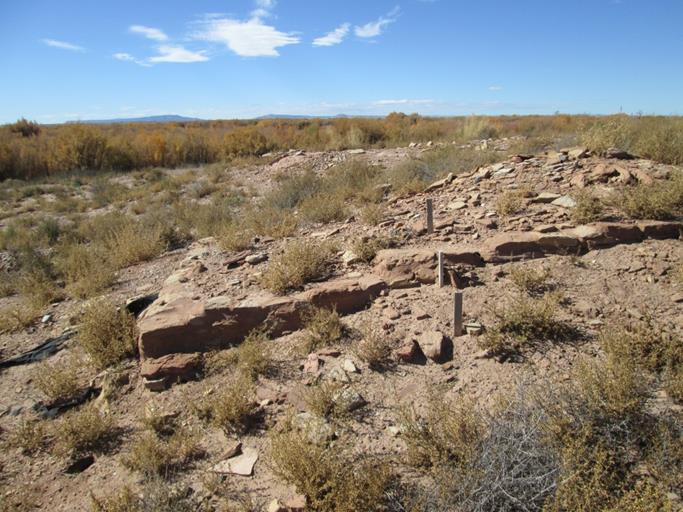 After our brief site tour we headed westward on I-40 towards Flagstaff, AZ. Before we got very far into the strong headwind we decided to detour 6 miles south to see the Meteor Crater. Julie notes “We heard they ‘crater’ to all sorts of visitors. There were some fun signs on the road approaching the crater sight. One said ‘Speed Limit – Vehicles 50 mi/hr, Meterorites – 26,000 mi/hr’. And ‘Enjoy the impact!’ Yes I see that there might be a career for me in writing ‘punny’ signs.” It was very impressive to see the impact crater. The crater itself is about 1 mile in diameter. The site was used to train Apollo astronauts and has a lot of memorabilia of space exploration. The original research conducted here led to a much greater understanding of our solar system. Julie notes “Yes I made Brad watch the 10 minute movie and read parts of the brochure out loud to him. Until that said brochure mysteriously ‘disappeared’? We declined the hour long meteor rim tour that was included in the slightly heavy entrance fee as we had miles to make yet plus it is very windy up there. I am not sure Brad would pay to have me hauled out if my feather weight body was accidentally blown into the crater.” 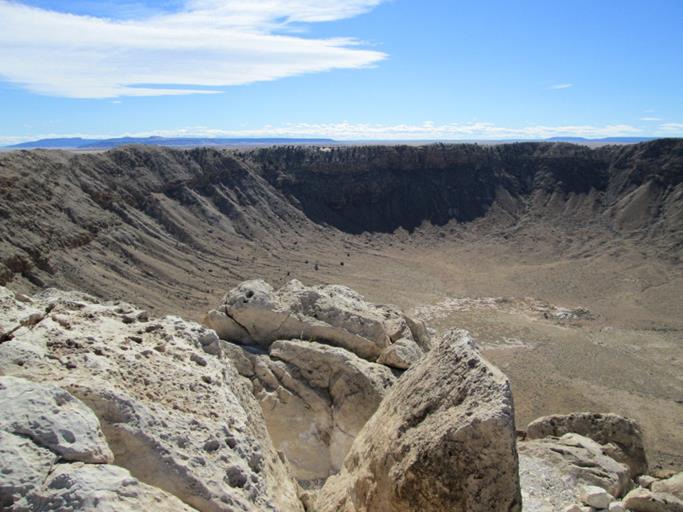 Julie notes “Note the telescopes that Brad could watch me through as I scurried around the bottom if I did happen to blow over the edge. They have a life size astronaut figure down there so at least I wouldn’t be lonely. I should have had a speech ready. How about ‘One small step for woman…'” 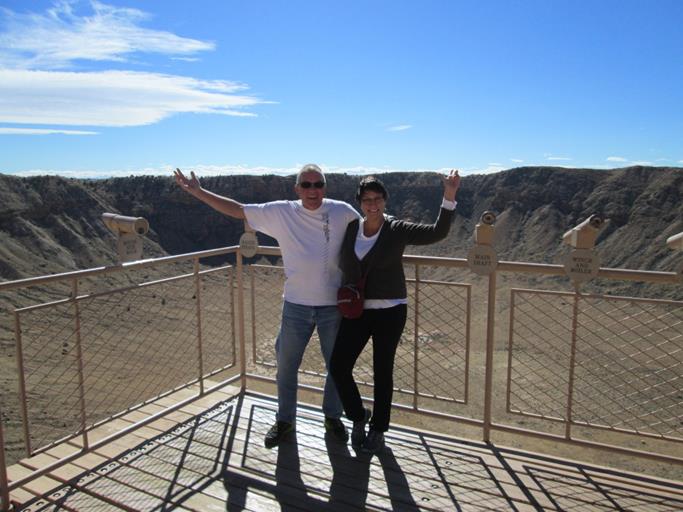 A view of the desert and mountains from the visitor centre courtyard at the Meteor Crater site. 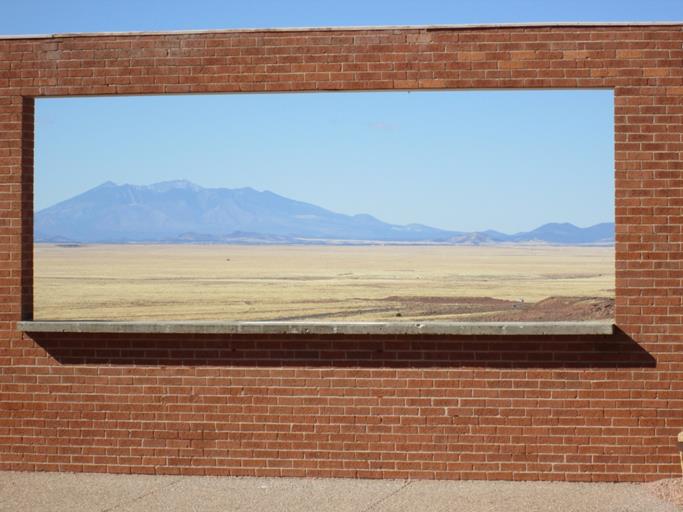 Julie took a little side trip and I agreed to pick her up again if she could land the Apollo Capsule in the courtyard. She did pretty well for never having flown a space capsule before. Her only previous flying experience has been her broomstick. Julie notes “Sometimes he is just funny isn’t he?. (insert wicked cackle here) Gotta let him have that one, but as usual he will be watching his back (and sniffing his drinks for hints of that arsenic water I stashed up on at Ojo Caliente spa.) (insert more wicked cackling and sounds of potions gurgling and brewing)” 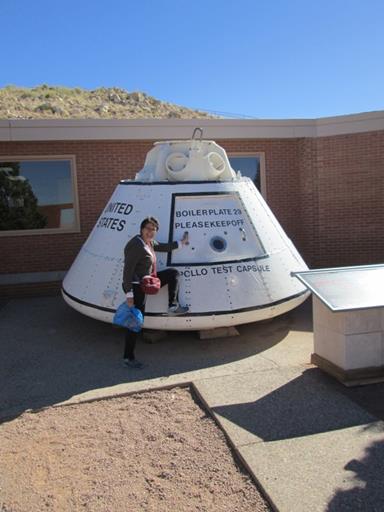 After our tour of the site, some lunch at the onsite Subway, and the obligatory trek through the gift shop we headed out towards Dead Horse Ranch State Park near Cottonwood, AZ. Being ones who do not like to backtrack, we decided to take the seemingly high-grade gravel road, the Chavez Pass Road. This road led us south through some beautiful desert and then the Coconino National Forest. There are numerous Forest Service roads that head off in every direction. Most of them are dead ends.

This was one of the unheeded warning signs. “Primitive Road – CAUTION – Use At Your Own Risk – This Surface is Not Regularly Maintained”. This is our kind of road. 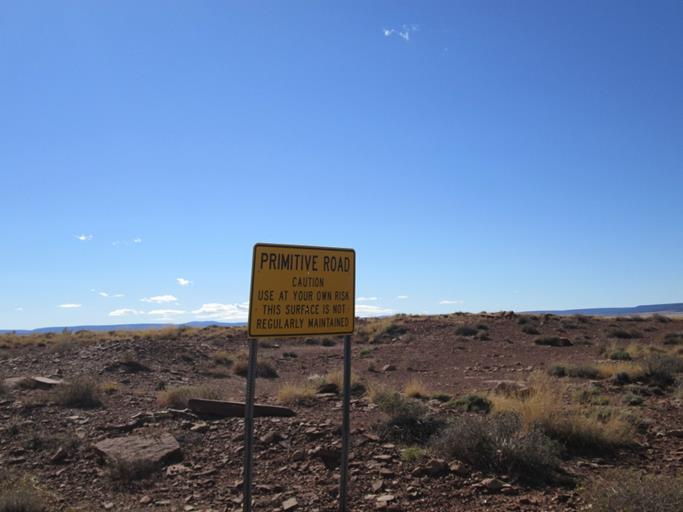 So far, so good. Level, gravel, a little rough, but pretty good driving conditions for our truck and camper. 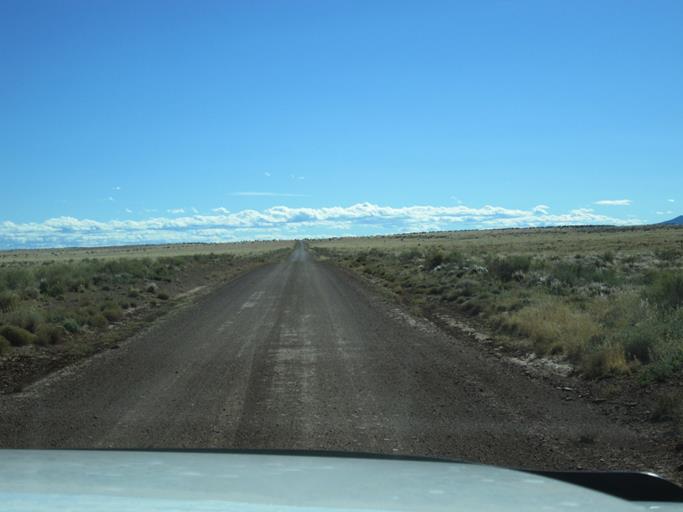 Nice scenery and no other traffic. We only met 2 other vehicles the first hour of driving. Julie notes “One more hint gone unheeded. We have no fear or something. My book map shows a nice straight gravel road. It wouldn’t lie would it?” 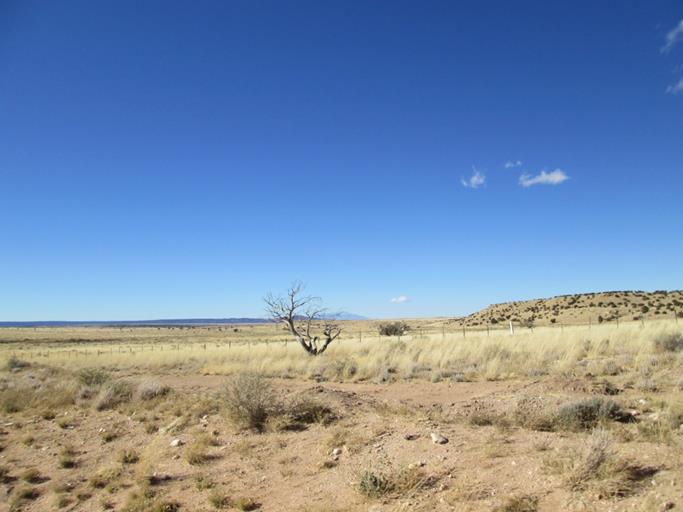 Julie notes “Still a bit of a breeze out there. The iPod with Terri Clark’s help sang about ‘tyin’ a heart to a tumble weed’ and we saw a few of those as we drove along today.” 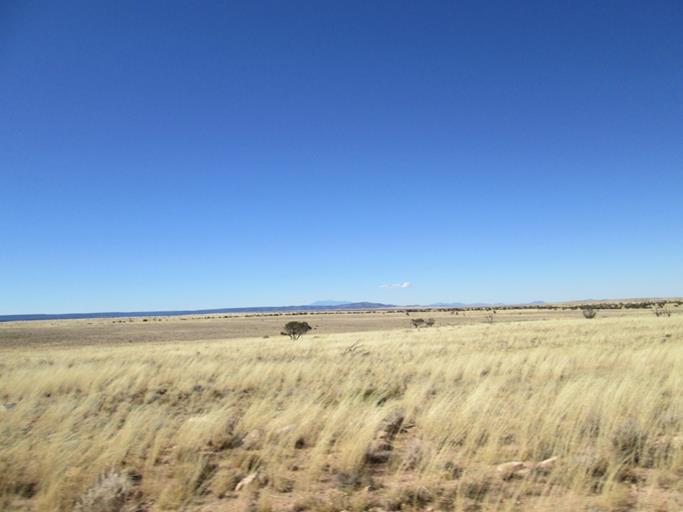 Left or right? Follow the graded road or the GPS? 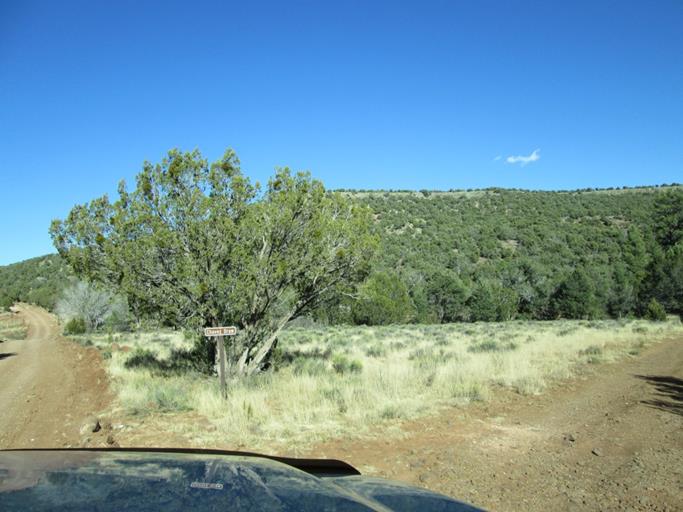 A little road work was required after we first followed the graded road instead of the GPS. After a short distance, we decided to turn around and follow the GPS. 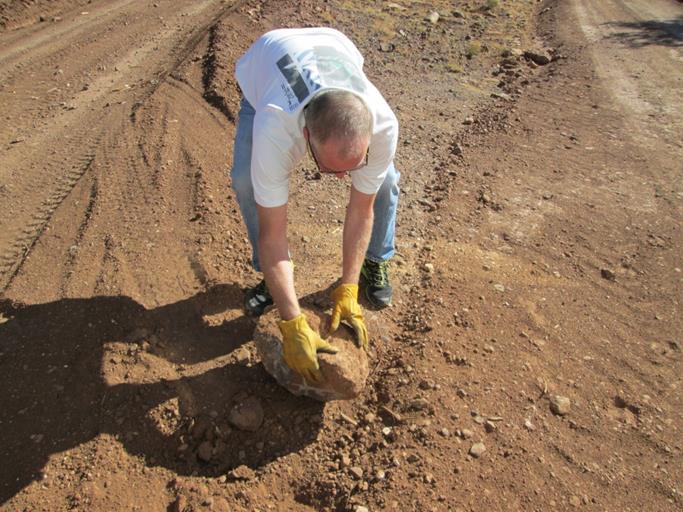 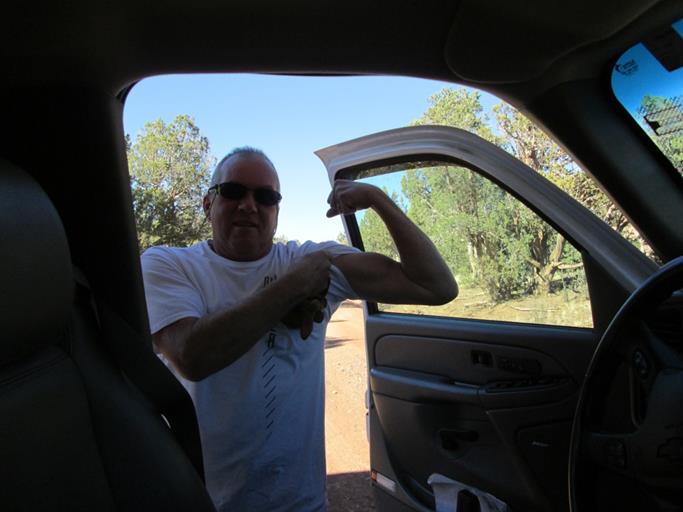 Wrong! The road started to deteriorate quickly and became a 4X4 track. Lesson #130; Follow the graded road – ignore what your GPS tells you to do. Julie notes “We have named her Bambi as she seems to want to get us lost in the woods, in hunting season.”

Checking out the trail ahead. Julie notes “For once the pain in his backside is not caused directly by me, just the jarring roads.” 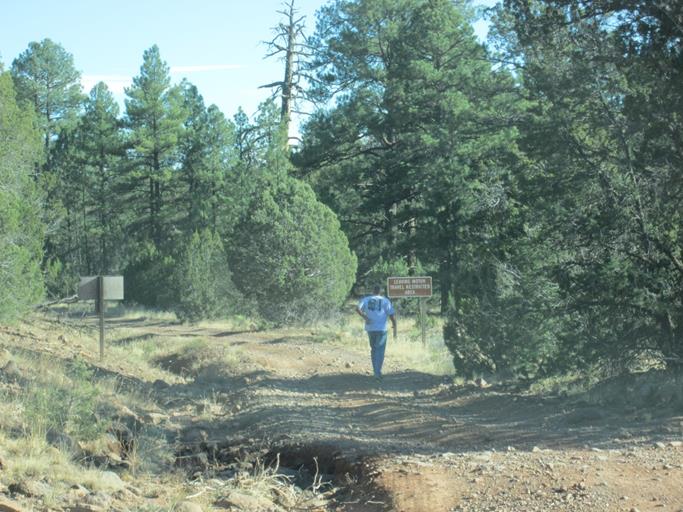 We decided, at least with the camper loaded on the truck, that we should follow the graded road. Julie notes “Nooooo! But there were parts of the road ahead that would likely cause us to tip over, that is if we made it past the trees overhanging the road. We were worried we would have to travel all the way back to the Meteor Crater because of the myriad of dead end roads that Bambi was showing us on the GPS. We had not heard any banjo music yet though so weren’t too afraid about being lost for the night out here. It was a beautiful but bumpy place. The actual music playing as he headed back scratching his head was the ironic Cowboy Junkies again singing “this ain’t no long journey home, this ain’t no trip across the tracks, this ain’t no dead end street, there ain’t no turning back…” I think that might be ironic. I am never sure. I should ask Alanis Morrisette, ‘Isn’t it ironic?” 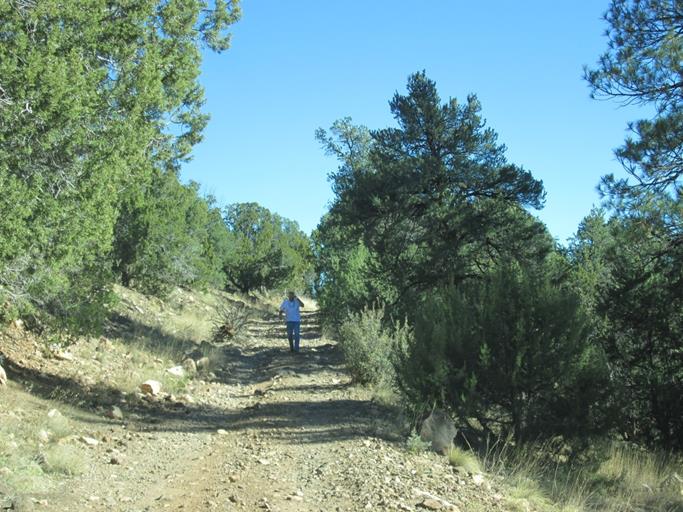 A short distance down the right path led us to a hunter, and his faithful companion, who knew the area and gave us some good directions. Julie notes “Windmill Man meets Windmill Hunter and Friendly Dog. I was not fast enough to catch the multiple arm (and tail) actions involved by all three participants. My impression, from the arm movements, lead me to believe the Windmill Hunter was saying ‘WTF? (Why This Forest?) You can’t get there from here, you crazy Canuck tourists!’ But they were actually windmilling about RVs, real roads and where we had seen elk tracks, yonder on the rock path.” 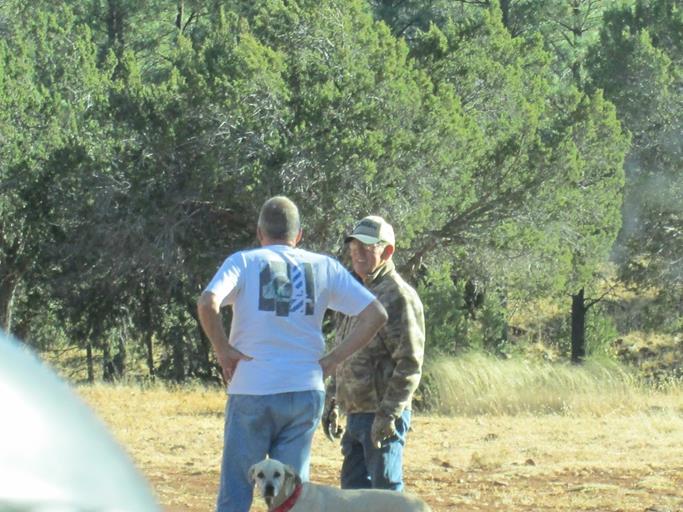 After another 15 kilometers or so of graded road we joined up with Highway 87. 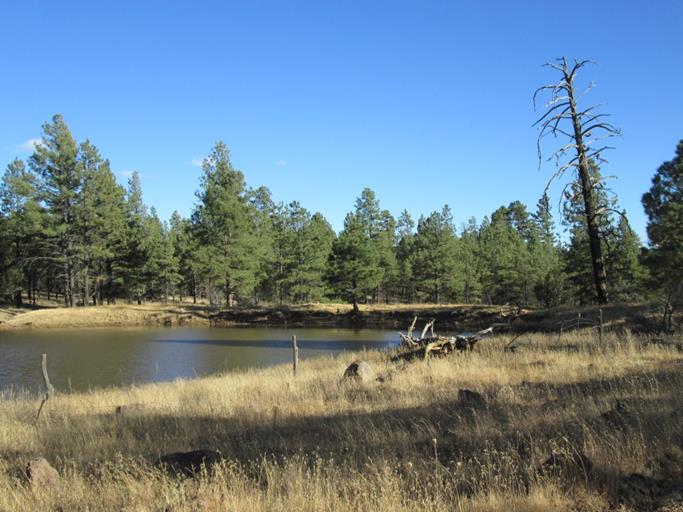 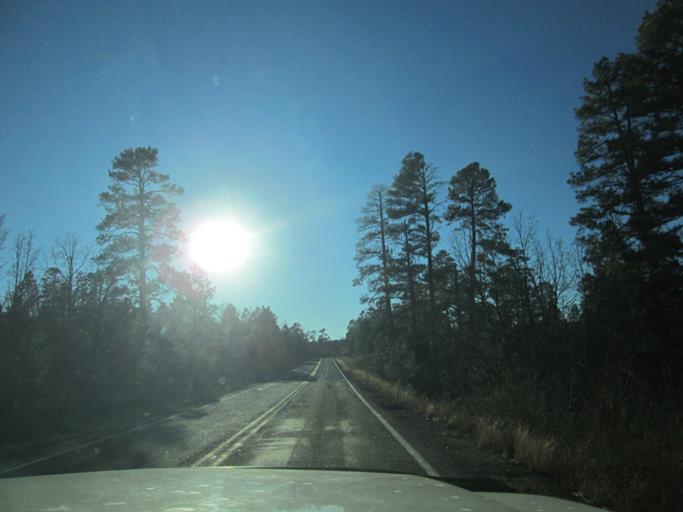 We started descending from ~7,500′ above sea level and 10C to ~3,200′ and 17C, even as the sun was setting. Nice! We arrived at Dead Horse Ranch State Park and got a nice site just before dark. Julie notes “We are expecting to have scrambled eggs for supper after our extreme version of a Brad/Kelly H. shortcut.” 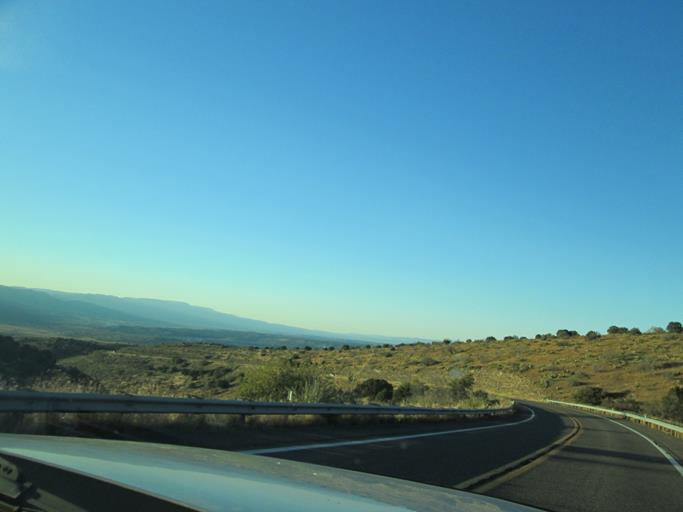 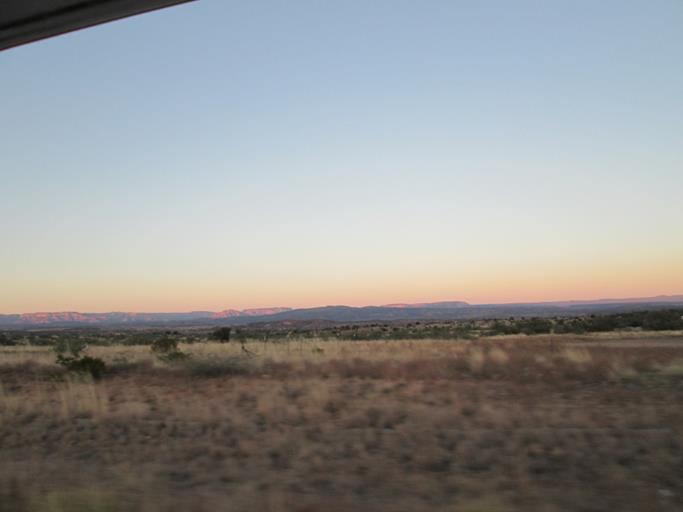 A great day. We love days like this; traveling through unknown territory with beautiful diverse scenery and great clear weather. (Julie notes “And no Deliverance banjo music and a fridge full of food and a furnace and bathroom with us.”) We finished the day with a campfire, some bratwurst cooked over the fire, and a couple of drinks. Julie notes “I haven’t been brave enough to check the eggs yet. We ‘shell’ see later if the final ‘yolk’ is on us.”