Another day in paradise! This is the good life. We are so lucky to have friends who invite us to share and enjoy such a beautiful place. Dan and Maureen are fantastic hosts and Bill and Mary Ann so generous to offer us their accommodations. Having the happy couple of Lola (Kelly M.) and Brenda there really makes for a fun time for all.

Julie notes “Well this day in paradise did start with a bit of jolt at 7 am. It sounded like the house was being attacked by a very large swarm of big angry bees. Turns out the gardening staff had arrived with a leaf blower and other tools to do some yard maintenance. We think maybe Bill has been reading these blogs and arranged this early morning attack as a way to gently suggest we move on. But he will have to be less subtle to budge us from paradise. Thanks again for this real treat.”

Today we went with Lola (Kelly M.) to a few shopping spots; some new ones and some we were at yesterday. We also toured a few places around the greater Phoenix area. Julie notes “Dan and Maureen were busy burning up the golf course. And it was Brenda’s spa day. Leaving Lola (Kelly M.) in charge of us.” 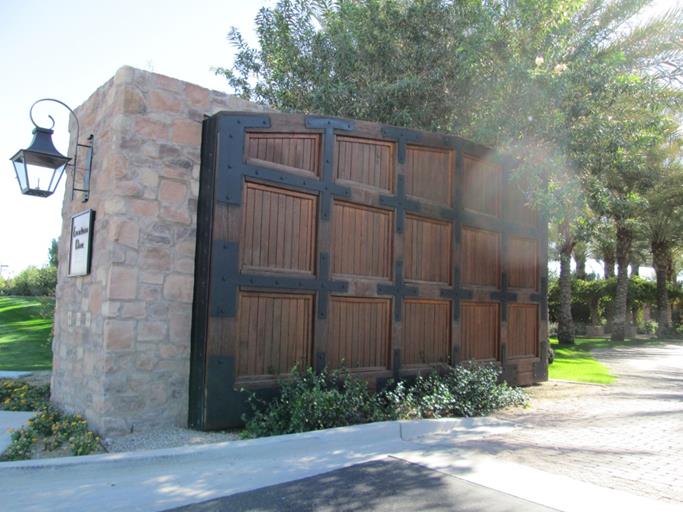 The first stop was BevMo; another warehouse wine, beer, and spirits outlet. It is huge but not quite as big as Total Wine. This, however, was one of Frank’s (Lola’s husband) favourite places when he visited. This shot should make him green with envy. I think Frank even has a member card! 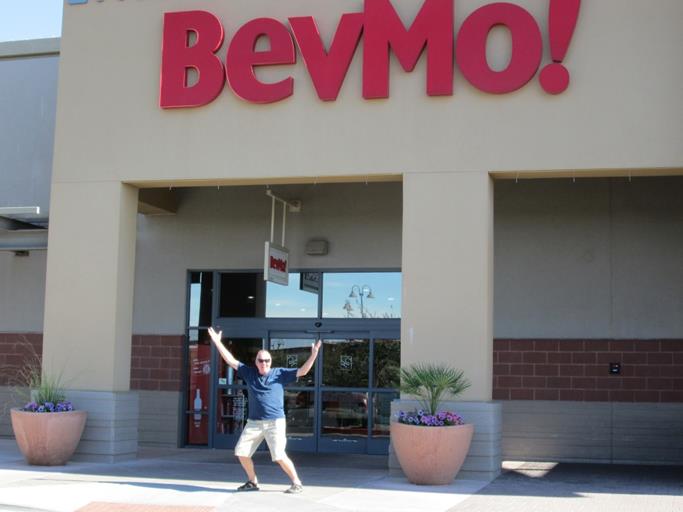 While I was shopping in BevMo, Julie wandered off on her own and found a candy cane. She wouldn’t let go. 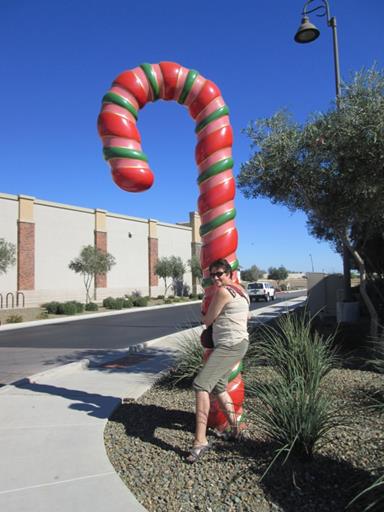 I told her tongue would freeze to it if she licked it so she had to prove me wrong. I guess she knew the weather report for Phoenix was in the high 20C’s today; 28C I think. Julie notes “Their candy canes taste a lot like plastic here.” 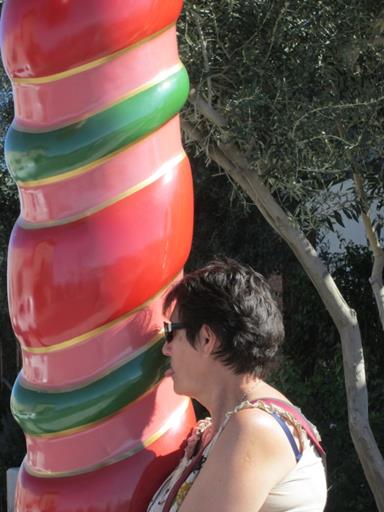 Julie captured this windmill shot as our chauffeur Lola toured us around the area. 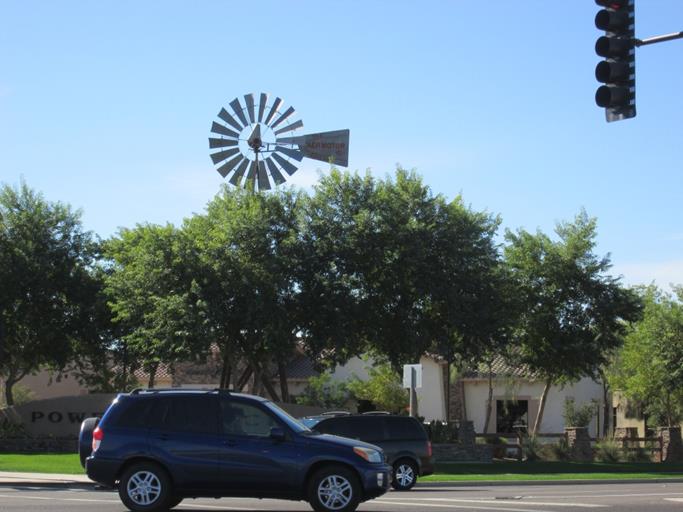 Lola (Kelly M.) toured us by the enormous Mormon Temple being built. I had to get in the picture to give it some scale. It is HUGE! Julie notes “This even makes Brad’s head look small. Those of you familiar with his huge cranium will relate.” 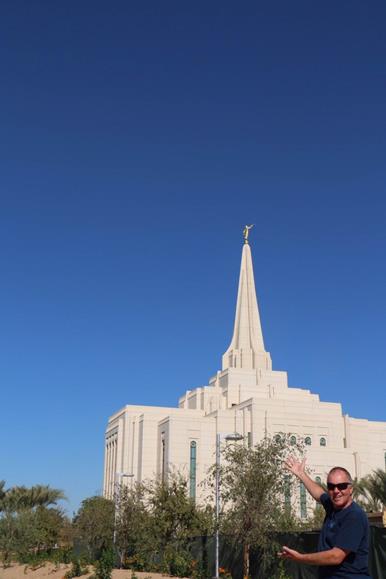 Next was some shopping at Dick’s Sporting Goods or as Brenda calls it “Big Dicks” Sporting Goods. haha Julie notes “Yes this is the company I have been keeping. Brenda and Maureen were driving us the other day telling us to keep our eyes open for ‘Big Dicks.’ Gasp. I was aghast and kept my eyes shut the whole trip.” 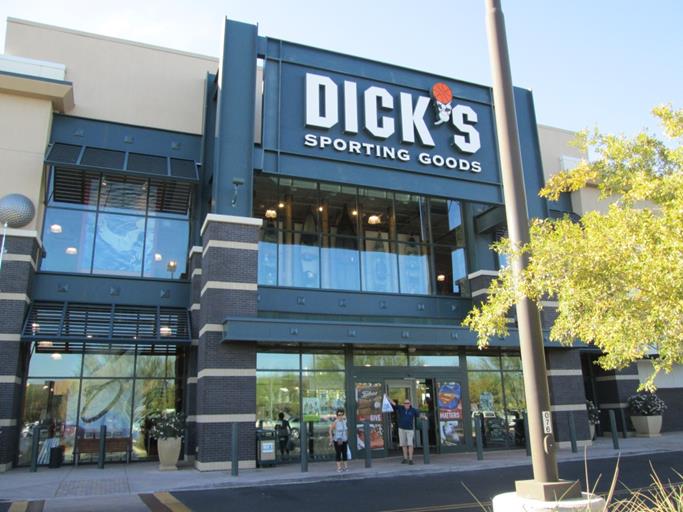 Lola then took us to Crown Plaza Resort San Marcos in Chandler, AZ. The resort was undergoing some significant renovations for their November 22 100th year anniversary celebrations.

Lola and Julie met one of the golfers at the resort and were both quite smitten. I think it was the size of his putter? Julie notes “Maybe this is Big Dick?” 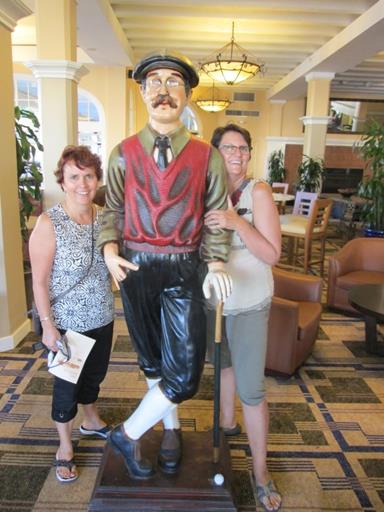 Being the farm girl she is, Lola (Kelly M.) wanted to ride the ostrich through the lobby but needed a leg up. Julie notes “Or is it an Emu? We never did get that ironed out. Either way we had to reign her in after several laps around the lobby. (The establishment frowned on her yelling ‘Hi Ho Ostrich, Away!’) But she’s a natural Emu/Ostrich jockey if that lab thing ever falls through.” 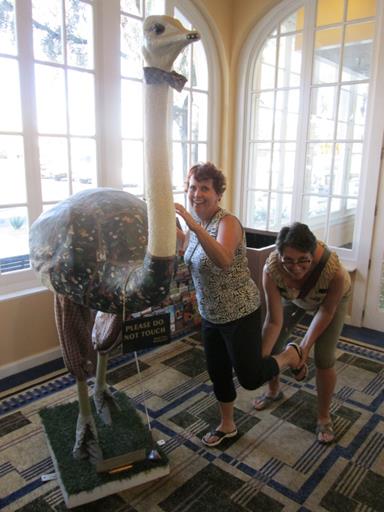 We wandered through a shopping area and discovered the SanTan Brewing Company where we stopped for some refreshments. 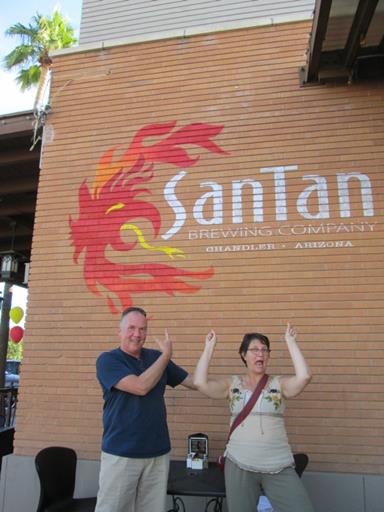 Julie notes “Beautiful shot of Lola (Kelly M.) but what is that woman behind her plotting?” 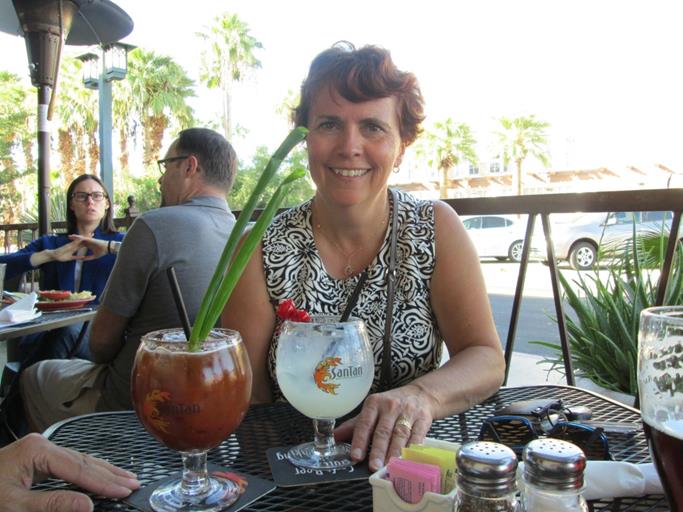 Julie notes “Yes I am camouflaged but again, check out that lady behind us. What is she planning? Doesn’t look good.” 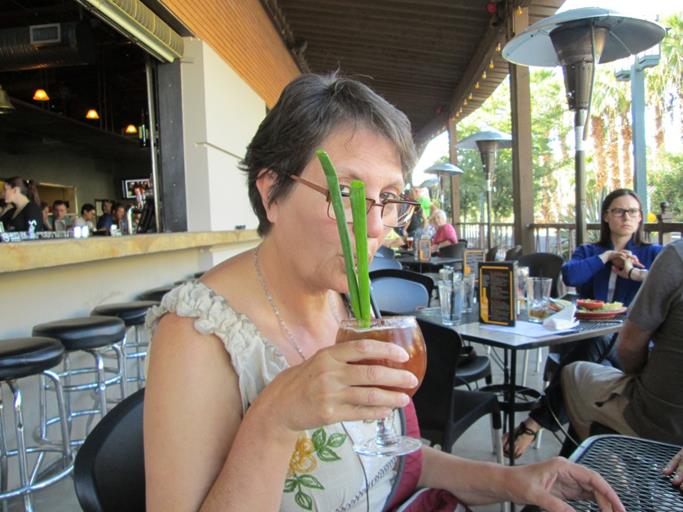 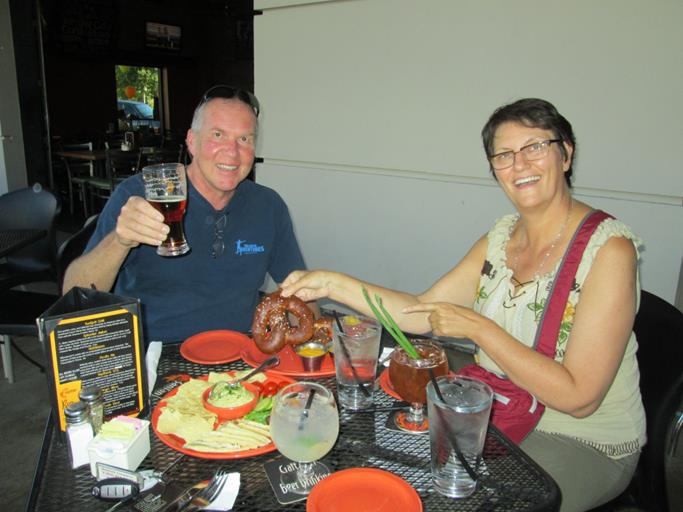 The old vault in the SanTan Brewing Company was a good chance for me to exact some revenge. Julie notes “The guy coming out of the men’s room to the right let me out again. He thought it was the money yelling ‘help, let me out!'” 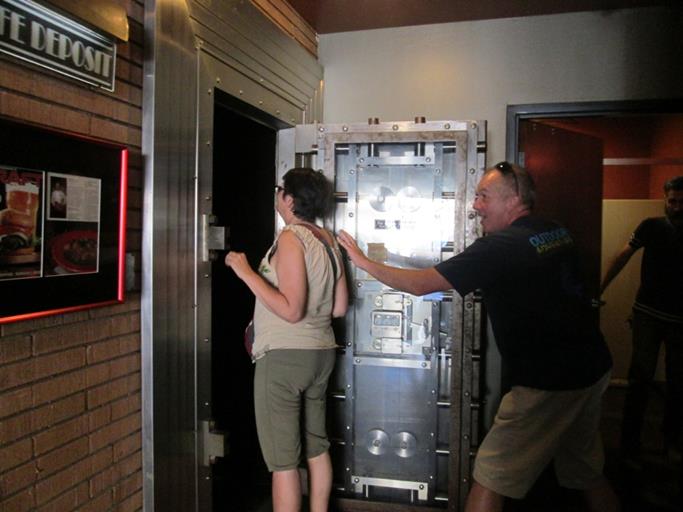 Thursday nights are Happy Hour nights at Encanterra. Harvey had booked a table for 20 people but we had about 24 in total. We had the chance to meet some other guests and members and enjoy some terrific food. 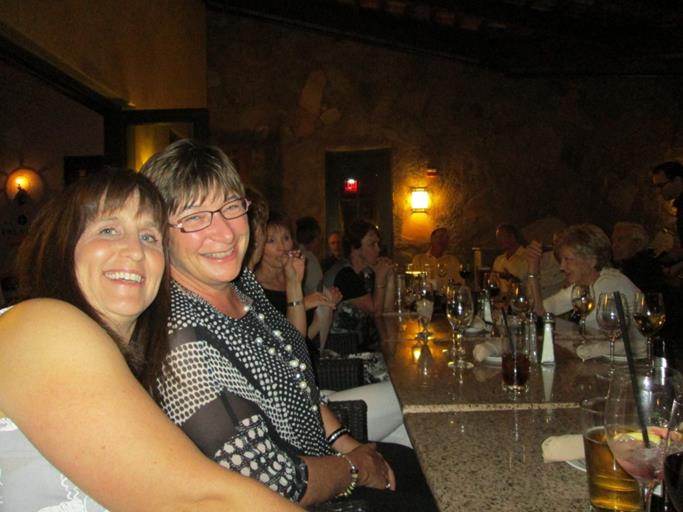 Julie notes “You can’t really see them at the left end of this table, but this was Dan and Brad’s second man date. Another success.” 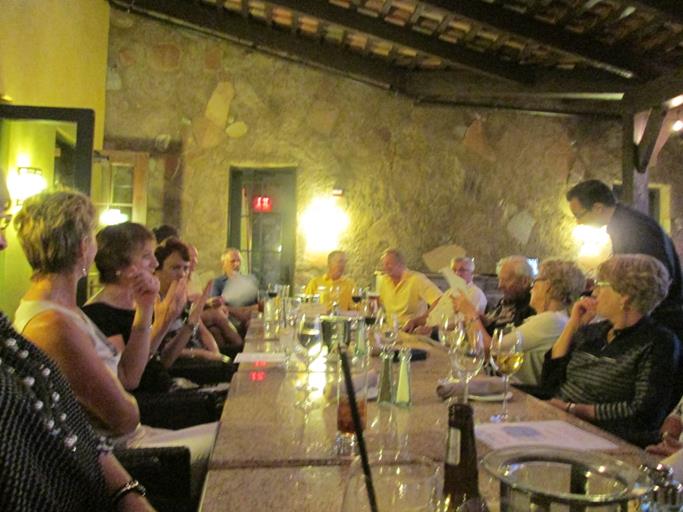 Harvey and Dale then invited everyone to their place for Harvey’s margaritas and some dessert. 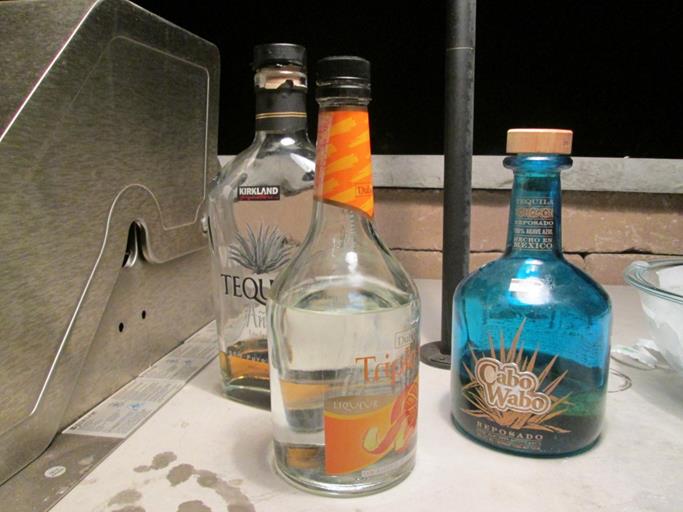 Both of the margarita makers; one human, one mechanical. Julie notes “Too many of these and you’ll be out dirty dancing with the cacti possibly with a full moon of any kind.” 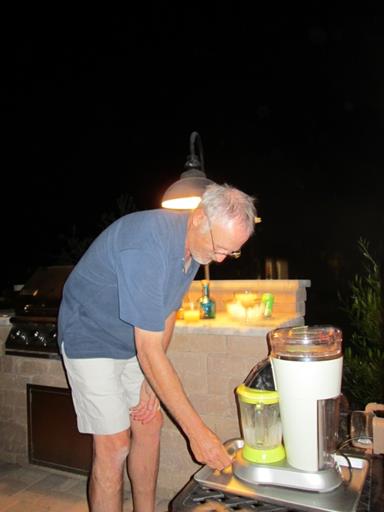 …another great day in paradise, over and out, the muleskinner and his sidekick

Julie notes “Kelly M.’s vacation update – Kelly you had your hands full today touring the Emonds around Phoenix but you have always enjoyed hopping in the vehicle and taking to the road. You were happy to pick up some more pants at Lucy’s for your lovely wife. Then you snagged another great outfit for the upcoming holidays. You are going to be turning some heads! You got to experience trying to walk and read history facts to Brad but you both realized what you really wanted to read was the beer menu at the SanTan brewery. Your wife was spa-ing today and as you already know, she has beautiful skin, certified today by the spa facialist. And now looks even younger. It will knock your size 5 socks off! Okay rest up. Tomorrow is another day.”