We left our $59.00 Travelodge in Grant’s, NM and continued our trek north and east towards Ontario, Canada. We drove about 588 kilometres today to Amarillo, TX following I-40 eastbound. Julie notes “$59.00 meant not quite a full tub of hot water and a hole in my towel and a frozen donut for breakfast but overall not too shabby. Well a little bit shabby but we’ve stayed at way worse. That’s one good thing about this trip is that we can always ‘well it’s not great but it wasn’t as bad as when Norm did this or said that.’ Everyone should have those kinds of comparison trips to let them know how lucky they are when the good stuff happens. If you don’t, feel free to borrow some of our stories.”

We are back in windmill country. Julie has happy fingers as the kilometres clicked away along with the camera shutter. This is the money shot. Julie notes “I think I earned my blades as Windmill Woman as I took about 175 pictures today, the majority of them different shots of windmills travelling at 70 miles per hour. So when I say different shots I mean blurry ones, crooked ones, ones with the truck aerials or rear view mirrors or Brad in them, ones a bit too late so no sign of the windmill in question at all, ones that weren’t even windmills but TV antennas or cell towers, but they just kept popping up all around us. He doesn’t mention that I passed by many that I just admired from a distance and took pictures of with brain. And I am grateful that my windmilling every few minutes yelling ‘there’s another one’ and swinging the camera around did not send us off road. We decided early on that opening the window for shots is no longer an option though. The breeze blowing those windmills is getting cooler as we head north east. We left Jim Bob o.g. (Off Guard) back in the camper, leisurely lying about with his batteries removed. We thought he’d enjoy some Phoenix downtime. ” 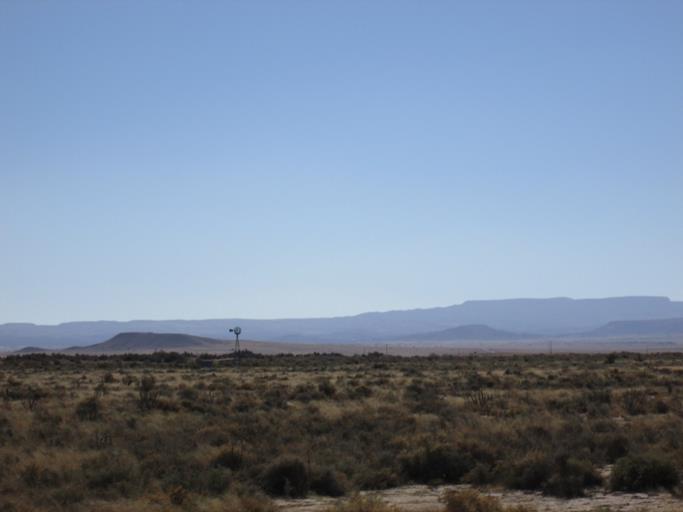 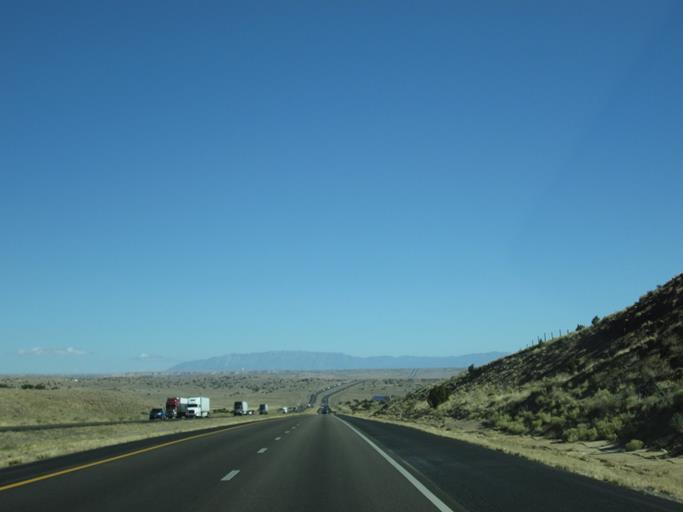 We checked into the Fairfield Inn & Suites in Amarillo, TX. The #1 of 66 Trip Advisor rated hotel. After we got checked in, we headed out to the Big Texan Steak Ranch for dinner. It is rated #24 of 415 restaurants but you have to go to the home of the free 72 oz. steak at least once! Julie notes “Back in Phoenix we had quite a shock to our system when we finally figured out how to get Bill and Mary Ann’s bathroom scale to work. Not good! Who would’ve thought eating big meals, drinking heavily, and sitting in a truck for hours a day would cause you to gain weight. There should be a warning on restaurant menus and truck doors about that kind of thing. So we pinky swore that we would eat nothing but salads for the rest of the trip. Hmmmm this does not look like a salad eating kind of place. We have now double pinky swore to start our salad bar tour tomorrow.”

The Wiener mobile on display outside the Big Texan. Julie notes “If you are not humming ‘I wish I was an Oscar Mayer wiener’ right now then there is something wrong with you.” 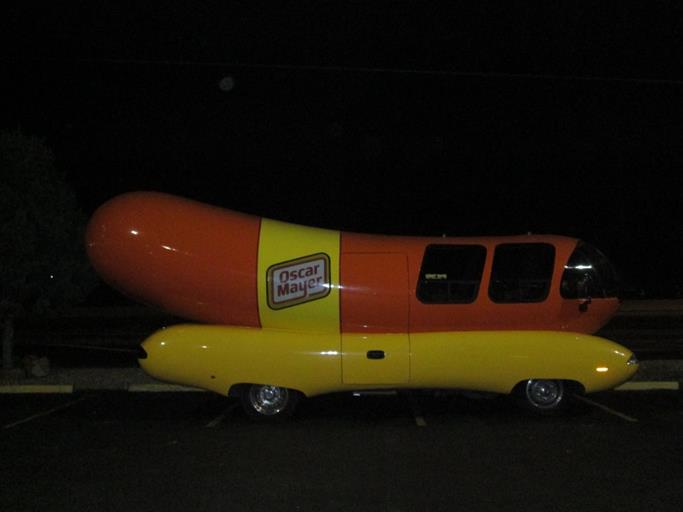 Julie really liked the place but only because they had a windmill. Kind of like a kid likes McDonalds because they have a playground. Julie notes “This is like a Windmill Woman award for taking the most windmill pictures in one day. I’d like to thank my family and the kids for getting me hooked on those pin-wheels when they were kids, my mom and dad for always telling me to go outside in the wind to get the stink blown off me, my husband for being the always inspiring Windmill Man, my camera for that slightly delayed click that allows me to get those off centered, ‘creative’ shots and everyone who has ever built or installed a windmill or admired a windmill.” 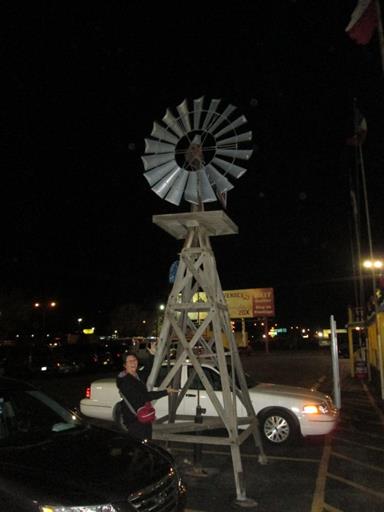 My excellent 12 oz. Big Texan Ribeye Fort Worth cut with blue cheese and sautéed mushrooms. We weren’t brave enough to try the “Mountain Oysters” appetizer. The menu says “If you think its seafood, go with the shrimp.” J 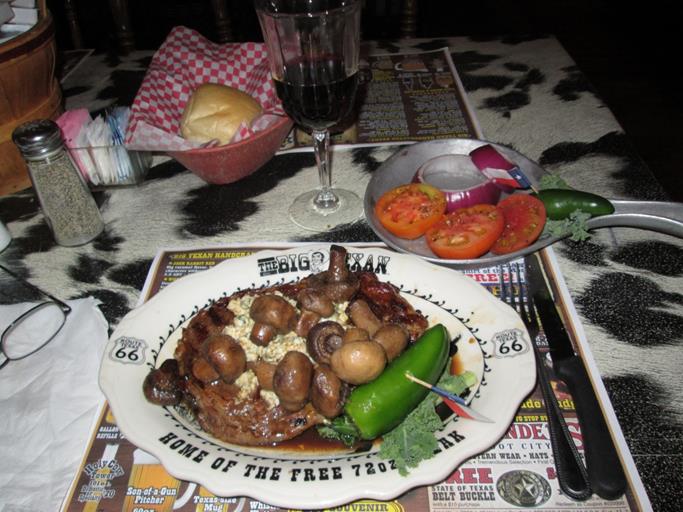 Julie ordered the steak tacos. This would be a fun place to go with a group. Julie notes “I know tacos again but they were delicious and almost like having a salad, right? They did had coleslaw and jalapenos in them and the decorative green pepper on the side should count as a veggie as well.” 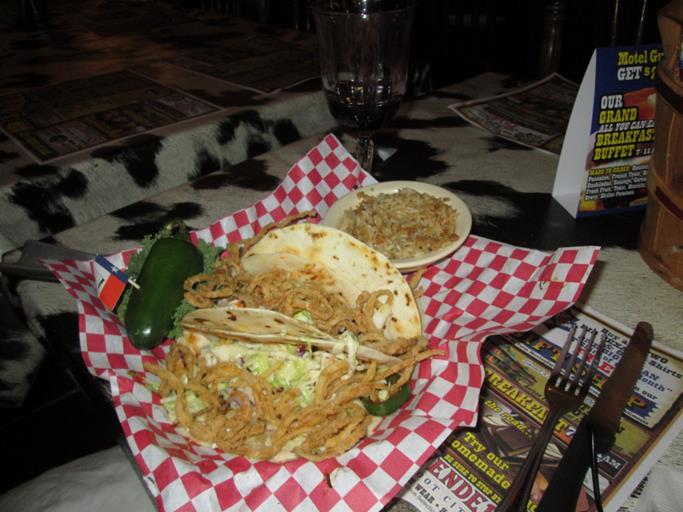 While we were there, a Pharmacy student at Texas Tech University Health Sciences Center, attempted the 72 oz. steak eating challenge as a fundraiser for the SnackPak 4 Kids charity. The challenge is to eat a 72 oz. steak along with a shrimp cocktail, roll with butter, and a baked potato in 1 hour. Seventy-two ounces is 4.5 pounds of meat or for younger metric Canucks that is 2.04 kg.

Oh yeah, Julie photo bombs the challenger. Julie notes “This is me trying to make my eyes big and smile at the same time. An almost impossible feat for us Holmes’.” 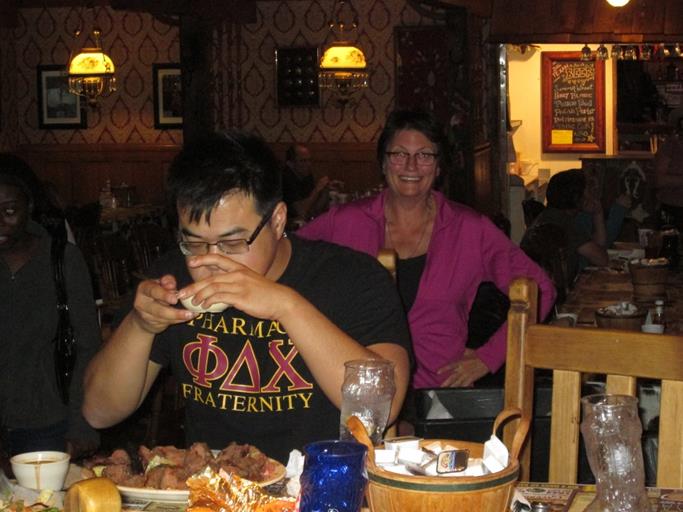 This kid, Gui, and his enthusiastic supporters were really inspiring. Julie and I added to their total fundraising after his 1 hour time limit was up and he hadn’t quite finished. They were a really great group of socially aware kids trying to improve someone’s life. Julie notes “Gui, was so close to getting the job done, but as the time ticks down to a few minutes you have to decide, can I actually complete this in that time frame and keep pushing hard? Or should I just slow down and try to avoid an even bigger stomach ache. Gui kept plugging along as the time ticked down.” 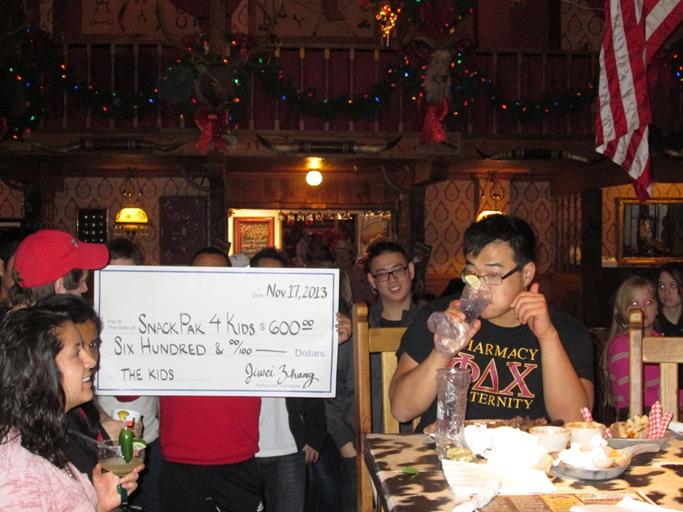 Julie notes “We are still missing the iPod. Where are you our old friend? We are worrying and keep checking the same pockets over and over again, coming up with lint, old Kleenexes and miscellaneous stuff we “borrowed” from the Smith’s house. The iPhone did play out John Denver’s ‘The mountains and Mary Ann are calling me again’ so we thought that probably meant we will be heading for the mountains soon and that Mary Ann was probably trying to call us to thank us for the ‘surprise’ we left at their Encanterra house. We also had a very funny moment when an old phone message played as part of the iTunes shuffle and it was Frank, the day before Brad’s retirement, phoning the city telling Brad he better shape up or he wouldn’t have job come the next Monday. That gave us a good laugh. Okay, the Windmill Woman better rest up. We may still be in Windmill Country tomorrow.”