We left the beautiful new hotel room in Amarillo and again headed north and east. We traveled I-40 to Oklahoma City and then I-44 through Tulsa, OK to the intersection of Oklahoma, Missouri, and Kansas. We stayed in the Downstream Casino & Resort which is in Oklahoma. We entered the resort in Missouri and parked the truck in Kansas. The best part is that Julie and I are “players” now so that we could get the large king room for $75/night which included a $40 coupon for dinner. The hotel is less than a year old and very nice. This was a great deal for us. The casino will be very disappointed in their new “players” because we never spent a nickel on the machines even though there was a $5.00 coupon to get you started. Julie notes “Despite now officially being ‘players’ I reminded Brad this did not mean he was automatically allowed to go the ‘Players Gentleman’s Club’ that we had passed yesterday. He just giggled. This was a very nice hotel room. Spacious and clean and new. The only thing missing was a bathtub. Try not to be too sad for me. I distracted myself by watching some funny older movies on the big, clear TV and thinking about salad for supper.”

The entrance, parking, and hotel & casino in 3 different states.

Today’s money shot out of 135 pictures. Most of them taken again at 70 mph on the Interstate. Julie notes “I really restrained myself today, honest. But they are so purdy.” 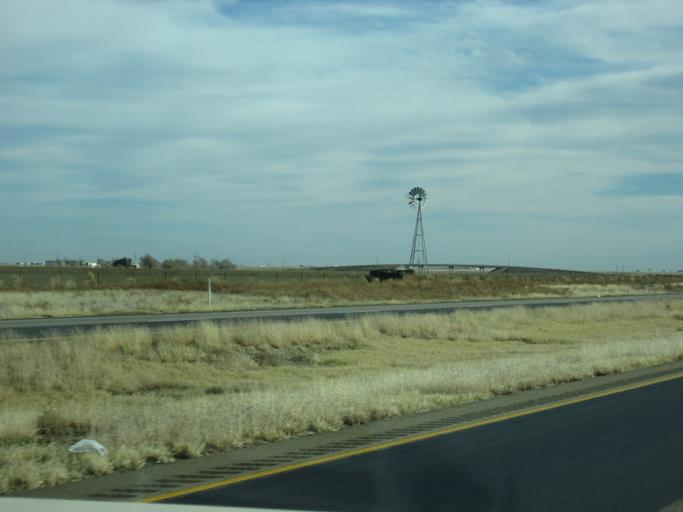 We passed the 19 story cross at Groom, TX. Do you think this might be the Bible Belt of the midwest? Julie notes “A very impressive sight for sure.” 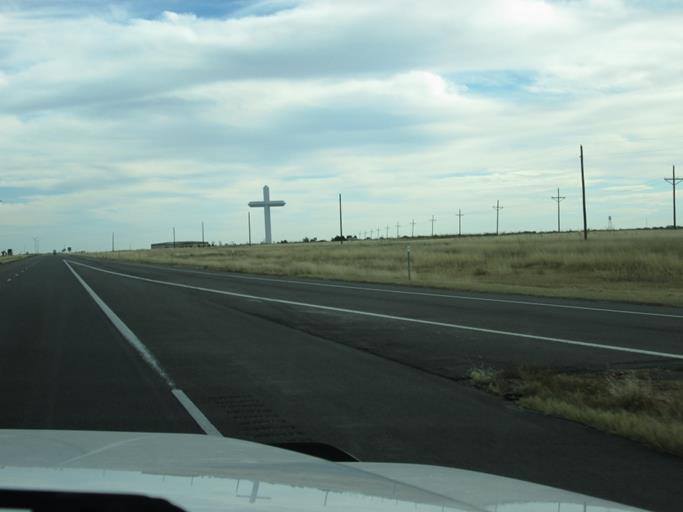 We also passed the leaning water tower a little further east on I-40. Julie notes “The Leaning Tower of Groom. I think I’ve read about that. But I thought it was in Italy near a Pizza Place or as they say in Italy, a Pisa Place.” 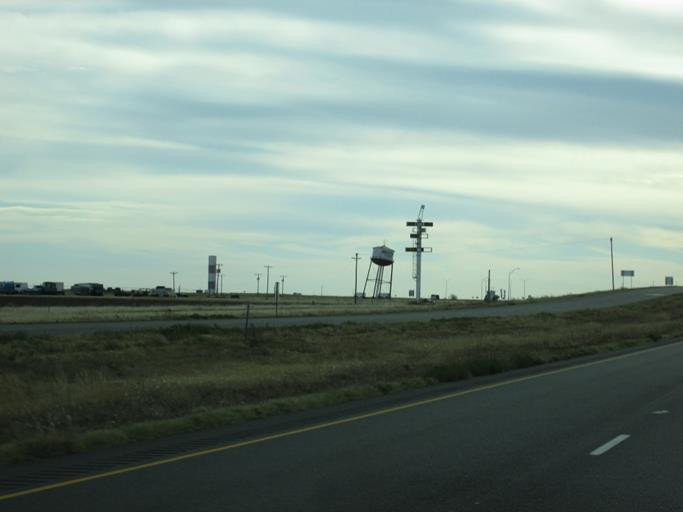 More windmills. This time they were generating electricity. Julie notes “This one is for my Dad who declared jokingly that he could reverse the rotation of the Wolf Island windmills by staring at them from his hospital bed when he was in the Kingston General Hospital last spring. And when he controlled them to turn the other way the power was actually drawn back out of the system and released back into the wind. He was a powerful guy!” 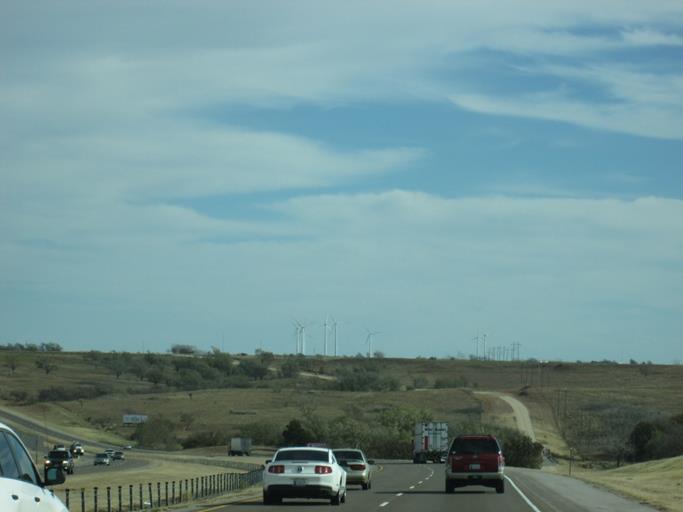 The muleskinner and his sidekick having a drink in the Downstream Casino & Resort. Julie notes “You can see all the sparkly machines with all their bells and whistles behind us, but we weren’t tempted. We were looking forward to free range on the Casino buffet, the salad portion only of course, as per our pinky swears. Notice how my Bloody Mary is mostly salad already. Tomato juice, celery, olives, lime. I can feel the weight just falling off of me as I drink this little garden delight.” 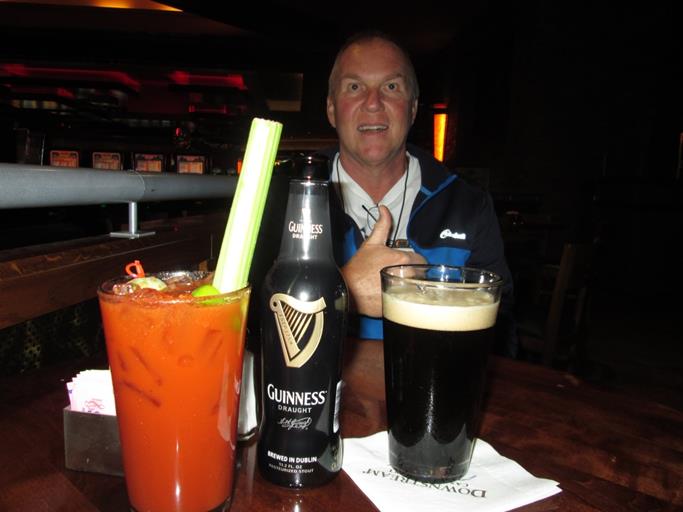 Today we promised ourselves that we would have a salad. Unfortunately, it was a salad bar and we both overloaded our plates. Not really sure this is any healthier than the Big Texan. Tomorrow, we promise to do better. Julie notes “We pinky swear! (again)” 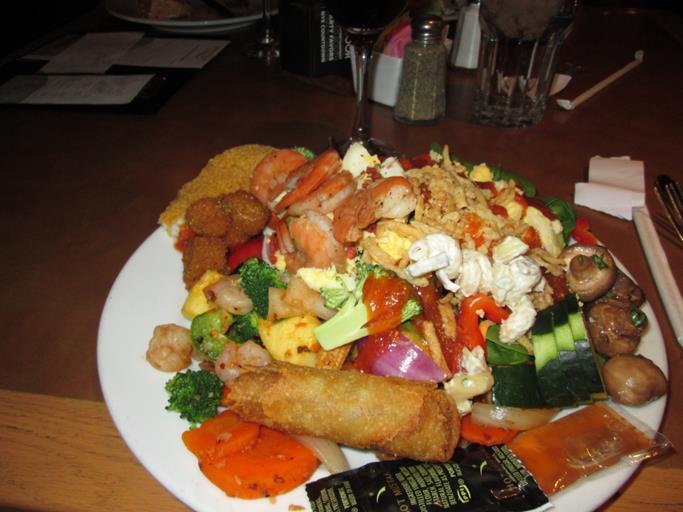 Julie notes “The lost is found!!!! And yes it was in the last place we looked. Go figure. Although we had looked in this place at least twice. The slippery little iPod was hiding right under our noses in the console where we always keep it. Maybe it just wanted a little break like Jim Bob o.g. (Oh Goodgriefpeople!). I think it felt bad for hiding on us as the tunes just flowed from it once it was plugged back into the system. It had even held its place in the shuffle countdown despite not being used for over a week and a half. Starting off with some Simon and Garfunkle, telling us ‘each town looks the same to me’ in ‘Homeward Bound’, ‘Monday, Monday so good to me’, the Mammas and the Pappas, four songs for Mom, ‘I’ll be seeing you’ by Vera Lynn and the song ‘Vera Lynn’ by Pink Floyd. John Denver declared ‘Thank God I’m a Country Boy’. We had just been reading about the bazaar table in Mom’s home town, dedicated to her crafts. Many of her items were for sale along with items made from her stash of material, created by the community ladies. The proceeds from this table were given to Mom’s favourite charity, Martha’s Table, a community outreach program. Our cousin Cindy also donated a beautiful quilt for a silent auction and money raised also went to the charity. Just after reading about this great honouring of Mom’s memory, Krista’s heartfelt recording of ‘Coat of Many Colours’ played appropriately. There were tears. For Susan, ‘Wake Up Little Suzie’ plus four Anne Murray songs played before noon.”

“Okay I know you are wanting a trivia question so here you go. What famous person’s home town was claimed as Yukon, OK in the Canadian River Valley? At least that is what it says on the water tower as you enter.”