We left our beautiful room at the Downstream Casino & Resort around noon and continued our cross country trek north easterly. Julie notes “We had the breakfast buffet at one of the restaurants in the casino. Very good but not salad. Traditional biscuits and gravy were among the many offerings but we had given that a try a couple mornings ago so weren’t tempted. It was tasty but there is no way to fool ourselves that that was anywhere close to being a diet food. Got a few blogs sent out finally. On top of being behind in our posts we were again having technical difficulties posting the ones we had ready due to our server connection. Sorry for the delays. We hope it didn’t cause anyone too much stress.”

We drove about 638 km and arrived in Effingham, IL in the dark. We had planned on trying some St Louis, Missouri famous BBQ for supper (even though we have pinky swore numerous times to only eat salads) but it was rush hour and dark and we decided we just wanted to drive through St Louis and find a hotel. We ended up driving another 100 miles (162 km) exactly before we found a place with a nice hotel and a BBQ joint. Unfortunately, the BBQ place was closed Mondays and Tuesdays. Julie found the #1 restaurant in Effingham, the Firefly Grill, on Trip Advisor. The place was packed on a Tuesday night and there was a 45 minute wait. We went back to the hotel and unpacked a bit and then headed back for our reservation time. We were both tired after long days in the truck and a little grumpy I would say. This led to a bit of a disagreement during supper and in our traditional style of fighting, much silence ensued. Even so, Julie really enjoyed her meal choice but mine was not great. Julie notes “Silence is golden… sometimes. And he was in a BBQ pout because I stopped him from buying BBQ at a place in Shepherd Hills for lunch. “We’ll get better BBQ at St. Louis for supper. (I say) Here have a granola bar.” Famous last words. Literally almost the last words we spoke for the rest of the night anyway.”

The view of our white truck (on the far right) in the Kansas parking lot from the 6th floor of our hotel in Oklahoma. 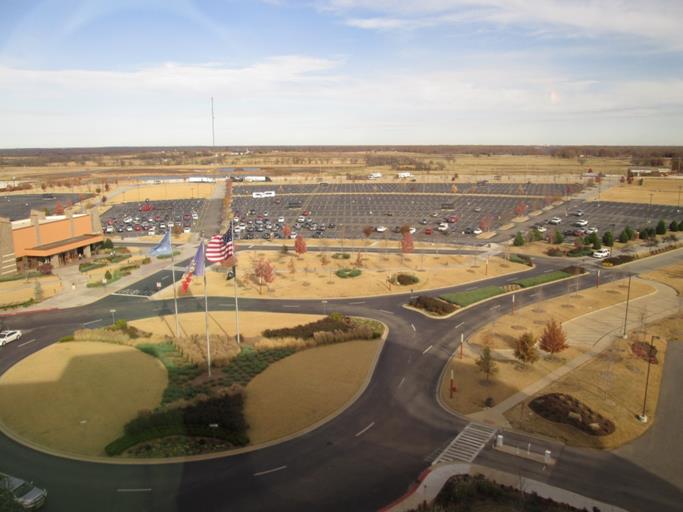 One section of the Downstream Casino and Resort in Oklahoma. 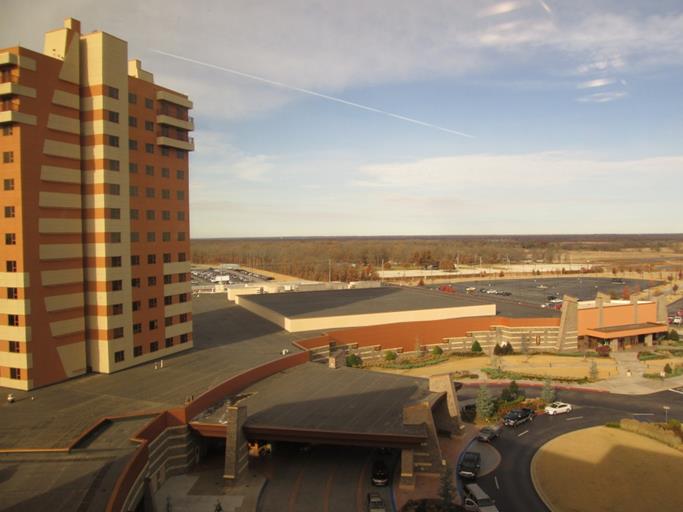 The scenery is beginning to change to hardwoods and rock cuts as we head into the East. Julie notes “This would’ve been glorious with fall colour a few weeks ago. There’s that timing issue again! oh well.” 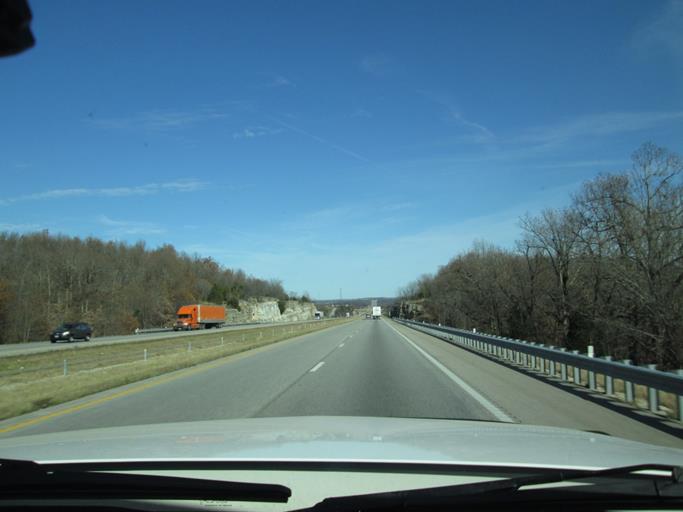 By the way, silos are the new windmills since windmills are getting fewer and farther apart. So here you go. 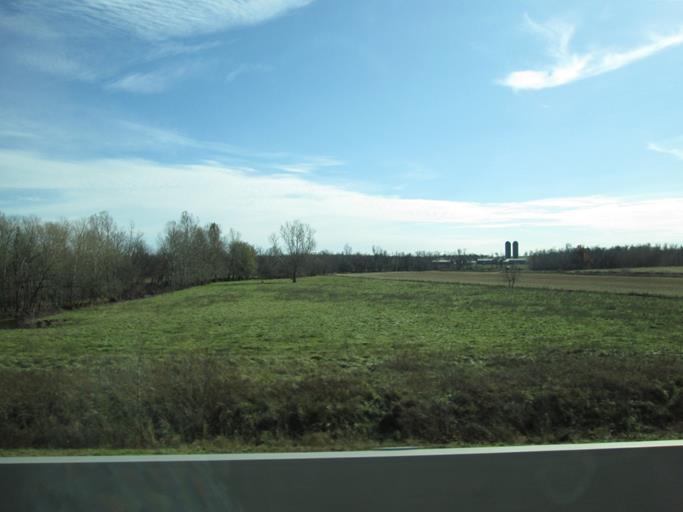 They love their billboards. I guess advertising must work. Julie notes “This is the land of the ‘World’s Largest… everything from toy museums, to wind chimes to golf tees to rocking chairs to gift stores as you see below. This makes us feel much smaller than we did in Central America where we were the giants. PS: We weren’t tempted to stop despite the free chocolate samples. Remember our pinky swear. (Plus that kid on the billboard looks pretty scary.)” 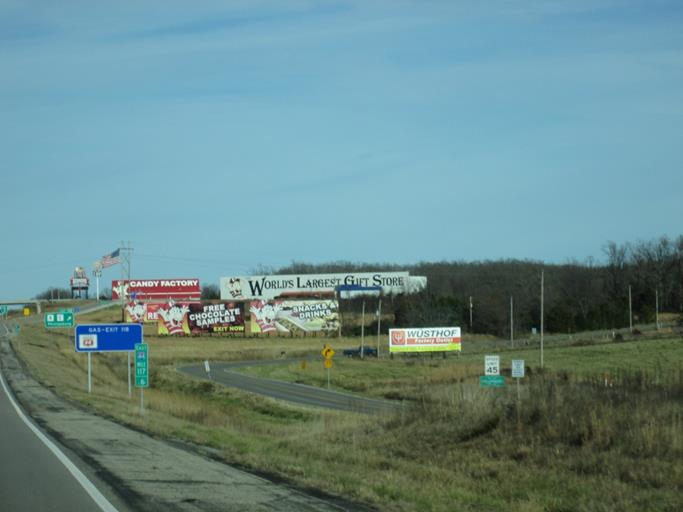 We stopped at the Shepherd Hills Factory Outlet (because of the billboards they had) to look around. Julie notes “Brad took a page out of the Kelly M. vacation book and decided to try out an outlet mall. I figured having a bowl just for walnuts was pretty highfaluting. Brad carefully explained that the bowls were made of walnut. I thought they’d be awfully small then, considering her size of the walnut shells. He again patiently explained that it was the pieces of walnut put together in a bowl shape. All sounded pretty nutty to me!” 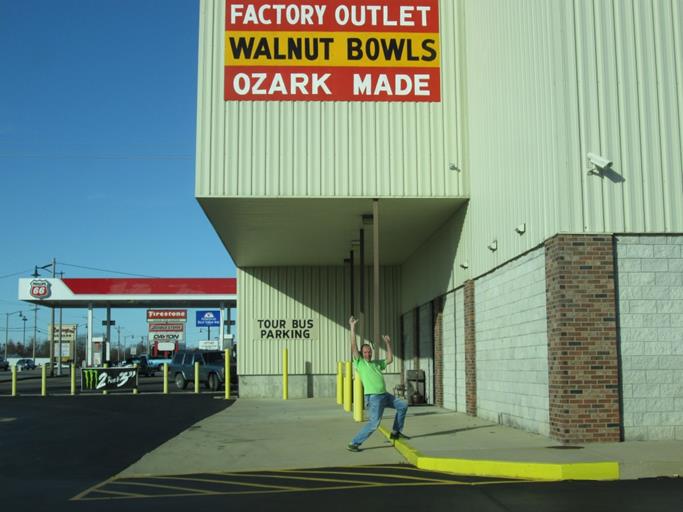 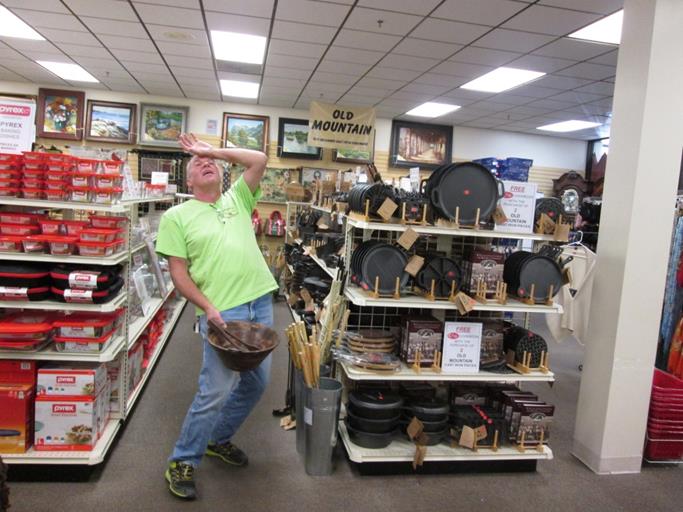 Julie ordered the grilled salmon, pureed squash, and Japanese pumpkin ravioli. Very good. Julie notes “Oh sooooo good. Yes Susan, I ordered squash on purpose. Not sure what a Japanese pumpkin looks like but let me tell you it tastes like a little bit of heaven.” 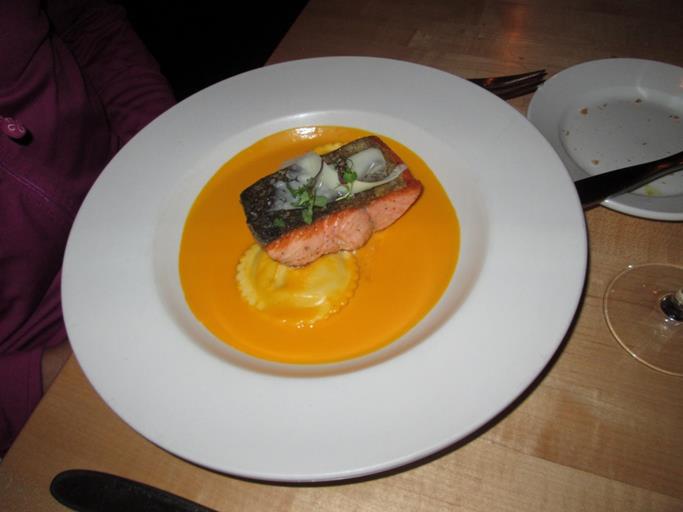 I had heard about the classic southern chicken and waffles dish many times but had never actually tried it. Once is enough. Just not my kind of cooking, I guess. I’m not a big fan of waffles to begin with and this combination is not one of my favourites, let’s say, even though it was very well prepared. Julie notes “And it wasn’t BBQ. And I kind of encouraged him to try this, along with our server. Who was very good at her job.” 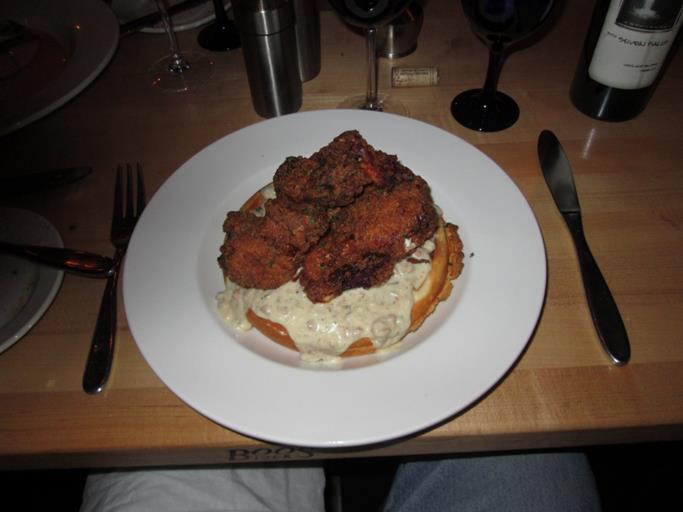 …over and out, the muleskinner and his sidekick (still not speaking to each other)

Julie notes “The return of the iPod blessed us with four songs about my friends Linda and at least four songs that made us think of Dad. A good day all in all (except for the BBQ debacle of course).”