We awoke this morning to quite a bit of fresh snow. Carol insisted on making us some French toast for breakfast. We didn’t argue with that! They both made us some ham sandwiches for the road. Brian had already made us coffee before he had to leave for the day. We visited a bit over breakfast watching the deer feeding in their backyard, said our goodbyes, and headed west.

Our beautiful full-service guest room compliments of Brian and Carol. Julie notes “The iTunes started us off with CCR’s ‘Bad Moon Rising’, singing those famous misheard lines… ‘There’s … a bathroom on the right.’ Similar to what Brian told us before we bedded down in this wonderful B and B.” 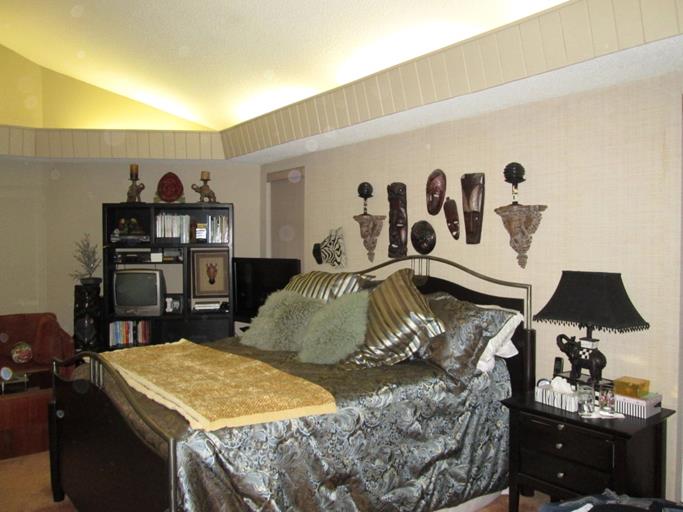 The deer feeding in Brian and Carol’s backyard. Julie notes “The one was eyeing up my French Toast I think.” 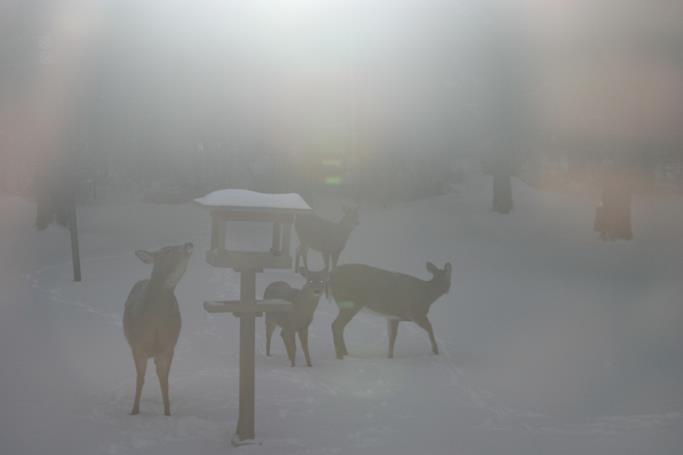 It had stopped snowing for the most part but the snowplows were still out clearing the highways. Julie notes “Willie Nelson was telling us we were ‘On the road again’ but it was slow going for a while.” 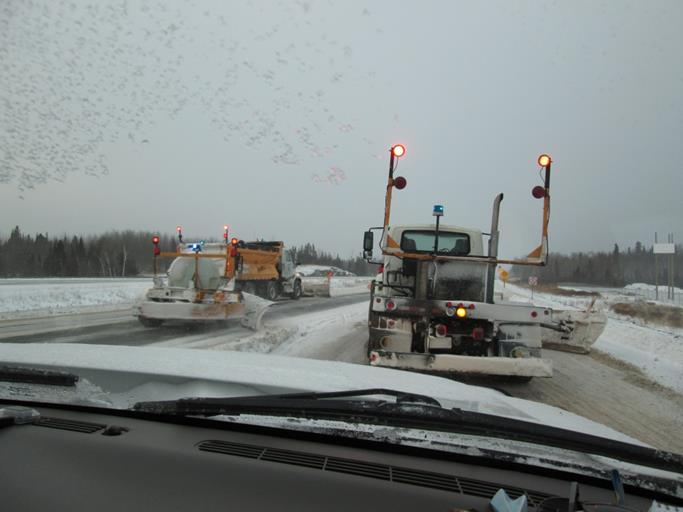 It cleared up but the highways were snow covered and slippery. Julie notes “The answer to Bruce Cockburn’s question today ‘if a tree falls in a forest, does anybody hear?’ is ‘ummmm sorry, I’ve got the iTunes blasting so I’m not really sure. But we sure did see a lot of trees!” 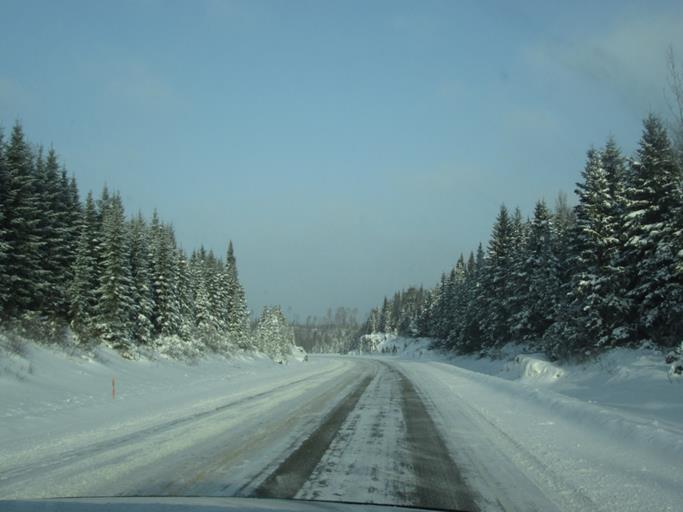 Julie’s on to old churches today due to the lack of windmills. Julie notes “and lack of silos as well.” 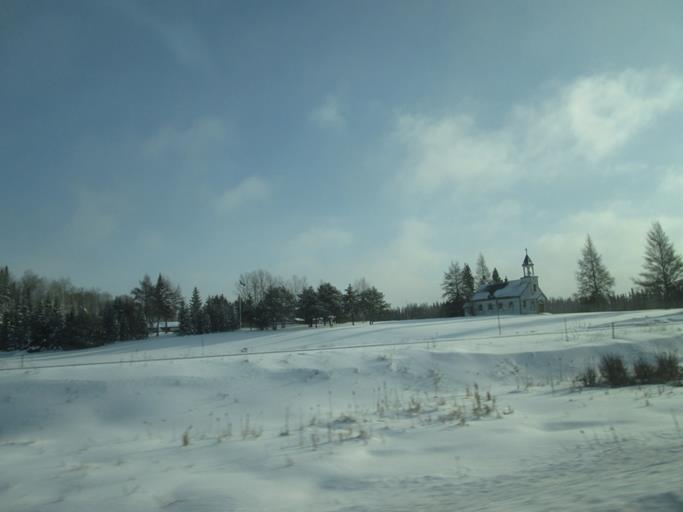 One of our traditional stops, thanks to Quentin and Kelly, is the Shell Station and restaurant in Upsala for fresh homemade butter tarts. I picked up half a dozen tarts to keep us going for the next couple of days. This is where we realized we had forgotten the ham sandwiches in the Thunder Bay fridge. I guess Brian and Carol will have a lunch waiting for them. Julie notes “We were sure missing those sandwiches as we arrived at the Tim Horton’s in Dryden, my Mom’s birthplace. (Dryden, not the Tim Hortons.) I sure hope Grandma Clara wasn’t in labour waiting for Mom to be born as long as we waited for food at that Timmies! Our timing was perfect as we arrived right behind a bus load of hungry and noisy girl hockey players and parents on their way from Winnipeg to Thunder Bay. And the customer service was strained to say the least. But the soup and sandwiches hit the spot and we were happy we were travelling in the opposite direction of the team bus.” 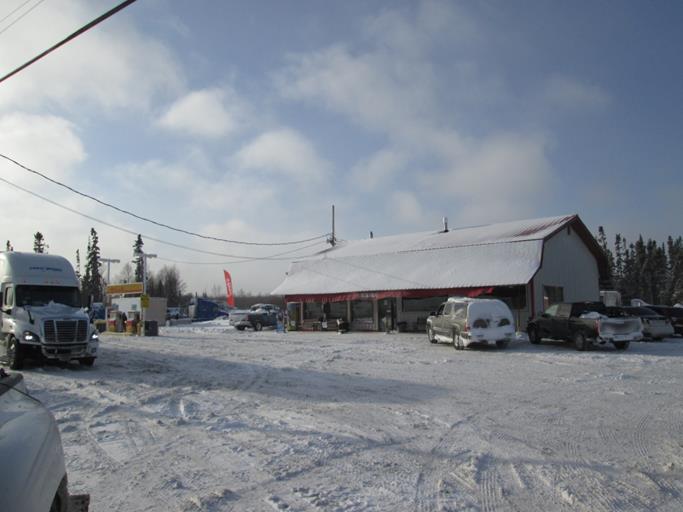 These butter tarts are homemade and delicious. I know Quentin and Kelly are jealous, for sure. Julie notes “Oh I knew for a fact that they were as I texted them tantalizing pictures, just to make sure.” 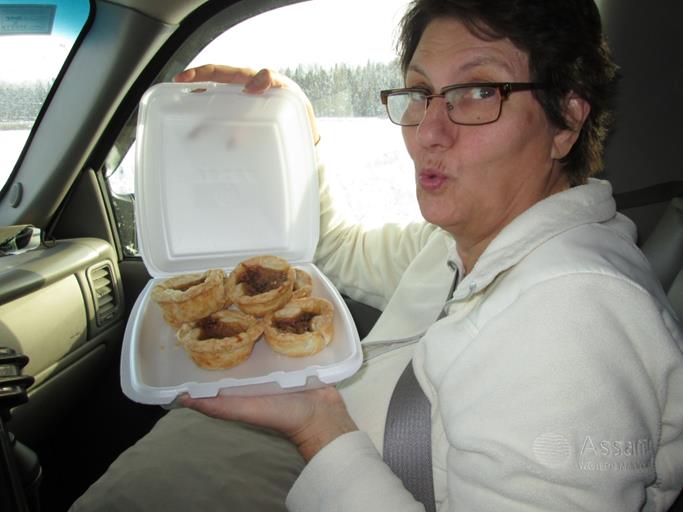 This was one of four or five semi’s in the ditch along the Trans-Canada highway. 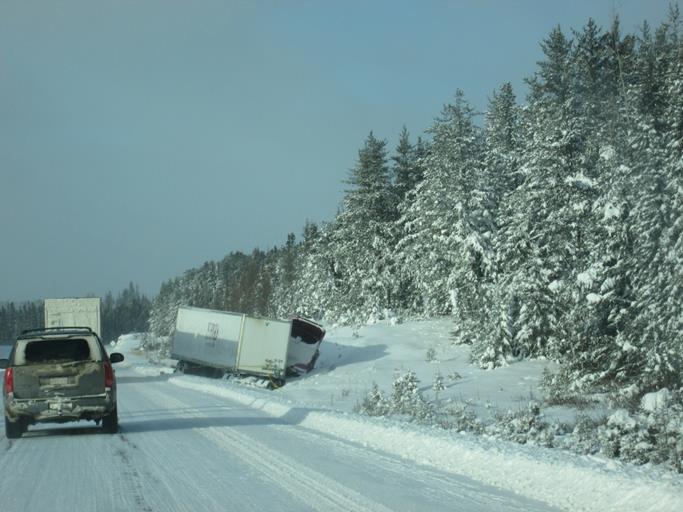 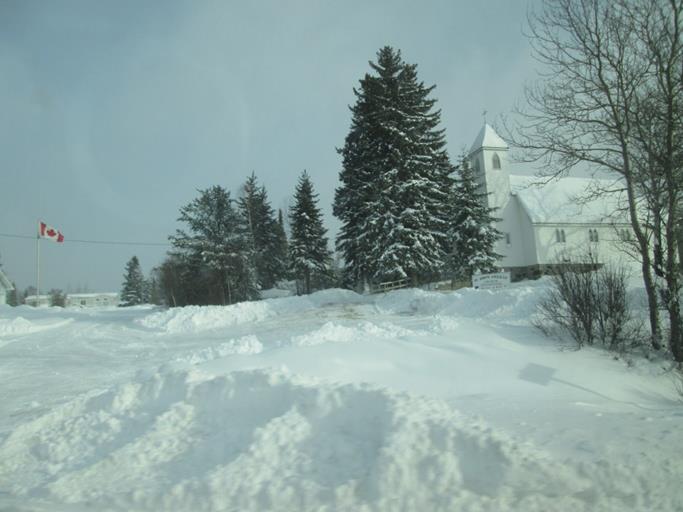 I told you she was in windmill withdrawal and filling the void with old churches. Julie notes “I am thinking the semi drivers were also taking note of the churches and thanking whomever or their lucky stars, if they made it out of those situations unscathed. Plus, aren’t they purdy?” 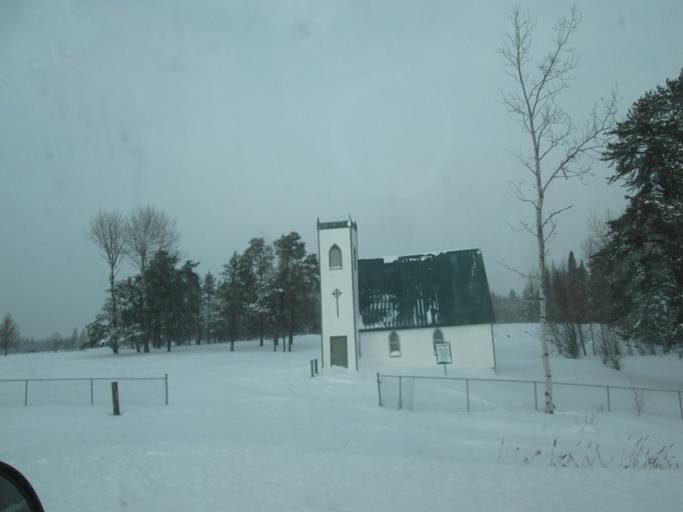 Another semi in the ditch. 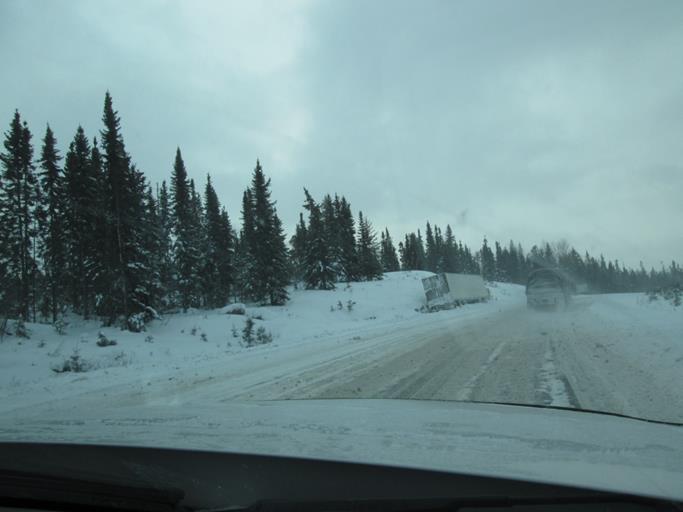 We made it to Russell, MB. A big drive for us today of 1023 kilometres, especially considering the road conditions. We booked in to the Russell Inn and went for dinner at the hotel restaurant. They upgraded us to a deluxe suite for the same price as a regular room. The hotel room was very nice and under $100/night. Julie notes “The TV ‘fireplace’ was crackly away when we entered our very large, renovated room. A nice touch and with a tweak of the thermostat we were as cozy as the fireplace hinted at.” 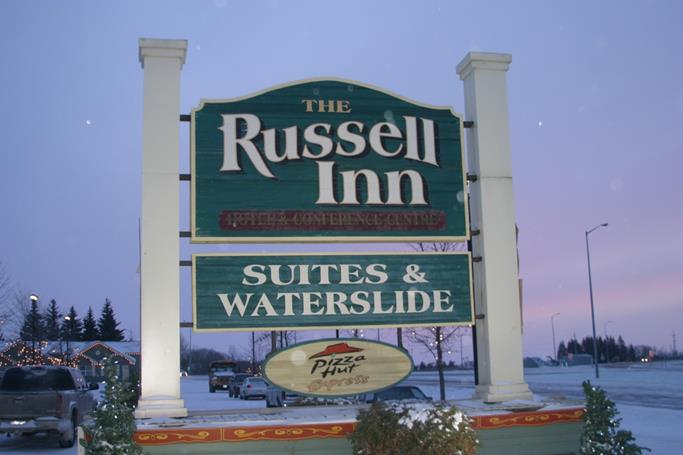 I had a nice beer and Julie had a glass of red wine. 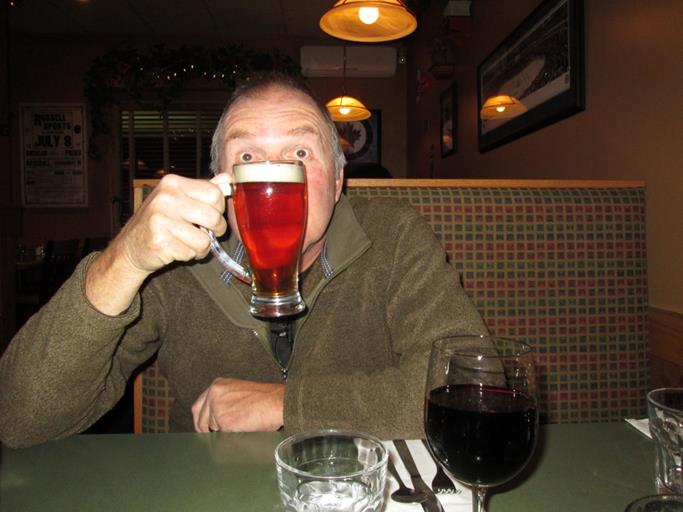 Julie had the seafood salad… 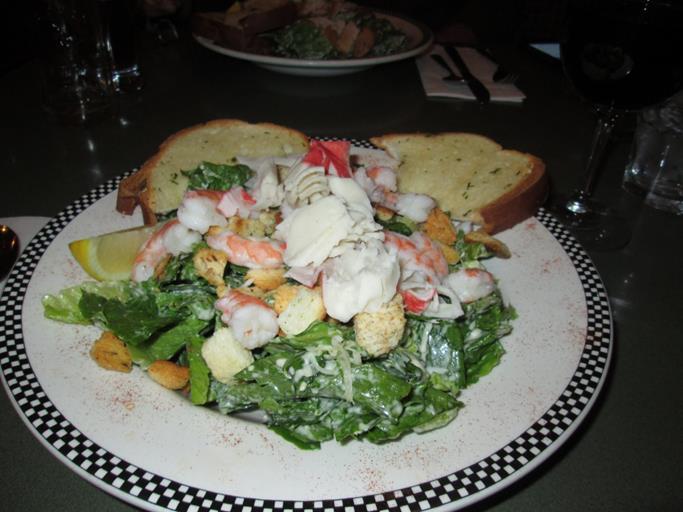 …and I had the Cajun chicken Caesar salad. It was a little disappointing. It is pre-packaged plain chicken with a side of salsa. Not sure how that qualifies as Cajun? Anyways, we kept our promise to ourselves that we would both have a salad for dinner. J Julie notes “Rule #162 ‘How far away from Cajun country is Russell, Manitoba?’ Well that is really a question but you know what I’m saying. Of course you will likely ask me ‘How far from any fresh seafood is Russell, Manitoba?’ but there is not too much you can do to ruin Pollock and I happen to like it. The real bonus was that we did not have to go outside to return to our cozy room with the TV fire burning, albeit a bit of maze to get back there. Thank goodness for my keen sense of direction.” 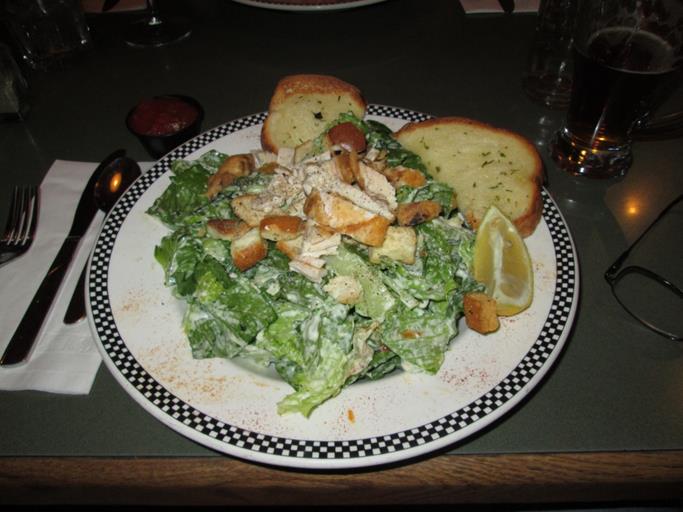 Julie notes “Trivia time! What is the name of the medal winning Olympian who calls Russell, Manitoba their home town? What medal did they win for what sport?”