Today, we left Russell, MB, at sunrise, in the bitter cold and headed to Edmonton to our granddaughter’s house. We fueled up the truck at the Russell Esso and fueled up ourselves at the Tim Horton’s right next door. It was very cold with the wind chill. The temperature was -31C but with the wind, it felt much colder. Julie notes “Brrrrrrr! I was sure while we were sitting on an asphalt parking lot in the Central America’s heat and humidity that I would never wish for a hot weather holiday again, but now I’m having second thoughts.”

Russell is a full service small town in Manitoba close to the Saskatchewan border. We have stopped here many times on our travels across Canada. All of the highway services appear to be very well maintained and well run. I guess that is why they appear to be successful. Julie notes “Yes we like Russell. And both Suze and Danny were correct with their answers to our question yesterday. It is the enthusiastic gold medalist for skeleton, Jon Montgomery, who calls Russell his home. He was the very likeable fellow who wandered around the Olympic village carrying a pitcher of beer, after his gold medal win at the Vancouver Olympics.” 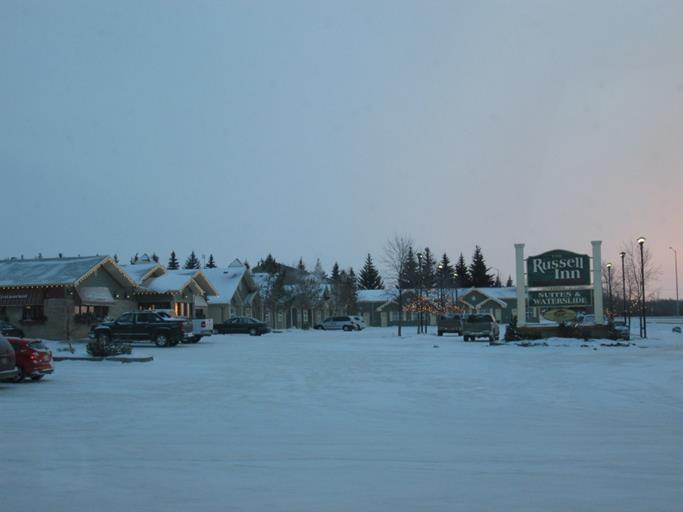 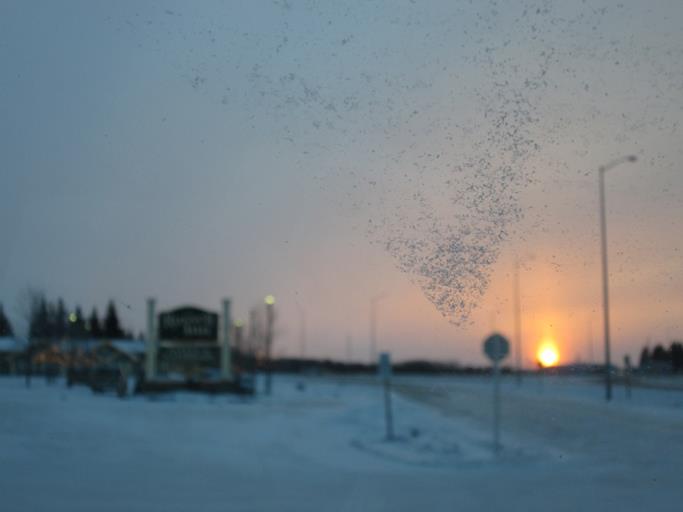 We crossed into Saskatchewan and continued following Highway 16, the Yellowhead, towards Edmonton. Julie notes “Here is a shot for you Suze, one of many grain elevators seen along the way (or as Susan calls them ‘cement factories’). 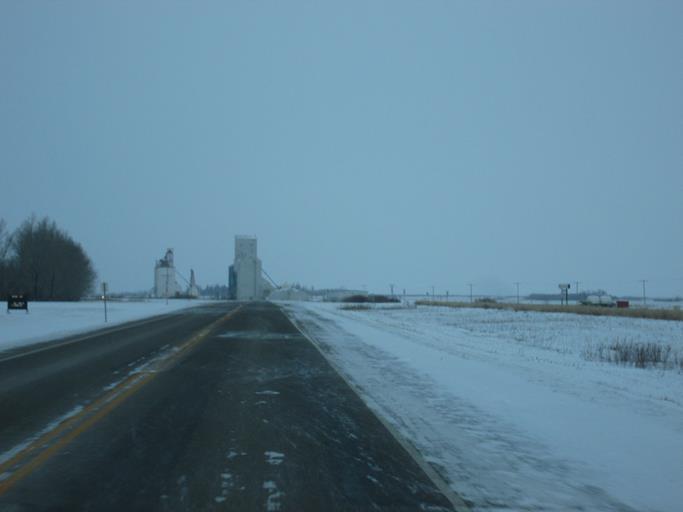 The road was pretty good compared to the previous few days. It was mostly bare, with some blowing snow. Julie notes “The iTunes reminded us that we were ‘going on a sentimental jour-ur-ney home’.” 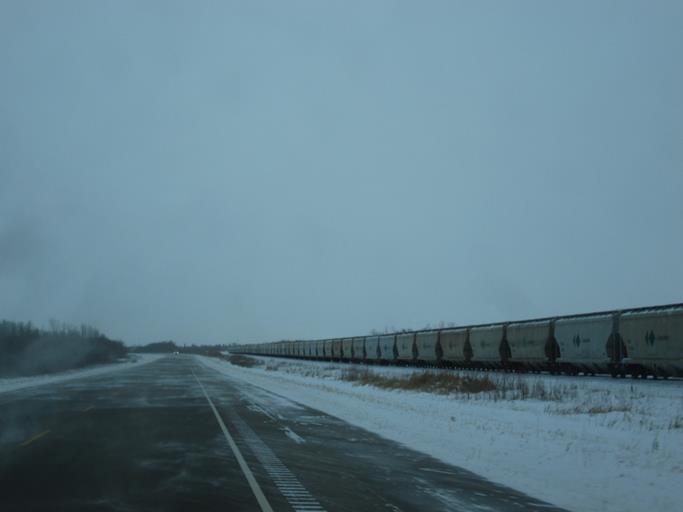 We passed many typical prairie farms. Julie notes “We almost ended the trip in Foam Lake, SK, with its town motto ‘Best Place In The World To Live.’ Why would anyone go any further? But we could almost smell Melodie’s feet from here so we kept on truckin’.” 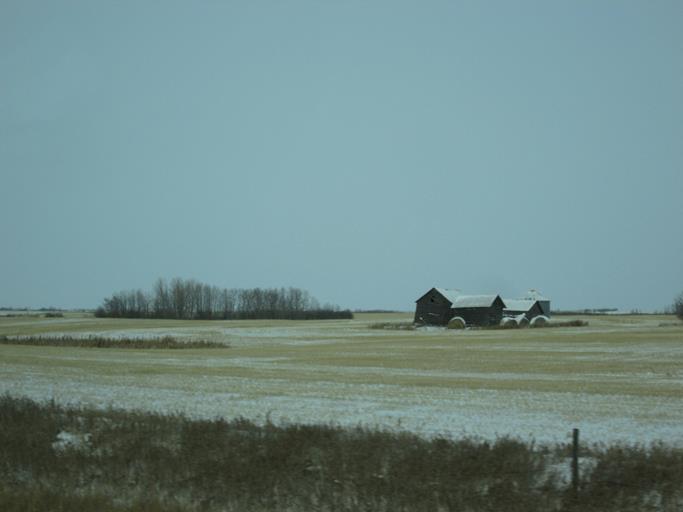 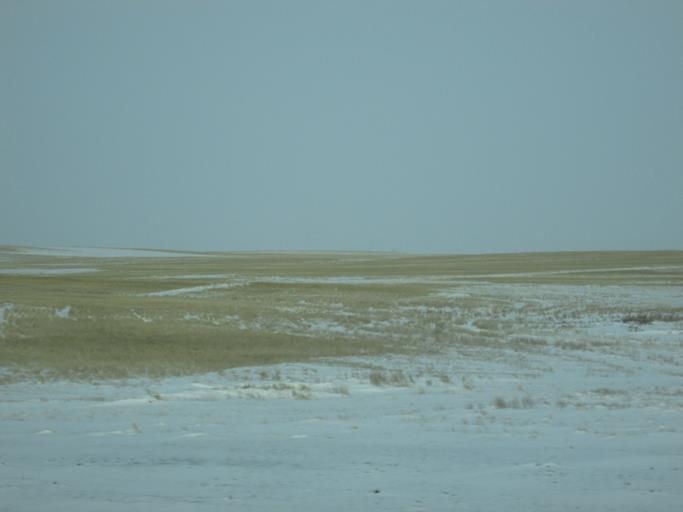 We crossed into our home province of Alberta in the City of Lloydminster. The orange monuments mark the border in the middle of the city. Julie notes “Sunny Alberta welcomed us with open blue skies. I did not get out and kiss the border monuments however as I did not have a cup of warm water to release my lips and tongue from the steel. But it felt good to know we were almost home.” 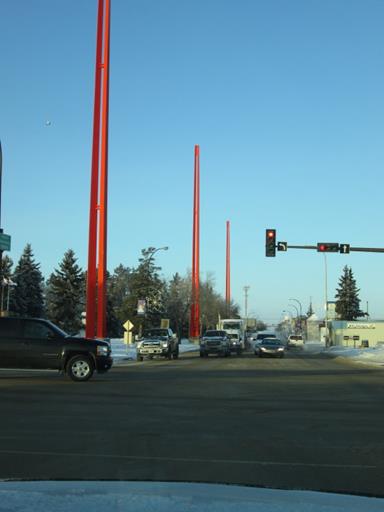 The days are short and the sun was setting as we traveled through Alberta. 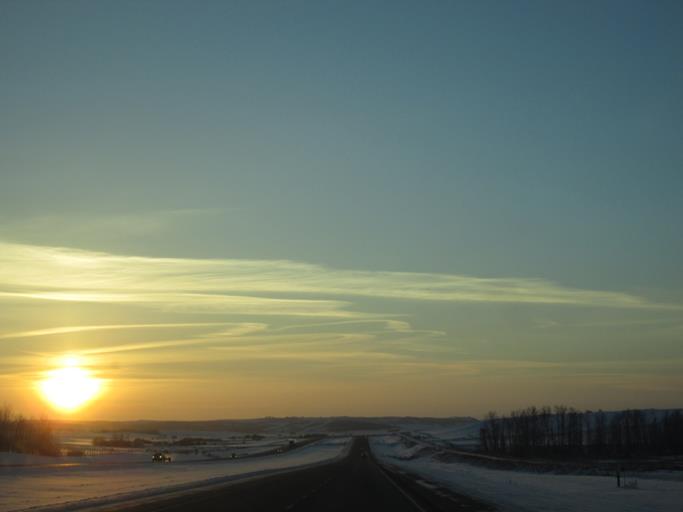 The temperature stayed at a cold -31C pretty much all day. 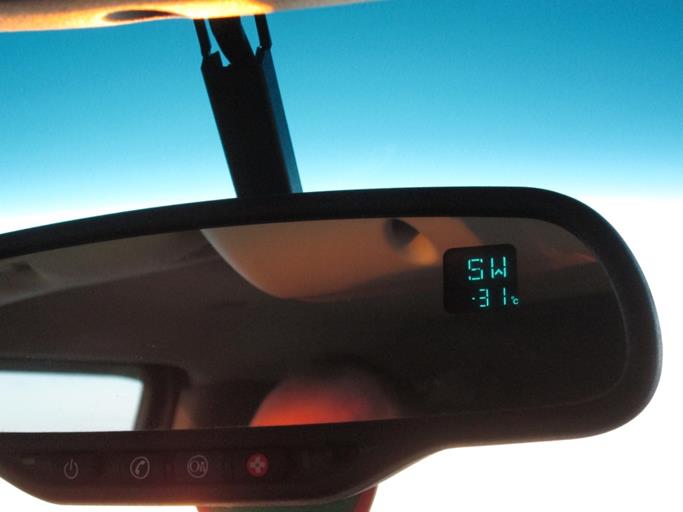 But we arrived in Edmonton to a very warm welcome. We traveled about 975 kilometres today and arrived at Jordan and Alison and Melodie’s new place just in time for supper. Julie notes “We hit Edmonton right at rush hour with the iTunes singing ‘Slow down, you move too fast’ as we crawled along the Anthony Henday Drive.”

We hadn’t seen their new condo. They gave us a tour and also made us a delicious lasagna and salad and even provided me with a few craft beers. It is really good to be back with family and especially see the changes in our beautiful granddaughter. Oh yeah, it was nice to see Jordan and Alison too.J

Julie notes “‘How sweet it is!”, as Jackie Gleason used to say. Here Melodie is cuddled up with her Grandma Vera blanket and silk piggies. Speaking of Mom, on our journey today Krista’s version of ‘Coat of many colours’ that she recorded for Mom’s funeral played. Which reminded me of cousin Carol’s words of praise for your CD Krista. Aunt Doreen brought the CD over for her daughter, Carol to listen to, which she did over and over again. She played it for her friend and the friend said ‘Oh nice, that’s KD Lang.’ And Carol said ‘No that’s my amazing cousin Krista!’ And her friend said ‘Well I think I like that better than KD Lang’s version.’ So there you go. And we love it too. Also Adam’s piano recording of ‘Imagine’ played and Brad said ‘That was Adam? That was good!'” 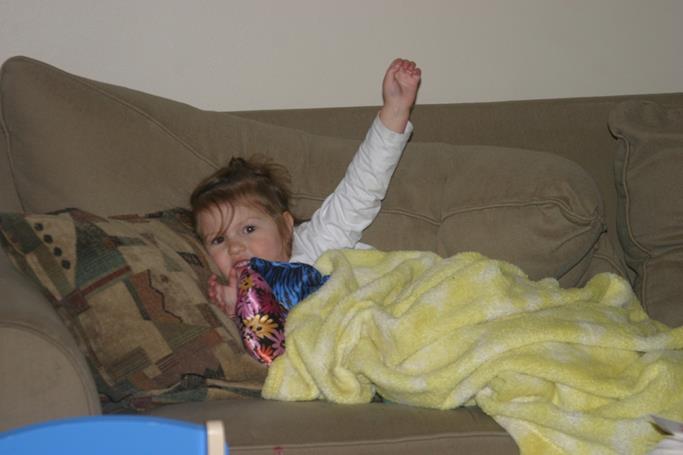 Julie notes “So here we are basking in the attention of our 2 ½ year old granddaughter, who warmed right up to us again after so many days of grandma and grandpa being away. She had promised a few days ago on the phone to cook us meat when we came for supper and there was meat in the lasagna so she kept promise. Jordan and Alison have settled in nicely into their new home, routine and being together this year, instead of 500 kilometres apart. This is exam time though so we are looking forward to keeping Melodie busy the next couple days while they study and write papers. Feels good to be back.”