We packed up this morning in Calgary and got ready to head south. Jaime’s friends Terri-Lynn and Jay have an almost 2 year old son, Fin. He loves big trucks. Before we could leave he needed a turn behind the wheel in the big-arse dually diesel Chevy. J He loved the truck, wheels & tires, and camper almost as much as I do. Julie notes “Fin used to be a well-rounded little tyke who danced with his Auntie Jaime and fed babies, raced cars and tweeted with the birds. I am afraid we may have spoiled that with ‘the big truck’. His eyes were like saucers and grin as broad as can be. Just like when Brad looks at me, if I am standing in front of the dually. Brad was sure tickled to have such a big, little fan. We highly recommend that camping spot. Showers are top rate, coffee plentiful and the hosts very friendly. They give away free homemade ketchup and hugs to their guests.” 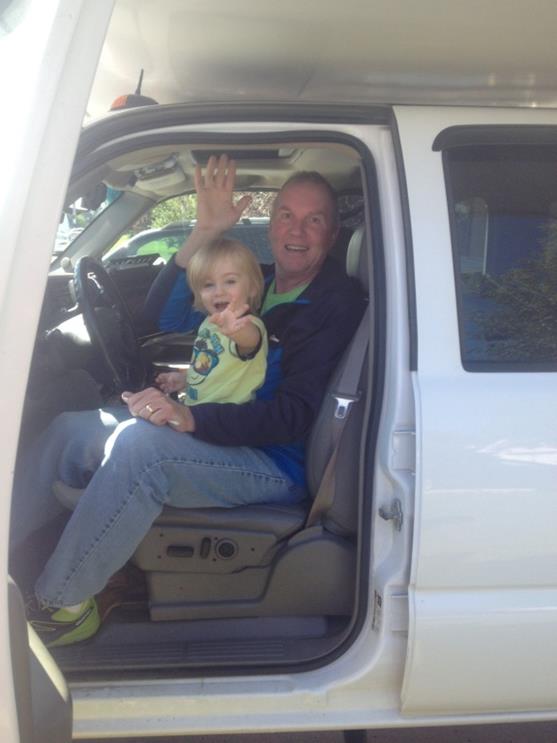 Once we convinced Fin he would have to stay in Calgary with his parents, we headed out on the open highway towards the US border. 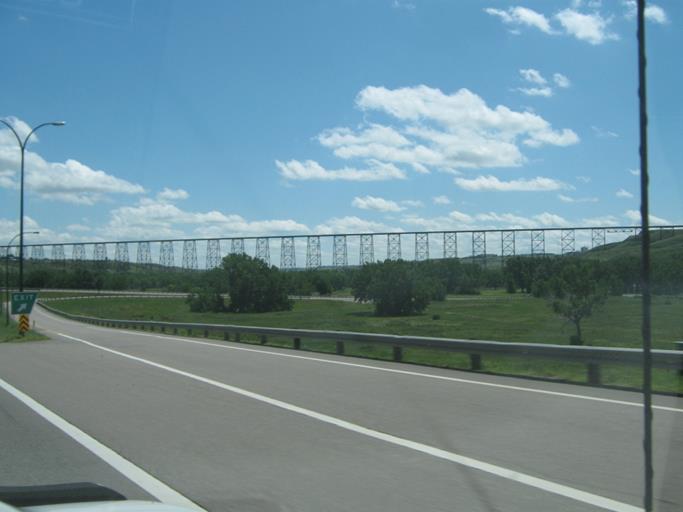 A large trestle in Lethbridge, AB

Julie notes “We also saw a restaurant and liquor store in a ‘revamped’ forestry teepee burner and a Ric’s Grill in a ‘refurbished’ water tower. But we ate supper in our ‘resealed’ truck camper. Brad redid the roof before leaving and that is good because we have had a lot of rain. Thank you Brad.” 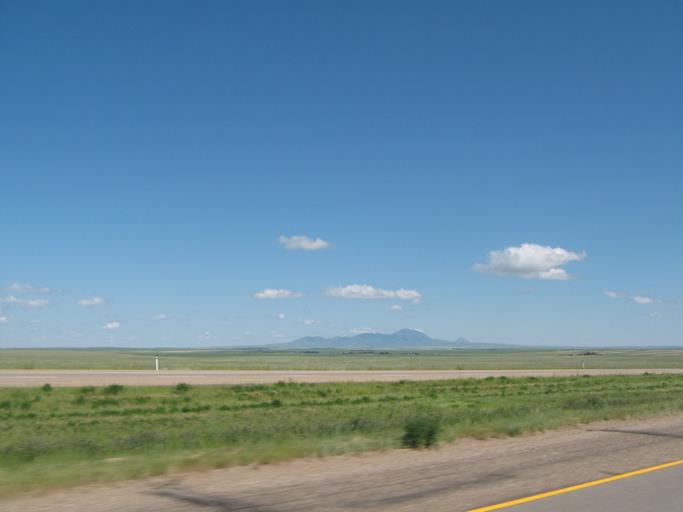 The Sweetgrass hills of Montana in the distance.

Crossing the border into the US at Coutts, MT. They had the drug sniffing dog on patrol today circling each vehicle as it passed through US Customs. The van ahead of us was asked to pull over for further investigation. We sailed on through as good innocent Canadian citizens. Julie notes “All I can say is thank goodness the dog wasn’t craving Uncle Herb’s famous popcorn as I may have had that scent on my breath, and my fingers and where I wiped my fingers on my pant legs. We were all ready to declare everything right down to the last slice of cucumber in our fridge but we looked too boring I guess and he sent us on.” 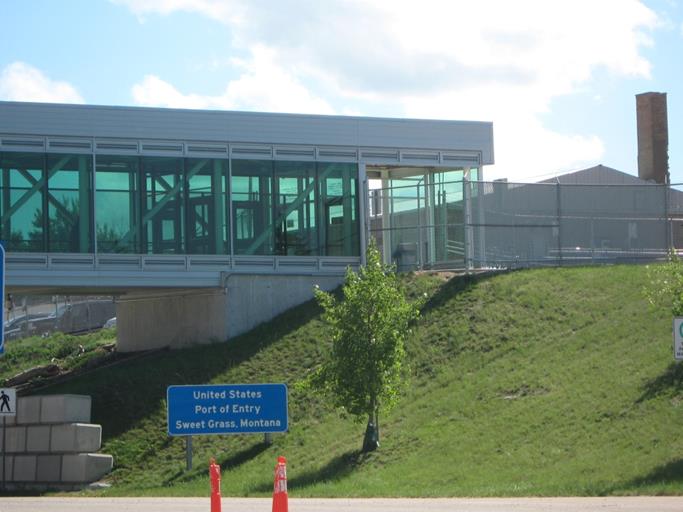 Crossing the border into the US at Coutts, MT. 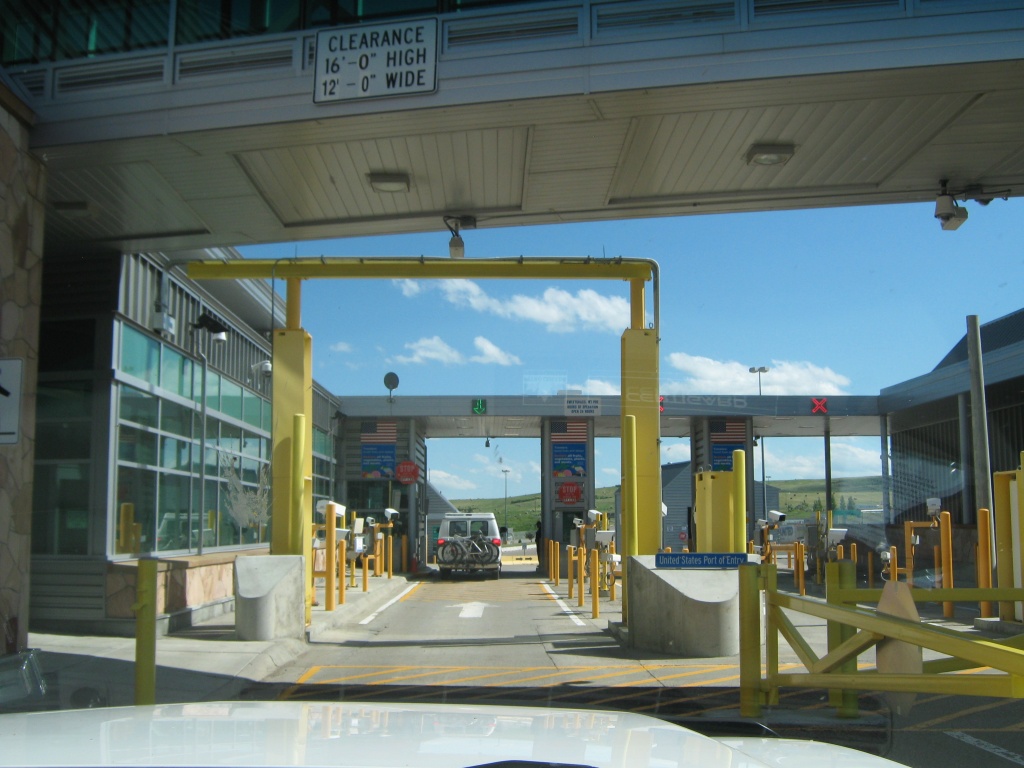 You’re too boring. Carry on.

We drove into Montana as far as Great Falls. We are staying at the KOA in Great Falls. They provide a couple hours of folk music in the pavilion. Tonight’s entertainment was provided by Grant Stephens. When he broke a guitar string the performance was over. All in all he is a pretty good guitar player and entertainer. Julie notes “They also provide wi-fi but unfortunately it is spelled more like w-iffy as we could not connect at our site. So to download some pictures from our gmail Brad headed with tablet in hand on the 5 minute trek to the wi-fi zone. Then back again to the camper for the code written on the campground receipt. Then back to the wi-fi zone, then back to the camper because what I had handed him was the grocery store receipt, not the campground receipt. Then back to the wi-fi zone and then success and back again. Now you can imagine how hard it was for me to read my book with all these interruptions not to mention eat my popcorn without choking because I was laughing a fair bit. Brad wasn’t having any issues with too much laughing by that time.” 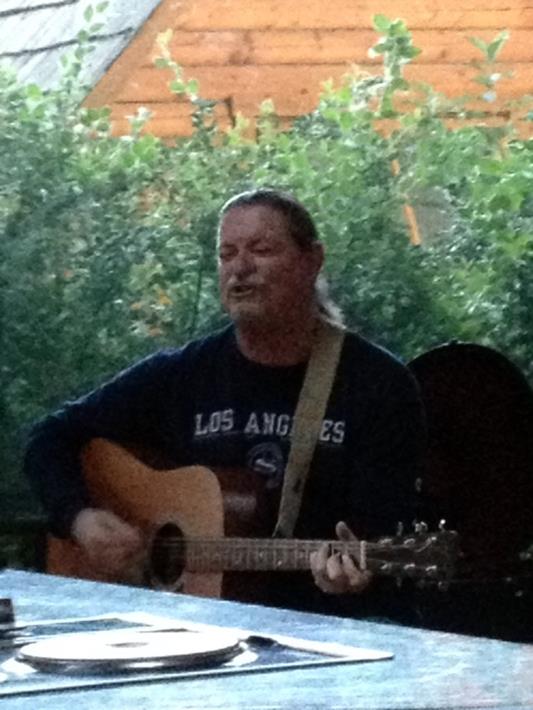 Julie notes “This first KOA experience was better than I expected. The sites are close together but well treed and thought has been put into the design of the campground. Amenities seem nice, although we won’t be using most of them. W-iffy, wi-fi but we need to start weaning ourselves off anyway, right? And our neighbours thoughtfully played their music full blast so that we wouldn’t have to waste power running our own music. Luckily we liked the music they were playing. But they shouldn’t give up their day jobs to become signers.”

The Muleskinner and his sidekick

Or rather Yogi and BooBoo “Did you pack a picnic basket?