Today was a day about crossing borders and camping at borders. We left San Miquel in El Salvador about 6:30 AM and headed for the Honduras border. Border crossings here are at a minimum a 2 step process. You have to exit the country you are departing with all the appropriate stamps and paperwork and then enter the new country. Today we exited El Salvador, entered Honduras, exited Honduras and entered Nicaragua. The border crossing times were actually quite good at about a 6 hour total for all 4 border processes. We met an ex Canadian retired military guy today who seemed ill prepared for this trip. He has suffered numerous vehicle breakdowns, paid over $1000 in bribes, and spent 12 hours entering Guatemala. It makes us feel a little better about going with a group and guide. We have not suffered any of those problems to date.

A local farmer watching us stopped by the side of the road early in the morning. Julie notes “See the chickens Melodie?” 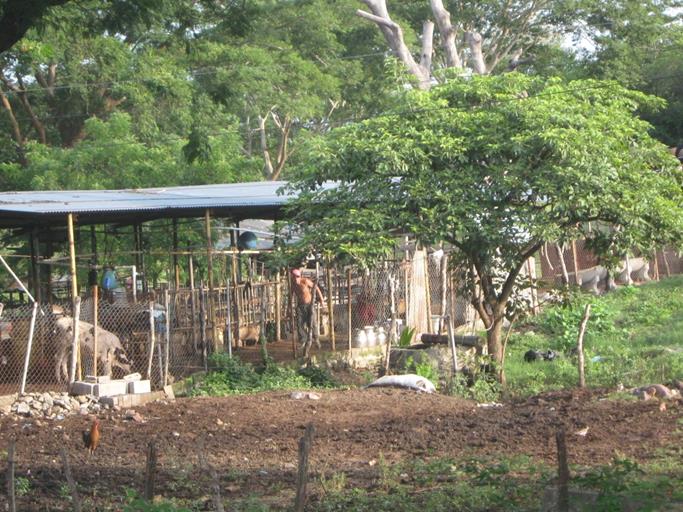 Some of the countryside. 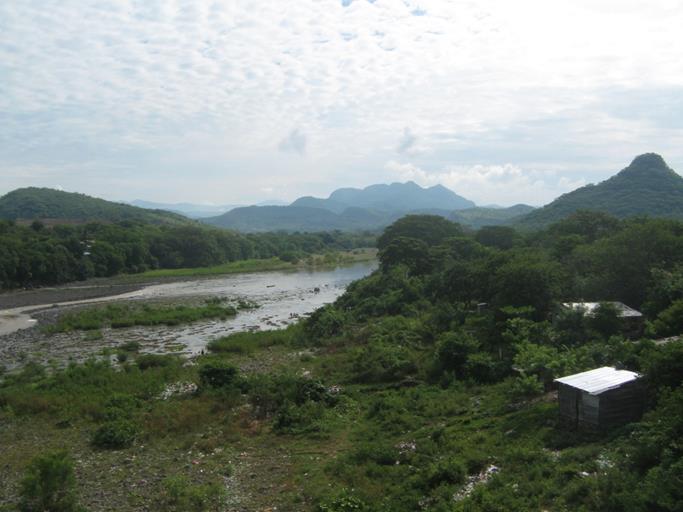 Entering Honduras. Julie notes “We made some friends at the borders because an idling vehicle is a potential buyer of the many wares that people are selling there. Money exchangers flap their large wads of bills at us, hammocks and cookies and meats and maybe hamburgers(something wrapped like a burger?) and pretty much anything you can imagine are offered for a price as you sit awaiting the paper chase to be completed. Women carrying their wares in baskets or large basins balanced on their heads, water being hauled in everything from traditional style jugs to plastic carboys. Most of the women vendors we have seen through these last 3 countries wear beautiful aprons with lots of colourful eyelet and lace. I have yet to get a good picture but I know mom would love them. It is hard to tell who actually works for the border authorities and who is just working for tips as random men voluntarily guide you and hop onto your running boards as you drive along giving you directions and suggestions, offering to run and buy reflector strips for your vehicle, warning you about other schemers and so on. Curious boys come up to the window wanting to talk and maybe get some money or a treat. Brad gave out a Trumpeter Swan pin (City of GP logo) and a Canada flag pin to one boy who was practising English on us and helping us with some Española. Word spread and we had boys and men of all ages coming to the windows for pins and then proudly displaying them on their shirts. Except for one woman, who was trying to sell hers for a dollar. More power to her if she was successful. We shared our photo albums as well with those interested. ‘Mucho frio’ was the unanimous comment when they saw the ‘very cold’ snow pictures. It was the very opposite to that there! We were lucky to be able to turn on the air every once in a while. During one cooling reprise Willie Nelson was belting out ‘Just can’t wait to get on the road again!’ Brad rolled down the windows and turned up the volume. Our hint must’ve been heard as we were soon moving again.” 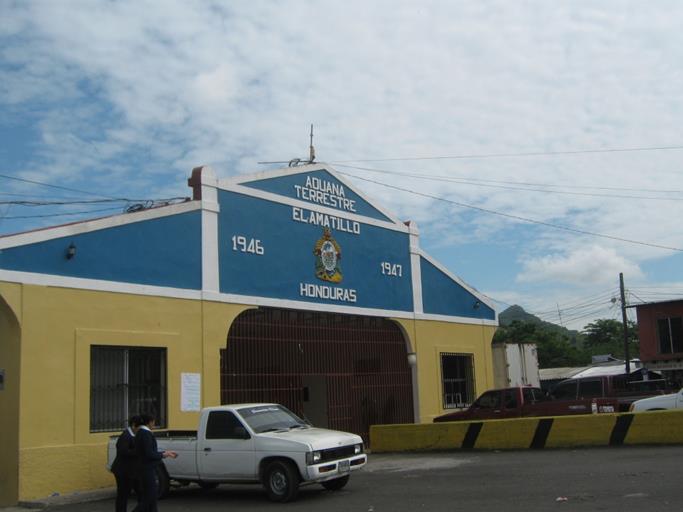 Julie notes “These little 3 wheeler taxis were very abundant and used by many. They go about 15 miles per hour we guess but some have added air foils on the top to cut down on drag and improve the speed we are assuming? I wasn’t fast enough to ever get my camera ready to get a picture of one with the air foil so maybe, just maybe it works. It certainly made them cuter!” 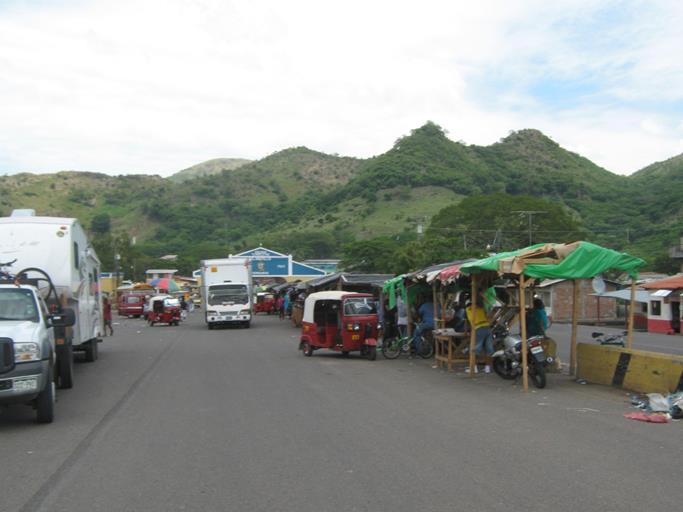 Along the pothole filled roads of Honduras small children stand in the middle of the highway begging for money with a shovel in hand pretending to fix the potholes. 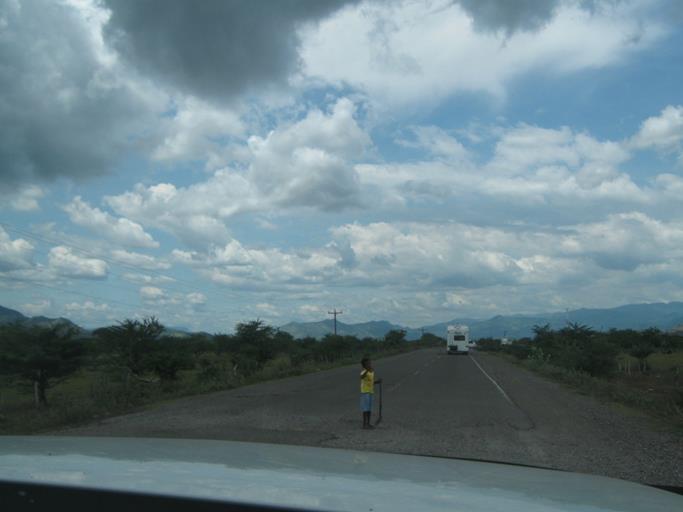 We travelled over a high mountain pass which climbed from sea level to 1070m. The scenery was beautiful, the homes seemed a little more affluent, and the people were very friendly. Many of the kids, and even the adults waved or gave a thumbs up as we passed by. 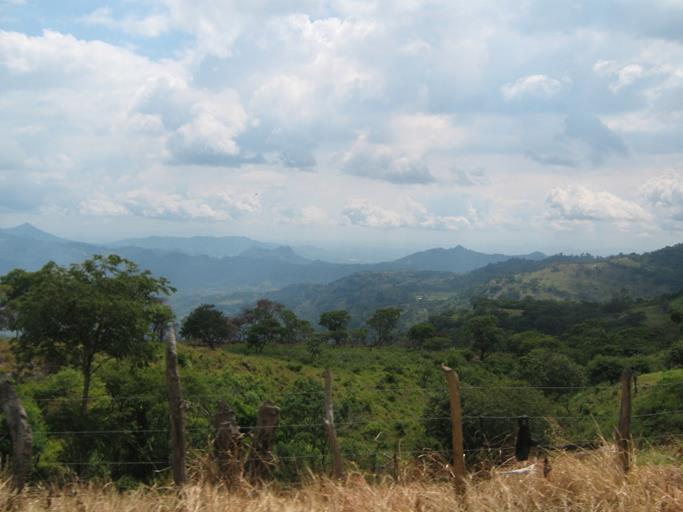 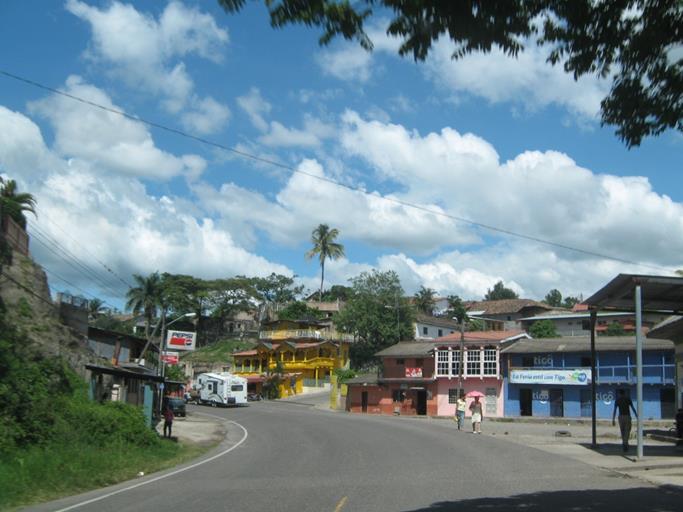 We exited Honduras and spent the night at the border crossing after our vehicles were fumigated and we entered Nicaragua. Julie notes “Could’ve saved them the trouble of fumigating if they’d known how many meals containing beans Brad has had lately. You wanna talk toxic fumes!” 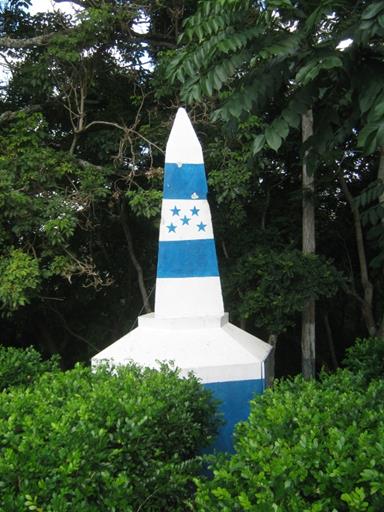 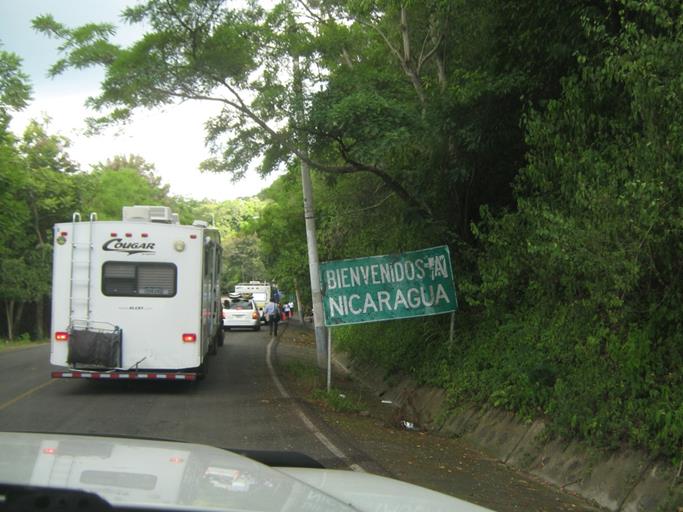 Believe me, not everything on this trip is spectacular. Spending the night at the border crossing may be safe, and even cooler because of the elevation, but it is certainly not picturesque, quiet, and serene. Julie notes “Especially when your wife is not happy. A good night for a hair wash and early shut eye. Never thought there would be a night I’d break Brad’s 7:20 pm bed time but it happened. It was probably a bit more serene for Brad after that.”

This is Julie trying to escape but I caught her before she could say “Nicaragua”! 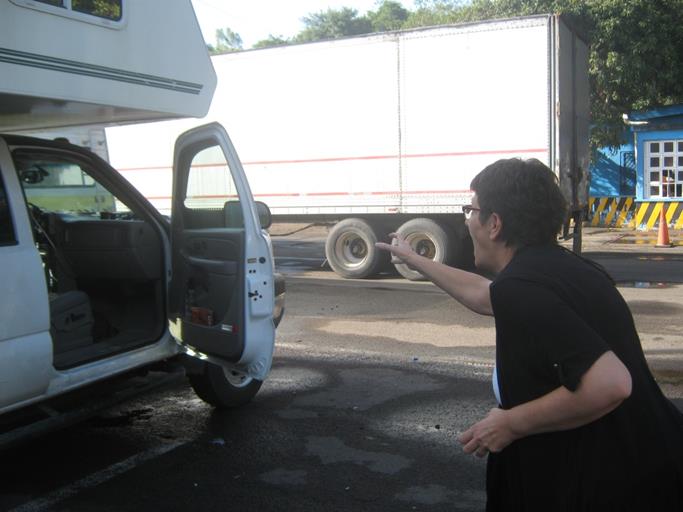 ….over and out for today, the muleskinner and his sidekick