It was cool here again overnight. The low was about -1C. It did not get as cold as it did in Gallup, NM where you are close to 7,000′ above sea level. The high today was about 23C and mostly sunny but the light desert wind makes it feel cooler. Julie notes “Thank you Jim Bob o.g. (ohso gorgeous) for the nice weather. The elevation here for those of you wondering just how high we are most of the time, is about 4850 ft. What a difference a few thousand feet makes.”

The Arizona State Park is a beautiful place near Winslow. And guess what? It has more ruins here from the Hopi tribe. Julie notes “I did not know that when I first suggested we come here honest! (Pssst They also have a museum and gift shop. Don’t tell Brad.)” We renewed our camping permit for another night and filled out a 15 minute survey for the Arizona State Parks in exchange for a free night camping worth $20. Julie notes “We saved $20 bucks and I was able to leisurely explore the beautiful displays and exhibits they had, while Brad made up answers on the survey. Win/Win/Win situation.” We then headed the 3 miles to one of the ruin sites within the park. Most of this site has not been excavated and stabilized. It is mostly still buried by the desert sand. Julie notes “Well archeologists have explored a lot of this site and this area. Homolovi, ‘Place of the Little Hills’, was a thriving area in the 14th century. On bequest of the Hopi peoples, archeologists explored the area and upon completion of a 5 year project, filled the site in with desert sand to protect from erosion, etc. Other methods besides digging, including aerial surveys, are used now as well for less disturbance of the sites. Pot hunters had raided this site extensively making it look like it has been bombed to the dismay of all. A very informational audio tour was available on our phone and it was neat and a bit eerie walking form sign to sign with the traditional Hopi music playing. If you would like to know more about what I learned and have since forgotten please contact me and I will be happy to relay more misinformation to you. If you are writing a school report on this though I would suggest you Google the info. I don’t want to be responsible for any ‘F’s on your report card. I had enough of my own.”

After touring the site it was time for lunch. We checked the ever faithful Trip Advisor and discovered the Turquoise Room at the La Posada Hotel in Winslow, AZ was rated #1 and had some great reviews. It did not disappoint! I am not sure what we did before the Internet? Eat at a lot of bad places maybe? Oh yeah, more importantly, Julie let me buy some more firewood. J Julie notes “Just to clarify, he did not buy firewood at the restaurant. That was at a garage.”

We toured around the small town of Winslow, AZ singing the Eagles song, Take It Easy with the lyrics “Standing on a Corner in Winslow Arizona”. I sounded really good with my natural talent; Julie not so much. Julie notes “We of course had to get a picture of Brad standing on the corner. We were wondering why the locals were snickering as he posed in front of the Winslow post office, on the corner as I took a bevy of pictures from across the street. Turns out there is an actual corner delegated for these photo ops. But maybe we started a new trend? Won’t be the first time.”

We headed back to Homolovi State Park and relaxed for a bit in the sunshine and watched a beautiful sunset. After the sun sets, the temperature drops rapidly and cools the air down especially with a bit of wind. We headed into the camper and enjoyed some snacks and leftovers for supper. Julie notes “Jim Bob o.g. (Ohno Gouda?) declined the snacks. Could be he didn’t want to crumbs on his mittens or that he never was a big cheese fan, smoked gouda or not.”

Julie notes “Some of the excavated walls of this site that contains from 1,200 to 2,000 rooms. We assume there are hidden cameras somewhere to watch for vandals but most likely to watch people like us going in circles trying to figure out if we are at the right view point or not.” 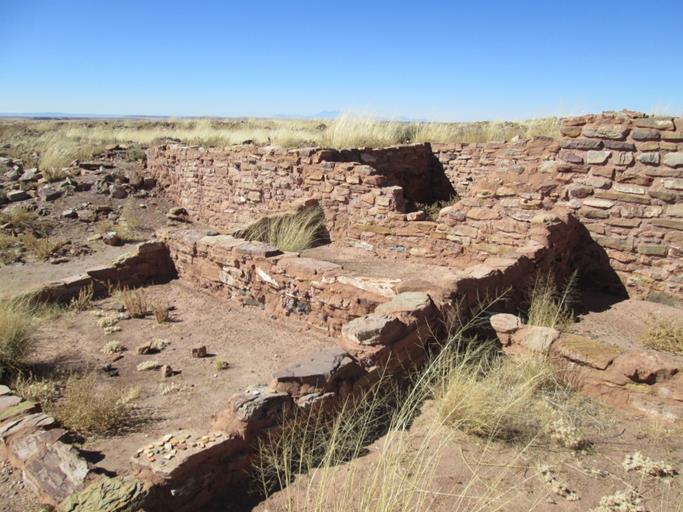 Julie notes “Another big party here back in the day I guess. Beautifully patterned pot shards litter the area.” 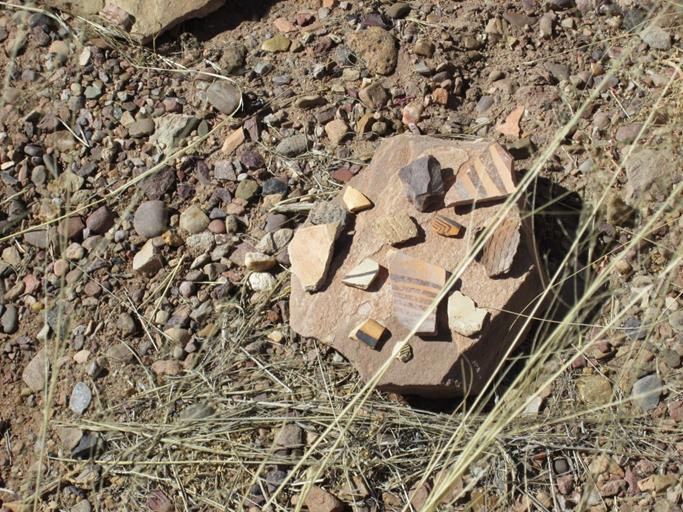 Julie notes “Using our imagination to see the walls and 3 huge plazas that were busy places at one time.” 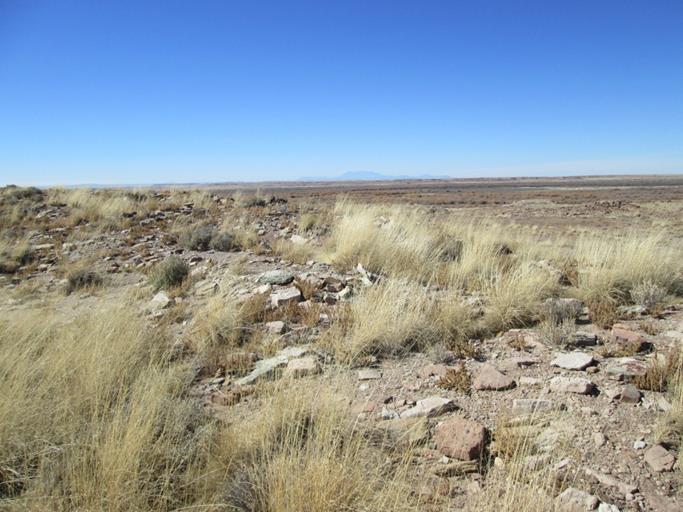 La Posada Hotel Julie notes “This is another historical site (with a self guided tour and museum and gorgeous gift shop), that will be on the list to explore further next time. As one reviewer put it, Winslow has seen some hard times but La Posada and the Turquoise Room seems to be immune. It is the last Santa Fe Railroad Hotel to be built. The train station is out the back door.” 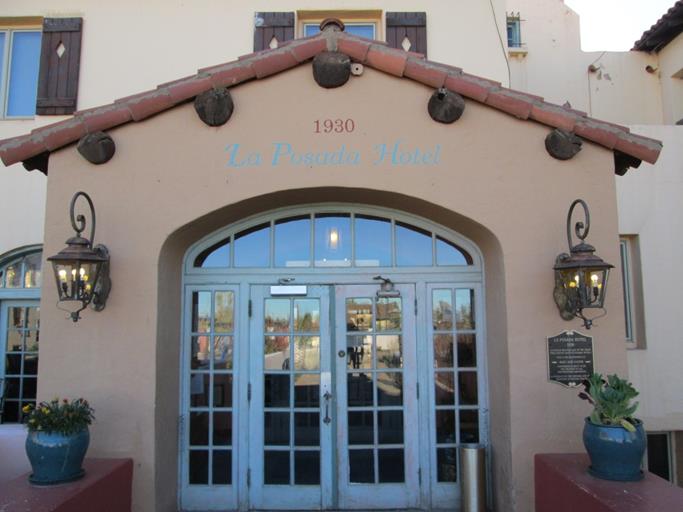 Julie in her happy place. Julie notes “Yes, as with the rest of the Holmes, when I am in my happy place and smile, my eyes disappear. At least they are not rolling up into my head, this time.” 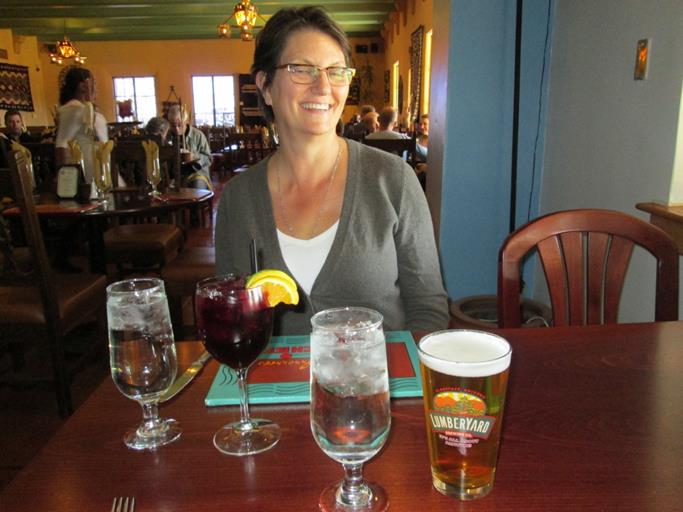 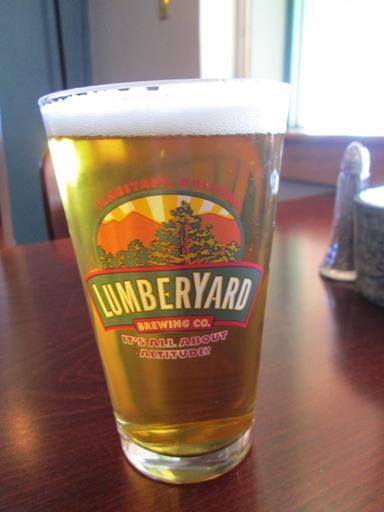 More Julie happy times. We shared the Piki Bread with Hopi Hummus. It is a ceremonial bread made by the Hopi. The local delicacy is difficult to make with blue corn flour and ashes from juniper. The hummus was also their local version. We both had the signature black bean and cream of corn soup. I had the Southwestern Turkey Cobb Salad and Julie had the Crab and Avacado salad with heirloom tomatoes. The Turquoise Room is an excellent choice for a delicious meal in Winslow, AZ. Their #1 rating is well deserved. Julie notes “mmmmm so good, but do not waste your time asking for the signature recipes, there is a reason they are called signature. The walls are decorated with memorabilia of the Fred Harvey days and beautiful Navajo weavings. There was one in particular beside us that caught my eye and I thought they might throw it in with our meal. Only if we bought $1,385 worth of lunch I guess. I should’ve ordered the sandwich.” 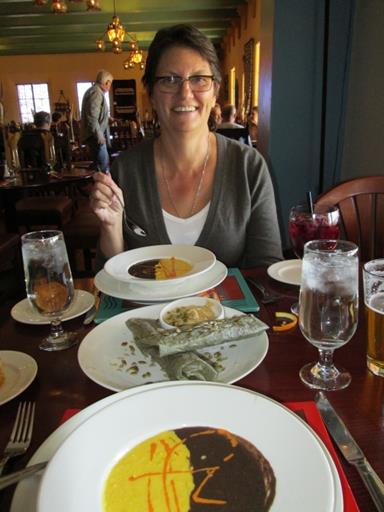 And of course, Julie caught me “Standing on a corner in Winslow Arizona”. Julie notes “Such a fine sight to see! Brad is the one on the left. The other guy ‘wooden’ get out of the way.” 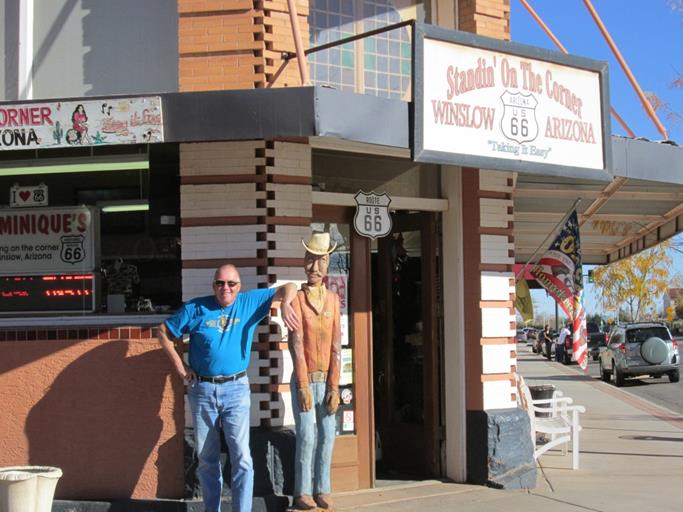 Julie notes “A little information mission for those of you who enjoy that (Suze and Aunt Lynne) and those of you who enjoy making up stuff (Quent and Aunt Doreen). Who was this Fred Harvey who’s name keeps popping up around and about these parts? The restaurant had a quaint old picture of waitresses called ‘The original Harvey girls.’ And it didn’t look like any Harvey’s restaurant we have been to.”