We woke up in the Aurora Inn in Dawson City to temperatures of -26C. After some coffee, yogurt and berries we headed out.  Julie notes “Not that I’m complaining BUT someone ate the last of the yogurt. I’ll let you guess who.”  I tried airing up the dually but at those temperatures I was freezing my fingers before getting much air in the inside dually.  Julie notes “He kept mumbling through frozen lips something about needing an extender on his valve. My brother suggested via email it could be a shrinkage issue due to cold. It all sounded too personal so I ignored him, even when he was wrangling the retractable air hose, fiddling with freezing extenders and very noisily (and rather annoyingly I might add) pounding on the side of the truck for me to turn off the engine  Why do I always have to do everything?  And did I mention I didn’t even get any yogurt for breakfast!”  We headed out for Whitehorse the way we were air/tire wise. But first we stopped by the post office so Julie could mail a couple of items. 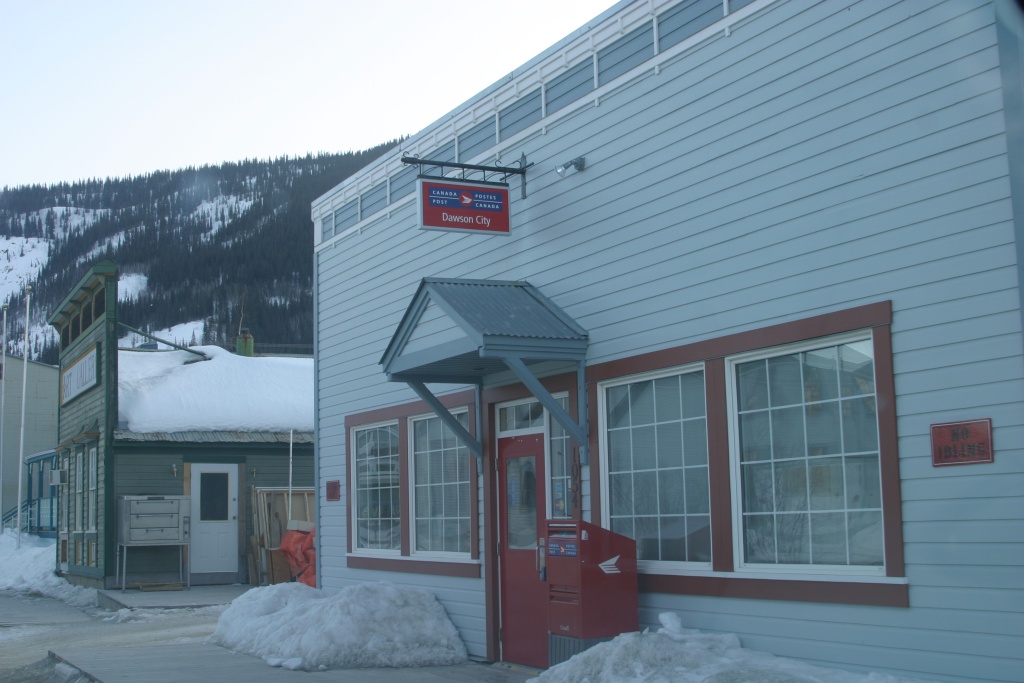 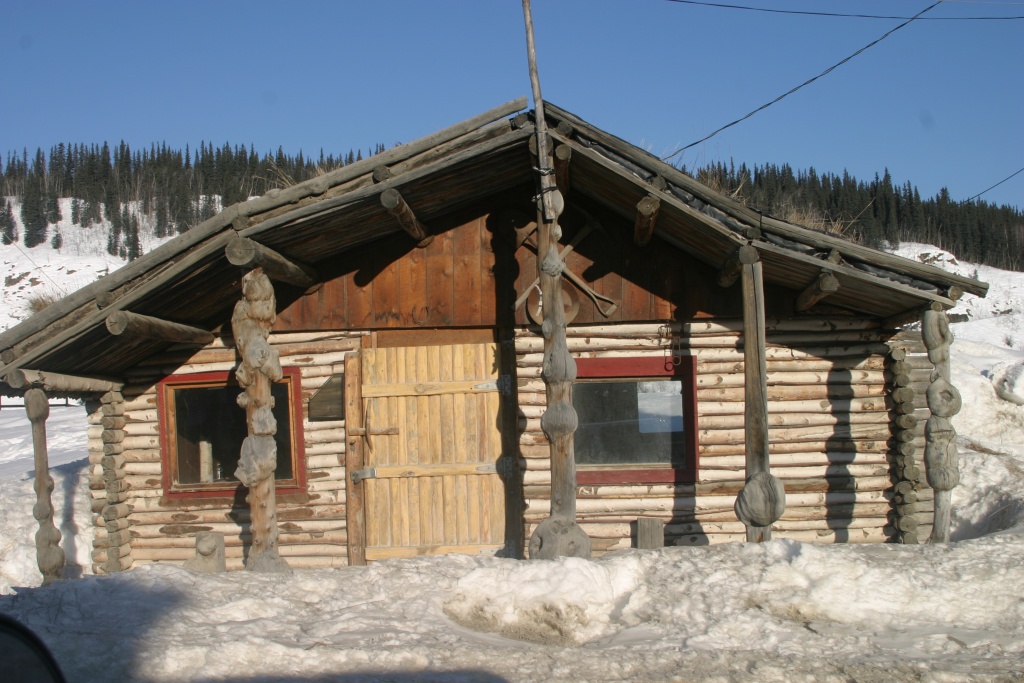 One of the many old historic buildings in Dawson on the banks of the Yukon river.

We made a stop at the convenience store in Stewart Crossing and Julie celebrated with a Stewart Root Beer.  Julie notes “Just want to thank our good friend Denise and her forebearers for discovering this great river, building the bridge, starting this settlement and inventing this root beer. Denise says all the Stewarts are related so I figure she can pass on the gratitude.” 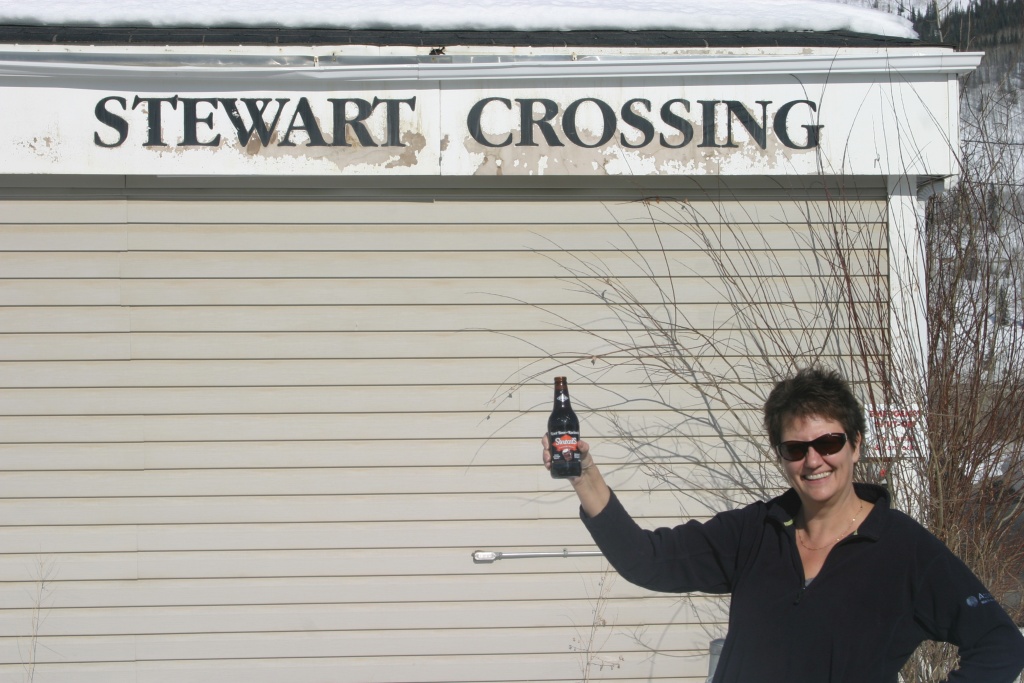 Todays drive was about 550 kilometres. We drove by the very picturesque Fox Lake not far from Whitehorse. Julie notes “Prior to this we drove along at least 25 kms of the remains of the 1987 Fox Lake forest fire. I’m sure there was new growth hiding under the snow but a reminder of nature’s force.  Also yesterday we forgot to mention the crazy ptarmigans that seemed to be racing along side and in front of our truck.  Or they were playing chicken, which is maybe how they got their nickname Arctic chicken.  Snow buntings and grouse were plentiful too.  A bald eagle rose up beside us and I got to watch it through the sunroof, zoom over the truck at very close range.  Not to be confused with the slightly balding eagle scout at very close range beside me IN the truck.” 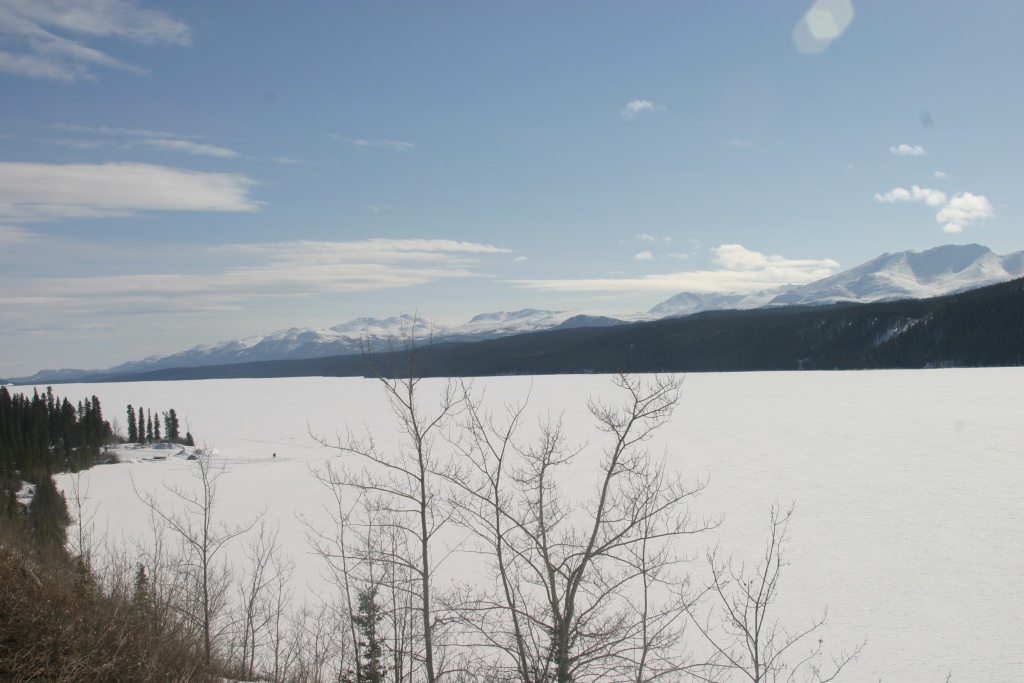 We drove by the very picturesque Fox Lake not far from Whitehorse. 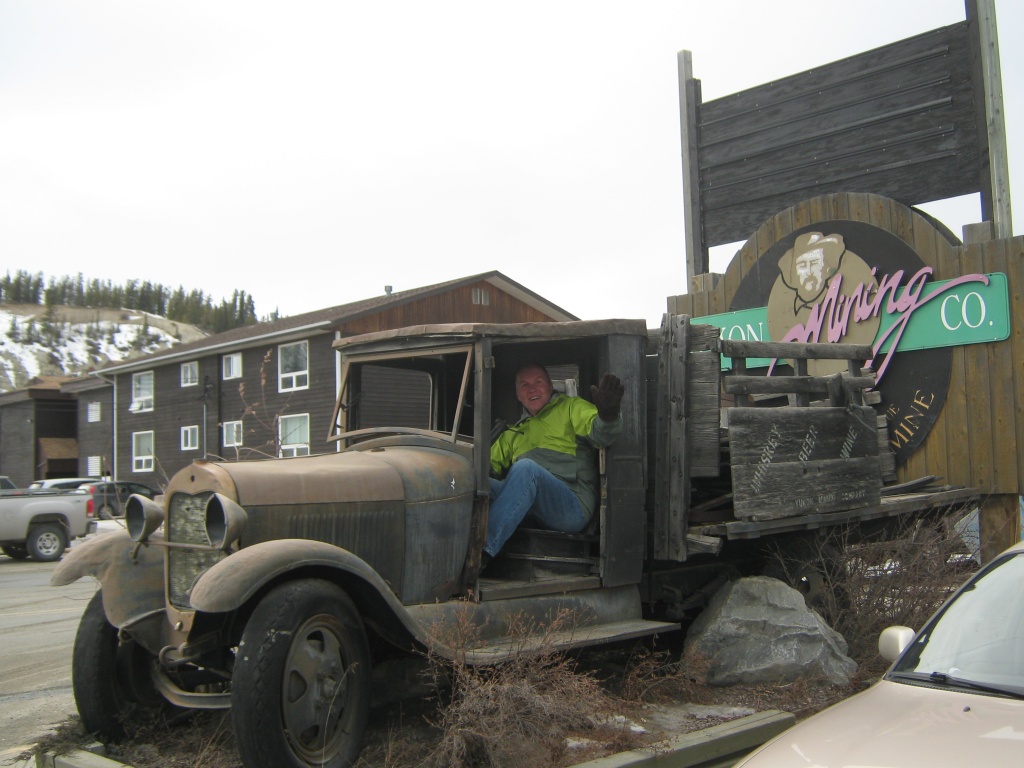 Ever since our first day on the road when we met the guy living his dream, I’ve been on the lookout for a new rig.  This one needs a bit of work but the price is right. But it’s hard to keep up with the neighbours,  Julie  notes “This is what happens when you gamble for pink slips at the casino.” 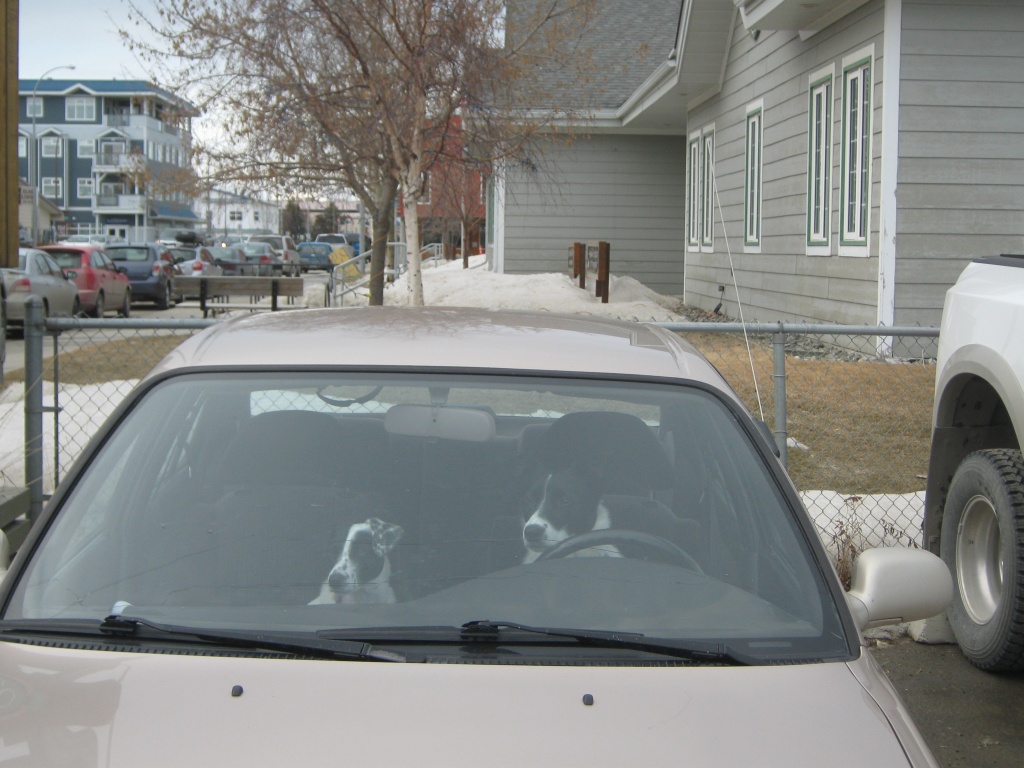 Julie notes “Pretend I’m Ellen and tell us your caption for this picture below. Just add a comment. Winner gets a free subscription to this blog!”

After so many days on the road eating at diners and out of our cooler we decided to treat ourselves to a ‘”nice” dinner out.  Antoinette’s was featured on the Canadian Food TV show “You Gotta Eat Here” and was rated #3 on trip advisor.  The food and service was outstanding and we got to meet the owner and chef herself, Antoinette.  A great evening out! 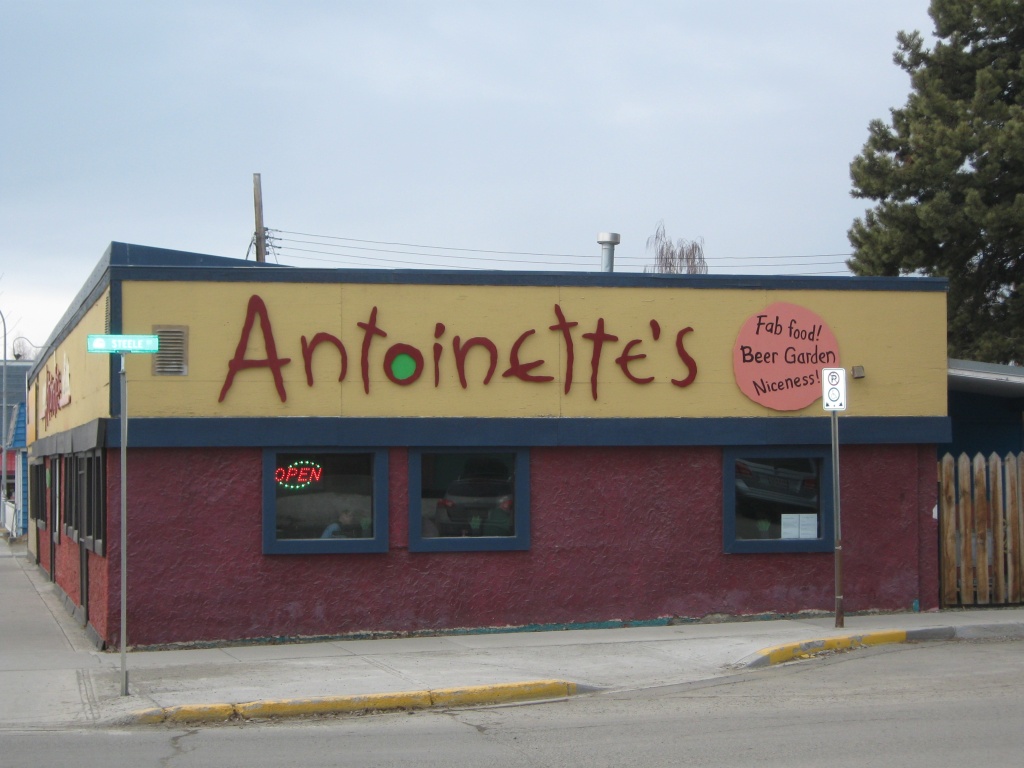 Antoinette’s was featured on the Canadian Food TV show “You Gotta Eat Here” and was rated #3 on trip advisor. 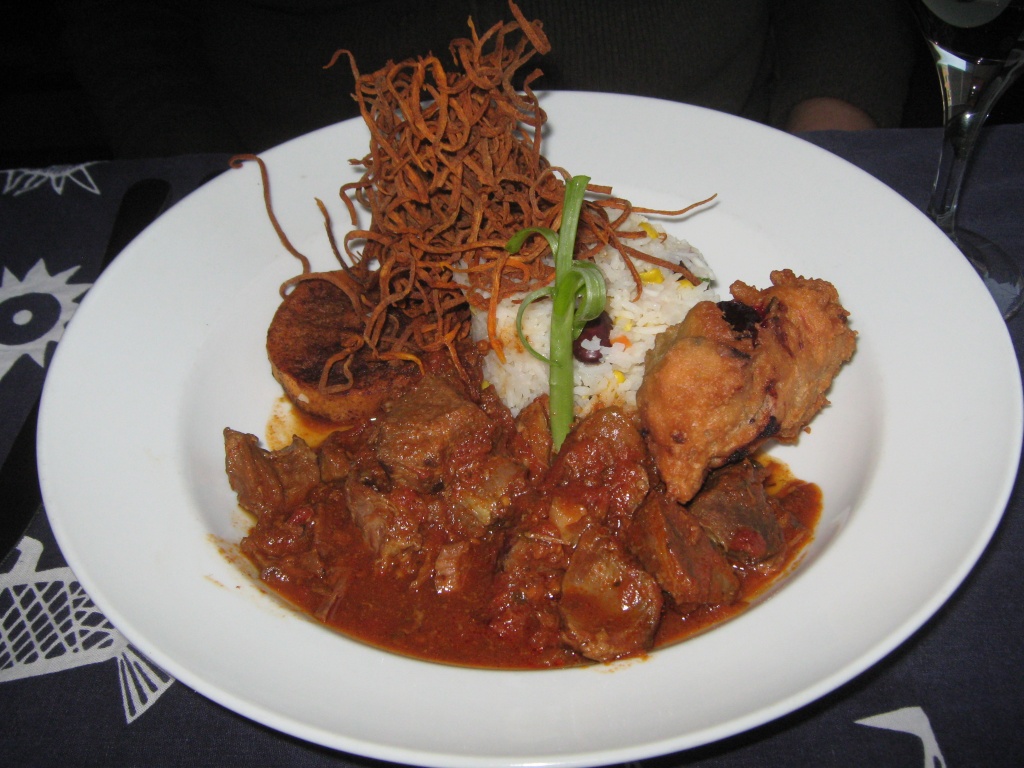 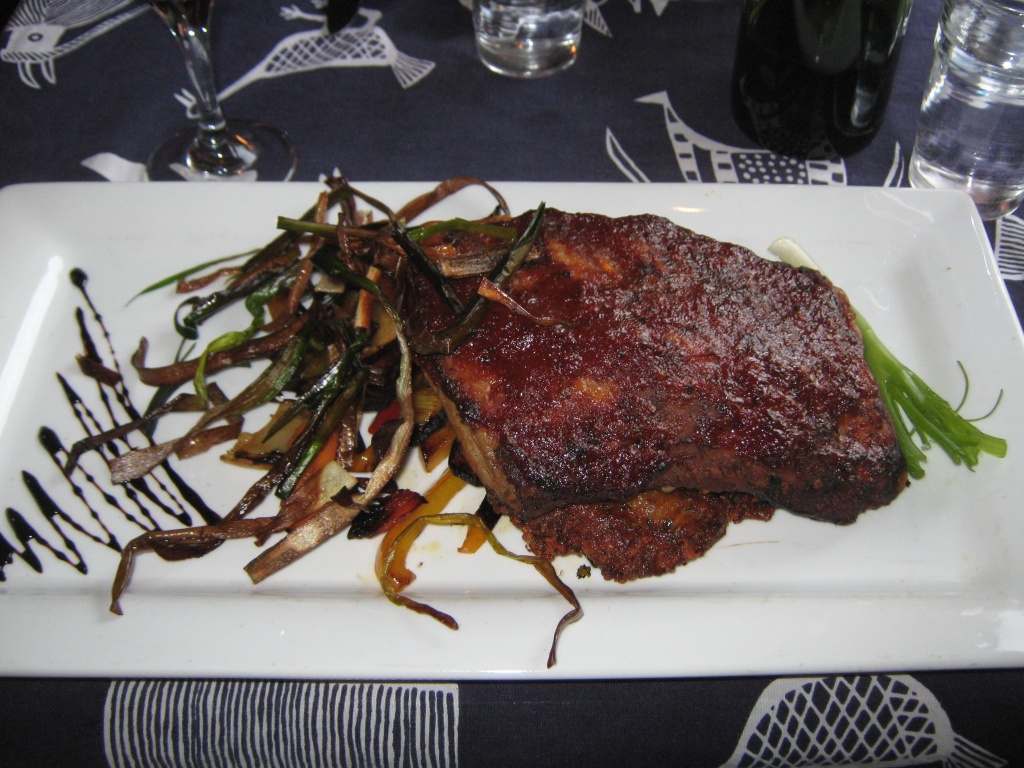 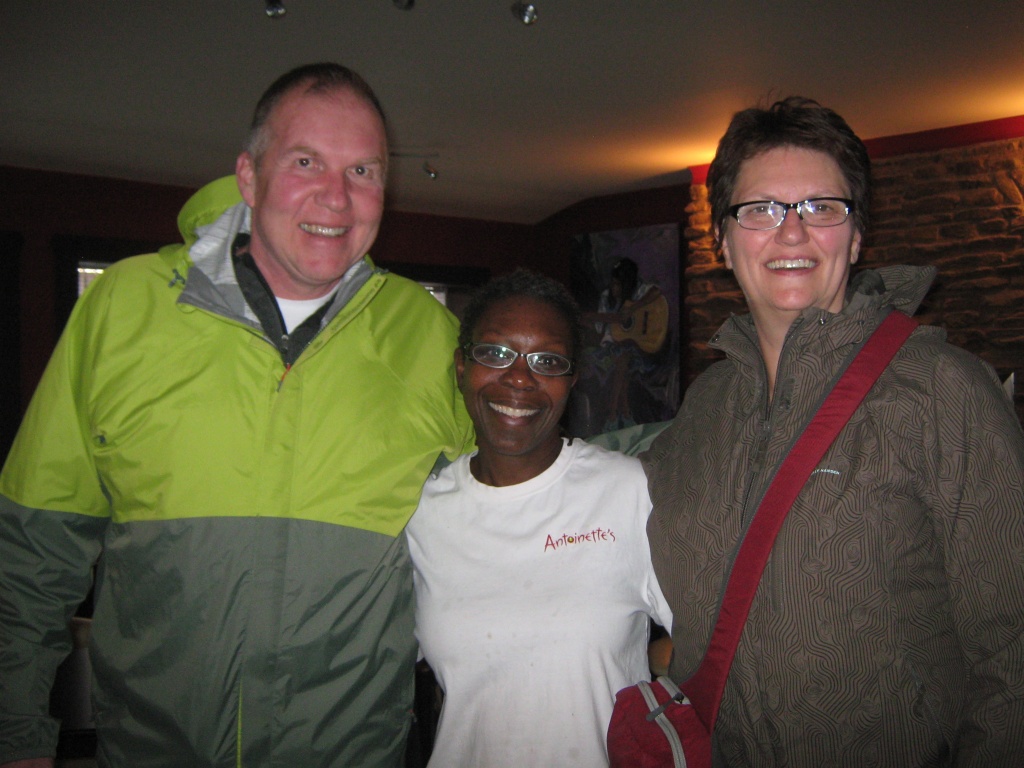 Antoinette GreenOliph of Antoinette’s Restaurant standing with some travelling giants

…carry on, the muleskinner and his sidekick

One last note from Julie “The iTunes spoke to me today with some shout outs to my family. “Golden Years” by Holly Dunn started us down the road as we think of our parents and soon us growing old together. Soon followed by Bill Withers “Lean on me.” and the Hollies “He ain’t heavy, he’s my brother” for all you folks out there propping up your loved ones as needed. Your sacrifices don’t go unnoticed. Thank you!”