Today we drove over 250 km from our site near the Copan ruins in Honduras, crossed the border into Guatemala, and travelled through Guatemala City to the RV Park near Palin, Guatemala. We arrived around 5:00 PM after fuelling up and doing some grocery shopping. The RV Park is not too far from Guatemala City. We are at the same RV Park that I had stayed at when Julie was in Ontario; “Turicentro Automariscos” at KM 34.5 on the Carr Al Pacifico near Palin. The park has full hookups for the RV, natural hot pools, swimming pools, water slides, restaurant and lounge, snack bar, and iffy wifi (not to be confused with iffy wifey) near the main facility (but not from our site). Julie notes “The best part about it is it is quite clean and they are working on maintenance all the time. And we are situated right near the highway so still get to hear the trucks decelerating and ‘chicken buses’ honking their horns as they approach the 2 bus stops adjacent us in case we get too out of touch with reality.”

The border crossing was quite fast and efficient and was not too busy and they had lots of parking. It was a real treat compared to some others. Julie and I got lost in Guatemala City for a half an hour or so when we got separated from our guide in heavy traffic. We ended up mistakenly exiting the bypass we were on when 2 lanes went to the left, 2 straight, and 2 to the right. The bypass, we now know, is the 2 lanes to the left. (Julie notes “In case any of you guys plan to repeat this trip please note unless you plan on visiting the little area of El Nuevo.) It became quite obvious we were lost when the 2 lanes got narrower and narrower and the buildings were at the edge of the one lane road with narrow sidewalks. We had radio contact with our guide who was waiting up ahead on the bypass. After getting turned around and heading back to the bypass we figured out where we were and how to rectify our error and were on our way again. Julie notes “I did not take any pictures of where we ended up. I didn’t think that that would help calm the situation any. But it was kind of like one of our cab rides we’ve described but driving ourselves and not knowing where we could possibly turn the rig around. But squished in there were also some transports and cars and Brad wisely followed them and then did his ‘Windmill Gringo speak’ to a policeman who was standing at a minor accident scene on the highway and he got us pointed towards the correct turnabout. We would like to claim the award for the first of the group to get lost but first of all ‘we are the group’ and second of all, our guide has been lost a few times, difference was we were right behind, so we were lost together. I think there is a song there somewhere.”

Julie is now using our “good” full DSLR camera from the passenger’s seat because our smaller point and shoot Canon camera started over-exposing all of the pictures. It was good for a few laughs watching her try and hold the camera properly, use the viewfinder, and take a picture. I must say her co-ordination using a camera is not what the ergonomic designers had in mind. But once she got the hang of it, she was shooting pictures with great veracity. Julie notes “Ha! Brad thought he could cut down on the number of pictures I take by sabotaging my little camera. No such luck buddy boy. I do have a bruise on the bridge of my nose though from banging the camera lens into the side window. And the seatbelt doesn’t let me lean forward enough to get close to the wind shield. With my little camera I just held my long monkey arms out and clicked. But despite these new restraints on my photography style I just keep clicking away to the blog editor’s dismay. Also you will have to imagine all the amazing shots ‘that got away’ before I realized my tiny camera had crapped out. A herd of big horned cattle bearing down on us, stopping traffic, a horse stretching his tether out across our lane of highway refusing to move, cute kids, breathtaking scenery, plus the usual blurry, off kilter, no content ones that I’m famous for – award winning stuff for sure. I do have quite a few now of my knees and the truck floor as I was experimenting trying to see what the issue was. If you’d like to see those just let me know.”

We lit a charcoal BBQ, located at each site, and BBQ’d some steak and some mystery meat – I think it was pork? Julie notes “We’re pretty sure it was too big to be squirrel or iguana but it was in the beef section of the grocery store. We think. Could’ve been the monkey section. The signage wasn’t great.” We grilled some onions, red peppers, and had baked potatoes with sour cream. Mmmm good. Julie notes “Ditto that.”

Leaving a small town in the area near the Copan Ruins. 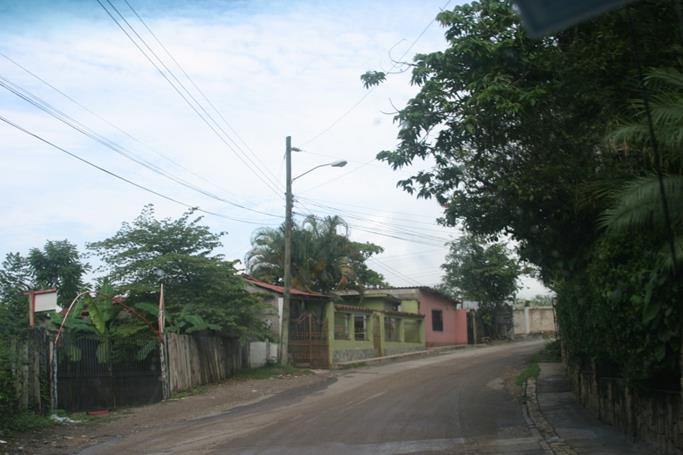 Typical countryside. Julie notes “Imagine the ‘clunk’ as I swing and hit the camera on the window.” 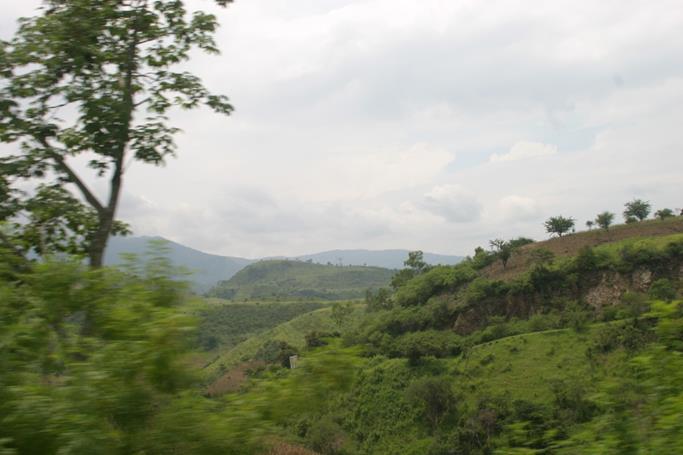 Part of the excellent freeway nearing Guatemala City. Julie notes “All of a sudden we were routed onto the oncoming lanes of traffic. There had been a mudslide on our side of the freeway that they were cleaning up. I was just glad the 3 or 5 little orange traffic cones they had at the other end of the detour was enough to keep the oncoming traffic from barrelling into our lane. How do you say Aaaaa!!! in Espanol?” 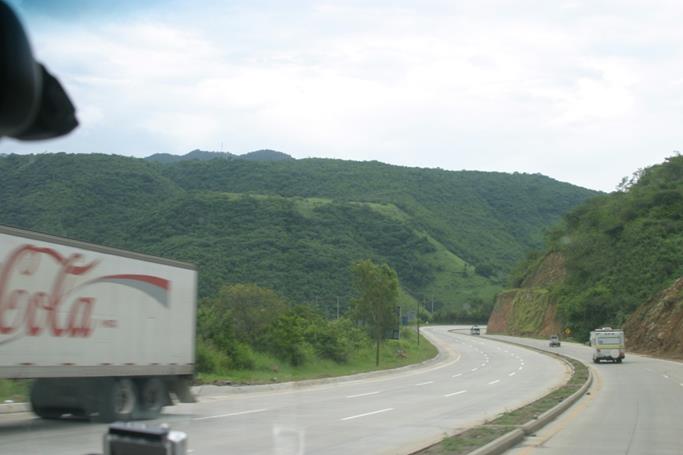 More countryside. Julie notes “It is a beautiful place and as you can imagine the roads do a lot of winding up, down and around. We were warned about runaway trucks and saw many breakdowns.”

Guatemala City. Julie notes “Imagine bicycling up there after working downtown. I’m out of breath just getting my helmet on.” 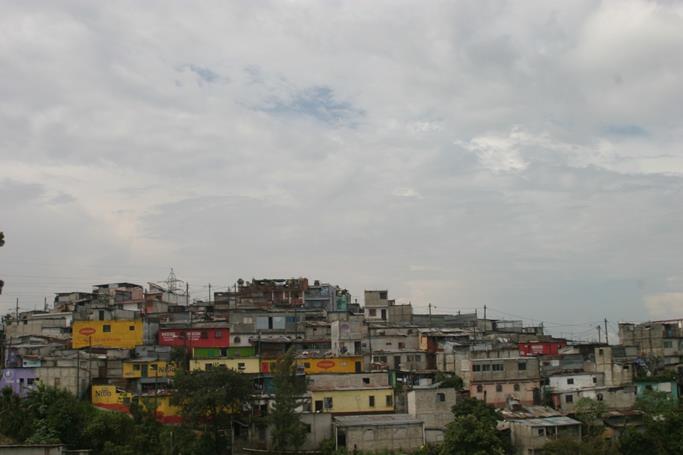 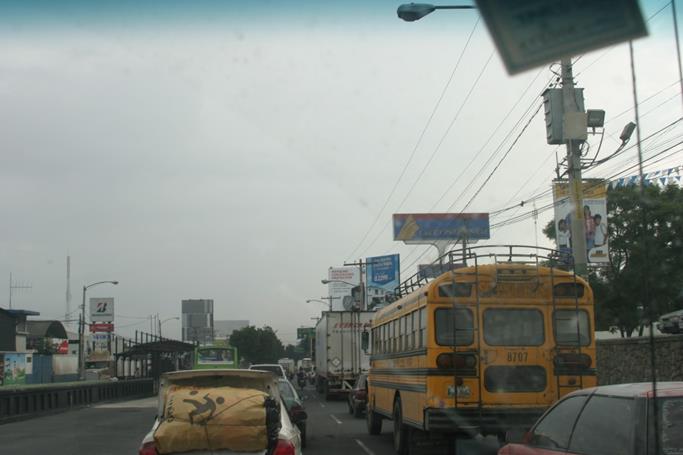 While we stopped in traffic, these two kids would not let Julie take their picture. They would smile and look at us and wave until Julie pointed a camera at them. They would sheepishly look away. Julie notes “Kids are kids wherever we go. They make the world go round. Plus they were probably wondering why I kept hitting my face on the camera and the camera on the window.” 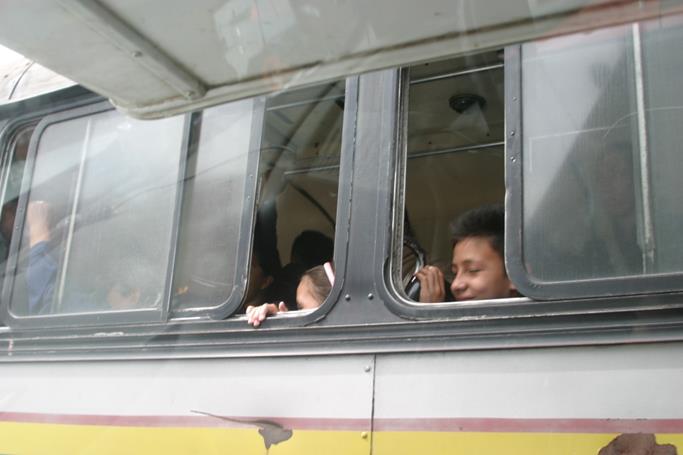 Julie notes “‘Too ra loo ra loo ra’ played at supper time and made Brad reminiscent of Dad and I just cried a little. It is a weird world without them. I know they’d be very relieved we were headed back to the homeland and we also had some great upbeat songs yesterday like ‘Lord of the Dance’, ‘My Old Man’s a Dustman’, ‘If I had a Hammer’and the ‘MuleSkinner Blues’ to go with the happy thoughts.”