Julie notes “Sorry for the lapse in reports after our ‘Three Blog Night’ a week ago. We are now speed blogging to catch up. Get ready to be superblogged.”

Today we drove about 627 kilometres from Effingham, IL to Munroe, MI right through Toledo, OH. It is a very industrialized area around Toledo. There is also quite a bit of agriculture in the rural areas. The trees are mostly hardwoods so we know we are in the east. Julie notes “For those of you concerned, we did start gradually speaking to each other again as we realized we were stuck with just each for a few more miles before we would reach family reinforcements. The iTunes belted out the ‘Mule Skinner Blues’ which is what we may have been suffering from as we come to the realization that our adventure is slowly winding to a close. Then K.D. Lang was singing ‘Hallelujah’ maybe praising the fact we were soon to be back to our home land. Or that we were speaking to each other again. Or maybe echoing Brad’s thoughts that there weren’t near as many windmills to take blurry pictures of in this region. But there were lots of nice farms and some silos.”

We stopped for lunch in Anderson, IN at Ruby Tuesday. This was our first visit to this chain and it was pretty good. We both had the salad bar, as promised. Don’t tell anybody, but Julie also tried their Tempura green beans and I added a chicken tortilla soup. Julie notes “My porridge from the hotel breakfast bar was wearing off, and I needed to keep my energy up in case we did get back into a windmill zone. Need to keep the energy up for camera clicking.”

We got a room at the Hampton Inn in Munroe, IL before heading out for dinner. We had some accounting to do before crossing the border into Canada. A 20 minute job of sorting out our purchases turned into about an hour and a half. Julie was right again. I was going to try and sort this out at a gas station parking lot but she convinced me we should just get a hotel in Munroe for the night to get things sorted out. Julie notes “It’s not easy being right all of the time, but being the humble, quiet sort of person that I am, I just take it all in stride and mumble loudly under my breath ‘I told you so’, leading to Lesson #147 ‘Listen to the Sidekick ’cause she knows stuff.'”

We wondered if we were going the right way when we were welcomed to Brazil. Maybe we made it to South America after all? 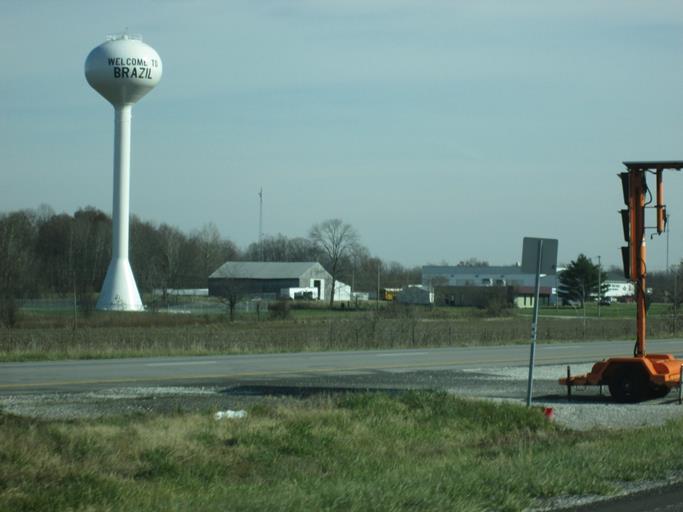 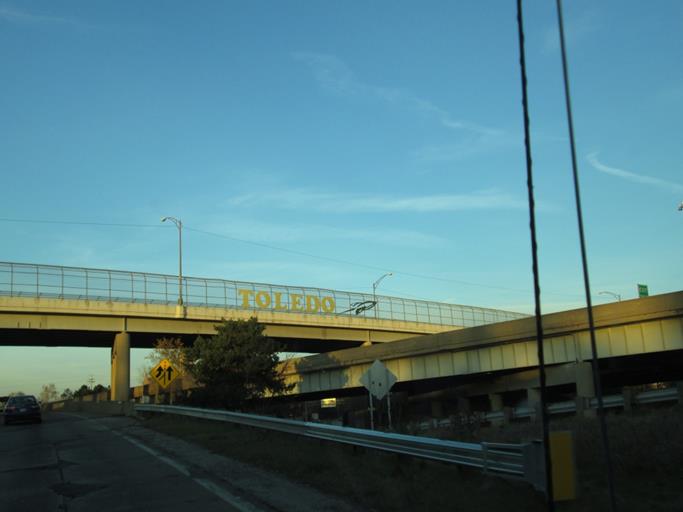 There were some beautiful old farms in the rural areas. It was actually quite flat through much of our travels today. Julie notes “Must’ve been homesick for the old farmsteads because I took numerous shots along the way. The itchy camera finger is a curse.” 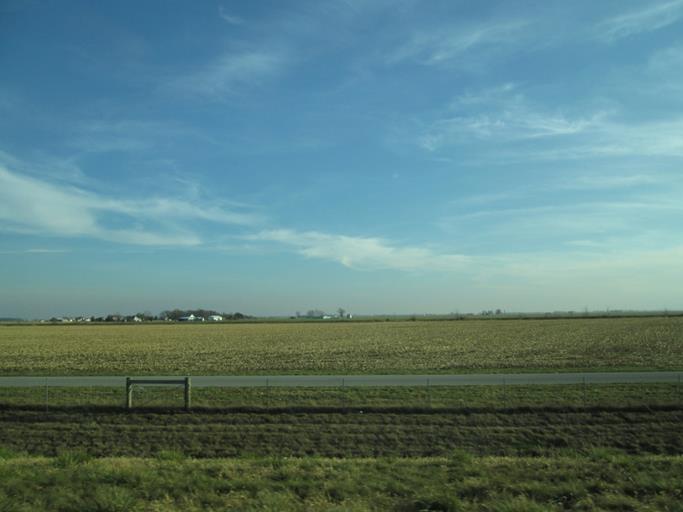 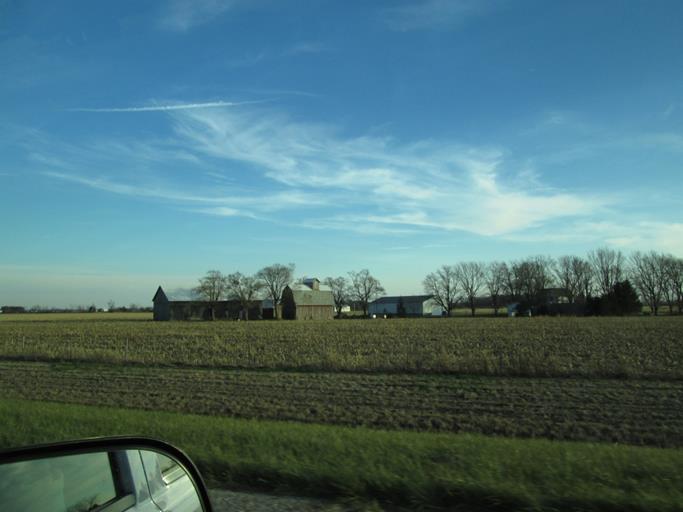 This is a shot of a guy who didn’t want the factory air option and thought his red-neck idea was better; a small generator and a window mounted AC unit in the back of the truck. He is heading to Detroit to sell this idea to the big manufacturers. Julie notes “Best of luck to him. Looks like a sure thing to me. And while we passed him and his creation, Jim Croce was signing about ‘moving me down the highway.'” 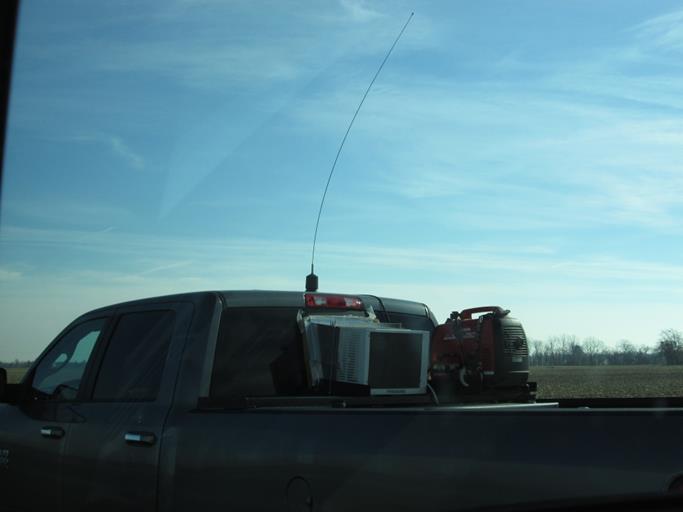 After some bill sorting, we headed to Red Lobster, right next door to the Hampton, for a late dinner. No, it’s not salad but the Bar Harbour Lobster Bake. We both ordered this special; a roasted split Maine lobster tail, tender shrimp, sea scallops, mussels and linguini in a garlic and white wine broth. Excellent! Julie notes “There was a lot of garlic and bits of tomato so it was ‘salad like’. Plus we walked both to and from the restaurant. (all 100 yards).” 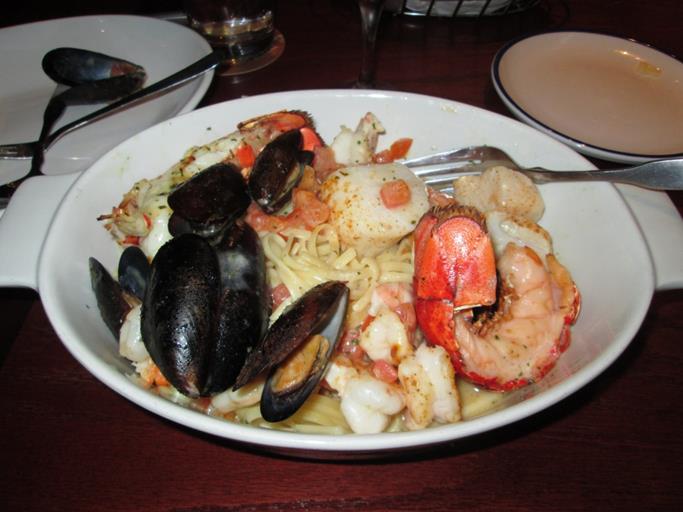 …over and out for today, the muleskinner and his sidekick (who is always right and is speaking to him again, now that he has acknowledged that)