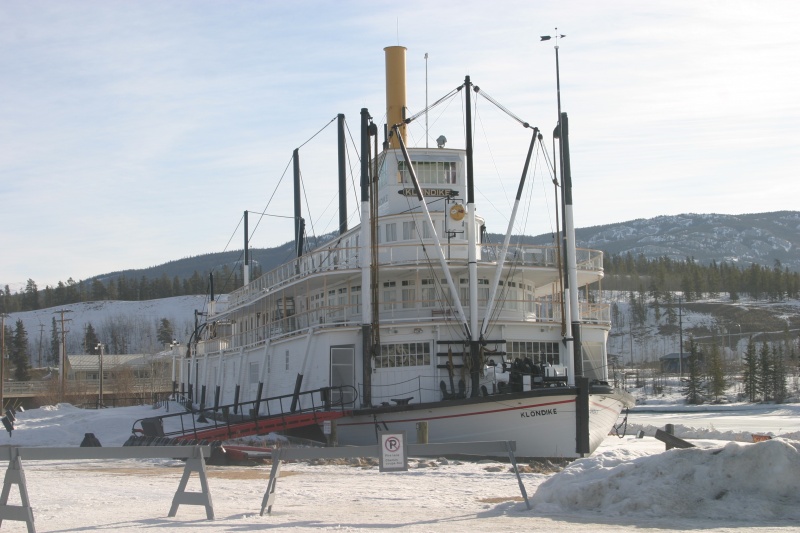 Today was a longer day driving at about 600 kilometers.   You learn first hand just how expansive our country is when you explore it in a vehicle.  We left Northern Lights after another big breakfast with our hosts.  We drove into Whitehorse for a car wash, fuel, and Tim Horton’s coffee. We made a quick stop at the paddle wheeler. 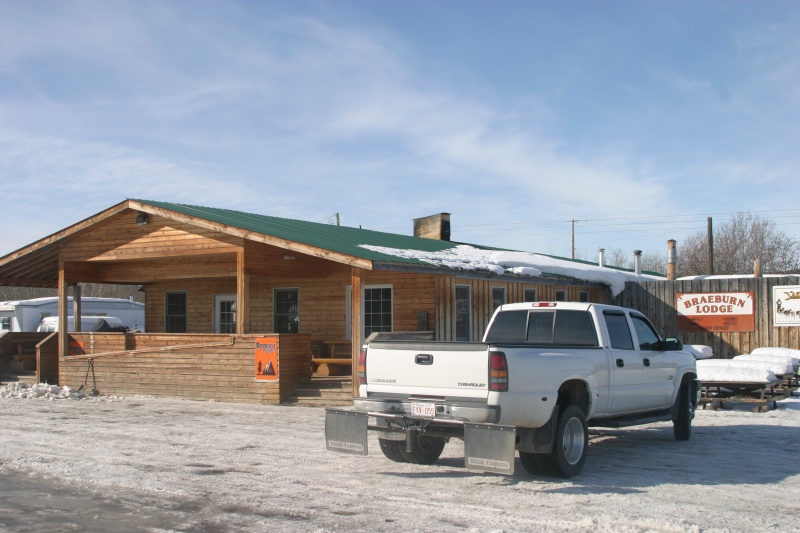 We headed north on the Klondike highway after leaving Whitehorse.  Our first stop was the Braeburn Lodge for their giant cinnamon buns.  We bought one for $9.00 …Julie’s note “Yikes!” …but were too full from breakfast to eat.  We will share it tomorrow morning and will post a picture if we remember and if our fingers aren’t too sticky. 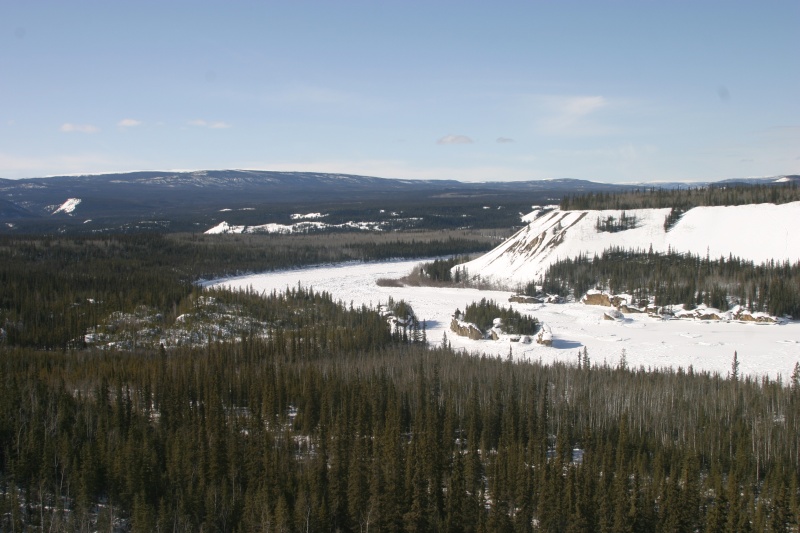 We made another highway stop at an overlook of the five fingers rapids on the Yukon River.  I think it would be better viewing in the summer when you could get a sense of the water flow around the islands but it is still quite a view in the winter. 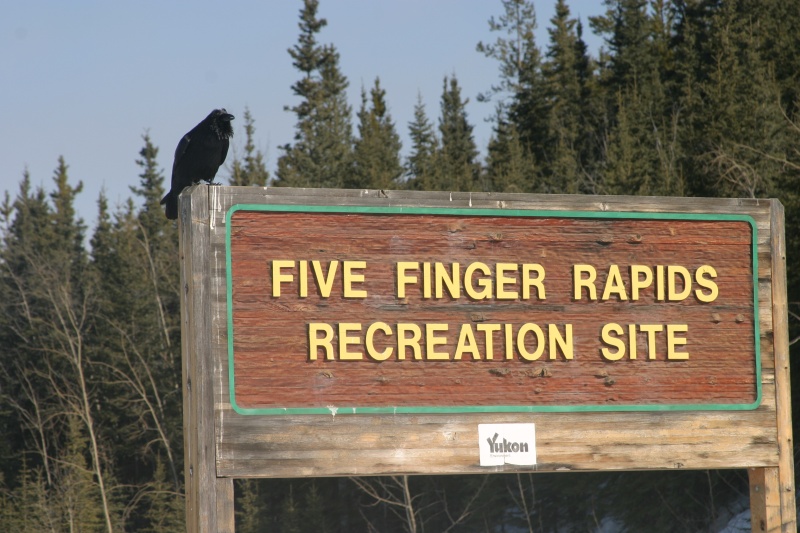 While we were stopped, there was a raven playing and making all kinds of sounds. I was able to get his picture while he was sitting on the sign. 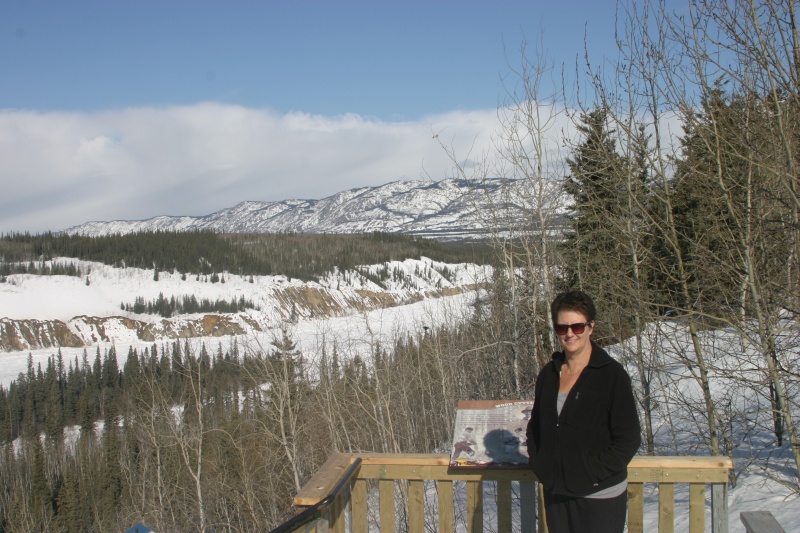 Suddenly, I heard another funny sound and spun around just in time to see an old crow. (SHHH!  She won’t read this blog will she?)  Julie notes “Hope the old coot knows how to sleep with one eye open. We have decided we would fit right in in Dawson City if we were about 25 years younger or if we grow white beards. Since we can’t make ourselves younger, beards it is. As a Holmes girl I am up to the challenge.” 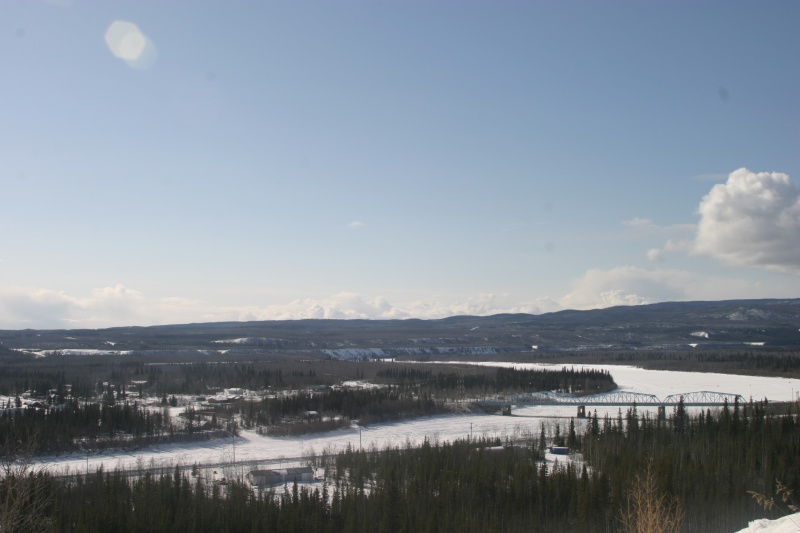 We made a lunch stop just past Pelly Crossing and had some great sandwiches at another roadside turnout – better than any subway.

After more driving through sun, clouds, and snow flurries we stopped to view the Tintina Trench at an overlook. Julie notes “I read all the points of interest signs along the way and find it all very interesting. My recall sucks though and by the time I get back to the truck I can’t remember if I read 450 …kms, feet, years, kabillion years, species of birds migrating or freckles on an arctic fox… but I do remember the name of the little white bird we have been seeing in little flocks rising up out of the ditches as we drive along… a hairy chested nut scratcher… but goes by the formal name of snow bunting. 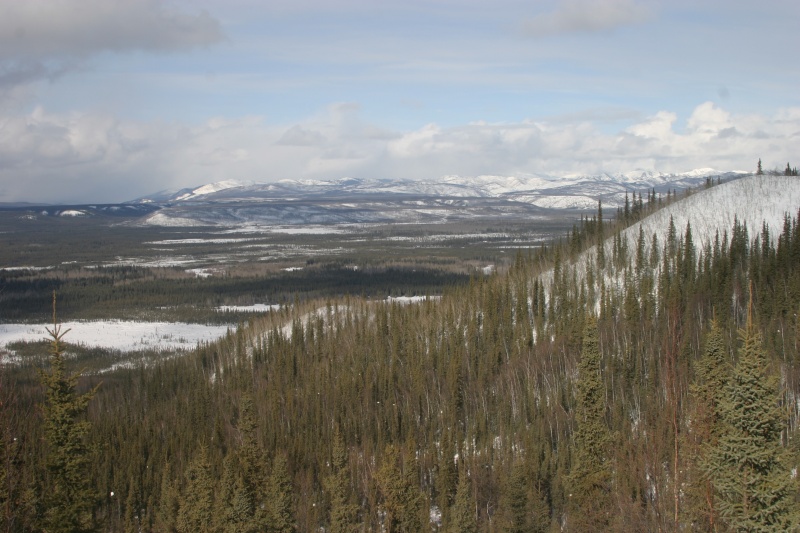 We arrived in Dawson City, YT just after 5:00 PM and checked into our hotel, the Aurora Inn.  It is very quiet in Dawson in March.  Many of the restaurants, hotels, and businesses are closed.  Probably even more so on Easter Sunday. Love the look of the old gold rush here though. They’ve worked to keep it looking authentic.

We were directed to a restaurant but it was closed so found a pub, Bombay Peggy’s for a couple of drinks and an appetizer.  There was a BBQ out on the street so we grabbed a couple of the last smokies.  It was very popular and they ran out of food and condiments by the time we got there. Julie notes “No kissing the ‘sour toe’ tonight and no, that’s not a pet name for Brad.” 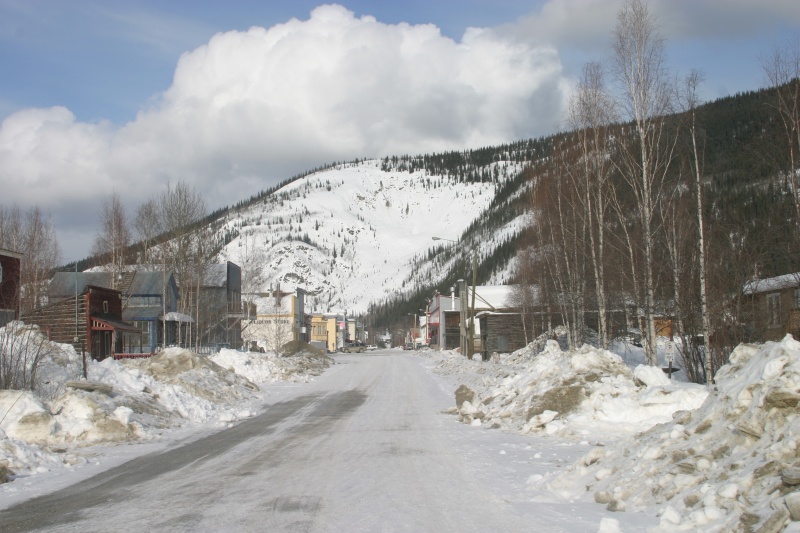 Our thoughts today are with Julie’s parents, Jim and Vera, who both have health challenges, also Julie’s Uncle Ron who broke his hip in Coquitlam, BC, and again her Uncle Herb and Aunt Lynne.  We hope they are all making improvements and wish them a speedy recovery.

…over and out from Dawson City