Today we woke up to my 6:30 AM iPhone alarm to prepare for our 7:30 AM departure. It wasn’t until we were ready to leave that we realized we were an hour early. We had changed time zones and I hadn’t reset my phone. Luckily, Julie can laugh at almost anything now! Julie notes “He is obviously confusing my pre breakdown delirium with laughter.”

We left our Granada, Nicaragua campsite and headed for our planned destination of Ojo de Agua, Honduras. Julie notes “Our guide had to make an unscheduled side trip to Managua to pick up ‘another part’ but we opted out of following him on this imaginary quest and instead people watched at our assigned gas station meeting point. We turned down the many offers of cheap sunglasses, eyeglass lanyards, 12 volt chargers and assorted wares. We wonder daily who the market is for some of the items but persistence pays and we’ve seen a few deals go down. I personally am the proud owner of a new pair of clip on shades. Oh ya!”

As per usual, there was a “show” to be had at the border area. This time we were told the large open area entering Honduras would be closed to all traffic to allow a drill team of young people to practice. I guess that was the only area large enough to allow them to practice. It didn’t affect us as our paperwork wasn’t yet complete anyways. Julie notes “My theory is, there were groups of kids from both countries meeting to practice in a mutual territory. One of the vehicles, packed to the rim with kids, the back window taped with plastic, had passed us on the way there. These beautiful teenagers in uniform had arrived in it, seemingly unscathed and tidy.” The border crossing into Honduras went really quickly but even so, we still weren’t able to make our destination before dark. We found a spot in a newly constructed Pizza Hut parking lot. As far as our parking lot camping is going, this ranked near the top as a good one. J It was very clean, well-constructed, and secure. And the food was actually quite good, especially getting a salad. Julie notes “Yes on fear of illness we have been avoiding lettuce based foods so this was a treat we hoped not to regret later. We only had one batch of the fancy medicine left and one tiny throne we would have to share if there was an issue. It would be every man for himself.”

Our Granada site on Lake Nicaragua. Julie notes “This picture makes it look quite clean and inviting. So we’ll leave it at that.” 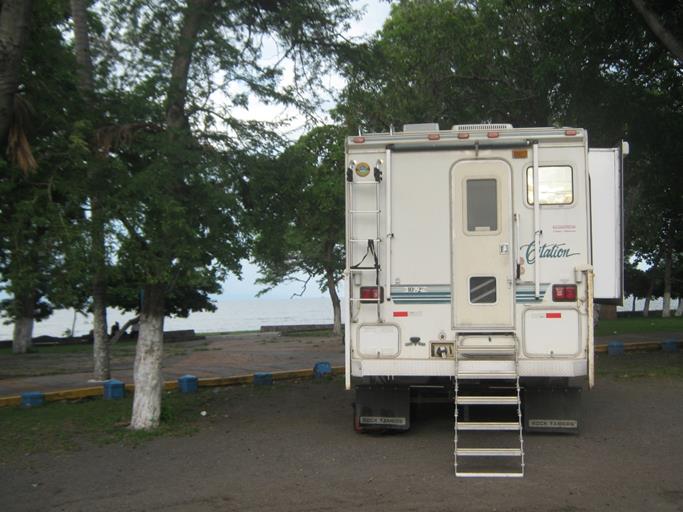 Beautiful views as we left Granada. Julie notes “The scenery is spectacular. What we have learned is to look up and beyond the ditches and roadside turn offs, etc. Despite the threat of heavy fines in some countries, garbage and litter is everywhere. So our adage is ‘Don’t look down but be careful where you step.'” 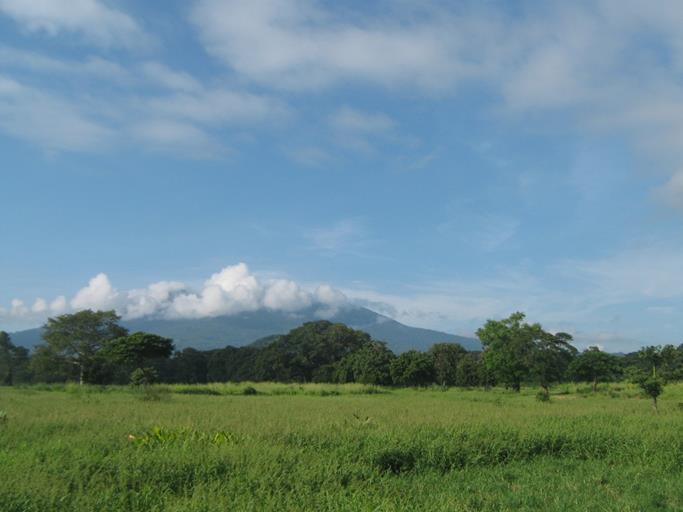 This little girl posed for us in her traditional dress. Julie notes “The people are spectacular too!” 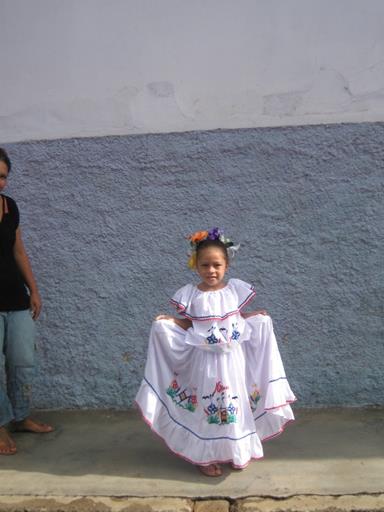 More landscape. Julie notes “This was taken during one of our numerous police checks. Seems, now that the 5th wheel is not with us, we are garnering a lot of the attention of the officials. Brad is getting quite smooth at pointing out the licence ‘placa’ under the camper, all our vehicle papers and so on. Sometimes they just want to speak a little English. I tried to confirm with the officer at this stop if these were orange trees. My pronunciation of “naranjas” might be a bit off. He had that scared looked like I was maybe trying to ‘bargain’ my oranges to get out of a ticket. He sent us on our way quickly.” 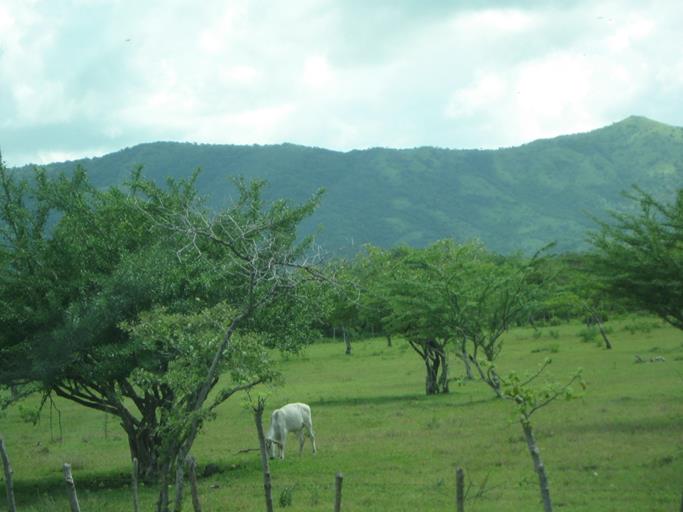 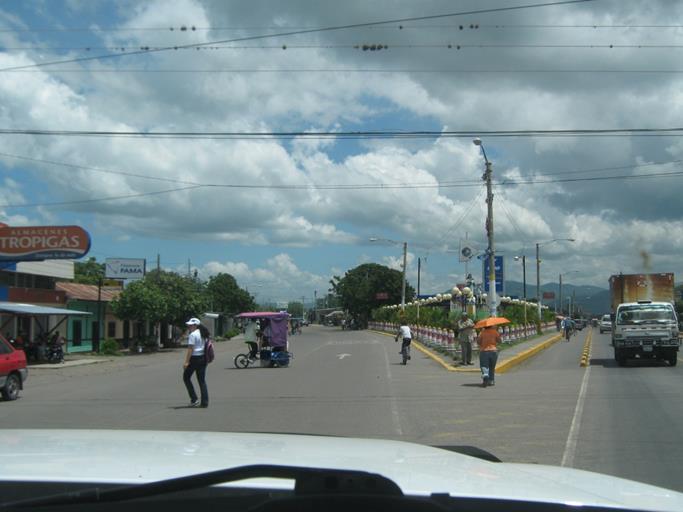 A common site along the highways – an old diesel Toyota blowing black smoke with passengers riding in the back holding on to their cowboy hats. 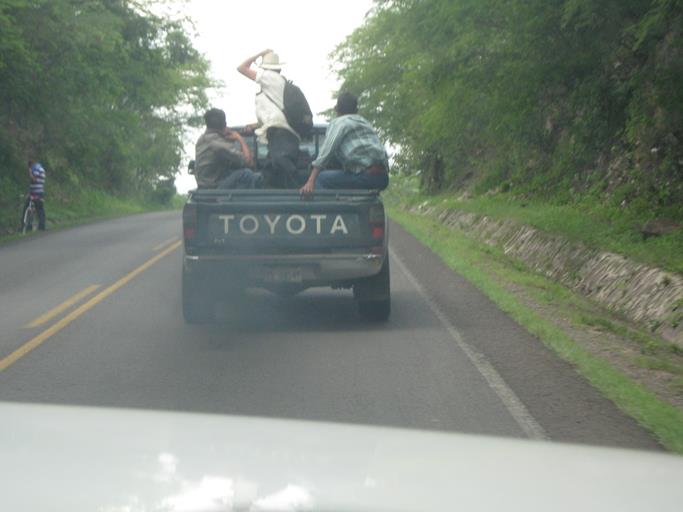 The practice area and some of the participants. Julie notes “The practice was brief and then kids headed in all directions for a break. I can’t imagine how they were going to gather them all together again in that chaos. I was just thankful I wasn’t a parent helper.” 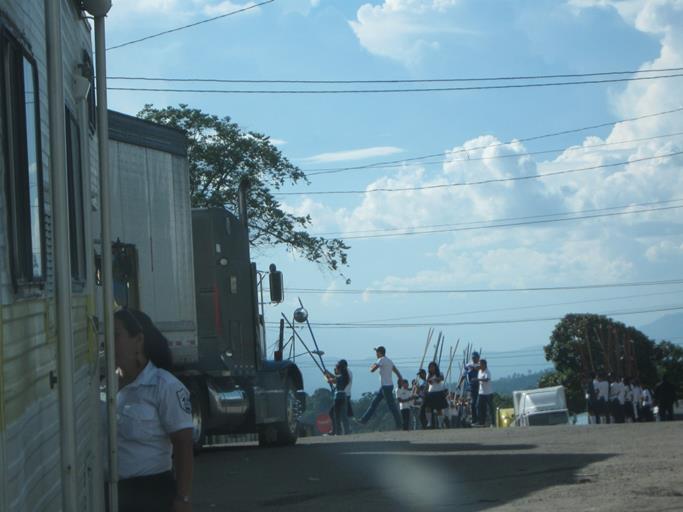 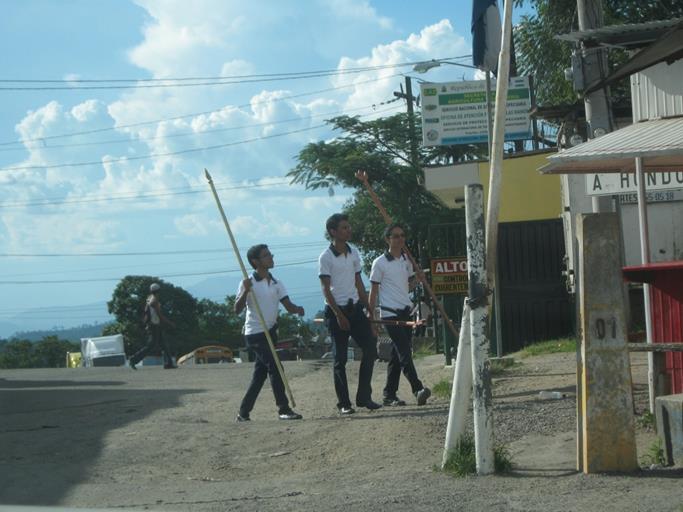 During our vehicle inspection, the customs agent opened our pantry and spied a bottle of wine and commented “Oh, 2010 Marques Casa Concha merlot, muy bueno!” I replied with a thumbs up “si”. That was his only comment. We thought that was a pretty funny exchange! And by the way, the wine was quite good. 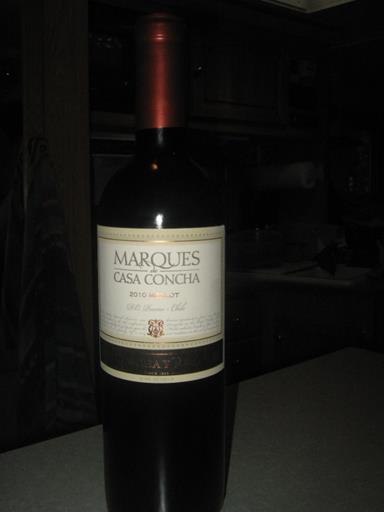 Near the end of our drive we spotted a rainbow and took that to be a good sign. Julie notes “As I mentioned the other day, we are somewhere over the rainbow. This isn’t Kansas anymore, Toto.” 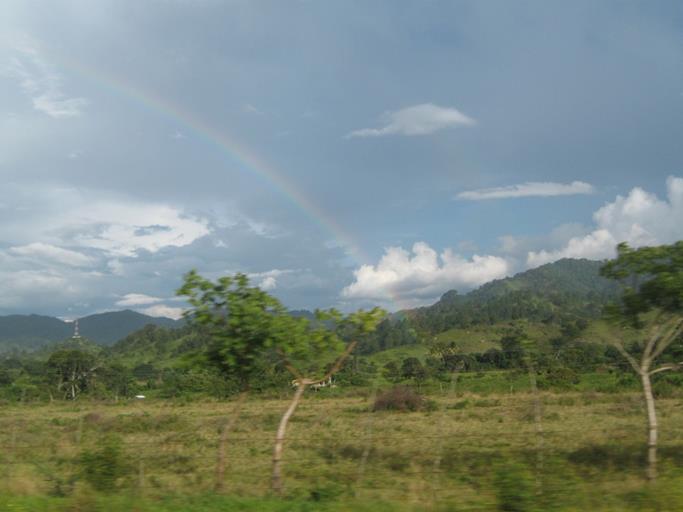