We are still in the beautiful old Colonial City of Antigua. The cobblestone streets originating from the 1600’s, the colourful one story buildings, the town squares, trees, shrubs, and flowers, as well as the markets, restaurants and shops, makes this a great tourist town. We had a relaxing day visiting the market, walking through the town, picking up our laundry, having lunch and then finishing the day with a great dinner with some new friends. Julie notes “Brad did have to make the walk to the lavenderia twice for pick up. He didn’t factor in a little Guatemalan time. He showered in the popular but rather unappealing outdoor showers available in the compound so he smelled better for the second trip (everyone was happy about that) and I made him a roast beef sandwich to keep his strength up. That’s a large load of undies or load of large undies, however you look at it, to haul several blocks. We’re never worried they’ll sell them or steal them as has happened in Canadian laundry mats, because there are no giants there requiring huge undies. Only in their Mayan myths.”

Will and Rochelle are a young couple from New Zealand travelling overland from South America to Alaska. We had a chance to visit with them and hear about their amazing adventure. They joined us for drinks and dinner at Meson Panza Verde. It was really nice to get a chance to meet some new people and we thoroughly enjoyed our evening with them. We hope to see them again next winter in Grande Prairie when their travels take them into Canada. You can follow them on their blog at http://kiwi-panamericana.com/ Unfortunately we did not take a picture of them to post but we hope to get a copy of some of their pictures from our dinner. Julie notes “No picture actually because we want to pretend we look the same age. They are really nice kids, outgoing and used to hanging out with all sorts on their travels, even old curmudgeons like us (once we had both showered). And they were very encouraging and informative about completing the South American portion of the trip at some time. And most importantly they laughed WITH us not at us. Well that one’s hard to know for sure, but it felt that way, but I’ve been fooled before. High school was unkind. Oh man! I feel more therapy bills in the future. Okay what were we talking about? Oh yes, Will and Rochelle. We are very much looking forward to crossing paths with them again. (Karen S, if you’re worried about your status, neither offered to read to me.) And also they seemed very excited at the prospect of shovelling snow.”

Our guide arrived this morning from Amatitlan at around 11:00 AM with a new master cylinder installed.

Our camp site in Antigua with our RV and our new friend’s overland vehicle that they purchased in Chile and have outfitted and modified to their needs as they travelled along. Julie notes “I think they too were a bit in awe of Brad’s unit, and even the old carpet was a luxury they haven’t seen for almost a year. We were impressed with the ingenuity and organization involved in their travel unit but I won’t be complaining (at least for a few days) about our living space. ‘Space’ being the operative word.” 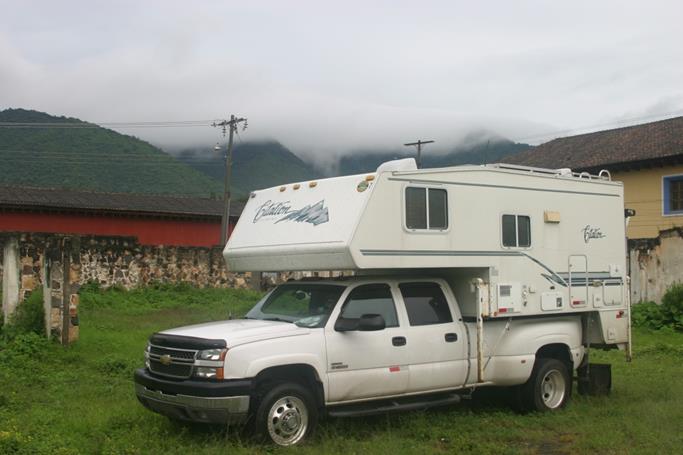 Julie notes “We are pretty jealous of the map on the side of their vehicle.” 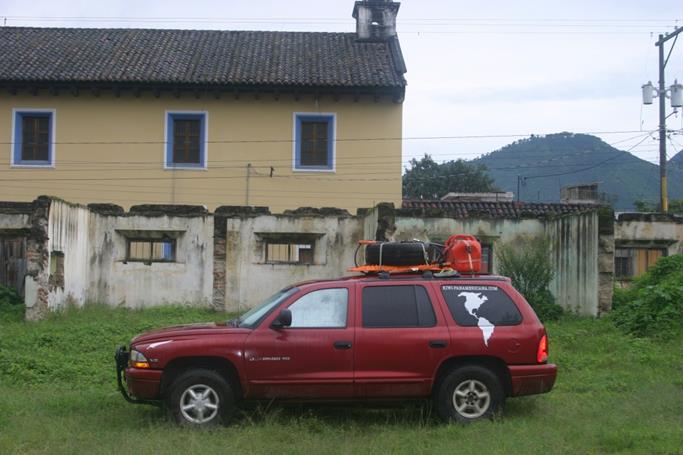 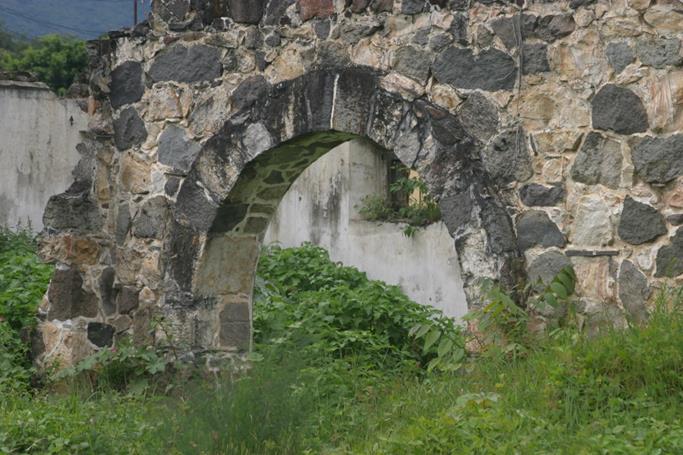 We thought a hot air balloon would launch from our camp site but instead it stayed tethered to a few vehicles and trees and then was deflated. I think maybe the wind picked up too much to safely launch. It reminded me of all the hot air balloons you see throughout the summer in Grande Prairie. Julie notes “Insert joke here about something else that is often full of hot air, and makes lots of noise when it deflates, and then laugh uproariously.” 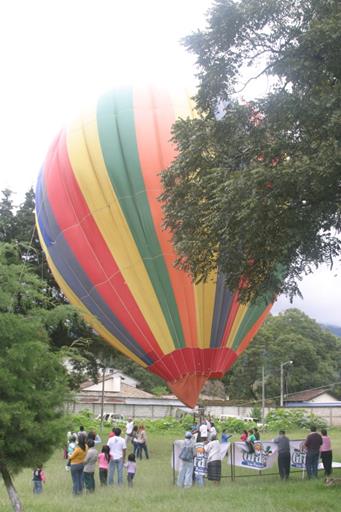 The market on a Sunday. 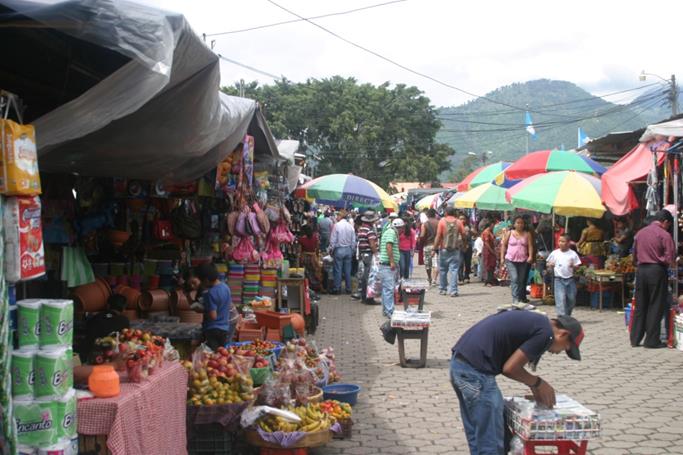 Julie notes “Blue corn tortillas, hot off the presses. And it was hot! I was back in behind them, checking out the wares sweating on their pretty things.” 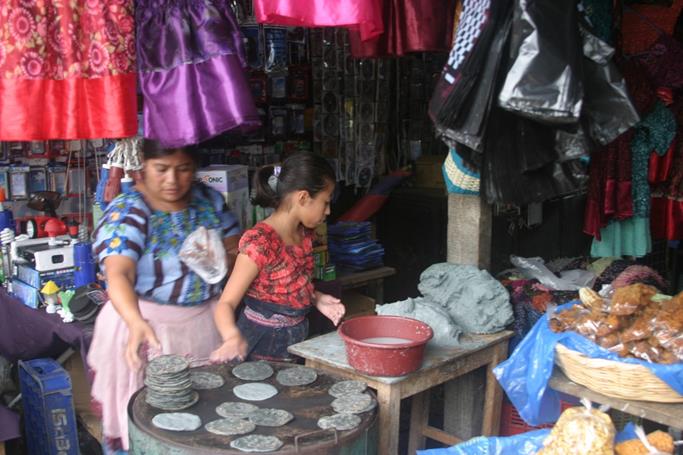 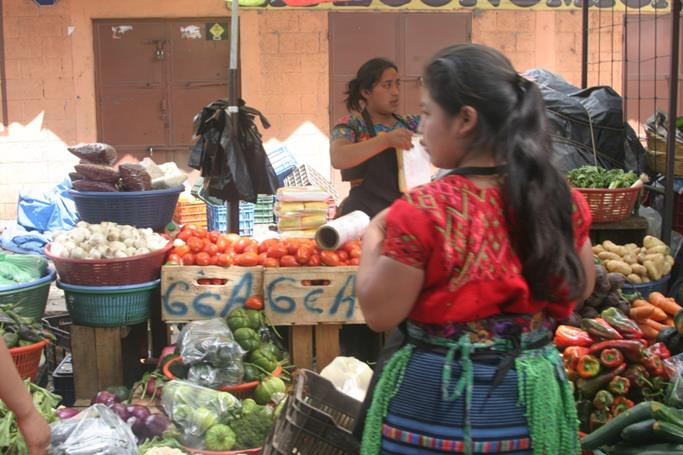 We made a deal with this tough young negotiator and based on her smile I think she was happier with the outcome than I was! J Julie notes “She was striking a hard bargain while her sister and mom (shown above) were striking the tortillas while the iron griddle was hot. But I finally got my apron after searching 5 countries for one. Now I suppose people will expect me to start cooking or selling my wares. Uh oh on both counts.” 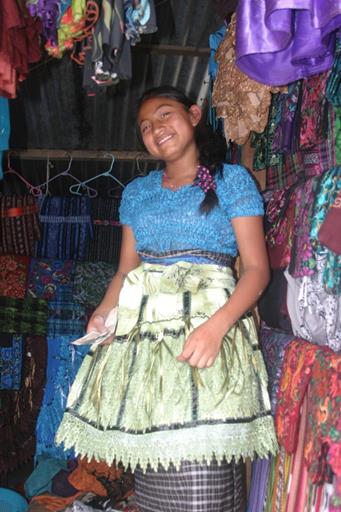 And finally, it is not hard for me to follow my wife through the streets of Antigua. I can see her well above the crowd. Julie notes “Both of these women have probably eaten a lot of guacamole but one of them has been spending way too much time sitting on her butt in a truck. I’ll give you a hint. She is the one who is as round as the other woman is tall. (Note to self – not the sidekick’s best side.)” 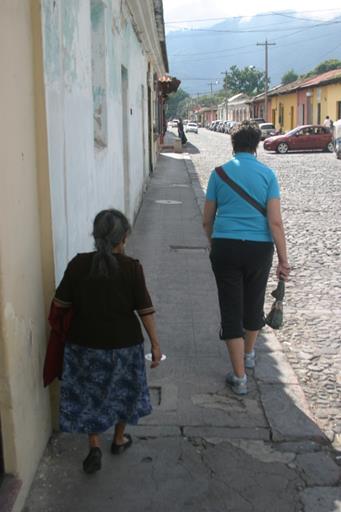 …over and out from Antigua, the muleskinner and his sidekick

Julie notes “For those of you nature lovers out there who have been waiting for updates of our latest exotic bird sightings, the Antigua campground provided us a glimpse of a few more feathery friends. And speaking of feathery friends it also reminded us of Lesson # 88 in the Central American handbook ‘No matter where you are, city or country, you are likely within earshot of a rooster.’ But back to the birds, we spotted ‘The Red Headed Fence Stone-Pecker’ not to be confused with the more common household ‘Hairy Chested Nut Scratcher’ and the Yellow Striped-Feathered Capped-Cuter-Than-Your-Average Sparrow. Previously, when we were in Tikal, Brad and everyone else in our group including the Tikal tour guide, claimed to have seen some Tucans in the trees. I was not able to verify that and suspect they were all probably looking at a Fruit Loops box that had blown into the jungle. Again we are not licensed birders but have seen people play them on TV.”

“And just one more excerpt from the above mentioned handbook, Lesson #1 (and you’ll see why it’s #1 and not #2) ‘Men are allowed to pee wherever and whenever they feel like it. In the open, against the truck, bicycle wheel, fence, house, a rock pile, restaurant wall, a blade of grass but still never, ever against the wind.’ Now as you ladies can attest, they’ve always had the leg up, so to speak, in that particular area but here they can just let it all hang out wherever. Although the shier fellows will slightly turn their head because if they can’t see you then you can’t see them, I figure. Not a condemnation. Just an observation. Well actually many observations. And probably a little jealousy. More counselling you and Dr. Freud would say.”