We made up the traveling shortfall we had yesterday. We traveled from Aguilera, past yesterday’s planned destination at a Pemex on the Auto Pista, and on to Tecolutla. How many people reading this can say they have been to Tecolutla twice? We can. Julie notes “How many people can even say ‘Tecolutla’? Okay you show offs. Now say it 3 times fast.” We arrived in Tecolutla around 2:00 PM. Julie notes “Darn I was really looking forward to staying in the Pemex gas station parking lot. They did have showers if I recall.”

We parked at the same location on the street across from the squeaky tortilla factory. It was hot again and we had no shade from the direct sun. We went with Norm to his favourite restaurant for beers and fresh large shrimp cocktails. Very large, fresh, delicious shrimp.

Julie and I then headed for the beach, rented a table and umbrella, and spent the afternoon having a few drinks, swimming, getting serenaded by guitar player/singer buskers, saying “no gracias” to the endless parade of vendors hawking their wares, and just people watching. It was a good relaxing afternoon.

Julie notes “I couldn’t eat all of my shrimp cocktail and so I had it packed to go and dropped it off at a hotel refrigerator so we could pick it up on our way back from the beach to our camper. This seemed like a great idea when we had access to our Spanish interpreter. Try explaining to the new staff that came on in between times that you have a doggy bag full of shrimp cocktail down in their restaurant refrigerator. The Windmill Man was in full tilt mode. But 6 people down the line we who happened upon the owner and we reclaimed our leftovers and most of our dignity.”

We walked down to a little restaurant in the main town plaza and had some tacos for a late supper and then meander around the square before heading back to our lawn chairs on the street trying to stay cool (obviously not trying to be cool).

Nice truck buddy. Did you pick that colour? Julie notes “I don’t know what he’s talking about. I love the trucks down here. Like everything else, very bright and colourful.” 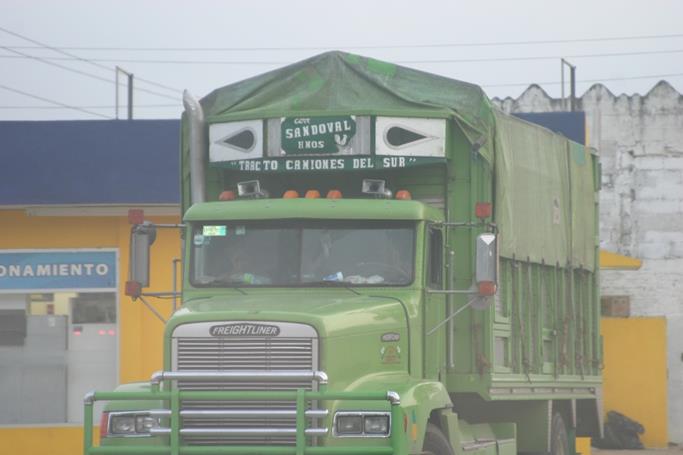 We travelled along the Gulf coast through a very large wetland area only a few feet above sea level. Julie notes “I’m pretty sure I could see crocodiles smiling and licking their lips as we drove by. Just seemed like a placed they would like to hang out in and wait for stranded touristas. Now I know how Cap’n Hook always felt.” 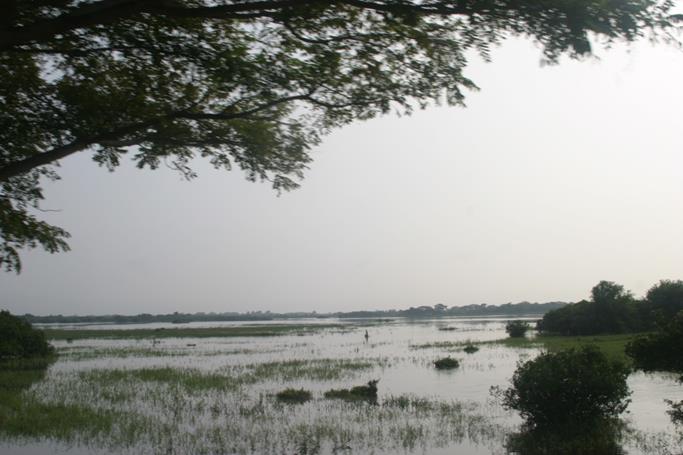 One area contained hundreds of egrets. Julie notes “Okay maybe I was wrong about the crocodiles. These guys didn’t seem too worried. I hope the egrets don’t regret their decision. (I know I used that joke before but I like it and who’s really paying attention anyway?)” 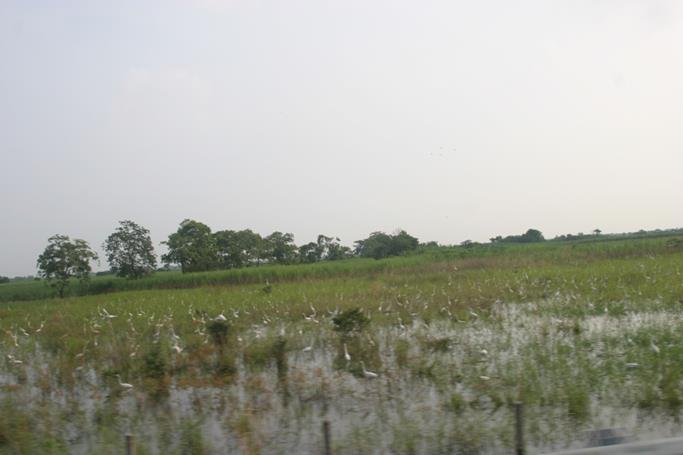 We crossed this bridge southbound and now again on our northbound trip. Julie notes “Another Deja View.” 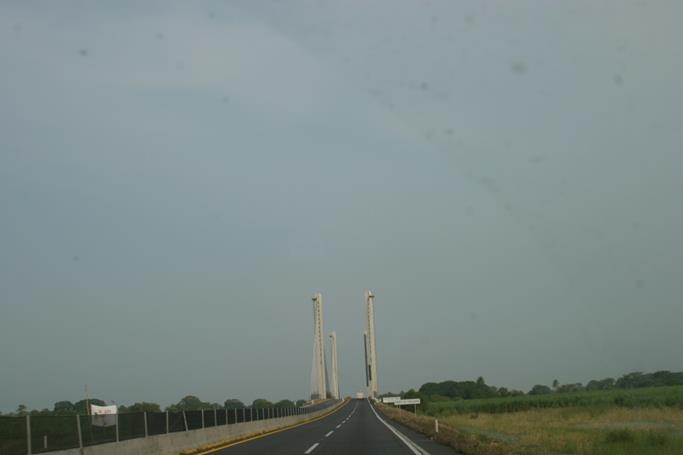 The highways today were pretty good. A few rough sections but mostly good traveling. Julie notes “We were having a very ‘Vera and Jim’ day on the iTunes and then this Veracruz sign popped up so we turned that way.” 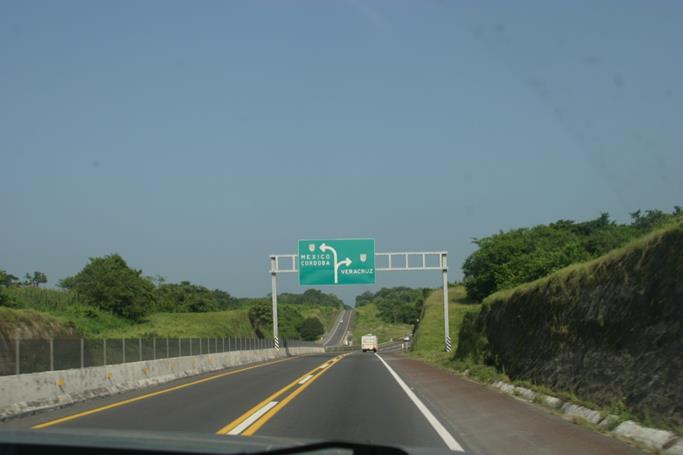 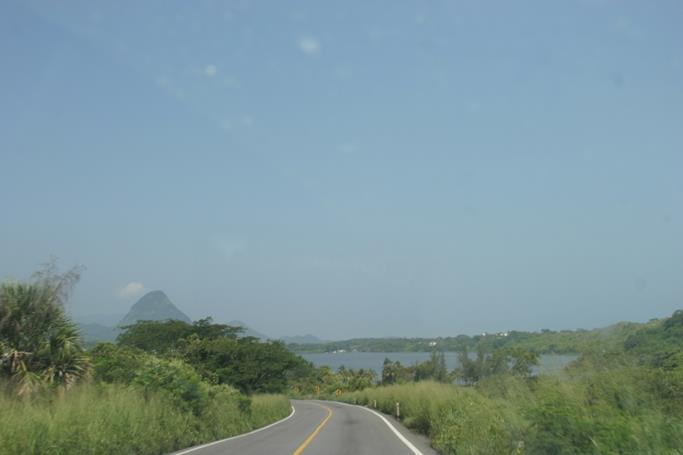 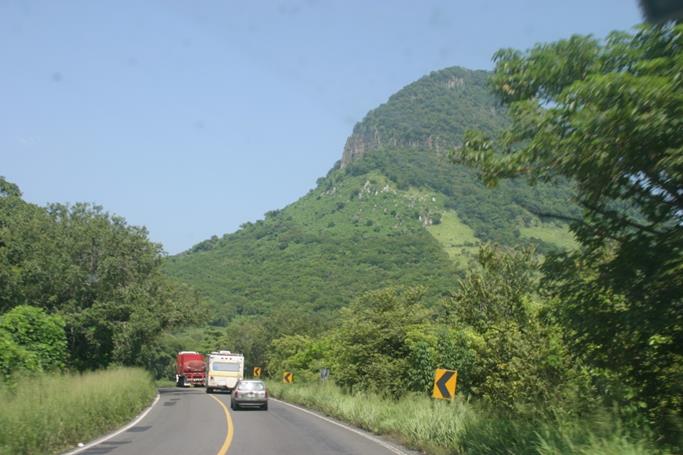 Any car, from anywhere in the world, that ends up in Mexico can be made roadworthy. Julie notes “This is one of my other obsessions. Be they called llanteras, vulcanizadora, or ‘pickyourtireouthere’ (I may have that last one a bit wrong, memory is failing me), the tire shops are on almost every corner and there is usually one right after a string of topes or a stretch of bad road. Location, location, location. They don’t vary much in appearance. This one shown here is quite fancy as they are usually just a shack with lots of tires piled around, a hammock hung somewhere and almost always a group of men, I’m assuming talking about tires, work and probably women. It seems like their answer to the pool hall. Sometimes a little food stand will be associated with it because as we know shooting the breeze and solving the world’s problems can make you hungry.” 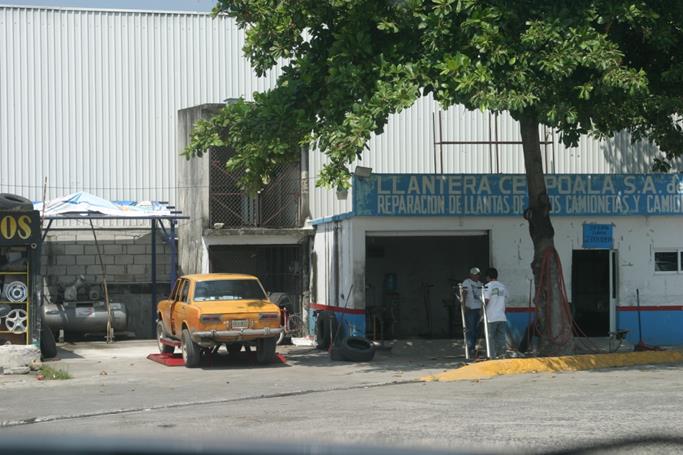 Julie’s OCD daily laundry shot. Julie notes “It’s true. If I don’t see laundry on the line I make him drive me around and around until I do. Who am I kidding? There is always a laundry shot out there but am I quick enough to get it? That is the challenge. Not sure why I like it so much. Just one of those things that ties us all together. Pun intended.” 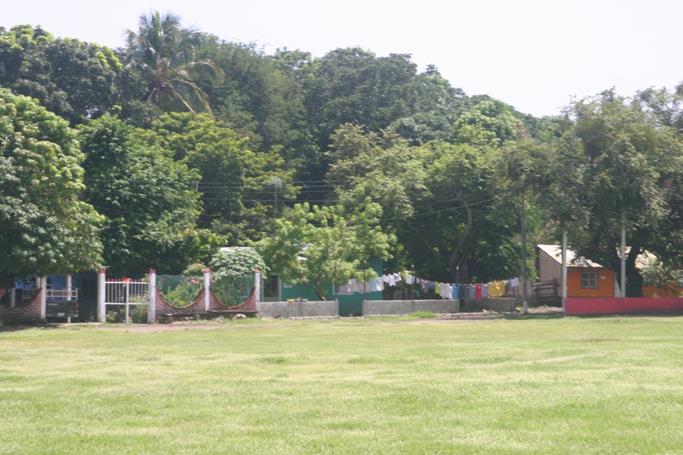 Tecolutla is a trophy fishing destination. Julie notes “Brad turn this way, toward the camera! I know what we’re having for supper! For a few days at least.” 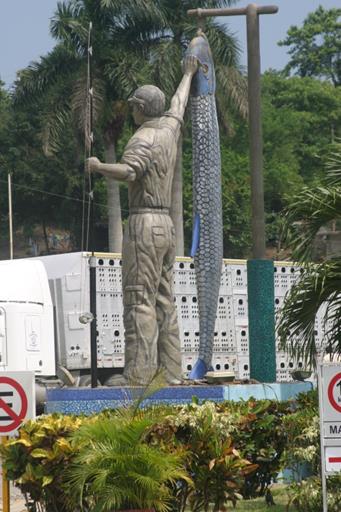 One of the buskers on the beach serenading the lady next to us. Julie notes “She was having a great day by herself at the beach. She had this guy sing to her for at least a half an hour, ordered food and drinks and bought goodies, chatted, laughed. She is my new beach mentor. Not to be confused with Beeotch mentors. I have had a few of those too. 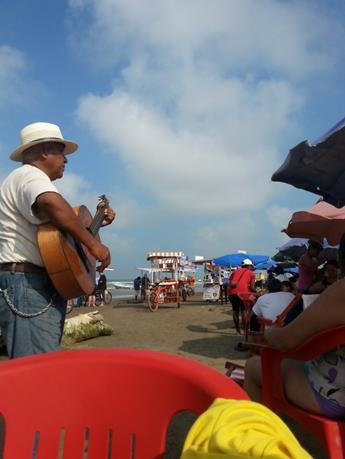 We bought a little hanging basket set for the RV to help us stay more organized. I had to use my best negotiating skills to get a good deal but again I think the vendor left happy. 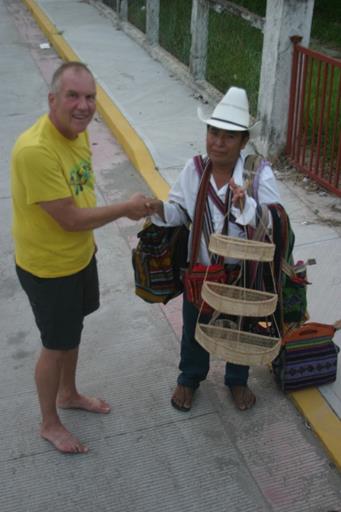 Julie notes “As I said above, this was a very ‘Vera and Jim’ day and we ended it with a wild chase in the camper, yelling ‘I thought you was a toad.’ The little toad or frog is still in there having ricocheted off my arm and into the depths of boxed items under the table. There are a few flies in the camper too so hopefully the one will take care of the other. Hope it doesn’t get out up in Canada and we cause an ecological disaster as in the ‘Bart Simpson, trip to Australia’ episode. Watch for updates on that.”