We woke up this morning in the Laredo, TX Walmart parking lot. YeeHaw! After a brief goodbye to Norm and declining a Denny’s breakfast invitation we were on our way (Julie notes “Our guide really seemed to be having some separation anxiety.”); first to find a GIANT cup of coffee with real cream, and then to San Antonio, TX. There was no Tim Horton’s but McDonald’s sell large coffee and real cream and it is quite good. YeeHaw! Julie notes “He actually jumped up and clicked his heels. And managed to not spill a drop of his precious liquid gold.”

It was an easy drive of 250 kilometres, more or less, following I-35 directly from Laredo to San Antonio. Julie notes “As we faced the highway with no backend of an ancient motor home in our range of vision, the iTunes were celebrating right along with us as it pumped out some WTF (Wow That’s Freaky) music related to our new found freedom. Right off the bat ABBA was telling us ‘Well it’s time to go, Breaking up is never easy I know, But I had to go, Knowing me, knowing you, it’s the best I could do.’ Roy Orbison followed up with his heart felt ‘it’s over, it’s OVER, it’s OOOOO-VERRRRRR!!! – budumpbump – IT’S OOOOOOOO-VEEERRRRRR!!!!!’ Then Mary Chapin Carpenter expressed our feelings perfectly when she sang ‘I feel lucky, Oh Ya, I feel lucky today’. Now the iTune shuffle isn’t always perfect. We accepted that Gordie Lightfoot was on the right track when he said ‘Alberta bound, it’s good to be Alberta bound.’ But we beg to differ with the Cowboy Junkies who sang as we pulled into San Antonio ‘This ain’t no long journey home.’ The iTunes shuffle gods were probably just checking to see if we were still paying attention.”

This proves we are back in the USA, specifically Laredo, TX. 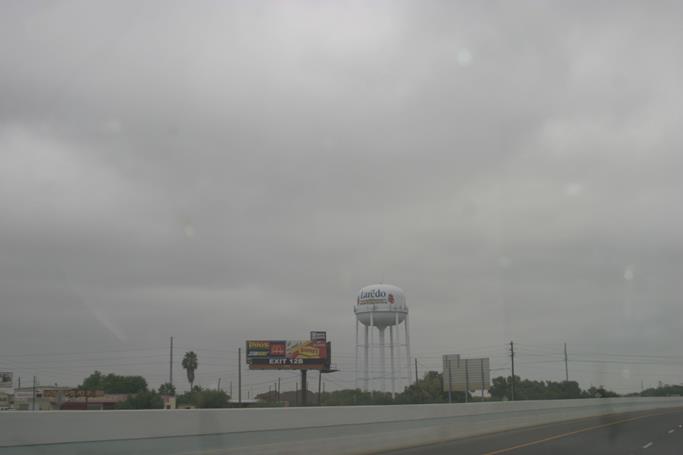 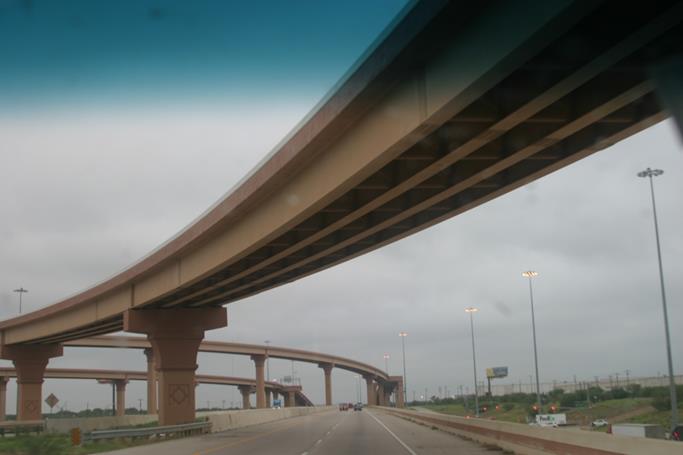 We were pulled over by the sheriff just as we arrived at Travelers World RV Park. Julie notes “Wouldn’t you know it! We had just been saying how we had passed through Mexico without any stops from law enforcement this time.” 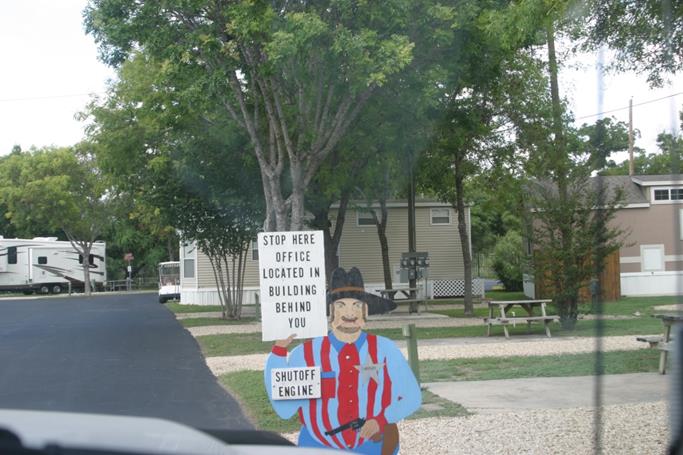 We registered at the office and got our site and then headed out for the afternoon to run some much needed errands. Julie notes “Someone forgot to mention the part about the clean laundry fairy arriving just in the nick of time so that we could wear clean nickers whilst doing all of the chores listed below. The laundry mat here is very nice and clean and air conditioned and had a TV with CNN playing. I was able to hear over and over and over again, in the couple hours I was there, about the US Government shutdown. Many people affected, least of which us and our quest for national parks and monuments. Just a little wrinkle compared to what we’ve overcome these past few months. We don’t need no stinkin’ parks. We are parking lot warriors now! (Although parks would be nice and we know that the State parks are still open.) And we hope for the benefit all those affected that an agreement is reached soon.”

We found an AT&T outlet and bought a US phone card; had a terrible lunch at the Longhorn Café (Lesson #98A: Use TripAdvisor; Do not rely on the advice of a young phone card salesman to pick a lunch spot.) Julie notes “Right after we received our cell phone card, a survey came in by text regarding the customer service we had received at the outlet. Is it wrong of me to say that Jesse might know about phones but his restaurant recommendations really suck? Let me know because I haven’t filled the survey in yet.”; found the H-E-B grocery store and picked up some food; and found an ATM to get some US cash (Lesson #98B: Do not believe your GPS when trying to find a Bank of America (the bank associated with Scotiabank) – this is the third time we have followed our GPS to a supposed Bank of America location only to find it closed, moved, or never really there. And finally, we found a truck wash to remove a few months of road grime, bugs, and ocean salt from the truck and camper. It was very much needed. 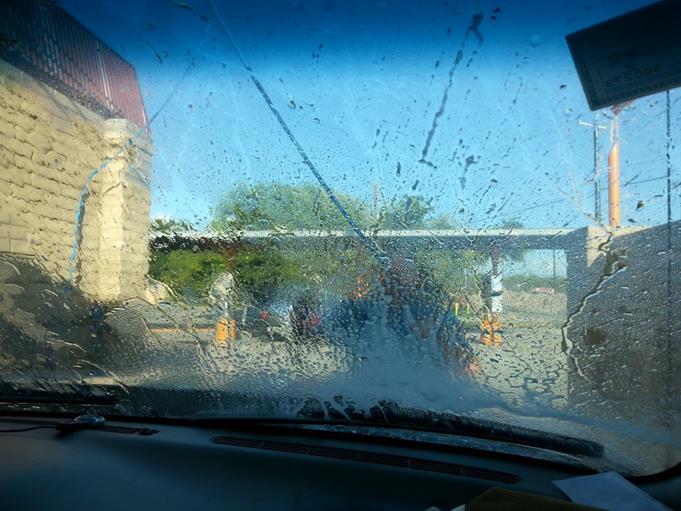 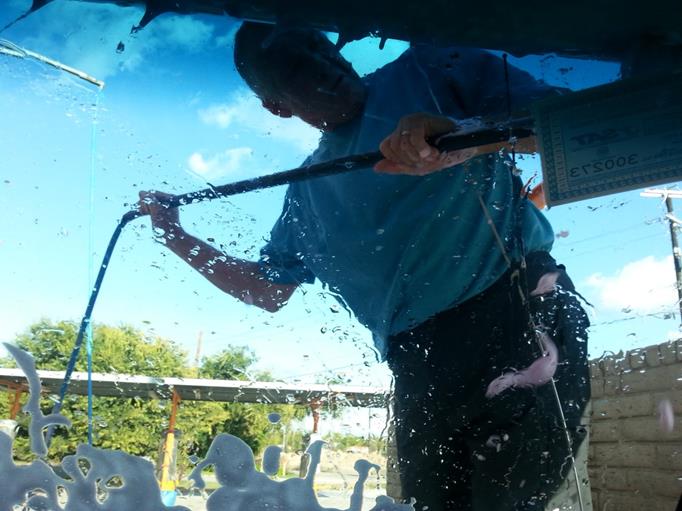 We headed back to the RV Park and had some sandwiches and leftovers. I went for a soak in the outdoor hot tub and a swim in the outdoor pool and enjoyed a real shower. Julie notes “Everyone was happy about that. I am pretty sure I still smell like a princess so will enjoy the shower experience tomorrow.”

We are really glad to be back on our own. It is a relief to be at a nice, clean, well-kept, full service RV Park where we can regroup for a few days and make plans for our next leg of this adventure. I will try to not speak of our guide in future posts until I complete a summary of our experience, once we are back in Grande Prairie. The summary will be mainly for other travelers who are thinking of using Adventuretours and Norman Yelland as a guide. I will try to be objective and point out both the good and bad. Julie notes “Just a warning, the 2 sides of the list may not be equal. I’ll let you presume which one will be longer than the other.”

Julie notes “It is very nice here. There are a few restrictions of course and one of them being that I can’t string a line of Brad’s underwear across the lot so that I can get my daily clothes line picture. Another thing missing is a fire pit. I am not sure if you remember back to a campsite near Yellowstone Park where we bought firewood but watched the fireflies and lightening show instead of making a fire. Well we have carried that wood since then, across 13 border crossings and all the mountains, cities and parking lots in between. No-one raised an eyebrow about the Windmill Gringo and his backseat box of wood. I kept saying ‘We need to get rid of that stupid wood. Why are we hauling this stupid wood? Blah, blah, blah wood blahblah blahblah.’ As we are on our last border crossing back into the US, the customs fellow opens our back door, after we’ve answered all of the pertinent questions of what we are carrying and what do we have to claim, etc. He stands up straight and says sternly ‘Where is this wood from?’ I figure ‘Here we go!’ We are going to be stopped at the US border because of this stupid wood. But Brad, still using his windmill actions even though he was speaking English, explained to the young man about purchasing it in the US and never having used it and now returning it to its homeland. The young fellow seemed to think that was a reasonable thing to do. Must be a guy thing and he let us pass the border with the backseat woodpile. So my plan now is to swing by the campground where we bought it, dump it off and see if they’ll give us a $6.00 refund since we didn’t use their product. Might not be doable as we no longer have the original packaging. If that doesn’t work we’ll take it to Walmart. You can return pretty much anything there.”