We found out yesterday that the National Park Service in the US was back in business. Our travel plans were based on whether on not they would re-open the National Parks by the deadline. Thankfully, there is at least a short term resolution and the parks will re-open. Based on this information, we packed up and headed for Gila Cliff Dwellings National Monument. Julie notes “Whoop! Whoop!”

First, however, I needed to turn on the furnace this morning so that the princess could get up in warmth and comfort. That’s just the kinda guy I am. Plus, I really needed some laundry done today. Julie notes “Now it all makes sense. And since I know he was beginning the ‘turn em inside out’ trick for his undies I was happy to oblige.” We picked an RV Park destination near Gila Cliff Dwellings that had hookups and laundry facilities; Gila Hot Springs RV Park and Vacation Center.

We stopped for fuel and a few more WalMart supplies in Silver City. Julie notes “As always WalMart is entertaining. First I picked the dejected cart, you know the one and soon realized why it was rejected as everyone could hear me coming across the whole store but they cleared the aisles for me. Then I chose the ‘less than 20 items’ line as I was legally under the limit and figured it would be faster than the other longish line-ups. Just as I plunk my last item down the little old gal running the till tells me she’ll be right back. I could see that she could no longer move at the speed that she thought she was going so I settled in to read all the magazines that are at the till. I am now up to date on who has had bad plastic surgery and which couples are on the verge of breakup. Brad will want to know all of those details. He lives for celebrity gossip. The sweet little clerk eventually wanders back with a new roll of cash register tape and we then got to know each other very well. She was in no rush so the speedy check-out line was a misnomer. She paused between scanning each item to tell me a new story. On her ticker tape mission she had run into some people she knew from the hospital where she had worked and had had a little chat and maybe I remembered her from the hospital and so on and so forth. A little reminder to slow down isn’t a bad thing and I thanked her and leisurely walked the mile and a half to the RV parked at the far side of the parking lot. Turned out to be not as peaceful as I planned as I was still driving the loud wonky wheel cart, made even louder by gravel on pavement. But again people stayed out of my way.”

The drive here from Silver City on Highway 15, known as Trail of the Mountain Spirits, is another spectacular mountain highway. No trailers over 20′ are permitted and I can see why. There are hairpin corners, switchbacks, and steep grades on a narrow highway with sheer drop offs and no guardrails. This would not be a drive my sister would enjoy! The drive is only 40 miles from Silver City but takes about 2 hours. There is an alternate route for larger RV’s. Julie notes “Beautiful place and the mountain spirits (and Brad’s careful driving) kept us on the road. This is the land of the Apache wars and Geronimo. Interesting and sad history. Also notice how we are not fighting about who chose this route? It’s obvious right?”

We found the RV Park and booked a site and then found the laundry facilities across the road at the associated store. We got the laundry started and then had a late lunch in the RV. We checked out the store and gift shop while the laundry was churning away. Julie finished up the laundry just in time for their 4:30 PM closing time and we headed back across the road to the RV Park. Julie notes “Nice, clean little laundry room. 2 washers and dryers but no chair for loitering about so I was forced to go and buy some more post cards, etc. in the little store. The store/laundry owners are clever! And Brad is now ready for another 2 weeks on the road in his Tide-y whities. I should note that while Brad thought I was slaving away over laundry, I caught him entertaining the local women who just wanted a peek at ‘his unit’ with the slide out. He had some ‘splainin’ to do.” We relaxed a bit, took a walk, and finished up some leftovers for supper with a nice bottle of wine. The weather was around 22C most of the day with clear blue skies and sunshine. Julie notes “The website promised wi-fi here but the camp host doesn’t know how to access it and the store, the hub of the campground we are finding out, closed at 4:30. City of Rocks had no cell or wi-fi service so we’re feeling a bit out of touch. Brad downloaded and searched and uploaded blogs as he was sitting in the WalMart parking lot and then we left the land of the connected once again. Hopefully we’ll get some at the store tomorrow.”

Blooming cactus at City of Rocks. Julie notes “This is called an Ocotillo. Ya I am that smart. Smart because I bought a postcard with the pictures and names of some of the plants we keep seeing. There are too many spiky and thorny things to just point and say ‘hey look at that spiky, thorny thing’. I am thinking it is named after the desert octopus that used to live in these parts prior to when they realized there was no water here so packed up their 8 suitcases and moved to the ocean. Someone might want to Wikipedia that though.” 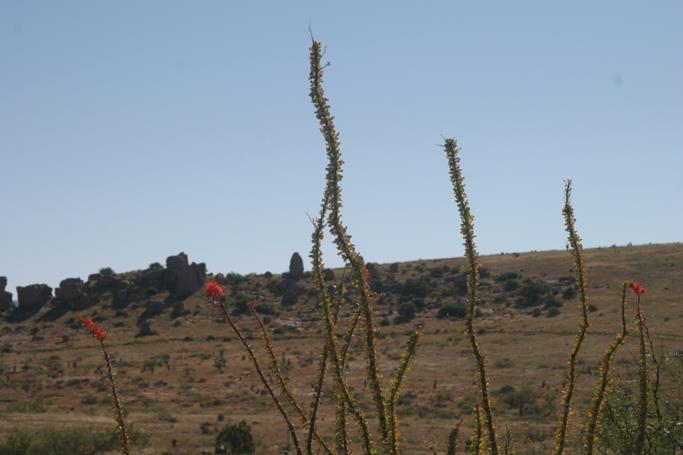 One of many windmill shots Julie took today. These windmills are plentiful here in New Mexico and many are still working. Julie notes “It was an excellent windmill day. No double windmills though dude.” 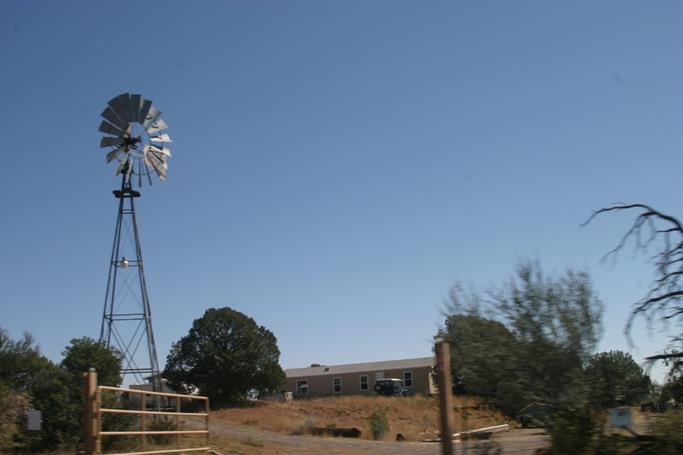 Some highway scenes along the Trail of the Mountain Spirits. 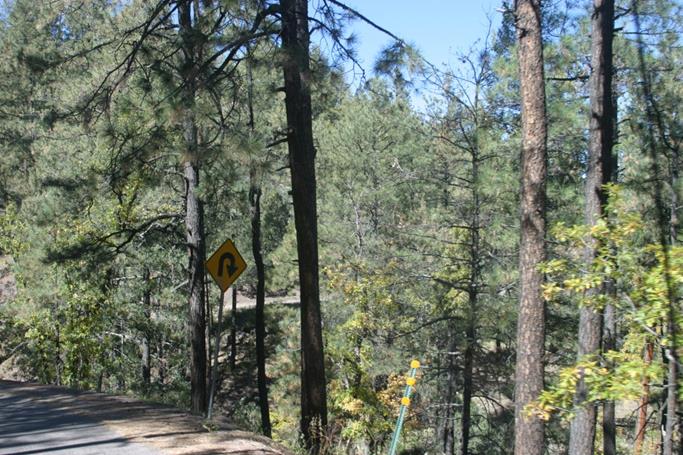 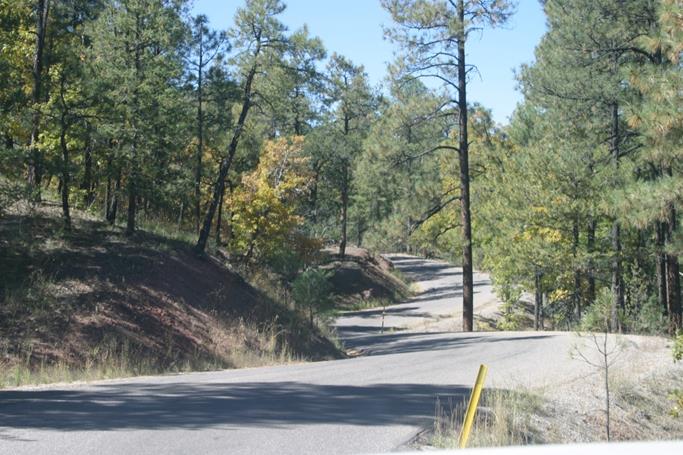 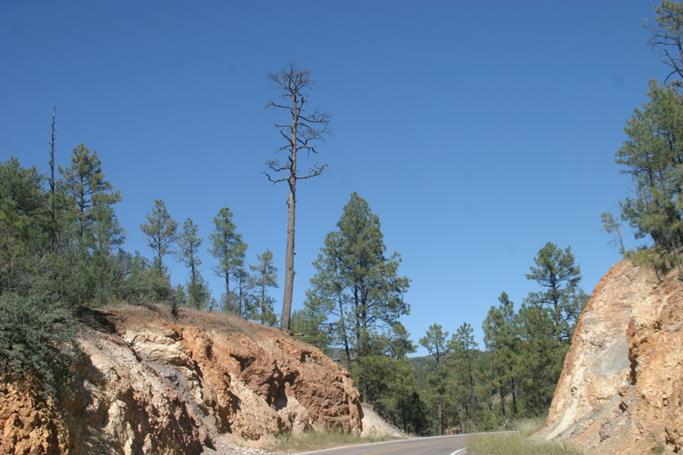 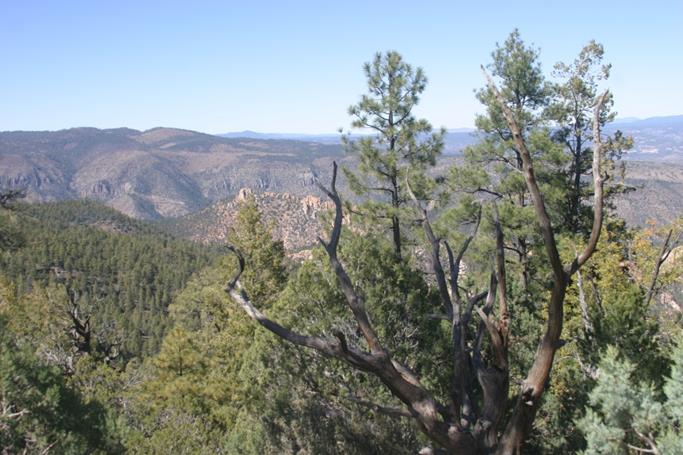 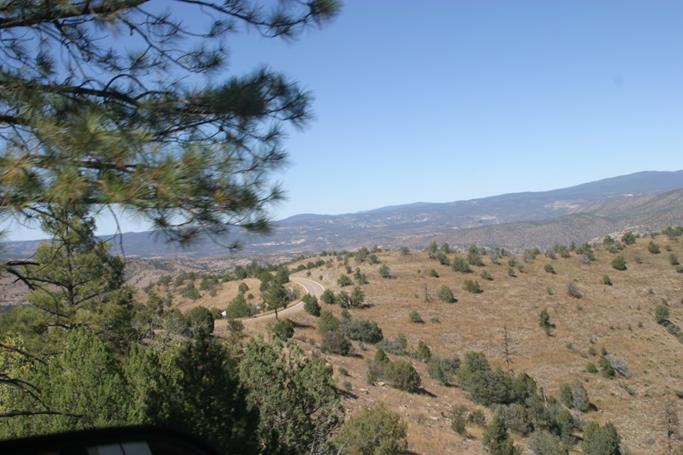 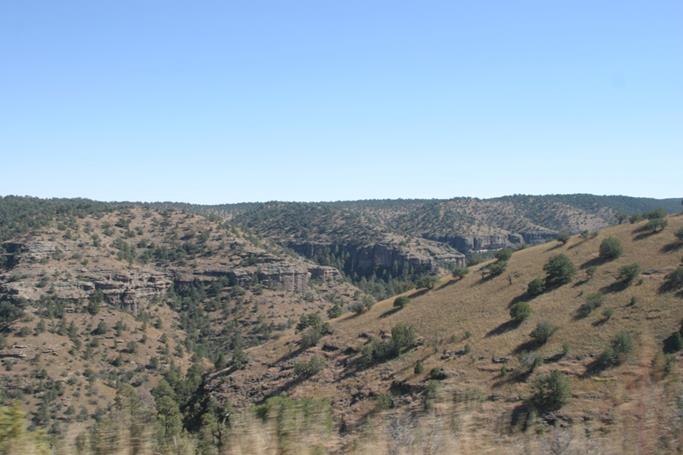 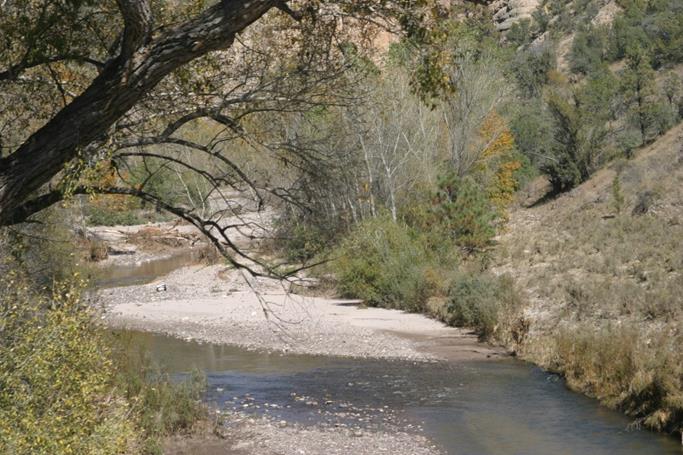 A view from out campsite at Gila Hot Springs RV Park. 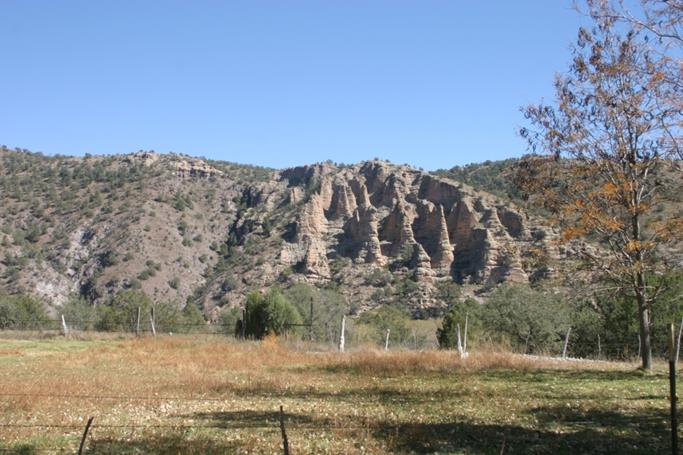 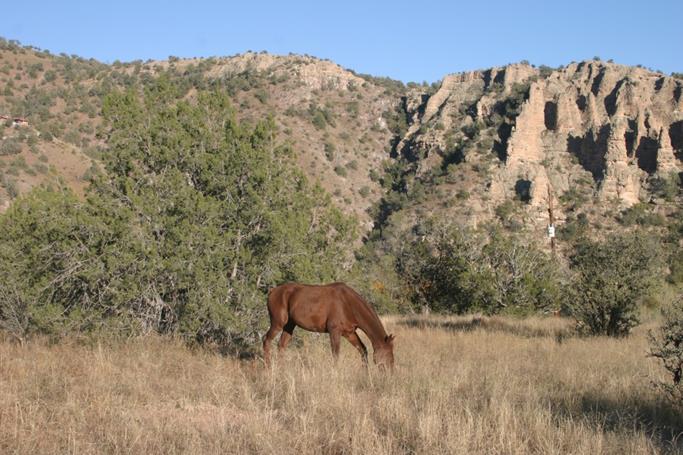 We have the site at the end of the road in the RV Park. 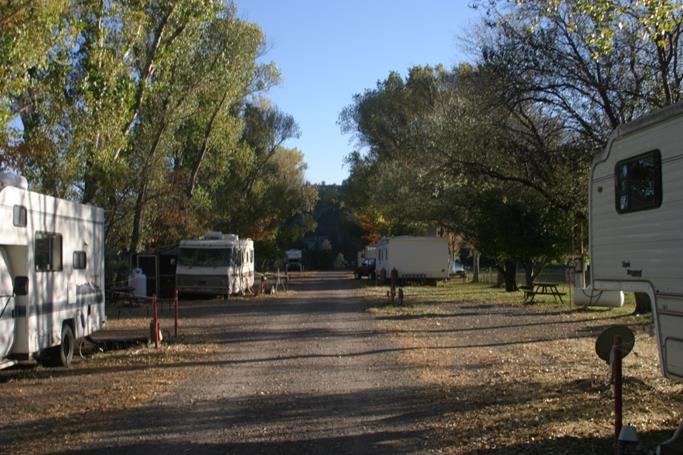 Julie notes “This one is for you Mr. Hambrook. Thinking of you as we traveled the Trail of the Mountain Spirits. Safe journey and soft landing Harry.”

1 thought on “Day 114 – Gittin’ to Gila or (depending on you pronounce it) Where the Gila are we going?”