We left our site at Lavaland RV Park after our usual coffee and breakfast routine and headed west to El Morro National Monument.

El Morro is a sandstone cliff where, mainly Spaniards, inscribed their names and dates to record their travels in the 1600’s and 1700’s. There are also a few native petroglyphs dating back 700 to 1000 years. It is quite an amazing site and has been very well preserved and the site is well developed for tourists. After viewing the petroglyphs and inscriptions, we continued the 2 mile loop trail to the top of the mesa to view some ruins. It took us close to 2 hours to tour most of the site. Julie notes “Remember how smart we had been getting of late in regards to hiking? Well we set off on this one with no water, no snacks and no sun screen but we did have hats and I had a new box of TicTacs. We would’ve had fresh breath when they found our withered up bodies. The good news is we listened carefully to the instructions on ‘how not get lost’ up on the high mesa top and arrived back at the Visitor Center safely. The hike up left us breathless as did the views from the top. I had to keep remembering to stop and look around, of course not too quickly if you recall our prior lesson on the wearing of progressive lenses on rocky cliffs.”

From El Morro, we headed east to Albuquerque passing through the El Mapais National Monument lava fields. The area around Grants, NM and these sites has about 40 volcanoes. Julie notes “We could prove this all to you but keep reading.”

We stopped for lunch at Badland’s Burgers & Tortas in Grants on our way back through. It was rated #1 on Trip Advisor for Grants. They specialize in all kinds of homemade burgers. We were the only ones there at 2:00 in the afternoon but the burgers were excellent. Julie notes “Too much good food but we ate it all up. The proof was in the pictures. Keep reading.”

We had purchased a new point and shoot camera yesterday and got it all figured out. Julie took many amazing pictures all day long, including more windmills. Julie notes “Simply spectacular in my humble opinion.” However, I inadvertently deleted them all when I was trying to clean up the memory card we had used from our old camera. Sorry ’bout that dear. Julie notes “I’m not sure which was worse, losing all of the pictures or the poor man telling me over and over again how he lost all of the pictures and how sorry he was. There were some money makers on there I’m sure. But I suspect there were mostly shots of the hood of the truck as I was in ‘learning mode’ just like our still to be officially named thermometer man. That is what I am telling myself anyway. Trying not to get my ‘El Morro’ all out of shape over it.”

We booked the RV into the America RV Park in Albuquerque, NM for 4 nights. We are storing it there for the first two nights while we luxuriate at the Hyatt Regency Albuquerque in Old Town. We will spend the last two nights, and maybe more, back at the RV Park. After checking into our room, we headed down to the restaurant/bar for some drinks and appetizers. The food here was also very good. Julie notes “You will have to imagine our delicious drinks and food because …well, you know what happened to those pictures. I did have a most delicious Elderberry Margarita and Brad tried some different beers.”

All the pictures today will be from El Morro National Monument because everything else was deleted. Sorry again honey bunch. 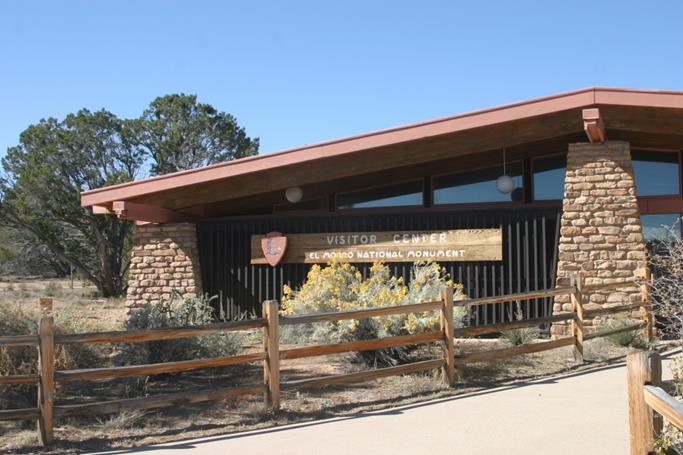 Julie notes “Yes they let these people near the National Monuments! Not much of a screening process eh? Just have to obey the signs that say ‘no loaded or unloaded firearms allowed’. If anyone one is wondering, I did wash my red purse thing that has sweated with me across all of these countries and states. It was one of those ‘Holy Crap, is that what colour it used to be?’ Tide commercial moments.” 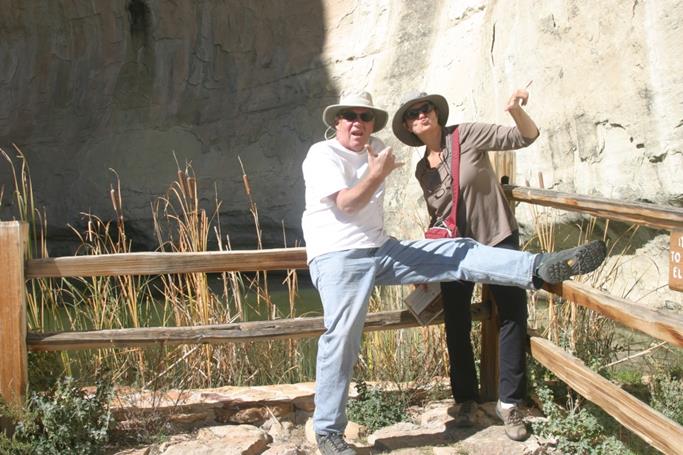 One of the Spanish inscriptions from 1709. Many were from the 1600’s. Julie notes “They really frown on you leaning over and writing ‘Brad hearts Julie’ in amongst the other inscriptions. Not that we would know about that.” 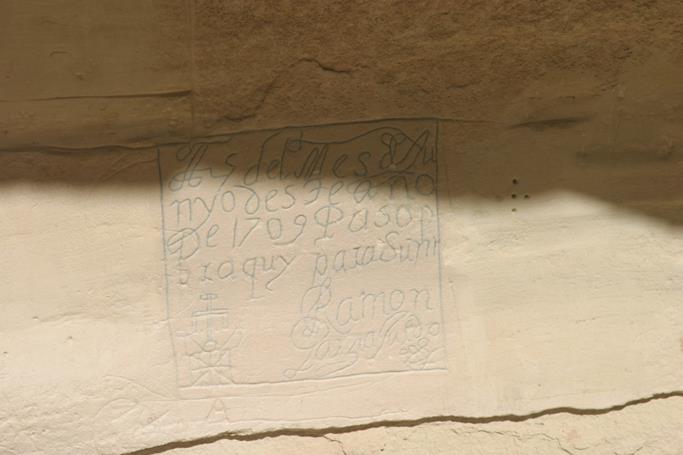 One of the petroglyphs. 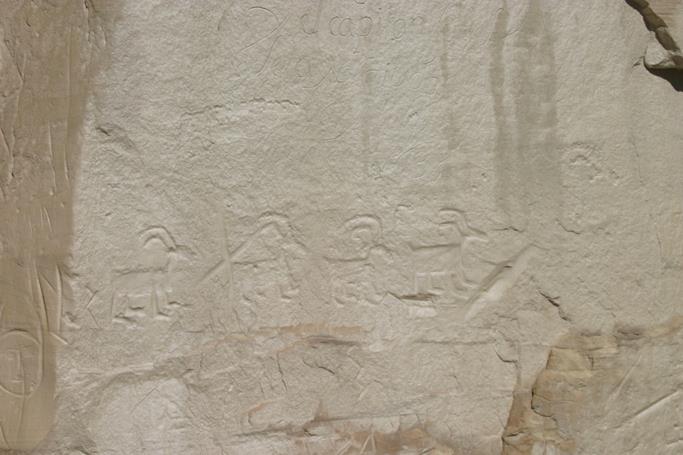 Hiking the trail to the top of the mesa. Julie notes “We decided switch backs were much easier in the dually than on foot. We blamed our panting on the elevation of over 7,000′ plus the gain of 250′ while hiking. Being old and out of shape had nothing to do with it.” 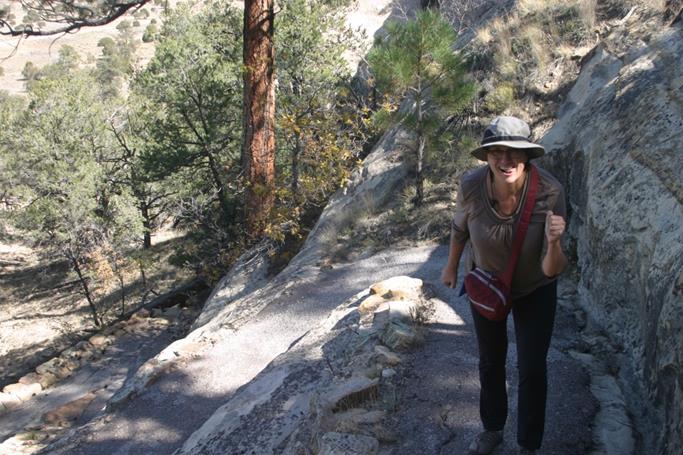 The park staff warn you to stay on the trail and now I understand why. Julie notes “Oh dear. I’ll see you down at the bottom then honey bunch, dearest.” 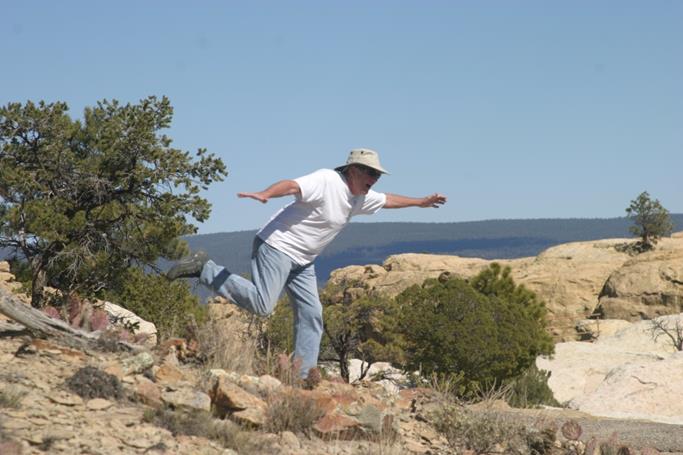 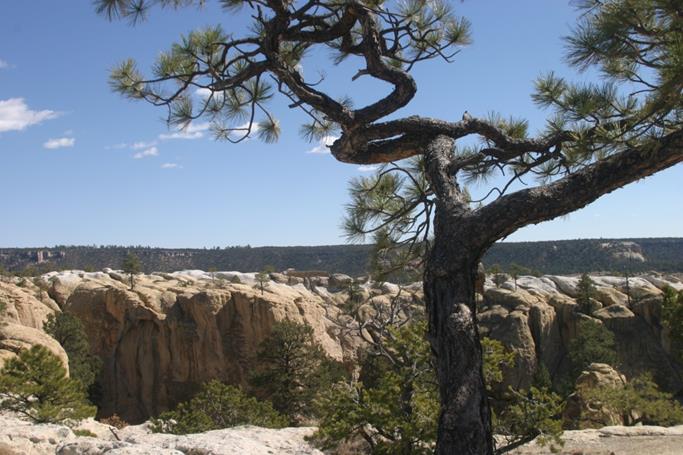 My tour guide. She reads everything and then explains it to me in simple terms. J Julie notes “Brad says, once we had reached the Visitor Centre again, that I read every sign except the important ones like the restroom signs and which way the door opens, ‘pull or push.’ Which is true. Luckily for the rangers, despite the morning coffee urgency of the situation I did not manage to ‘push or pull’ open what apparently was the staff door and eventually danced my way to the real bathrooms (with Brad’s help).” 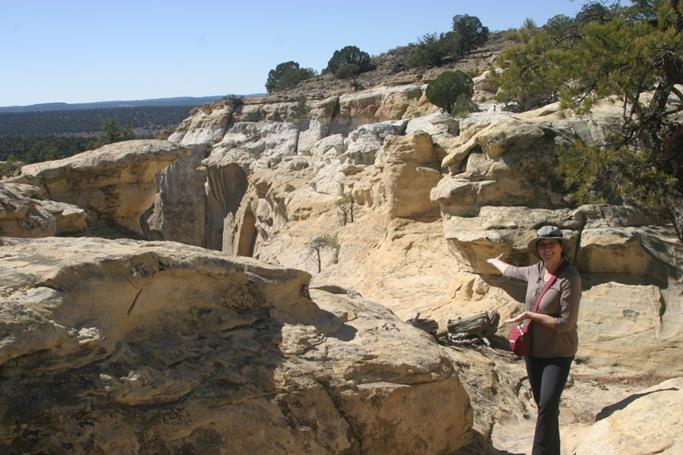 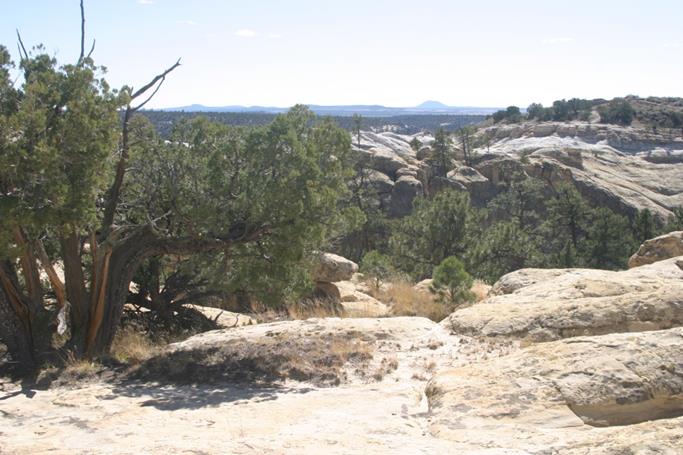 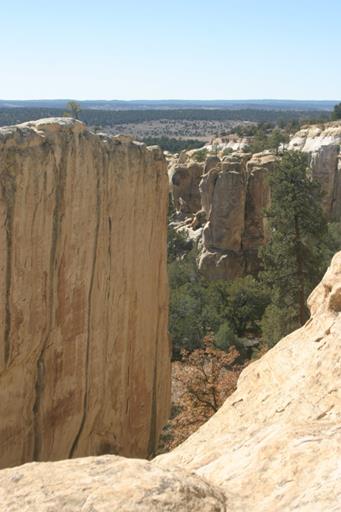 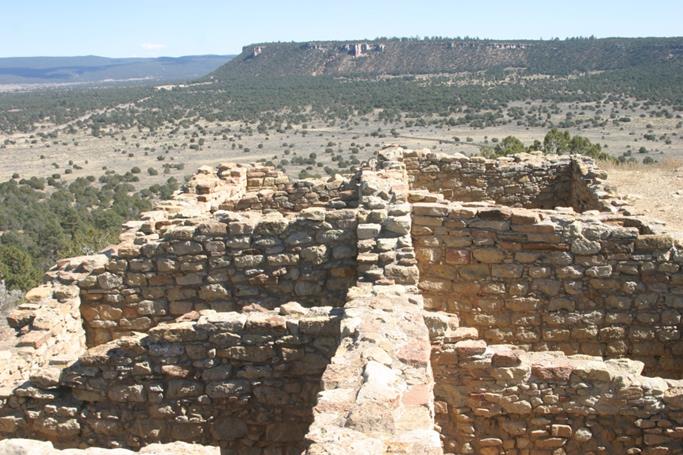 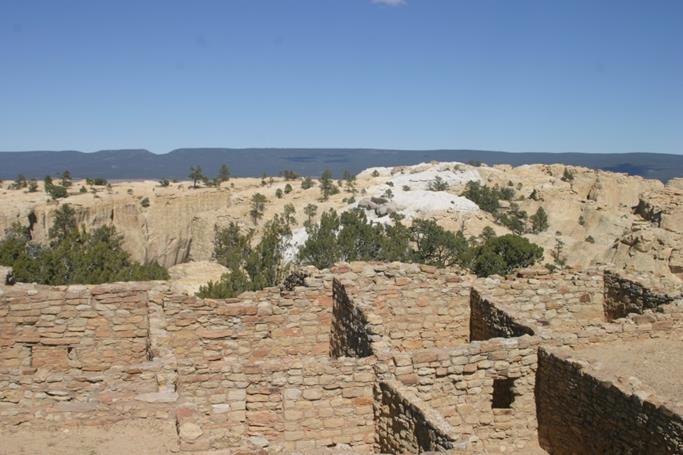 Julie notes “Ahhhhhh, a nice soak in a real tub. Heaven! I have almost forgotten that someone deleted all of my prizewinning pictures from today. The TV show selection reminded us that we weren’t really missing much in that regard. We have so far refused to ‘buy’ internet here as that seems ridiculous in this day and age but they have made this building out of some impenetrable substance that does not want to allow the flow of cell signal so we shall see.”